Prostate cancer (PC) is the second most common cancer among men worldwide [1]. Several risk factors including age, family history and ethnic origin have been identified [2]. The etiology of PC remains largely unknown. Data suggested that 30 - 40% of all early-onset PC (< 55 years) are caused by inherited factors [3], indicating the genetic factor of this disease. Hereditary susceptibility is recognized as the strongest risk factor for PC [4].

Three most abundant proteins secreted by the prostate include Microseminoprotein-β (MSMB), prostatic acid phosphatase (PAP) and prostate-specific antigen (PSA) [5]. This MSMB gene codes for protein of 94 amino acids (PSP94), a predominant protein secreted by the prostate tissue and an important candidate gene for PC. More than 40 PC susceptibility loci have been identified [6], which could explain about 25% of the familial risk in this disorder. Among these single nucleotide polymorphisms (SNPs), several genome-wide association studies (GWASs) identified rs10993994 polymorphism in the promoter region of MSMB gene [7, 8], which was significantly associated with PC susceptibility. Subsequent studies [9–18] also investigated the association between MSMB gene rs10993994 polymorphism and PC susceptibility, but with conflicting conclusions. These studies were conflicting and inconclusive probably due to different ethnic populations, clinical heterogeneity, and small sample sizes. Therefore, we conducted a comprehensive meta-analysis to explore the possible association between MSMB gene rs10993994 polymorphism and PC risk.

We yielded 58 citations after database searching. 35 citations were removed after removing duplicates and screening the titles and abstracts. 22 citations were selected for further full text review. 11 citations were excluded: 7 did not provide detailed genotyping data; 2 not case-control studies; 1 was about other diseases; 1 investigated other polymorphisms. We finally identified 11 eligible citations [8–18] including 13 studies (31,584 cases and 30,251 controls) in this meta-analysis. Selection for eligible studies included in this meta-analysis was presented in Figure 1. The characteristics of included studies are summarized in Table 1. The Newcastle-Ottawa Scale (NOS) scores of all included studies ranged from 5 to 7 stars, suggesting that these studies were of high methodological quality. All included studies conformed to Hardy–Weinberg equilibrium (HWE). 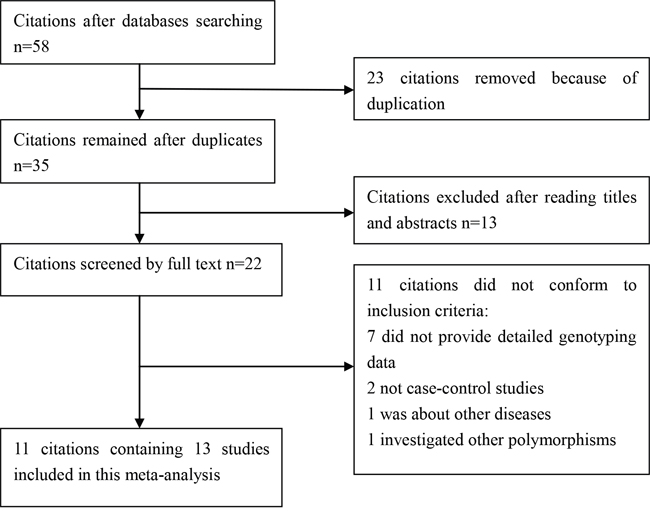 As shown in Table 2, we detected a significant association between MSMB gene rs10993994 polymorphism with an increased PC risk (CT+TT vs. CC: OR, 1.27; 95% CI, 1.14–1.41, P < 0.001, Figure 2). Stratification analyses were conducted according to ethnicity and source of controls (SOCs). Our data indicated that rs10993994 polymorphism was significantly associated with an increased risk of PC among Caucasian populations, but not among Asian populations (Table 3). As for other populations, a weak association was detected among African-Americans and mixed populations. Regarding stratification analysis by source of controls (SOCs), similar result was obtained in both population-based controls and hospital-based controls (TT vs. CT+CC, Figure 3). 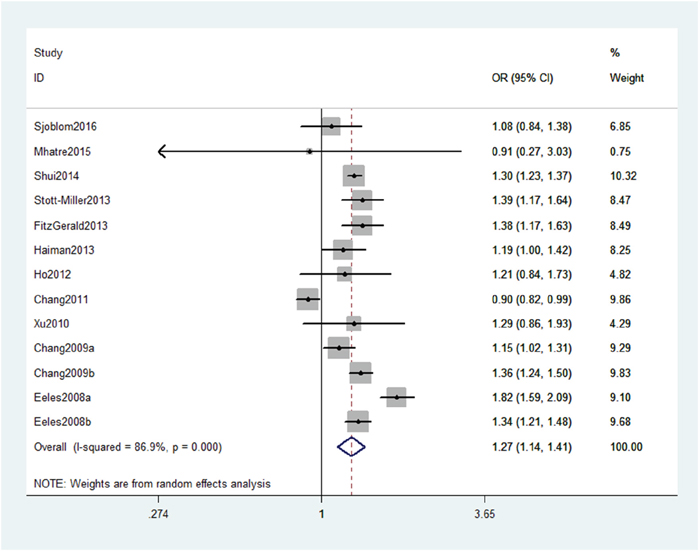 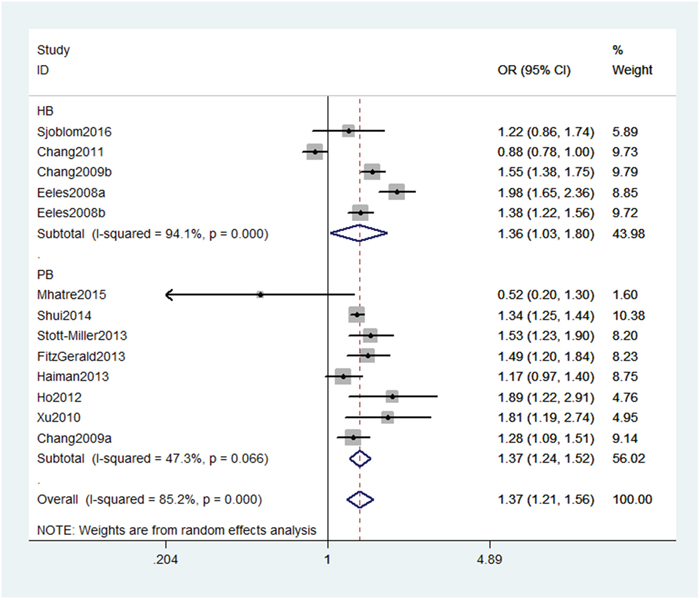 Figure 3: Stratification analyses by source of controls between rs10993994 polymorphism and PC risk (TT vs. CT+CC).

We assessed sensitivity by omitting each study once at a time in every genetic model for rs10993994 polymorphism. The pooled ORs for the effects about this polymorphism indicated that our data were stable and trustworthy (TT vs. CT+CC, Figure 4). Both Egger's and Begg's tests (CT+TT vs. CC, Figure 5) were used to evaluate the publication bias of this meta-analysis. Our data revealed that there was no obvious publication bias for rs10993994 polymorphism. Due to significant between-study heterogeneity among every genetic model, we conductedmeta-regression to explore whether ethnicity and source of controlswere the resource of heterogeneity. However, our data suggested that ethnicity and source of controls did not seem to be responsible for the heterogeneity (data not shown). 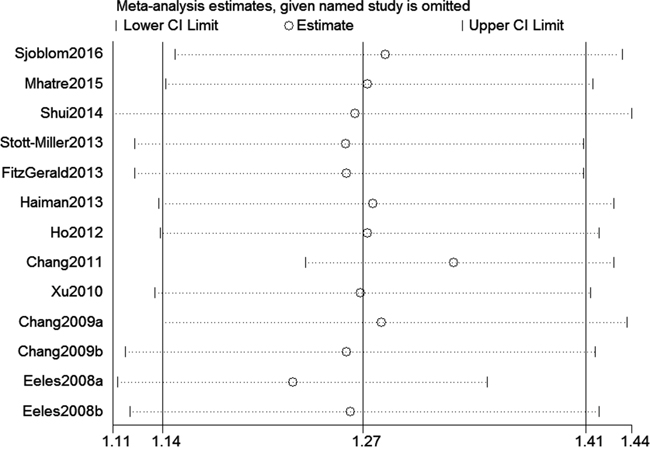 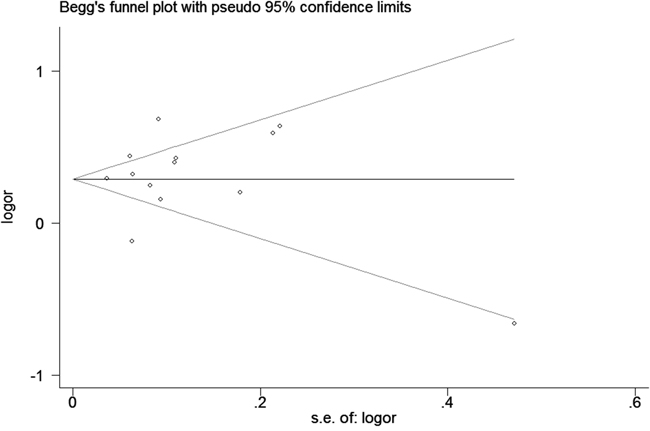 The MSMB gene is located on chromosome 10q11.2 [19]. MSMB codes for a secreted seminoprotein. This protein has tumour suppressor properties and is silent in prostate tumour tissues [20]. Over expression of MSMB could induce PC cell apoptosis and suppress prostate cancer growth, invasion and metastasis [11, 21]. Harries et al. indicated that alterations in MSMB gene expression are associated with the development of PC [4]. The SNP rs10993994 is located in the promoter region of MSMB gene. Studies [22, 23] have demonstrated that the risk allele of rs10993994 polymorphism was significantly associated with decreased expression of MSMB mRNA and protein in prostate tissues. It is reasonable to hypothesize that MSMB gene rs10993994 polymorphism plays a pivotal role in the pathogenesis of PC.

To date, many studies [8–18] explored the association between MSMB gene 10993994 polymorphism and PC risk. However, these studies detected conflicting results. To achieve reliable conclusions, we conducted a meta-analysis to demonstrate the associations between this SNP and PC susceptibility. Our data indicated that MSMB rs10993994 polymorphism increased the risk of PC. Stratification analyses of ethnicity in this study suggested that this SNP was associated with an increased risk of PC among Caucasians, while no association was detected among Asians. As for other populations, we found a weak association among African-Americans and mixed populations. Obviously, diversity inheritance of different ethnicities was presented in this meta-analysis. The reasons why their conclusions in diverse ethnicities vary are still unclear. It may be partially explained by different ethnic groups with various genetic backgrounds, small sample sizes, and clinical heterogeneity. It is noteworthy that the sample sizes of Asians and African-Americans are limited. Therefore, larger studies are needed to identify the possible association in those ethnicities. Additionally, we conducted stratified analysis by source of controls and similar positive results were obtained in both population-based studies and hospital-based studies.

We believe this meta-analysis has some strength. First, we identified 13 studies with large sample sizes including 31,584 cases and 30,251 controls. Second, sensitivity analysis indicated that our data regarding rs10993994 polymorphism were stable and dependable (Figure 4). Third, this study had a power of 99.9% to detect the effect of rs10993994 polymorphism on PC susceptibility, assuming an OR of 1.27.

However, potential limitations should be addressed in this meta-analysis. First, due to limited data, we could not perform further stratification analyses of other potential factors, such as age. Second, our results were based on unadjusted estimates for confounding factors, which might influence the final findings. Third, we could not assess potential gene-gene and gene-environment interactions. Fourth, the sample sizes of stratification analyses were limited in some ethnicities, such as Asians and African-Americans.

In summary, this meta-analysis indicates that MSMB gene rs10993994 polymorphism increased the risk of PC, especially among Caucasians. Further studies are necessary to validate whether this SNP is associated with RA susceptibility in other ethnic groups.

Literature search and criteria of inclusion

We systematically searched the PubMed, and Embase to identify studies through June 15, 2016. The following search terms were used: “prostate cancer,” “PC,” “MSMB,” “Microseminoprotein-β,” “SNP” and “polymorphism”. No restrictions were placed on the literature search. Additional initially omitted studies were identified by hand screening. The inclusion criteria of studies were as following: (1) studies that evaluated the association between MSMB gene rs10993994 polymorphism and PC risk, (2) studied on human beings, (3) study provided sufficient data to calculate the odds ratios (ORs) and 95% confidence intervals (CIs), and P value, and (4) case-control study. Exclusion criteria were: (1) a duplication of previous publications; (2) a review, editorial or other non-original study; (3) studies without detailed genotype data, and (4) inclusion of subjects with other diseases that might influence the results.

Data was extracted from all eligible studies by two reviewers. The extracted information from all eligible studies including: name of first author, publication year, ethnicity, source of controls, and genotype numbers of cases and controls. Two reviewers independently conducted the extraction of data and assessed the study quality according to the NOS [24]. All disagreements were resolved by discussion.

The crude ORs and 95%CIs were used to assess the strength of associations between MSMB gene rs10993994 polymorphism and PC risk. Stratification analysis was carried out by ethnicity and SOC. When a Q test indicated P < 0.1 or I2 > 50% indicated heterogeneity across studies, a random-effect model was used. Otherwise, the fixed-effects model was applied [25]. Pooled ORs were calculated for allele model, dominant model, and recessive model. We performed leave-one-out sensitivity analysis to evaluate the stability of the overall results. We assessed the departure from the HWE in the controls using Pearson’s χ2 test. Begger's and Egger’s linear regression test were used to detect the potential publication bias [26]. The power of this meta-analysis was calculated at a significant value of 0.05 [27]. Meta-regression analysis of ethnicity and SOC was performed to seek the main sources of the heterogeneity. All statistical analyses were performed using the Stata 11.0 software (STATA Corporation, College Station, TX, USA).

24. Stang A. Critical evaluation of the Newcastle-Ottawa scale for the assessment of the quality of nonrandomized studies in meta-analyses. European journal of epidemiology. 2010; 25:603-605.