The clinical use of the platelet/lymphocyte ratio and lymphocyte/monocyte ratio as prognostic predictors in colorectal cancer: a meta-analysis

Background: Conflicting evidence exists regarding the effects of platelet/lymphocyte ratio (PLR) and lymphocyte/monocyte ratio(LMR) on the prognosis of colorectal cancer (CRC) patients. This study aimed to evaluate the roles of the PLR and LMR in predicting the prognosis of CRC patients via meta-analysis.

CRC represents the third most common cause of cancer-related death in men and women in the united states [1]. It is estimated that 134,490 new cases will be diagnosed and 49,190 deaths will occur in 2016 [1]. Despite advances in surveillance, diagnosis and treatment of CRC, a large number of the patients are still diagnosed at an advanced stage and thus the therapeutic options are limited, resulting in a 5-year survival rate of only about 65% much lower than expected [2]. The discovery of prognostic factors is of clinical importance to guide therapeutic options and surveillance strategies. However, the prognoses of CRC patients with similar clinicopathologic characteristics vary widely due to high heterogeneity in tumor biology [3]. Currently, the discovery of prognostic biomarkers mainly depends on surgical specimens, which may not be representative of the veritable burden of CRC [4]. In addition, as many prognostic factors are evaluated postoperatively, there are still pending circulating biomarkers of early predicting clinical outcome.

Recently, there has been intense interest in the prognostic value of peripheral blood biomarkers in CRC. Inflammation has been reported to be involved in carcinogenesis and disease progression [5] and local cancer-related inﬂammation can be reﬂected by a systemic inﬂammatory response (SIR). Nearly a third of cancer patients have thrombocytosis at diagnosis and aberrant activation of platelets has been shown to be associated with CRC [6, 7]. Lymphocytes are essential components of the tumor microenvironment, which contributes to carcinogenesis [8]. Monocytes have been reported to influence CRC progression and can be used to predict prognosis [9, 10]. PLR and LMR, two representative indices of SIR, have been found to impact survival in a variety of solid malignancies [11–14], including CRC [15, 16]. As the collection of circulating inflammatory markers, including PLR and LMR, is simple, noninvasive, and easily accessible. Circulating levels of inflammatory markers have been investigated as applicable and cost-effective prognostic predictors in cancer patients [17]. Although the underlying mechanisms of altered PLR and LMR in CRC development remains unknown, numerous studies have investigated their value as prognostic factors and markers for predicting response to therapy. However, the results of these studies are conflicting [16, 18, 19]. Therefore, a comprehensive evaluation of the literature is warranted.

In the present study, this meta-analysis represents the most comprehensive and up-to-date review on the prognostic value of PLR and LMR in CRC. The results of this study showed that elevated PLR and LMR were associated with poor and favorable prognosis in CRC, respectively, suggesting that these two factors might be used as prognostic factors in CRC patients and applied in surveillance programs.

Cohen’s kappa for inter-reviewer agreement was 0.80 (95% CI=0.69 to 0.93). The literature search process is summarized in a PRISMA flow diagram (Figure 1). Initial assessment of titles and abstracts identified 346 potentially relevant publications which included 170 duplicates, 94 irrelevant studies, and 28 non-research articles. After further screening of full-texts of the remaining 54 articles, 21 papers were excluded due to insufficient survival data or for being a secondary publication. Altogether, 33 studies [3, 16, 18–48] were finally selected for inclusion. Among these studies, 22 investigated PLR, 8 studied LMR and 3 evaluated both PLR and LMR. 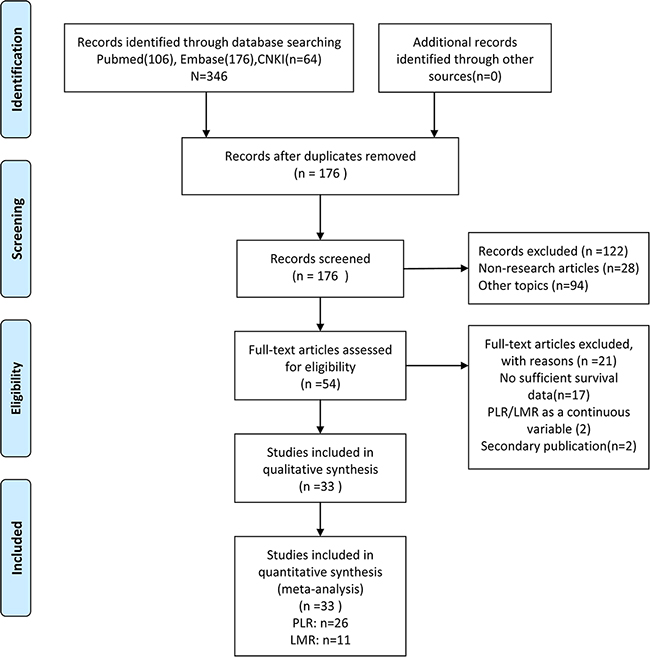 Figure 1: Flow- diagram shows the selection of literature for meta-analysis.

Table 1: Baseline characteristics of studies included in this meta-analysis

Impact of PLR on OS and DFS in CRC Patients 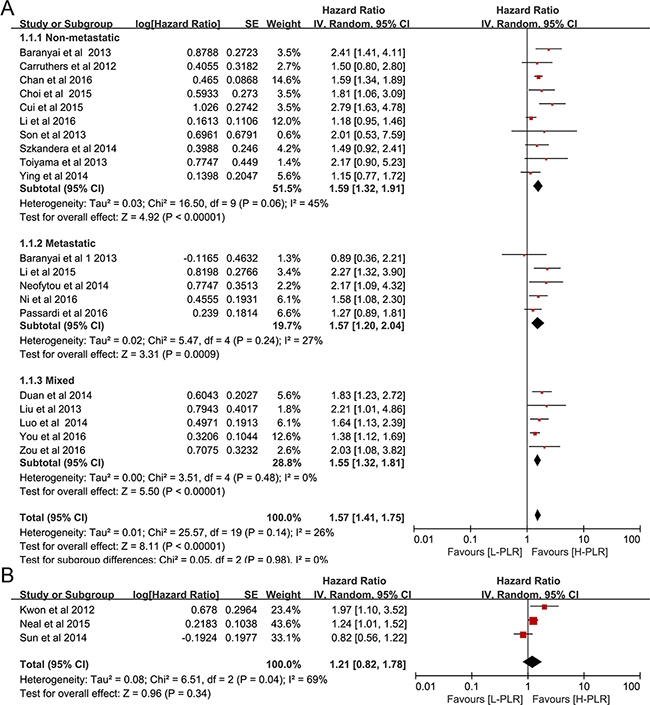 Figure 2: Forest plot reflects the association between PLR and OS. A. group 1, a single cutoff for PLR. B. group 2, two cutoffs for PLR. 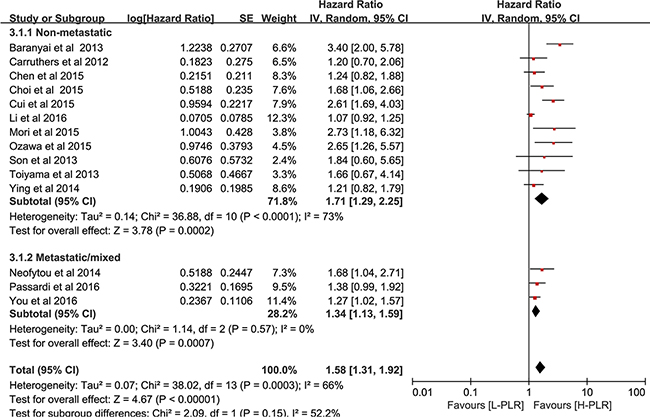 Figure 3: Forest plot reflects the association between PLR and DFS.

Impact of LMR on OS,CSS and DFS in CRC Patients 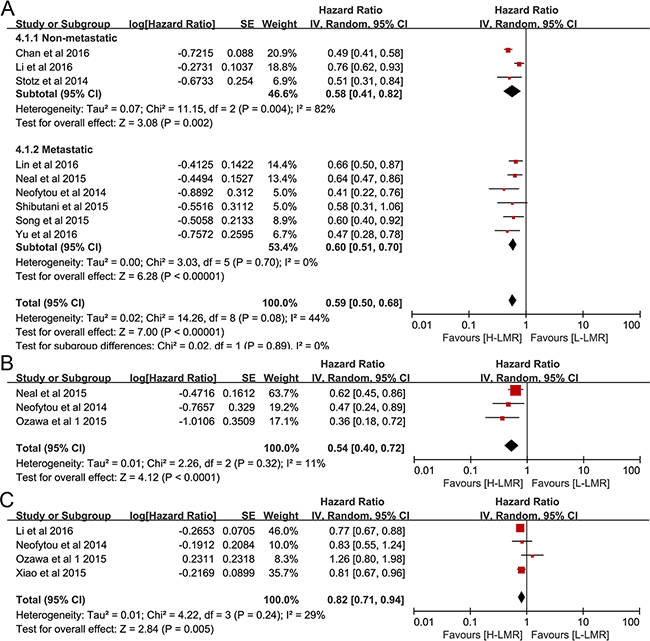 Figure 4: Forest plot reflects the association between LMR and OS. A. CSS B. DFS C.

Exploratory subgroup analyses were conducted according to geographic region (Asia and non-Asia), sample size (large and small), disease stage (metastatic/mixed and non-metastatic disease), methods for survival analysis(multivariable and univariate analysis), cut-off (≥185 and <185) and methods for determining cut-off (ROC/software analysis and referring to the previous study). However, results of the subgroup analysis for these variables did not alter the prognostic roles of PLR on OS and DFS and LMR on OS. While LMR was not associated with DFS in the non-Asian, small sample size, metastatic/mixed, univariate analysis and cut-off value≥3.0 subgroups. The difference is more likely clinically insignificant in these subgroups considering only four studies were used for this portion of the analyses. The details of the subgroup analyses are summarized in Table 2.

Sensitivity analysis was performed by assessing the potential impact of individual studies on the pooled data. As illustrated in Figure 5, pooled HR was not significantly altered when each single study was withdrawn every time. Notably, there was substantial heterogeneity regarding the impact of LMR on DFS (I2=66%); however, exclusion of three studies [31, 37, 45] reduced the I2 to 0% and did not change the prognostic significance ( pooled HR =1.39, 95% CI=1.23–1.58, p <0.001). 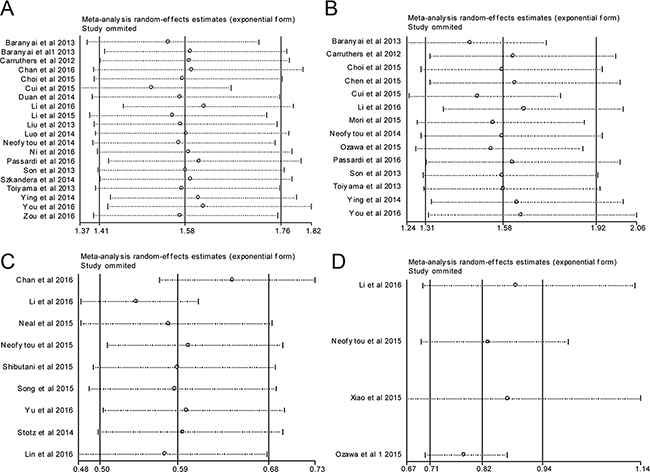 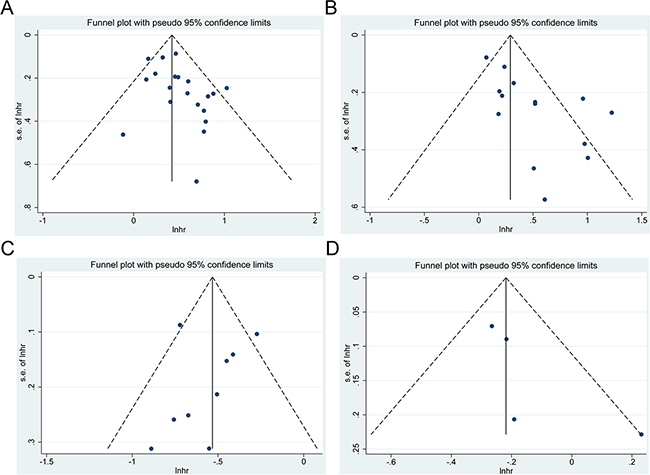 Recent studies [49–51] have shown correlation between the SIR and clinical outcomes in various cancers; However, conflicting evidence exists regarding the effects of PLR and LMR on the prognosis of CRC patients. In this meta-analysis of 33 studies which includes 15,404 cases, we reevaluated the prognostic roles of the PLR and LMR in CRC. The results of this study suggested that pretreatment PLR and LMR could be used as prognostic predictors in CRC patients. Elevated PLR was associated with poor OS and reduced DFS. On the contrary, high LMR was correlated with favorable OS, CSS and DFS. Analyses stratified by geographic region, sample size, different cut-off (≥185 and <185) and methods in determining cut-off did not alter the effects of PLR and LMR on OS and DFS.

Most of included studies (82%) were published in 2014 or later, highlighting the recent interest in investigating the prognostic values of PLR and LMR in CRC. To our knowledge, the meta-analysis is a more comprehensive update that systematically and quantitatively evaluates this topic. When assessing the impact of PLR on OS, the pooled HR of three studies which defined three risk categories (binary cut-offs) did not achieve statistical significance. This may be due to numerically lower HRs that apply per higher risk category compared with using a single cutoff [52]. We performed a sensitivity analysis, which indicated our results were robust. Publication bias was identified by a funnel plot and the Begg’s and Egger’s tests. The results revealed that studies concerning PLR and pooled OS and DFS showed publication bias, indicating that results, especially those regarding the impact of PLR on DFS, should be interpreted with caution.

The underlying mechanisms by which PLR and LMR influence the survival of CRC patients remains largely unknown. Several hypotheses have been put forward to explain the underlying biological basis. Thrombocytosis is commonly observed in cancer patients and is linked with decreased survival [53]. Platelets can release a myriad of growth factors which may facilitate cancer growth and dissemination. Orellana et al. [54] co-cultivated ovarian cancer cells with human platelets and found that platelet-cancer interactions contributed to the formation of metastatic foci. In addition, blockade of key platelet receptors attenuated ovarian cancer metastasis. Lymphocytopenia is a key component of a high PLR. Lymphocytes represent the cellular basis of cancer immunosurveillance. Compelling evidence indicates that lymphocytes induce cytotoxic cell death and inhibit tumor cell proliferation and migration, thereby dictating the host’s immune response to cancer [55]. Decreased lymphocyte counts may lead to downregulation of the immune response against cancer. Monocytes may reflect the formation of tumor-associated macrophages(TAMs), which represent pivotal components of tumor microenvironment promoting progression [56]. Furthermore, PLR and LMR are representative indexes of SIR. Aberrant SIR is considered to be associated with cancer progression. In addition, systemic inflammation can decrease organ function in cancer patients; thus, poor oncologic outcomes are observed [57].

Several potential limitations of this study should be acknowledged. First, the major disadvantage of this study was the discordance of PLR and LMR cut-offs, which lead to inter-study heterogeneity. Second, patients receiving neoadjuvant chemotherapy were included in many of the studies, which may alter the course of the survival. Third, significant heterogeneity was found in publications studying the impact of PLR on OS and DFS. In addition, several disease conditions, including liver diseases or inﬂammatory diseases, may affect PLR and/or LMR. Some eligible studies did not control for these confounding factors.

Pubmed, Embase, and CNKI were systematically searched for literature up to June 2016. The main medical subject heading (Mesh) terms and text words included colorectal cancer, lymphocyte, platelets, monocytes and prognosis. The search strategies were summarized in Supplementary Appendix. The languages of articles were limited to English and Chinese. The bibliographies of relevant articles were also searched manually for additional eligible studies. Inter-reviewer agreement was evaluated using Cohen’s kappa. Any disagreements were discussed and arbitrated by a second reviewer.

A study was considered eligible only if the publication met all of the following criteria: (a) patients were pathologically diagnosed with CRC; (b) pretreatment PLR and/or LMR and cutoff values were reported; (c) PLR and/or LMR were used as prognostic indicators of OS, CSS or DFS; (c) hazard ratios and 95% confidence intervals were reported in text. The exclusion criteria were as follows: (a) PLR and/or LMR were reported as continuous variables; (b) studies had overlapping or duplicated data; (c) non-research articles or studies that were based on animal or human cell lines; (d) publications were not subjected to peer-review (dissertations or theses).

The HR with 95% CI was directly retrieved from each of the article. Pooled HR was calculated using the generic inverse variance and random-effect model. A combined HR >1 implied a worse prognosis in the group with elevated PLR or LMR. Inter-study heterogeneity was measured by performing the c2-based Cochran’s Q test and Higgins’ I2 statistics. A P-value <0.10 and/or I2>50% indicated significant heterogeneity. Publication bias was assessed with visual inspection of funnel plots and precisely evaluated by Egger’s and Begg’s tests. A P-value < 0.05 in the Z test for pooled HR, or no overlap of the 95% CI with 1 was considered statistically significant. This study adhered to the PRISMA guidelines and all data analysis was performed using Review Manager 5.2 (Cochrane Collaboration, London, UK) and Stata 12.0 software (Stata Corporation, College Station, TX, USA).

In summary, pretreatment PLR and LMR could be used as prognostic predictors in CRC patients. Elevated PLR was associated with poor OS and DFS. In contrast, high LMR correlated with favorable OS, CSS and DFS. Further studies are necessary to confirm these findings and elucidate the underlying biology.

This work was supported in part by grants from the Natural Science Foundation of Shaanxi Province (2016JM8035).