MicroRNAs, as the core component of the post-transcriptional regulation machinery, play important roles in many biological processes like cell proliferation, differentiation, stress response and apoptosis [1]. Accumulating evidence has suggested the wide associations between deregulation of intracellular microRNAs and complex diseases like cancer, cardiovascular diseases and metabolic diseases [2–5]. Moreover, the microRNAs presented in the blood, also known as circulating microRNAs, were recently proposed to be promising biomarkers and targets for the disease diagnosis and therapy [6–9]. For example, elevated expression of miR-21 in venous plasma was observed in patients with non-small-cell lung carcinoma and gastric cancer [8]. By comparing the venous plasma microRNA expression profiles from patients with Takotsubo cardiomyopathy or acute myocardial infarction, miR-16 and miR-26a were found to be highly expressed in Takotsubo cardiomyopathy patients, while miR-1 and miR-133a were highly expressed in acute myocardial infarction patients. These microRNAs, when used in combination, were proven to be an accurate biomarker for discriminating these clinically indistinguishable, life threatening diseases [9]. Finally, by comprehensive profiling of blood microRNAs from 454 individuals, the deregulated circulating microRNAs across 14 disease situations (including but not limited to lung cancer, pancreatic ductal adenocarcinoma, melanoma) were screened and demonstrated [7].

However, it is noteworthy that most current circulating microRNA biomarkers were discovered in venous blood samples, and the arterial blood samples remained unexplored, partly due to 1) As for the clinical reality, the venous blood sample is used for most cases since it is safer and easier to obtain; 2) As for the biomedical researchers, there is an intuitive, yet non-validated assumption that the microRNA profiles in arterial and venous plasma should be identical. In this study, we examined whether microRNAs were uniformly expressed in matched arterial and venous plasma samples from three healthy male rats using microarray technique (Figure 1). Surprisingly, 24 differentially expressed microRNAs were identified between two groups of plasma samples. The function and disease associations of these microRNAs were analyzed. Finally, we found arterial expression profile of microRNAs exhibited significant positive correlation with tissue microRNA expression profiles, and such correlation was at least comparable to the correlation between venous microRNA expression profile and tissue microRNA expression profiles. MicroRNAs showing enriched expression in specific tissues were also presented in arterial plasma. These results indicate the potential of arterial plasma microRNAs as novel biomarkers for disease prevention and therapy. 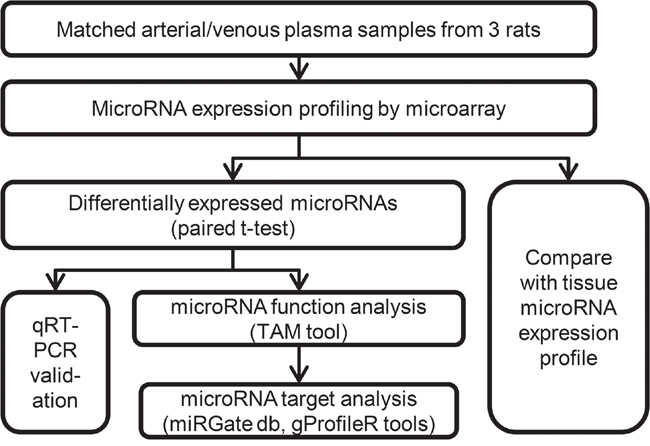 Figure 1: Flow chart depicting the pipeline of this study.

* MicroRNAs differentially expressed between two groups were identified by paired t-test with the P-value cutoff of 0.25. Differentially expressed microRNAs were sorted by P-value. For each microRNA, the fold change was calculated by comparing the mean normalized expression value from one group against that from another group.

** Whether this microRNA showed consistent higher expression in one plasma sample group compared with the matched samples from the other group.

*** This microRNA has no human homolog. 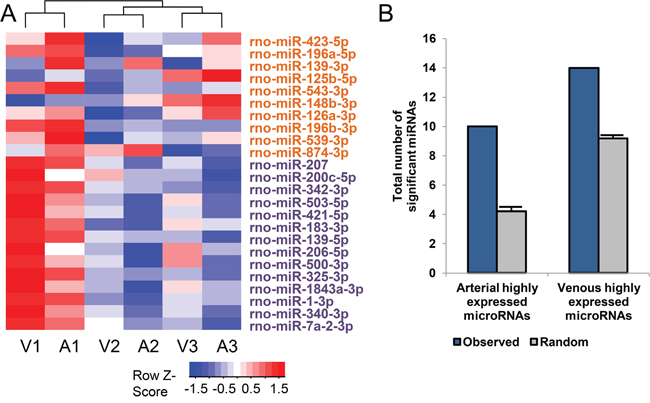 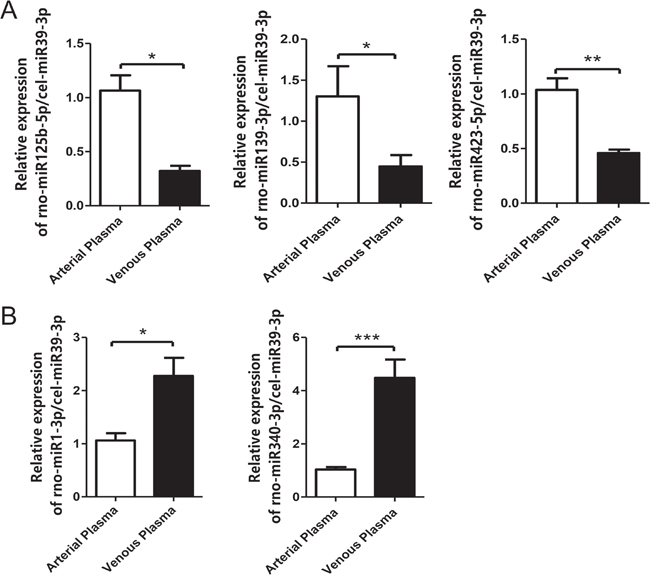 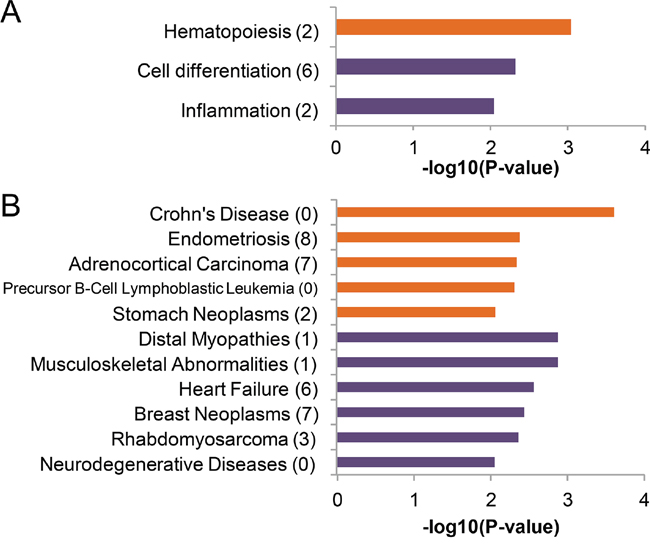 Figure 4: Enriched function and diseases of the differentially expressed microRNAs. The nominal significant terms (P-value<0.01) with respect to A. function and B. diseases were listed here. The enriched terms of arterial highly expressed microRNAs and venous highly expressed microRNAs were indicated by orange and violet bars, respectively. We also tested if these terms could also be obtained from 1000 random set of equal number of microRNAs. The number of random sets showing association with the certain term was labeled in the parenthesis after the term name. Since no term was detected from more than 10 out of 1000 random sets, empirical P-values < 0.01 of all the listed terms were suggested.

Functional enrichment analysis of the targets of the differentially expressed microRNAs

In above analysis, no overlapped significant terms were found between the two groups of differentially expressed microRNAs. This could be resulted from the limited knowledge about these microRNAs. To address this issue, we further analyzed the enriched function of the shared and exclusive targets of them. The high-confident targets (transcripts) were retrieved from the miRGate database [10], and 1957 arterial exclusive targets, 1232 venous exclusive targets and 333 shared targets were obtained. The enriched function of each group of microRNA targets were analyzed and clustered by gProfileR software package [11]. A corrected P-value (by Benjamini-Hochberg correction) of 0.05 was adopted for significant terms. Interestingly, we found the shared targets of arterial and venous highly expressed microRNAs were enriched in the cell development-related terms (Figure 5) like regulation of multicellular organismal development (corrected P-value = 1.94e-3) and cell growth (corrected P-value = 2.06e-2). Especially, the urogenital system development (corrected P-value = 8.13e-3) and vasculature development (corrected P-value = 2.92e-2) were enriched. For arterial exclusive targets, they were enriched not only enriched in cell development-related terms, but also in the positive regulation of lipid kinase activity (corrected P-value = 1.63e-3) and bicellular tight junction assembly (corrected P-value = 3.71e-3). We did not find specific terms associated with venous exclusive targets. When using DAVID 6.7 tool [12] instead, no significant enriched functional terms were detected for shared targets and venous exclusive targets. Analyzing all targets of venous highly expressed microRNA showed that their significant enriched terms were mostly covered by the terms associated with the shared targets. Finally, we noted that most of the enriched function terms listed in Figure 5 were general rather than specific. To test if these general terms could be detected by chance, for each group of targets, we assembled 1000 random target sets of the same size, and re-performed the functional enrichment analysis by gProfileR. The results indicated that the terms listed in Figure 5 could be identified in at most 18 out of 1000 random target set, suggesting empirical P-values < 0.02. Many terms could only be found in less than 10 ransom sets, indicating non-random term association with empirical P-values < 0.01. 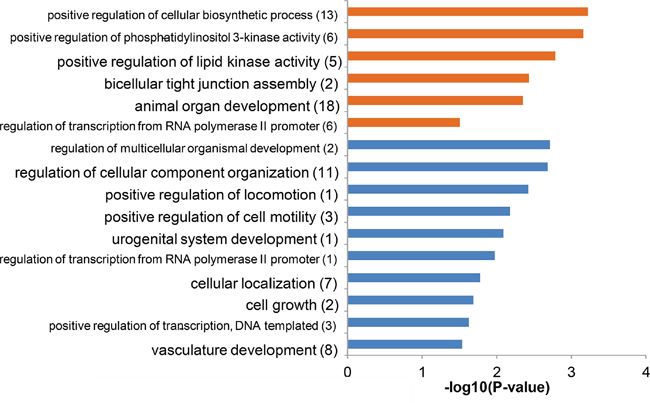 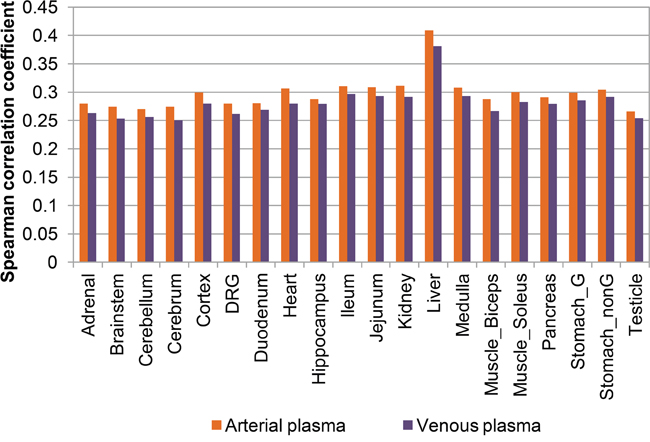 * Only diseases related with the tissue where the microRNA exhibited enriched expression were listed. See discussion in main text for more detailed description about these microRNA-disease associations.

Our analysis also indicated intriguing correlation between plasma expression and specific tissue expression for several microRNAs (Table 2). These microRNAs have potential to be interesting biomarkers for disease diagnosis and therapy. Indeed, by searching against the well-established HMDD database [4], miR2Disease database [2] and recent literature, we found that a few of them have already been proposed to be associated with specific diseases. For example, miR-1 was a microRNA enriched in muscle and heart. It could relieve cardiomyocyte hypertrophy [15] and promote arrhythmogenesis in coronary artery disease [16]. And circulating miR-1 was demonstrated as a biomarker for cardiovascular diseases [17]. Another venous highly expressed microRNA miR-7 was enriched in nervous system. This microRNA was proposed to be associated with multiple nervous system disorders like autistic disorder [18] and schizophrenia [19], and act as tumor suppressor against schwannoma tumors [20]. Over-expression of miR-7 in venous plasma was also demonstrated as a biomarker of schizophrenia [21]. Likewise, the arterial highly expressed microRNA miR-539 showed elevated expression in the abnormal tissue in autistic disorder and medulloblastoma [18, 22]. But the capability of circulating miR-539 as the disease biomarker has not been tested. Moreover, for most arterial highly expressed microRNAs, their function and disease association await further investigation (Table 2).

In summary, our analysis indicated the potential significance of arterial circulating microRNAs. However, two important questions wait to be answered by future investigation. First, the casual factor of differential expression between arterial plasma and venous plasma remained elusive. Tissue release of microRNAs to the blood may play a critical role [6, 8], but the contribution of deregulated microRNAs in blood cells should also not be omitted. For instance, we noticed some hypoxia-responsive microRNAs [23] were differentially expressed. Such differential expression would be partly resulted from the altered blood cell microRNA expression profile in response to the altered oxygen content. Second, we only compared the microRNA expression profiles from healthy rats. To test the biomarker capability of arterial plasma microRNAs, their changes under disease conditions should be extensively investigated for the discovery of the novel biomarker.

Investigation has been conducted in accordance with the Declaration of Helsinki, Animal Management Rules of the Ministry of Health of the People’s Republic of China and the guide for the Care and Use of the Laboratory Animals of Peking University. It has been approved by the authors' institutional review board. More specifically, male 10-week-old SD rats (280–300 g) were provided by the Animal Department, Health Science Center, Peking University. All the animals were housed in standard cages in a temperature- and humidity-controlled environment, on a 12 h light/dark cycle, with free access to water. All animal care and experimental protocols were approved by the Peking University Animal Ethics Committee.

Total 3mL of arterial or venous blood was collected from abdominal aorta or postcava respectively. And then blood was transferred into an anti-coagulation tube (EDTA, prepared with DEPC water) containing RNAase inhibitor. Plasma was obtained by centrifugation at 1600 g for 10 min, and the supernatant was centrifuged at 16000 g for 5 min at 4°C. Then the plasma was filtered through a 0.22-μm filter (MILLEXGV; Millipore). RNA was extracted using the miRNeasy Serum/Plasma kit (Qiagen; Valencia, CA) according to the manufacturer’s protocol with modifications as recommended in previous studies [24, 25].

cDNA samples were prepared from total RNA of plasma. In total, 3 up-regulated and 2 down-regulated microRNAs in arterial plasma were analyzed by SYBR green I dye-based detection with specific primers. The relative expression of microRNA was determined by the 2-ΔΔCt method with Spike-In Control (cel-miR-39-3p) expression to normalize the data. All the primers for rno-miR-423-5p, rno-miR-340-3p, rno-miR-139-3p, rno-miR-1-3p and rno-miR-125b-5p and C. elegans microRNA control cel-miR-39 were synthesized by RIBOBIO.

The functional enrichment and disease association analysis of differentially expressed microRNAs were performed by using the TAM tool [3] with default parameters of TAM and version 2 of the annotation set. Because the default FDR threshold of TAM resulted in no significant terms, a P-value cutoff of 0.01 was applied instead. Note also that the rat microRNAs were mapped to their human orthologs before analysis since the TAM tool only support human microRNAs.

We retrieved the microRNA target datasets from miRGate [10] database. For each differentially expressed microRNA, only the targets which were experimentally validated or supported by at least three independent predictions were retained. Targets exclusive to highly expressed microRNAs or venous highly expressed microRNAs, and those shared by these two groups of microRNAs were separately analyzed by gProfileR software package (v0.6.1) in R [11]. The Benjamini-Hochberg corrected P-value threshold of 0.05 was used to determine the significant functional terms. The significant functional terms were filtered using the ' Best Per Parent' criterion provided by gProfileR to avoid redundancy.

The microRNA expression profiles across 20 tissues were obtained from Rat MicroRNA Body Atlas [13], and compared with the plasma microRNA expression profiles in this study by Spearman correlation coefficient. Note that only male rat tissue samples were considered. The tissue-enriched microRNAs were obtained from the same study.

All authors declare no conflicts of financial interest.