Conclusions: We found that the A allele of rs699947 and the A allele of rs833052 within VEGF gene, interaction between rs2010963 and smoking, haplotype containing the rs2010963- C and rs833052- A alleles were all associated with increased bladder cancer risk.

As we all known that bladder cancer was an important health problem, and was the 7th and 17th most frequent cancer in males and females, respectively [1], and in China, the occurrence of bladder cancer has dramatically increased from 1991 to 2009, and it accounted for more than 20,000 deaths in China in 2009 [2, 3]. Some risk factors of bladder cancer have been established, such as tobacco smoking and occupational exposure to chemical carcinogenesis [4]. However, only a few of the exposed individuals develop bladder cancer in their lifetime, suggested that genetic factor may also play a crucial role in the pathogenesis of bladder cancer [5].

Vascular endothelial growth factor (VEGF) is a potent endothelial cell-specific regulator of angiogenesis, and has been identified as a key molecule in promoting angiogenesis involving tumor growth and metastasis [6]. The VEGF gene is located on chromosome 6p21.3 and consists of 8 exons. To date, many single-nucleotide polymorphisms (SNPs) of VEGF have been reported [7, 8], and some SNPs have been reported association with susceptibility to several types of tumors, including renal and gastric cancers [9, 10]. Recently, some studies focused on the association between VEGF gene polymorphisms and bladder cancer risks were conducted, but these studies concluded inconsistent results. Several large cohort studies in Europe and the USA have demonstrated that cigarette smoking was an important risk factor for bladder cancer [11, 12], and several genes have been reported interaction with smoking on bladder cancer susceptibility, such as XPC-PAT gene [13], however, no study focused on impact of interaction between VEGF gene and smoking on bladder cancer risk. So the present study aimed to evaluate the influence of VEGF SNPs, possible gene- gene, gene- smoking interaction and haplotype combinations on bladder cancer risk base on a Chinese population.

A total of 1088 participants (733 males, 355 females) were selected, including 360 bladder cancer patients and 728 control participants. The mean age of all participants was 62.1 ± 13.2 years. General characteristics of 1088 study participants in case and control group were shown in Table 1. The means of age and BMI, and distributions of males and alcohol drinkers were not significantly different between cases and controls. The rate of smokers was higher in cases than that in controls.

Table 2: Genotype and allele frequencies of 6 SNPs between case and control group

GMDR model was used to screen the best interaction combination among 6 SNPs within VEGF gene, and find the gene- gene and gene- smoking interaction on bladder cancer risk. Table 3 summarized the results obtained from GMDR analysis and indicated a potential interaction between rs2010963 and smoking on bladder cancer risk (p = 0.0107). Overall, the cross-validation consistency of this model was 9/10, and the testing accuracy was 60.11%. But we did not find a significant any-locus model among SNPs. We also conducted interaction analysis for the significant GMDR model by using logistic regression. We found that current smokers with rs2010963- GC or CC genotype within VEGF gene have the highest bladder cancer risk, compared to never smokers with rs2010963- GG genotype, OR (95%CI) = 3.25 (1.71–4.83), after covariates adjustment (Table 4).

Table 5: the D’ values among 6 SNPs within VEGF gene for the linkage disequilibrium test

In this study, we found that the A allele of rs699947 and the A allele of rs833052 within VEGF gene were significantly associated with increased bladder cancer risk. The VEGF gene was located on chromosome 6p21.3 and consisted of 8 exons exhibiting alternate splicing to form a family of proteins [14]. Some studies have reported that SNPs within VEGF were associated with many types of cancer, such as oral, breast, glioma, colorectal and lung [15–17]. Recently, some studies focused on the association between VEGF gene polymorphisms and bladder cancer risks were reported, but they concluded inconsistent results. VEGF is pivotal to the neovascular growth required to sustain solid tumor progression [18]. Crew et al [19] have demonstrated the role of elevated urinary levels of VEGF on bladder cancer specimens. Urquidi et al [20] suggested that VEGF could be a valuable addition to voided urine sample analysis for the detection of BCa. However, another study [21] conducted in Canary Islands and Spain indicated that subjects with the VEGF genotype might be not significantly associated with risk of bladder cancer. García-Closas et al. [22] indicated that three SNPs in the promoter region were associated with increased risk for bladder cancer, but a polymorphism in intron 2 was associated with reduced risk. A study from Japan [23] suggested that the serum VEGF level correlates significantly with muscular invasiveness, VEGF promotes tumor proliferation and invasion through VEGFR-2. Jaiswal et al [24] indicated that genotypes of VEGF- rs699947 and rs35569394 polymorphism in the promoter region of VEGF gene may affect the disease susceptibility, significant associations of bladder cancer risk with heterozygous CA genotype (1.69-folds) in VEGF- rs699947 and heterozygous genotype of VEGF rs35569394 were observed, but VEGF- rs35569394 genotype showed reduced risk for bladder cancer. Yang et al. [25] conducted a study for Chinese population and indicated that the rs3025039 and rs1570360 gene polymorphisms were not found to be correlated with the risk of bladder cancer or its progression, but the VEGF rs833052 C/A polymorphism may be associated with a modest increase in the risk of bladder cancer. Although the fore- mentioned two studies have obtained the similar results with that in current study, sample size in study by Jaiswal et al was relatively smaller than that in our study. The problem on sample size was not exist in the study by Yang et al, but the SNPs included in this study was less, so some others SNPs which were associated with bladder cancer may be missed. VEGF or VEGF receptors (VEGFR) expression and the exact function of VEGF/VEGFR receptor signaling on bladder cancer development remain unclear. Zhang et al. [26] suggested that VEGF expression levels were significantly associated with tumor stage, tumor grade and lymph node metastasis (all P < 0.05), it means that VEGF may be promising candidates for use as diagnostic and prognostic molecular biomarkers for BC. Earlier study showed that there is association between grade/stage and VEGF expression in bladder cancer [27].

There several limitations in our study. Firstly, the sample size for this study was relatively small, although it has met the requirement; Secondly, more SNPs within VEGF gene should been included in the future analysis. Thirdly, all controls were selected from a community-based chronic non-communicable diseases screening program, therefore, a selection bias could not be avoided and the subjects may not be representative of the general population. Finally, we did not evaluate the relationships of these SNPs with the plasma levels of VEGF, which may potentially reflect the disease state of patients.

In conclusion, we found that the A allele of rs699947 and the A allele of rs833052 within VEGF gene, interaction between rs2010963 and smoking, and haplotype containing the rs2010963- C and rs833052- A alleles were all associated with increased bladder cancer risk.

Between July 2010 and June 2015, bladder cancer patients met the standards were selected from the Nanjing Jinling Hospital and the second affiliated Hospital of Dalian medical university. All the cases were histopathologically confirmed and staged according to the tumor-node-metastasis staging system of the Union for International Cancer Control [31]. The tumors were graded according to the World Health Organization classification. Controls were randomly selected from healthy volunteers from community-based chronic non-communicable diseases screening program, and conducted with a 1:2 matched (age and sex) in the same region. Consequently, a total of 360 diagnosed bladder cancer cases and 728 control participants were included in current study (Figure 1). Information regarding gender, age, tobacco smoking and tumor histopathology was obtained from medical records. Body weight and height were measured. Body mass index (BMI) was calculated as weight in kilograms divided by the square of the height in meters. Current cigarette smokers were those who self-reported smoking cigarettes at least once a day for 1 year or more. Alcohol consumption was expressed as the sum of milliliters of alcohol per week from wine, beer, and spirits. Informed consent was obtained from all participants. This study was approved by the ethics committee of Nanjing University School of Medicine. 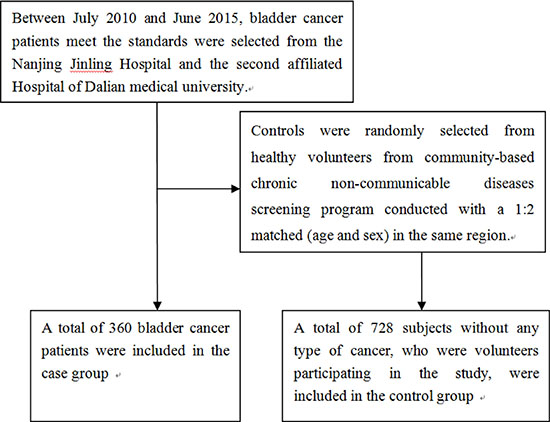 The SNPs were selected based on the NCBI database (http://www.ncbi.nlm.nih.gov/projects/SNP) according to the following three criteria: 1) located in a gene fragment that could have functional effects; 2) MAF more than 5%; 3) previously reported associations with bladder cancer, but were not well studied. Taking into account the limited human resources and financial resources, just 6 SNPs within VEGF gene were selected for genotyping, including: rs2010963, rs833052, rs833061, rs25648, rs699947 and rs3025039. Genomic DNA from participants was extracted from EDTA-treated whole blood, using the DNA Blood Mini Kit (Qiagen, Hilden, Germany) according to the manufacturer’s instructions and stored at –20°C until use. The genotypes of selected 6 SNPs were detected by polymerase chain reaction-restriction fragment length polymorphism (PCR–RFLP) method. The nucleotide sequence of primers and description for the 6 SNPs within VEGF gene were shown in Table 7. The PCR–RFLP program for the SNPs amplification consisted of an initial denaturation step at 95°C for 2 min, followed by 35 cycles of 30 sec at 95°C, 30 sec at 67°C, 30 sec at 55°C and a final elongation at 72°C for 5 min. Genotyping results were confirmed by randomly assaying 10% of the original specimens for replication to exclude genotyping errors. There were no discrepancies between genotypes determined in duplicate.

SPSS 22.0 software package (SPSS Inc, Chicago) for Windows 7 was used for all statistical analysis in this study. The means and standard deviations (SD) were calculated for normally distributed continuous variables and compared by using Student’s t test. Percentages were calculated for categorical variables and were analyzed using χ2 test. Hardy-Weinberg equilibrium and allele frequencies in cases and controls were calculated using SNPstats (http://bioinfo.iconcologia.net/SNPstats). Logistic regression was performed to investigate association between 6 SNPs within VEGF gene, additional gene- smoking interaction on bladder cancer risk. All reported p-values were two-tailed, and those less than 0.05 were considered statistically significant.

Generalized multifactor dimensionality reduction (GMDR) [32] was used to screen the best interaction combination among SNPs and smoking. The cross-validation consistency score is a measure of the degree of consistency with which the selected interaction is identified as the best model among all possibilities considered. The testing balanced accuracy is a measure of the degree to which the interaction accurately predicts case–control status with scores between 0.50 (indicating that the model predicts no better than chance) and 1.00 (indicating perfect prediction). Finally, a sign test or a permutation test (providing empirical p-values) for prediction accuracy can be used to measure the significance of an identified model.