Does dual HER-2 blockade treatment increase the risk of severe toxicities of special interests in breast cancer patients: A meta-analysis of randomized controlled trials

Although dual HER-2 blockade treatment could offer greater clinical efficacy in breast cancer, the risk of severe toxicities of special interest related to this combined regimen in breast cancer remained unknown. We systematically searched public databases (MEDLINE, EMBASE, Cochrane library) to identify relevant studies that comparing anti-HER2 monotherapy (lapatinib or trastuzumab or pertuzumab) with dual HER-2 blockade treatment (pertuzumab plus trastuzumab or trastuzumab plus lapatinib) in breast cancer. A total of 11,941 breast cancer patients from 9 trials were included for analysis. Meta-analysis showed that dual HER2 blockade treatment significantly increased the risk of severe diarrhea (OR 2.52, p<0.001) and treatment discontinuation (OR 1.52, p=0.014), but not for severe rash (OR 1.06, p=0.81), liver toxicities (OR 1.16, p=0.28), CHF (OR 1.46, p=0.09), LVEF decline (OR 1.09, p=0.40) and FAEs (OR 0.97, p=0.91). Similar results were observed in sub-group analysis according to anti-HER2 regimens in terms of severe diarrhea and treatment discontinuation. Additionally, trastuzumab plus lapatinib significantly increased the risk of LVEF decline in comparison with lapatinib alone (OR 1.48, p=0.002). Our analysis indicated that dual anti-HER2 blockade treatment significantly increased the risk of developing severe diarrhea and treatment discontinuation in comparison with anti-HER2 monotherapy. These were no evidence of an increased risk of fatal adverse events with dual-HER2 blockade treatment.

Approximately 15-20% of all breast cancers (HER2-positive) have human epidermal growth factor receptor 2 (HER2) protein overexpression resulting in a more aggressive phenotype and worse outcome [1–3]. The epidermal growth factor receptor (EGFR) superfamily is composed of four transmembrane tyrosine kinase receptors containing HER1, HER2, HER3, and HER4, which plays a critical role in cellular growth and proliferation [4]. HER2 is considered as an orphan receptor because it has no known ligand, and it could constitutively activate signaling pathways through ligand-independent dimerization [5]. As a result, molecular targeting of the HER2 receptor and its family members have emerged as attractive candidates for anticancer therapy [6]. Currently, two anti-HER2 agents, including humanized monoclonal antibody trastuzumab [7, 8] and the small-molecule tyrosine kinase inhibitor lapatinib [9], have been approved for use in the HER2-positive breast cancer. However, despite these treatment advances, most of HER2-positive breast cancer would eventually progress due to intrinsic and acquired HER2 agent resistance, highlighting the need to develop novel agents and combination strategies to overcome resistance.

During the past decade, a dual targeting approach by combination of two anti-HER2 agents has been investigated in several large randomized controlled trials [10]. In fact, dual anti-HER2 therapy has been proven to improve clinical outcomes of metastatic HER2 positive breast cancer though to be refractory to trastuzumab alone, which lead to the approval of pertuzumab for the treatment of HER2 positive breast cancer [11]. In addition, it has been found that dual anti-HER2 treatments almost double the rates of pathologic complete response in comparison with anti-HER2 therapy alone in the neoadjuvant setting [12, 13]. However, the safety profile of dual anti-HER2 blockade treatment remains undetermined. As a result, we perform this systematic review and meta-analysis to assess whether the dual anti-HER2 treatment would increase the risk of severe (grade 3 and 4) toxicities of special interest in breast cancer when compared to anti-HER2 monotherapy.

As shown in Figure 1, 22 potentially eligible trials were retrieved for full-text evaluation. The reasons for study exclusion were illustrated in Figure 1. A total of twelve trials were included for analysis [11, 12, 14–23]. Three trials were up-date results of previously published trials [16, 17, 21] and thus nine trials were finally included in this systematic review. (Figure 1) The baseline characteristics of the trials were listed in Table 1. A total of 11,701 HER2 positive breast cancer patients were included in the present study. A rough assessment of the included trials was carried out by using Jadad scale. The quality of the nine trials was high, two trials had a Jadad score of 5 [11, 15], and seven trials had a Jadad score of 3 [12, 14, 18–20, 22, 23]. 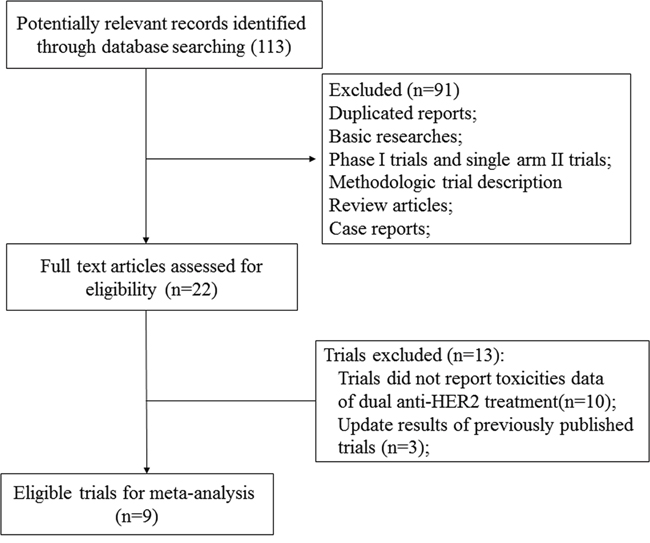 I2≥50% suggests high heterogeneity across studies.

We did no observed publication bias for the AEs studied excepting for severe diarrhea events by Egger tests (P= 0.022, Table 4).

Due to the increased understanding of the molecular events involved in breast cancer development, the treatment strategy for HER2-positive breast cancer has dramatically evolved. The humanized monoclonal antibody trastuzumab has been the foundation of care for HER2 positive breast cancer in both the neoadjuvant/adjuvant and metastatic settings [24, 25]. Although the prognosis of HER2-positive breast cancer has been significantly improved by using trastuzumab, most of these patients would become resistance to trastuzumab, and new treatment strategies are clearly required. In fact, dual anti-HER2 therapy has been proven to improve clinical outcomes of early and metastatic HER2 positive breast cancer [18, 26]. However, whether dual anti-HER2 combination therapy would increase the risk of severe (grade 3 and 4) toxicities of special interest remains undetermined. In the present meta-analysis, a total of 11,941 breast cancer patients are included. Our results show that dual HER2 blockade treatment is associated with a significantly increased risk of severe diarrhea (OR 2.52, p<0.001) and treatment discontinuation (OR 1.52, p=0.014), but not for severe rash (OR 1.06, p=0.81), liver toxicities (OR 1.16, p=0.28), CHF (OR 1.46, p=0.09), LVEF decline (OR 1.09, p=0.40) and FAEs (OR 0.97, p=0.91).

Several limitations need to be concerned in present study. First, our study is a study-level meta-analysis rather than an individual patient data, therefore a more comprehensive by confounding variables at the patient level could not be performed. Second, this study is a retrospective study, and the baseline characteristics of included study might be different, which might increase the heterogeneity between studies.

The Cochrane Central Register of Controlled Trials (CENTRAL), PubMed (up to June 2016), and Web of Science (up to June 2016) databases were searched for studies using “anti-HER2 agents”, “trastuzumab”, “pertuzumab”, “lapatinib”, “breast cancer”, “breast neoplasm”, “randomized controlled trial” and “humans”. When more than one publication was identified from the same clinical trial, we used the most recent or complete report of that trial.

To be included in the meta-analysis, a study had to satisfy the following requirements: (1) patients with pathologically confirmed breast cancer; (2) randomized controlled trials comparing anti-HER2 monotherapy (lapatinib or trastuzumab or pertuzumab) versus dual HER2 blockade treatment with or without chemotherapy regardless of treatment settings; (3) available data regarding adverse outcomes of interest (grade ≥3 AEs of diarrhea, rash, liver toxicities and congestive heart failure (CHF), left ventricular ejection fraction (LVEF) decline less than 50% or a decrease of more than 10% from baseline, AEs lead to permanent treatment discontinuation and fatal adverse events) and sample size.

For the calculation of odds ratio (OR), patients assigned to dual anti-HER2 treatment were compared only with those assigned to anti-HER2 monotherapy in the same trial.

We used the Peto method to calculate the pooled odds ratios (OR) with 95% confidence intervals (CIs), because this method provided the best CI coverage and was more powerful and relatively less biased than the fixed or random-effects analysis when dealing with low event rates. All statistical analyses were performed by using Open Meta-Analyst software version 4.16.12 (Tufts University) and Version 2 of the Comprehensive MetaAnalysis program (Biostat, Englewood, NJ).

To avoid loss of information or choices related to results from trials with multiple intervention arms (for example, three-arms trials with two anti-HER2 monotherapy arms and one combined anti-HER2 therapy arm), we merged the two relevant (anti-HER2 monotherapy) arms into one group by adding the sample sizes and numbers of people with events and we compared the merged group with the different (combined anti-HER2 therapy) arm.

Between-study heterogeneity was estimated using the χ2-based Q statistic [33]. Heterogeneity was considered statistically significant when P heterogeneity < 0.05 or I2 > 50%. Potential publication biases were evaluated for severe AEs using Begg’s and Egger’s tests [34, 35]. A two-tailed P value of <0.05 without adjustment for multiplicity was considered statistically significant. The results of the meta-analysis were reported as classic forest plots. The Jadad scale was used to assess the quality of included trials based on the reporting of the studies’ methods and results [36].

This work is founded by the research grant (2013GS500101-05) from huimin program of the National Science and Technology.

2. Hynes NE. Amplification and overexpression of the erbB-2 gene in human tumors: its involvement in tumor development, significance as a prognostic factor, and potential as a target for cancer therapy. Seminars in cancer biology. 1993; 4:19-26.