Purpose: The aim of this update meta-analysis was to clarify the clinicopathologic and prognostic significance of human epidermal growth factor receptor(EGFR) expression in gastric cancer patients.

It has been reported that the fourth most malignant tumor is Gastric cancer (GC), which is the second leading cause of tumor related death in the world [1]. It was estimated that there were 24,590 new patients diagnosed with GC in the United States with 10,720 deaths in 2015 [2]. Patients with advanced GC have a median overall survival of less than 12 months [3–6]. From the aspect of active treatments and preventions, reliable prognostic biomarkers are valuable for improvement of prognosis in GC patients.

The initial search returned 495 studies (with 28 duplicate studies). After screening the abstracts, 411 irrelevant studies were excluded according to the criteria of inclusion and exclusion. Reviewers identified 56 potential studies for full-text review and 31 studies were eliminated due to inadequate data for meta-analysis. Finally, 25 studies were included in the current meta-analysis [7, 9, 10, 19–40]. The detail of the screening process was shown in Figure 1. 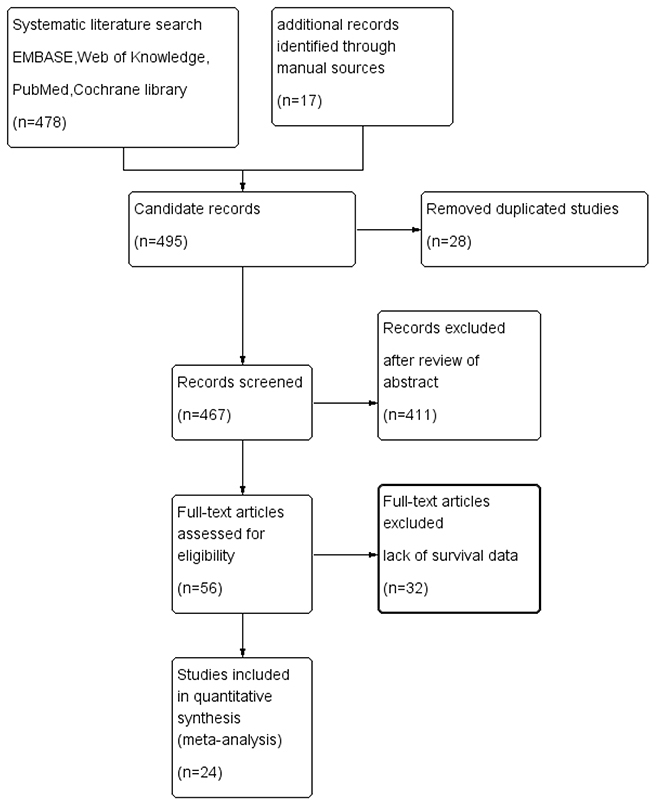 Figure 1: Flowchart of study selection in the present meta-analysis.

The characteristic of the included studies were summarized in Table 1. The publication time ranged from 1993 to 2016. The subject number of the included studies ranged from 30 to 950, with a mean sample size of 289. The mean length of follow-up period ranged from 11 to 96 months. The NOS score of 25 eligible studies varied from 7 to 8, with a mean value of 7.16. Twenty-five studies provided overall survival data and/or survival curves. Fifteen studies explored the association between EGFR expression and clinicopathologic parameters, such as invasion depth, tumor differentiation, tumor stage, and lymph node metastasis.

Table 1: Characteristics of studies included in the present meta analysis 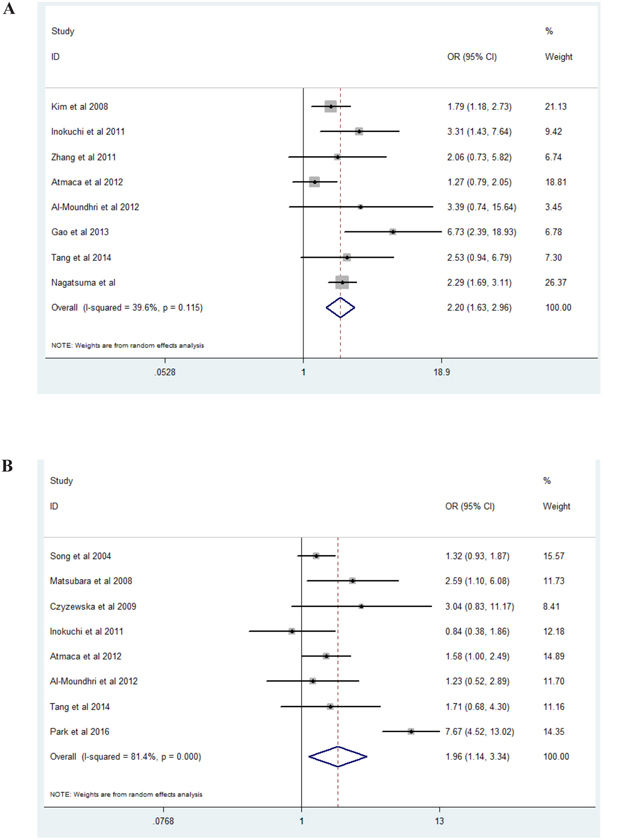 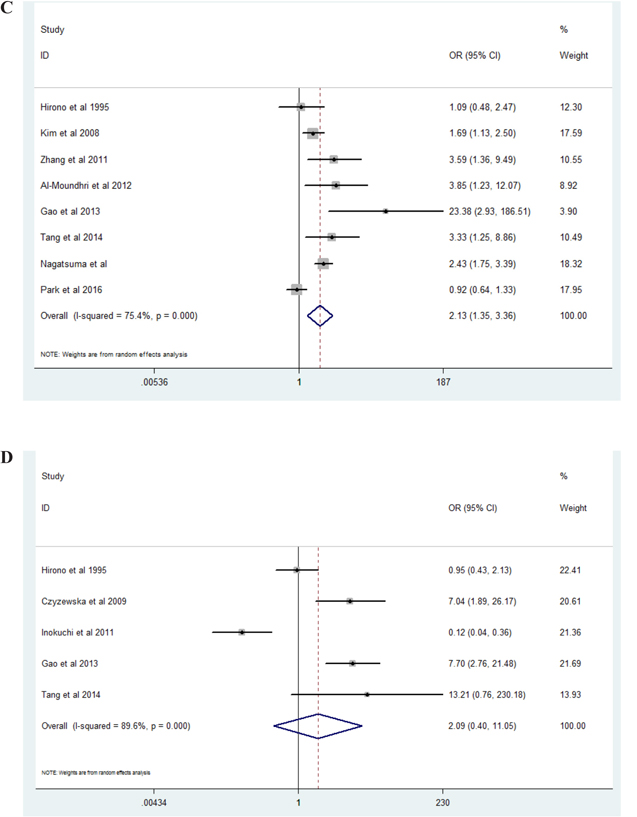 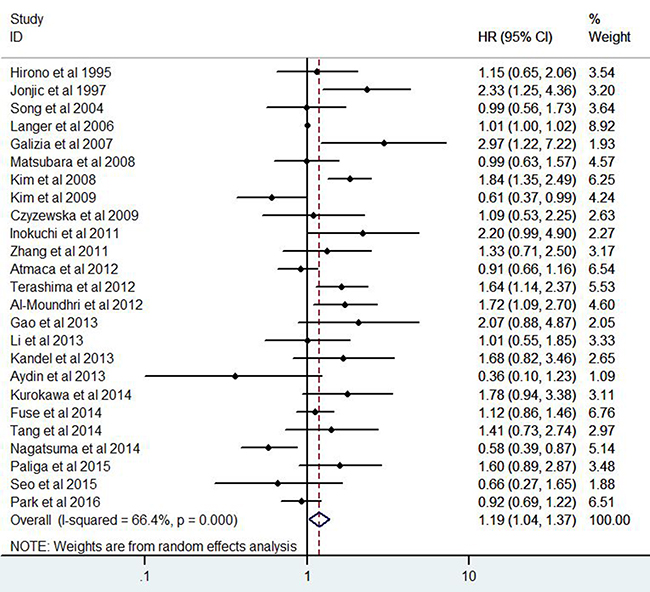 All studies were sequentially removed to explore that whether any individual study had a significant influence to the pooled HR. The results of sensitivity analysis demonstrated that the pooled HR was not significantly affected by any study (Table 2).

Table 2: Effect of individual studies on the pooled HRs of EGFR expression and overall survival 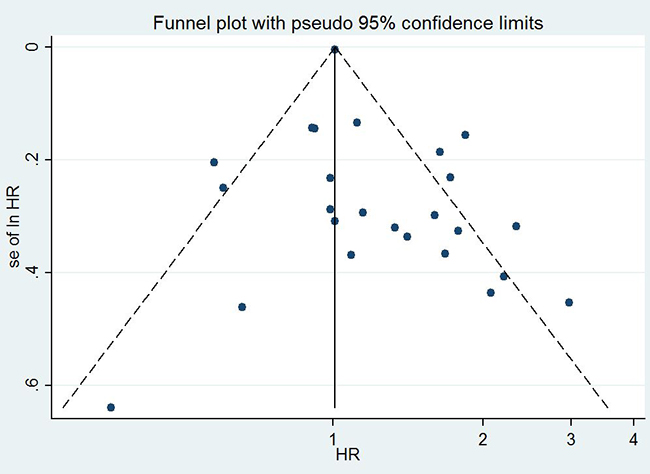 Figure 4: The funnel plot for all eligible studies provided HRs of EGFR expression for overall survival.

The contour-enhanced funnel plot with the trim-and-fill method can help to determine whether or not the funnel plot asymmetry was caused by publication bias [18]. Contour lines which suggested conventional milestones in levels of statistical significance (0.01, 0.05, and 0.1) are added to conventional funnel plots. If the dummy studies lie in the areas with high statistical significance (P>0.05), this will suggest that the funnel plot asymmetry may be caused by factors other than publication bias, such as poor methodological quality or true heterogeneity. If the dummy studies lie in the areas with non-statistical significance, then this will indicate the possibility that the funnel plot asymmetry is due to publication bias. The dummy studies were indicated by red triangles and the genuine studies were indicated by green dots (Figure 5). 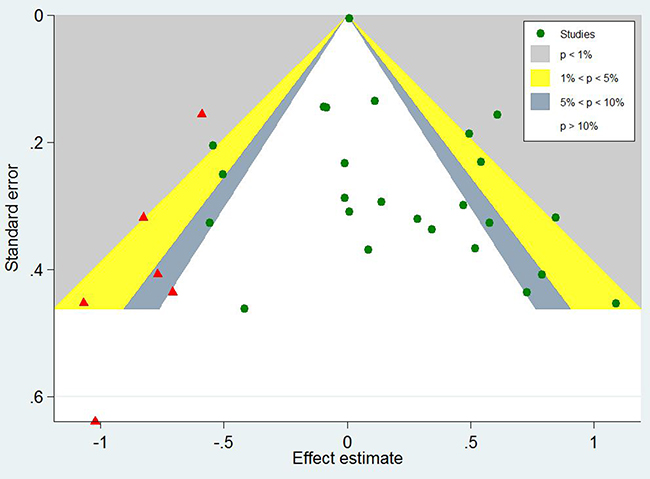 We further performed cumulative meta-analysis to assess the stability of EGFR expression for prognosis of GC patients (Figure 6). The pooled HRs of cumulative meta-analysis ranged from 1.19(95%CI: 1.04-1.37) to 1.30 (95%CI: 1.08-1.55) for OS since 2012, demonstrating that performance of EGFR expression for prognosis in GC patients was stable and reliable. 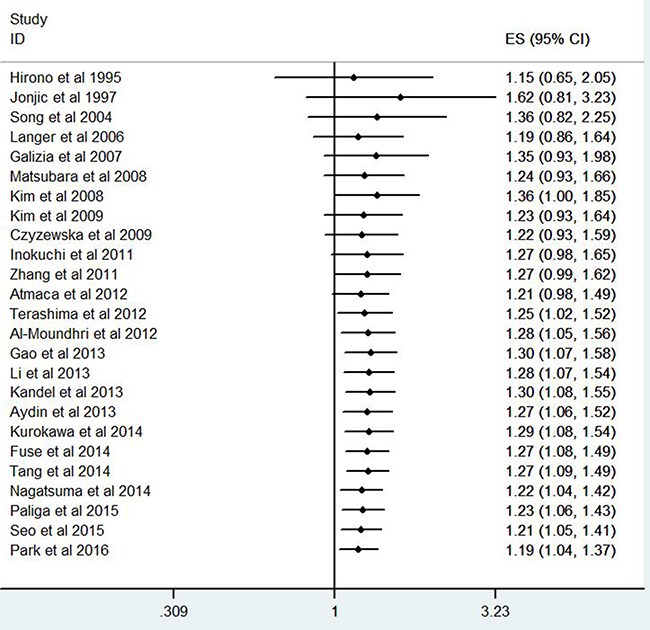 Figure 6: Cumulative meta-analysis for stability of EGFR expression for prognosis of GC patients.

It has been reported that the activation of EGFR leads to the phosphorylation of the intracellular tyrosine kinase and initiate a series of intracellular signal pathways such as the STAT, Ras-MAPK, and PI3K-AKT signaling pathway [8–9]. It has been found that these signaling pathways above can affect cell proliferation, angiogenesis, invasion, migration, metastasis, and apoptosis [41–42]. These studies provided reasonable interpretation of molecular biology for the prognostic role of EGFR expression in patients with GC.

Although significant heterogeneity and publication bias were detected in the present meta-analysis, further sensitivity analyses ascertained that the prognostic significance of high EGFR expression in GC patients did not changed after removing any study. Meanwhile, cumulative meta-analyses also supported that the performance of high EGFR expression for prognosis of GC patients was stable and reliable.

There were several limitations must be taken into account while interpreting the conclusions of the present meta analysis. First, high EGFR expression was defined according to different cut-off values in various studies, which might affect the stability of the conclusions in different studies. Second, different baseline characteristics, such as tumor stages, treatments, and races, might lead to clinical heterogeneity. Third, to reduce clinical heterogeneity, the studies with EGFR expression detected by Western blot (WB) or Polymerase Chain Reaction (PCR) were excluded from the present study, which might influence the clinical applicability. We recommend that the studies with EGFR expression detected by WB or PCR method should be included in future study to further explore the prognostic role of EGFR expression in GC patients. Fourth, the present meta analysis only provided evidences for correlation between high EGFR and clinicopathologic features, which could not be simply interpreted as causal relationship.

A systematic search was performed in the following electronic databases: PubMed, EMBASE, Cochrane Library, and Wed of Knowledge database from Jan 1970 to May 2016 for eligible studies, which assessing the clinicopathologic and prognostic significance of EGFR expression for prognosis in GC patients. We performed literature search by strategy combined text word and MeSH (Emtree for EMBASE database accordingly) with the terms “EGFR” or “ErbB1” or “HER1” or “epidermal growth factor receptor” and “gastric cancer” or “gastric carcinoma” or “stomach tumor” and “survival” or “outcome” or “prognosis” or “prognostic”. The strategy was correspondingly adjusted in different databases. In the retrieval process, expanded search of hyponym was performed. Additional, we made a manual search using the reference lists of the included studies for including eligible studies. We even contacted the corresponding author to get necessary information if necessary. The search was restricted to human studies, but there were no restrictions on language or publication time. All clinical investigation and data achievement were conducted according to the principles of Declaration of Helsinki.

The inclusion criteria were as follows: (1) proven pathological diagnosis of GC in humans; (2) EGFR expression evaluation using immunohistochemistry (IHC) method; (3) provided information on clinicopathological parameters and/or survival outcome such as hazard ratio (HR) and 95% confidence interval (CI). Studies not directly providing hazard ratio and 95% confidence interval were included if survival information were available from survival curves. Studies published in Chinese were included in the current meta-analysis as English literature. Only the most recent study was included in the current meta-analysis among duplicate studies. There were no restrictions on sample size or follow-up period.

The following studies were excluded: (1) reviews, letters, case reports, and conference abstracts without original data; (2) non-human experiments;(3) laboratory studies;(4) studies from which the necessary information could not be extracted.

Two reviewers (Zhiqiao Zhang and Jixin Lin) independently assessed the quality of the studies included in the present meta-analysis using the Newcastle-Ottawa Quality Assessment Scale (NOS) (Table 1). The NOS contains assessments of patient selection, study comparability, follow-up, and outcome of interest. The total scores were used to compare study quality. Disagreements in the literature assessment were resolved through consensus with the third reviewer (Hongfeng Tang).

Two investigators (Zhiqiao Zhang and Jixin Lin) independently extracted and examined the following data from the original studies: surname of the first author, publication year, country, sample size, disease stage, detection method of EGFR expression, clinical parameters, and survival outcome data (HR and CI). Information from each eligible study was extracted and recorded in a standardized form. All eligible studies were coded as surname of the first author + publish year in the standardized form. When it was necessary, study authors were contacted for necessary information. Disagreements between two investigators were resolved by discussion. When necessary, the third investigator (Hongfeng Tang) helped to reach a consensus.

The statistical analysis was executed according to the proposals of the Meta-Analysis of Observational Studies in Epidemiology group (MOOSE) [13]. The HRs and 95% CIs were used to summary survival information. We directly obtained pooled HRs and 95% CIs if the survival data were reported in the text. While the HRs and 95% CIs were not directly reported in the text, the survival information were extracted from Kaplan-Meier curve and used to estimate HR. The heterogeneity was assessed by using I2 statistic, which was defined according to the Cochrane Handbook [14]: 0% to 40%, negligible heterogeneity; 30% to 60%, moderate heterogeneity; 50% to 90%, substantial heterogeneity; 75% to 100%, considerable heterogeneity. The subsequently meta-analysis was performed using random effect model with DerSimonian and Laird method [15], which applying the inverse of variance as a weighing factor. Meta-regression analyses with REstricted Maximum Likelihood (REML) method and subgroup analyses were performed to explore the sources of heterogeneity. Funnel plot, Begg's test [16], and Egger's test [17] were used to assess the publication bias. The contour-enhanced funnel plot with the trim-and-fill methodwas performed to determine whether or not funnel plot asymmetry was caused by publication bias [18]. P value<0.05 was considered statistically significant. The statistical analyses were performed by STATA version 12.0 software (Stata Corporation, College Station, Texas, USA).

This study was funded in part by Health Department and Finance Department of Guangdong Province.

The authors have declared that they had no conflicts of interests.