Geraniin, a typical ellagitannin isolated from Phyllanthusurinaria Linn, has been reported to have anti-inflammatory effect. The aim of the study is to investigate the therapeutic effects of geraniin on LPS-induced acute lung injury (ALI) in mice. The mice were intranasal adminisration of LPS for 12 h. Geraniin was intra-peritoneal injection 1 h after LPS treatment. The results showed that geraniin significantly attenuated LPS-induced pathological changes in the lung. Geraniin also inhibited LPS-induced macrophages and neutrophils infiltration in the lung. Geraniin significantly attenuated LPS-induced elevation of MPO level. LPS-induced TNF-α, IL-6 and IL-1β production were markedly suppressed by treatment of geraniin. Furthermore, geraniin inhibited NF-κB activation in LPS-induced ALI. In addition, geraniin was found to up-regulate the expression of Nrf2 and HO-1. In conclusion, these data suggested that geraniin had therapeutic effects in LPS-induced ALI by inhibiting NF-κB and activating Nrf2 signaling pathways.

Acute lung injury (ALI) is a critical pulmonary inflammatory disease that characterized by progressive hypoxemia, edema, and neutrophil accumulation in the lung [1]. Previous studies have suggested that Lipopolysaccharide (LPS) was the major stimulus of ALI and inflammation played a critical role in the pathogenesis of ALI [2]. LPS could induce the production of inflammatory mediators via NF-κB signaling pathway [3]. These inflammatory mediators amply the inflammatory response and lead to lung injury [4]. ALI is often associated with high morbidity and mortality in ill patients [5, 6]. Despite recent advances in intense care research of acute lung injury, its incidence remains high [7, 8]. Therefore, an effective therapeutic option against ALI drug is urgently required. Nrf2, an important transcription factor, can be activated by redox-dependent stimuli. Previous studies showed that activating Nrf2 could regulate inflammatory and oxidative stress [9]. Furthermore, activating Nrf2 could inhibit lung injury [10]. Therefore, Nrf2 may used as a target in the treatment of lung injury.

Geraniin, a typical ellagitannin extracted from Phyllanthusurinaria Linn, has been reported to have anti-oxidant and anti-inflammatory activities [11]. Geraniin was found to inhibit LPS-induced inflammation in RAW264.7 cells [12]. Also, geraniin was found to inhibit LPS-induced THP-1 macrophages switching to M1 phenotype [13]. Furthermore, it has been reported that geraniin protected cells from H2O2-induced oxidative cell death [14]. In addition, studies showed that geraniin protected liver cells against ethanol induced cytotoxicity [15]. However, whether geraniin could protect against LPS-induced acute lung injury was uncertain. Therefore, we investigated the protective effects of geraniin on LPS-induced ALI in mice.

The effects of geraniin on inflammatory cells infiltration were measured in this study. As shown in Figure 1, compared with the control group, LPS significantly increased the numbers of total cells, neutrophils and macrophages. However, this increases induced by LPS was reduced with the administration of geraniin in a dose dependent manner. 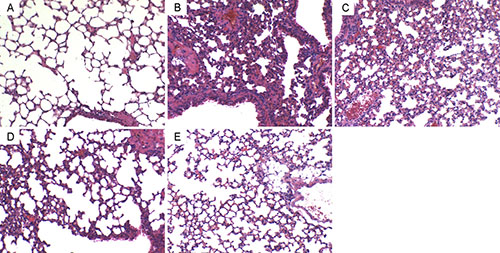 Effects of geraniin on MOP activity and lung W/D ratio 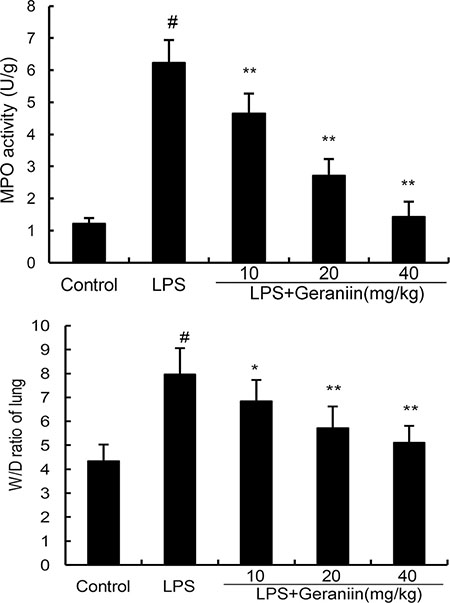 Effects of geraniin on cytokine production in BALF 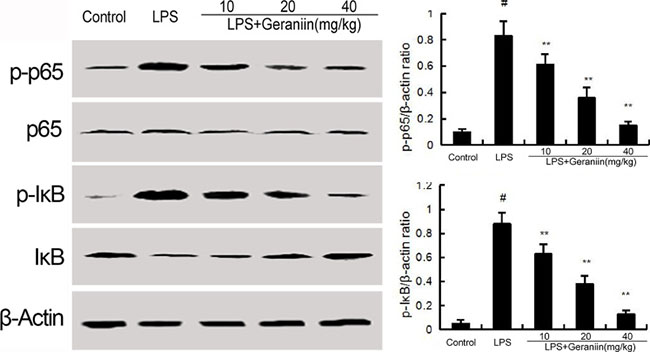 Effects of geraniin on HO-1 and Nrf2 expression 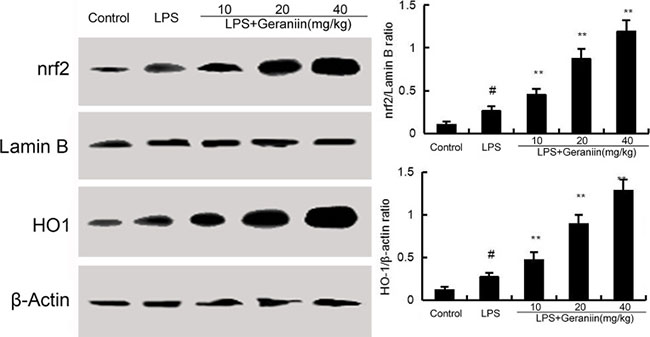 In this study, we report for the first time that geraniinhas therapeutic effect against LPS-induced ALI. Geraniin attenuates LPS-induced ALI by inhibiting inflammatory mediators production. The pharmacological actions of geraniin were associated with the activation of Nrf2 and inhibition of NF-κB signaling pathways.

A growing body of studies showed that NF-κB signaling pathway played an important role in the pathophysiology of ALI [21]. In our previous study, we found that inhibition of NF-κB could protect sepsis-induced ALI in mice [22]. Normally, NF-κB is located in the cytoplasm with inhibitory protein IκB. LPS could induce NF-κB p65 dissociates from IκB. Then, NF-κB p65 translocates into the nucleus to induce the expression of inflammatory cytokines [23, 24]. Inhibiting of NF-κB signaling pathway could attenuate LPS-induced ALI by inhibiting inflammatory cytokines production [25, 26]. To clarify the anti-inflammatory mechanism of geraniin, the effects of geraniinon NF-κB activation were measured. The results suggested that geraniin significantly inhibited LPS-induced NF-κB activation. The transcription factor Nrf2 regulates the expression of antioxidant genes [27] and previous studies suggested that Nrf2 affected the severity of acute lung injury [28]. Studies showed that deletion of Nrf2 in airway epithelium exacerbated acute lung injury and attenuated the inflammatory response [29]. In addition, it has been reported that activation of Nrf2 could attenuate LPS-induced lung injury [30]. In previous study, our results showed that eriodictyol protected LPS-induced ALI by activating Nrf2 [31]. These results suggested that Nrf2 had protective effects against acute lung injury. In this study, our results showed that geraniin up-regulated the expression of Nrf2 and HO-1 in a dose dependent manner. These results suggested that geraniin protected against LPS-induced lung injury by activating Nrf2 signaling pathway.

BALB/c mice (6–8 weeks) were purchased from the Center of Experimental Animals of Capital Medical University (Beijing, China). The mice were received a standard diet and housed in a room with controlled temperature. The mice were adapted the environment for 7 days. All animal experimental procedures were approved by the Committee of Animal Experimentation of the Capital Medical University.

Sixty mice were randomly divided into five groups and each group contains 12 mice. Group A, the control group; group B, LPS group; group C to E, LPS+geraniin (10, 20 and 40 mg/kg) groups. The mice of Group B were received with 50 μL LPS given byintranasally (i.n.). The mice of C to E groups were received with 50μL LPS given byintranasally (i.n.). 1 h later, geraniin (10, 20 and 40 mg/kg) was given to mice. The doses of geraniin were based on previous study [32]. The mice of Group A were given equal amount of PBS. 12 h after LPS treatment, the mice were killed and the BALF were collected. We chose 12 h after LPS treatment was based on previous studies [33].

Lung tissue was fixed with 10% buffered formalin for 12 h, paraffin embedded and cut into 5-μm sections. After the section were stained with hematoxylin and eosin (H&E), the sections were observed with a microscope (Olympus, Tokyo, Japan), as described previously.

12 h after LPS treatment, the mice were killed and the BALF were collected. The number of total cells was counted using a hemocytometer. The numbers of neutrophils and macrophages in BALF were stained with the Kwik-Diff staining set (Thermo, USA).

Specific ELISA kits (BioLegend, CA, USA) were used to quantify TNF-α, IL-1β, and IL-6 in the BALF. The standard curve was established according to the standards provided by the kits.

Total proteins from lung microglia were extracted by M-PER Mammalian Protein Extraction reagent (Thermo, USA). Samples with equal amounts (40 μg) of protein were fractionated on 10% SDS-polyacrylamide gel and transferred on nitrocellulose membranes. The membranes were blocked with 5% bovine serum albumin. Then, the membranes were probed with the primary antibodies and secondary antibodies at room temperature. The proteins were measured using the ECL detection reagents (BioLegend, CA, USA).

Data are expressed in terms of mean ± SD. Data were analyzed by using one-way analysis of variance followed by post-hoc Dunnett’s test with a significancelevel of p < 0.05. Statistical analyseswere performed using the SPSS software package.

This work was partly supported by a grant (SF-2016-2-1052) from the Capital health development research and special projects of Beijing (Risk factors and prediction score of acute respiratory distress syndrome after cardiac surgery).

19. Strieter RM, Kunkel SL. Acute lung injury: the role of cytokines in the elicitation of neutrophils. Journal of investigative medicine. 1994; 42:640–651.