Epidemiology and survival outcome of breast cancer in a nationwide study

According to GLOBOCAN 2012, breast cancer is the second most common cancer and the fifth most common cause of cancer deaths worldwide, with an age-standardized incidence rate (ASR) of 43.3 per 100,000 women-years and a worldwide mortality rate of 12.9% in 2012 [1]. The breast cancer incidence rate was considerably lower in Eastern Asia than in Northern America and Europe (ASR: 27.0, 91.6, and 71.1 per 100,000 women-years, respectively). Similarly, the breast cancer mortality rate was also lower (ASR: 6.2%, 14.8%, and 16.1%, respectively). In Asia, reports have indicated that the annual incidence of breast cancer has doubled or tripled over the past two decades. In Asia, the onset of breast cancer tends to occur at a younger age and more estrogen receptor (ER) positive or progesterone receptor (PR) positive subtypes, associated with a more favorable clinical-pathological outcome [2]. The etiology of breast cancer has generally been attributed to genetic, reproductive, and hormonal factors. In a breast cancer risk study conducted in Taiwan by Chuang et al. [3], estrogen-related factors, such as obesity, endometriosis, uterine myoma, hypertension, and dyslipidemia, were identified as important risk factors for patients with breast cancer. The known risk of female breast cancer includes BRCA1 or BRCA2 mutation, chest radiation exposure < 30 year, dense breast density, abnormal breast biopsy, family history of ovarian or breast cancer, late parity (age > 30 year) or nulliparity, early menarche (age < 12 year) or late menopause (age > 55 year), hormone-replacement therapy, postmenopausal obesity, white race, alcohol consumption and smoking [4]. In order to risk stratification of breast cancer for population-based screening, the Gail model was developed in 1989 to calculate an individual’s combined risks of developing invasive breast cancer [5]. The Gail model was used widely since then but it is known to overestimate breast cancer risk for Asian women [5]. The updated Korean model proposed by Min et al. in 2014 [6], including risk factors of age, body mass index, menopause status, breast feeding, family history, previous breast test and age at first delivery, showed a better performance than the other models for Asian women.

Study population and socioeconomic status of patients with breast cancer

The study population comprised 22,080,199 registered NHI beneficiaries in Taiwan between 1997 and 2013. Of these, 125,253 female patients with breast cancer were identified. The average age of subjects was 52.57 ± 12.21 years. Patient baseline characteristics are presented in Table 1. Women living in rural areas comprised only one-third of breast cancer cases, while women in urban and suburban areas each represented one-third of cases. Furthermore, the prevalence of breast cancer was lower among women with lower income (quintile 1 and 2, total 30.83%) than among women with higher income (quintile 4 and 5, total 39.4%). The socioeconomic analysis indicated that breast cancer was more prevalent in high-income urban areas in Taiwan.

Table 1: Clinical characteristics of patients with breast cancer from 1997 to 2013

Prevalence and incidence of breast cancer between 1997 and 2013

Table 2: Crude and age-standardized prevalence and incidence of breast cancer from 1997 to 2013 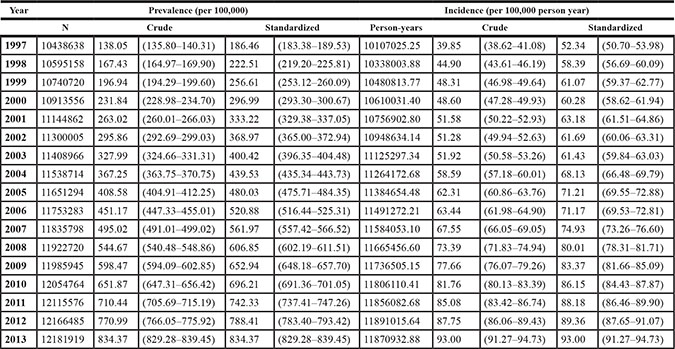 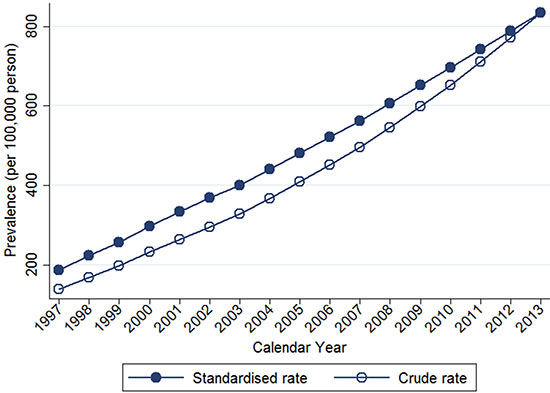 Figure 1: Trends of crude and age-standardized prevalence of breast cancer in Taiwan, 1997-2013. 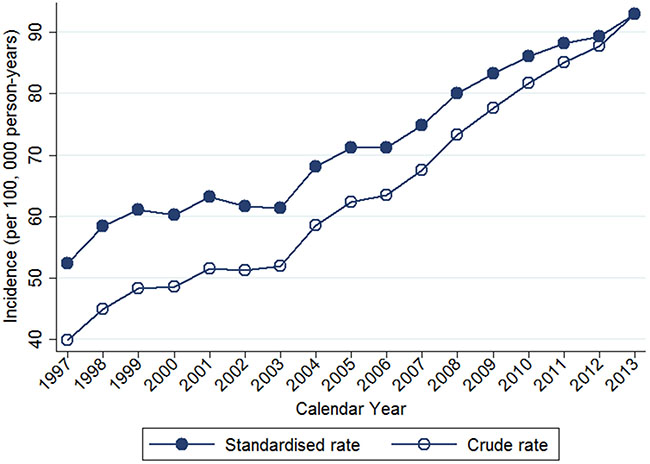 Figure 2: Trends of crude and age-standardized incidence of breast cancer in Taiwan, 1997-2013. 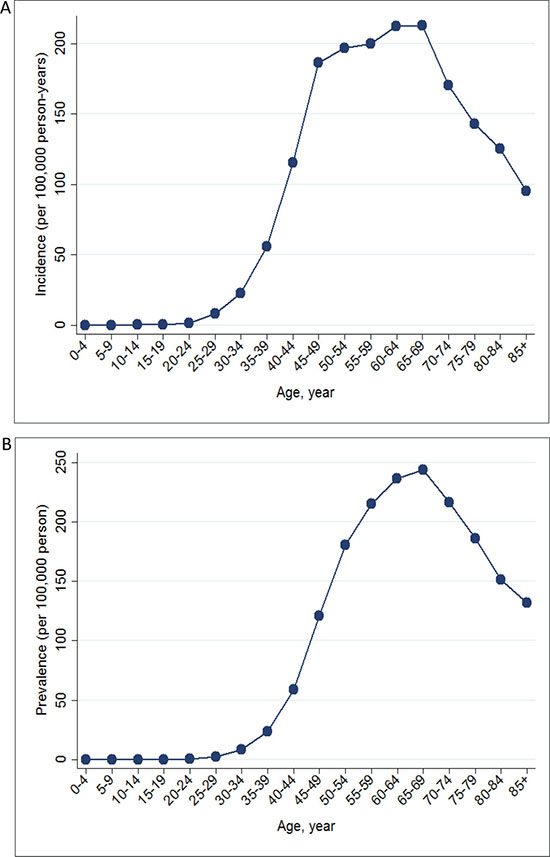 Figure 3: Age-specific prevalence (A) and incidence (B) of breast cancer in Taiwan in 2013.

Table 3A: Joinpoint analysis of breast cancer incidence in Taiwan, 1997-2013 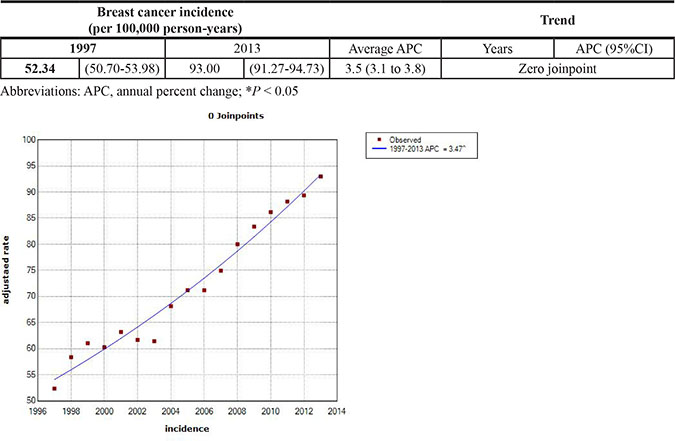 Table 3B: Joinpoint analysis of breast cancer prevalence in Taiwan, 1997-2013 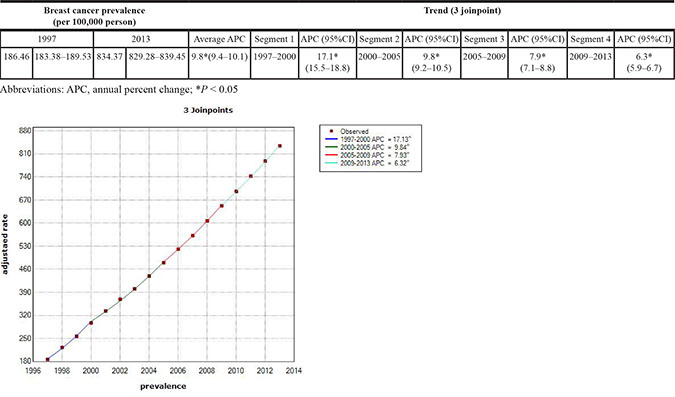 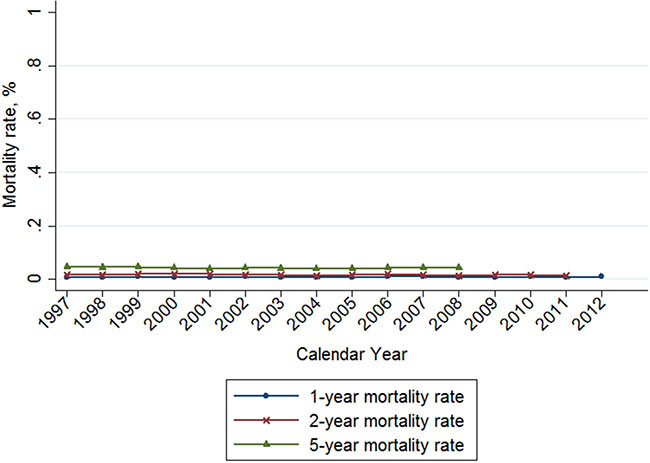 Four main intrinsic molecular subtypes of breast cancer have been identified based on the expression of ER, PR, human epidermal receptor-2 (HER2) [12, 13]. The loss of hormone receptor positivity and the switch to the triple negative phenotype after neoadjuvant therapy were associated with a worse patient outcome [14, 15]. The heritability of breast cancer has been estimated to be about 31% [16]. Known genetic factors contributing to a higher lifetime risk of breast cancer comprise rare variants in BRCA1, BRCA2, PALB2, ATM and CHEK2 [17]. Taken together, these genetic variants explain about 37% of the excess familial breast cancer risk [17]. Recent advances in sequencing technology have made panel multigene testing practical for risk stratification of invasive breast cancer according to genetic variants [18]. The clinical utility of several genomic tests such as 21-gene expression assay [19] or 70-gene signature [20] have been proved in prospective long-term clinical trials to better predict clinical outcomes.

Our study indicated that there was a rising trend in the prevalence and incidence of breast cancer in Taiwan, while mortality rates were essentially stable. These findings were consistent with epidemiological studies conducted in other countries [21, 26]. A study involving adult cancer patients, based on the Taiwan cancer registries database [11], found that between 2002 and 2012 the breast cancer incidence APCs in men and women were 4.9%, and -2.4% respectively, and the 5-year age-standardized relative survival rate was 82.8% in 2008. These findings are consistent with our results.

In countries with a universal health care system, higher socioeconomic status is associated with better overall survival, while lower socioeconomic status is correlated with increased cancer mortality [27–29]. Our socioeconomic status analysis showed a similar pattern, with a reduced prevalence of breast cancer cases in low-income rural areas. Furthermore, emerging treatment modalities have contributed to a reduction in breast cancer mortality rates, particularly in patients with multiple comorbidities. These advances may explain the significant improvement in the survival rate of the CCI > 1 group in our study.

There are several limitations to our study. The NHI released de-identified and encrypted data for public research, so there are no clues of clinical information on cancer staging or treatment modalities, which could only be obtained by the Taiwan Cancer Registry Database. However, we validated breast cancer diagnosis against the National Cancer Registry, a highly accurate source for the diagnosis of cancer. The agreement between the NHI database and the National Cancer Registry breast cancer diagnoses is excellent. Furthermore, NHI database has a 99.9% coverage of the population in Taiwan while the Cancer Registry Database had a 98.4% coverage of the population in 2012. These data are inherently complementary and are supported by consistent epidemiologic statistics between previous studies [11] and our results. Finally, the prevalence reported in this study was defined within a 10-year period, rather than a lifetime prevalence, which could be higher theoretically. Overall, we may have underestimated breast cancer prevalence rates but overestimated incidence rates.

Our primary data source was the NHI research database. This database routinely collected health data for all individuals eligible for NHI. By law, all citizens are required to enroll in the program, resulting in an exceptionally high population coverage rate of over 99%. Our study database comprised approximately 28 million (living and deceased) beneficiaries, registered between 1 Jan 1997 and 31 Dec 2013. The NHI diagnostic coding system follows the International Classification of Diseases, Ninth Revision, Clinical Modification (ICD-9-CM). The reliability, representativeness, and clinical consistency of this database have been reported previously. In Taiwan, patients with major illnesses, such as cancer, are entitled to a medical copayment waiver. A diagnosis from a specialist and a review by a commissioned expert panel are required for approval of the waiver. The registry of patients with catastrophic illness records the clinical and administrative information of patients receiving this waiver. We identified patients with breast cancer through the registry using an ICD-9 CM code of 174.9. Denominator data were based on the Registry of Beneficiaries, containing the demographics, insurance status, residence, and socioeconomic data.

Estimation of prevalence and incidence

The 95% confidence intervals (CIs) of prevalence and incidence were based on the assumption of Poisson distribution for the observed prevalent and incident cases. We used the Joinpoint Regression Program (version 4.0.4; National Cancer Institute, Bethesda, MD, USA) to estimate trends in the prevalence and incidence of breast cancer. The Bayesian information criterion was used to generate different ‘joinpoints’ when the linear trend of prevalence and incidence of breast cancer changed significantly and to determine the best-fit situations. Average annual percentage changes (AAPCs) for each segment were calculated. The significance level was set at 0.05. All statistical analyses were conducted on SAS statistical software, version 9.3 (SAS Institute, Cary, NC, USA).