Pulmonary artery hypertension (PAH) is a rapidly progressive disorder, which leads to right heart failure and even death. Overactivity of the renin-angiotensin-aldosterone system (RAAS) and sympathetic nervous system accounts for the development and progression of PAH. The role of renal denervation (RDN) in different periods of PAH has not been fully elucidated. A single intraperitoneal injection of monocrotaline (MCT, 60 mg/kg) was used to induce pulmonary remodeling in male Sprague Dawley rats (n = 40). After 24-hour of MCT administration, a subset of rats underwent RDN (RDN24h, n = 10); after 2-week of MCT injection, another ten rats received RDN treatment (RDN2w, n = 10) and the left 20 rats were divided to MCT group with sham RDN operation (MCT, n = 20). Eight rats in Control group received intraperitoneal injection of normal saline (60 mg/kg) once and sham RDN surgery. After 35 days, tissue and blood samples were collected. Histological analysis demonstrated that the collagen volume fraction of right ventricle, lung tissue and pulmonary vessel reduced significantly in RDN24h group but not in the RDN2w group, compared with MCT group. Moreover, the earlier RDN treatment significantly decreased SNS activity and blunted RAAS activation. Importantly, RDN treatment significantly improved the survival rate. In summary, earlier RDN treatment could attenuate cardio-pulmonary fibrosis and therefore might be a promising approach to prevent the development of PAH.

Pulmonary artery hypertension (PAH) is a complicated and fatal disease. Although progress achieved during last two decades with the introduction of oral medical therapies, the prognosis of PAH remains poor, especially in patients with advanced right heart failure [1]. It is imperative to seek potentially new therapies that prevent the development and progression of PAH. In the past few years, many experiments have indicated an important role of the renin-angiotensin-aldosterone system (RAAS) and sympathetic nervous system (SNS), in particular aldosterone [2–7]. Recently, de Man F.S. et al. found that the progression of PAH was accompanied by systemic RAAS overactivity [2].

We [8] and other investigators [9, 10] have reported that renal denervation (RDN) has the ability to reduce SNS activity and rebalance RAAS. It is reasonable to investigate the impact of RDN on PAH. And limited experiments have discussed the optimal time for RDN to treat PAH. Using a rat model of monocrotaline (MCT) induced pulmonary remodeling, we sought to study these isssues. 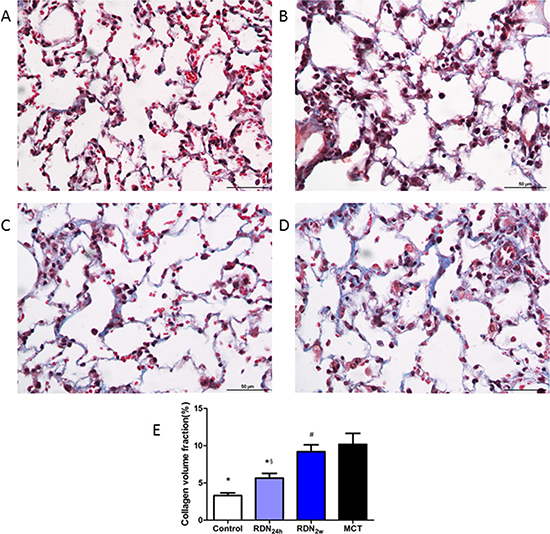 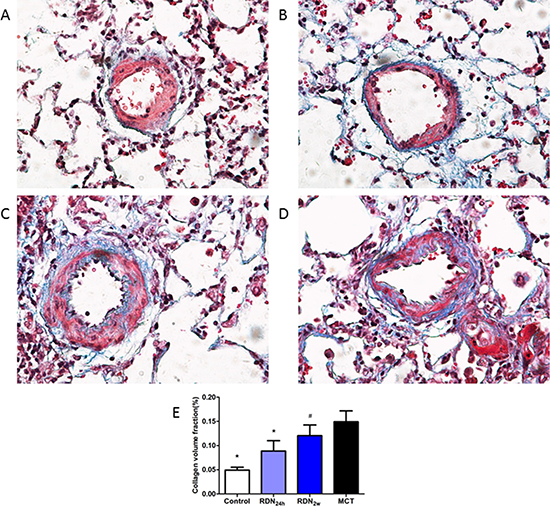 Fibrosis of right ventricle and cross-sectional area of heart

RDN surgery performed in the earlier stage of PAH resulted in significantly reduced RVAW thickness (1.00 ± 0.25 mm vs. 1.56 ± 0.20 mm, p < 0.05) compared with MCT group (Figure 3). Monocrotaline injection results in pulmonary arterial hypertension and right heart failure, which were accompanied by myocardial and pulmonary fibrosis. The cross-sectional area of myocardial interstitial fibrosis was inhibited by earlier RDN therapy (11.39% ± 5.00% MCT vs. 6.96% ± 4.09% RDN24h, p < 0.05) which was increased by monocrotaline injection. However, there are no significant differences between RDN2w group and MCT group (Figure 4). 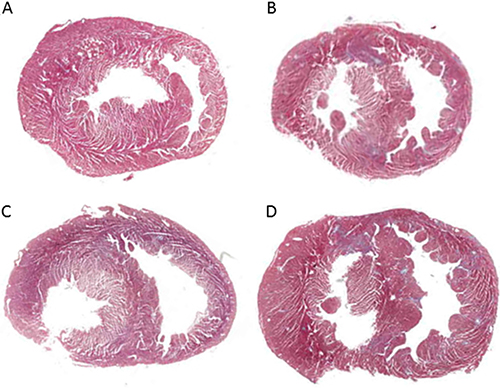 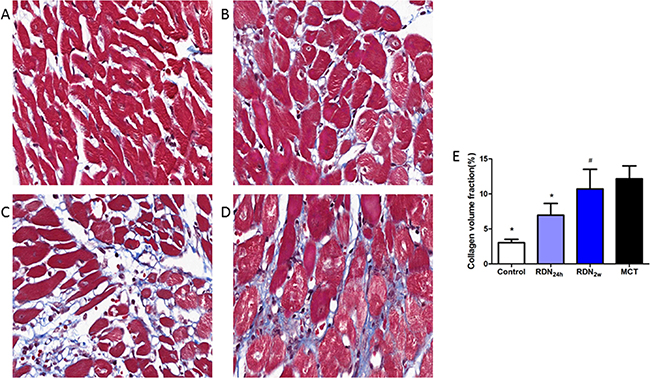 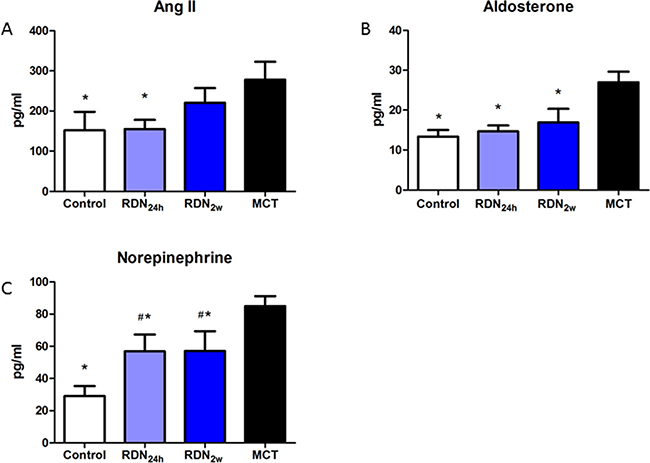 During the follow-up in the current experiment, 4 of 10 rats died both in the RDN24h and RDN2w group, and 13 of 20 animals died in the MCT group. None rats in the Control group died. On Kaplan–Meier survival analysis, after 35 days of follow-up, the rats treated with RDN (RDN24h and RDN2w) had higher survival rate (60% vs. 35%) than MCT group (Figure 6). 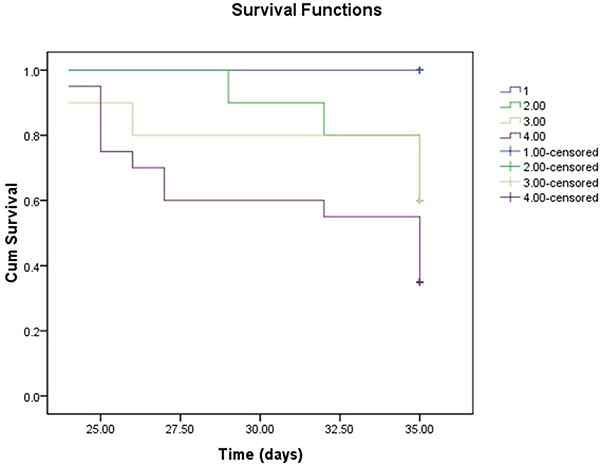 Figure 6: Kaplan-Meier survival analysis survival over the 35-day experiment was analyzed according to the daily recording of deaths by the standard Kaplan-Meier analysis with the log rank test.

MCT-induced pulmonary remodeling is a process from lung tissue and pulmonary vascular fibrosis to pulmonary hypertension, and then causes right ventricular remodeling and failure [11, 12]. In this process, neurohormonal systems such as the RAAS and SNS are up-regulated [2]. At 35 days, echocardiography revealed significant increases in right ventricular anterior wall thickness (RVAW) in MCT-induced pulmonary remodeling group compared with control. Compared with Control, MCT significantly increased the the Ratio of HW/BW of the rats. We observed high concentration plasma NE, out-of-balanced RAAS axis, and excessive collagen deposition of cardio-pulmonary. While RDN surgery performed in the earlier stage resulted in significant attenuation of MCT-induced disease progression.

Pulmonary remodeling is a transitional phase to pulmonary hypertension and right heart failure. Thus, it is of great importance to find a way to slow or even reverse the progression of pulmonary remodeling. Velez-Roa S et al. have reported that the activity of SNS was increased in patients with pulmonary hypertension, and sympathetic activation participated in pulmonary arteriolar remodeling [7]. Previous data revealed that β-blockers could delay the progression toward right heart failure, and partially preserves right ventricular function in pulmonary hypertension [13, 14]. Linz D et al. had reported that RDN reduced tyrosine hydroxylase-positive sympathetic nerve staining and resulted in lower norepinephrine levels [15]. In recent studies, they had reported that pulmonary artery denervation induces permanent sympathetic nerve injury and subsequent improvements in hemodynamics and pulmonary remodeling in humans and animals with pulmonary hypertension [11, 16, 17]. In our prior study, we also found that RDN could regulate the expression of β1,2-receptors, which contribute to inhibit cardiac remodeling [8]. In accordance with these studies, we concluded that RDN significantly reduced NE level. The involvement of the RAAS in myocardial fibrosis is evident in several pathological conditions such as hypertensive heart disease [18], congestive heart failure [19] and myocardial infarction [20]. There is experimental and clinical evidence indicating that activated RAAS is involved in the pathophysiology of pulmonary hypertension [2, 21–23]. Ang II, the major effector peptide of the RAAS, promotes vasoconstriction, inflammation, proliferation and fibrosis within the lung [24, 25]. And plasma aldosterone levels were elevated in experimental models of pulmonary hypertension and humans with the disease [26, 27]. The persistently elevated level of aldosterone initiates signaling pathways that promote vascular remodeling, impair vascular reactivity, and contributes to right ventricular dysfunction [28]. We [8] and others [9, 10] had reported that RDN could reduce SNS activity and rebalance RAAS. In this regard, RDN has been of extreme significance when evaluating the effects of direct reducing SNS and RAAS activity. In our current study, we found a prominently beneficial effect of RDN in the earlier phase of disease process. What of particular interest was that RDN inhibited cardiopulmonary fibrosis and slowed down the progression of right heart failure. But treatment with RDN in the later period of MCT-induced pulmonary hypertension had no significant influence on pulmonary hemodynamics and remodeling of cardiopulmonary.

The prominent reversal of cardiopulmonary fibrosis is a remarkable and noteworthy effect of RDN treatment. Fibrosis is a common pathway to organ injury and failure [29]. We observed a 44.6% reduction of lung fibrosis, 40.5% reduction in pulmonary vascular fibrosis and 38.9% reduction in right ventricular fibrosis following RDN at the 35-day time point. As deposition of fibrous tissue in heart or lung is associated with the increasing risk of adverse cardiovascular events [30], the ability of RDN preventing fibrosis might contribute to a better prognosis of PAH.

Pulmonary hypertension is commonly associated with increased afterload, which causes maladaptive remodeling of the right ventricle, characterized by hypertrophy and fibrosis [31]. In addition, persistent pressure overload induces cardiomyocyte death and contractile dysfunction, which eventually leads to end-organ failure. The beneficial outcomes of RDN treatment were associated with decreased right ventricular remodeling and improved right heart function. But these beneficial effects were blunted when RDN performed in the later period.

Earlier RDN treatment in the process of PAH disease could improve right ventricular function and reduce cardio-pulmonary fibrosis, and it also improved survival rate in MCT-induced PAH. These experimental findings suggest that RDN should be further investigated as a potential approach for treating earlier stage of PAH.

We should acknowledge the limitations in our study. Firstly, we failed to measure mean pulmonary arterial pressure at the end of this study. At day 35, we tried to test RV pressure and pulmonary artery pressure using right heart catheterization, but many rats in MCT group died when we opened their chests, and the collected data were too few to be analyzed. However, MCT-induced PAH is a well-established model, and both the mortality and echocardiographic data indicated that MCT had worked. Meanwhile, pulmonary remodeling was substantiated by histological analysis. Secondly, whether RDN is superior to oral drugs needs future investigation.

All procedures in this study were performed in accordance with the Guide for The Care and Use of Laboratory Animals (National Institutes of Health publication 8th edition, 2011) and were approved by the Nanjing Medical University Experimental Animal Care and Use Committee. The experiment was performed in male Sprague-Dawley rats weighing 200 ± 20 g (Nanjing Medical University Laboratory Animal Center), caged individually at controlled temperature and humidity with a 12-hour light/dark cycle. Echocardiography was performed at baseline and week 5. MCT injection was performed after echocardiography at baseline. Forty-eight male Sprague Dawley rats were randomized into 4 groups. Group 1 consisted of 8 rats that received normal saline and sham RDN procedure (Control). Group 2 comprised 10 rats that received MCT and RDN after 24 hour of intraperitoneally injected with 60 mg/kg MCT (MCT+RDN24h). Group 3 comprised 10 rats that received MCT and renal denervation after 2 weeks of intraperitoneally injected with 60 mg/kg MCT (MCT+RDN2w). Group 4 comprised 20 rats that received MCT and sham renal denervation procedure (MCT). At the end of the study, after the second echocardiography work-up and blood collection, all animals were euthanized with an overdose of pentobarbital sodium (200 mg/kg) by intraperitoneal injection.

Cardiac structure and function were evaluated by echocardiography with Vevo2100-a high resolution imaging system (VisualSonics, Canada) with a MS-250, 16.0–21.0 MHZ imaging transducer at baseline and week 5. All of the rats were anesthetized by aether during the process of echocardiography work-up.

After perfusion with ice-cold PBS, the heart and lung were cut and fixed in 4% phosphate buffered formalin for 48–72 h at 4°C, then tissues were dehydrated and embedded in paraffin. The heart and lung tissues were fast frozen by liquid nitrogen, then moved to –80°C. Masson’s trichrome staining was performed to detect right ventricular and lung fibrosis. Five fields of each sample were randomly selected and collagen volume fraction (CVF) was assessed by Image-Pro Plus 6.0.

Blood samples were obtained by EDTA-tubes, and then centrifuged at 3000 rpm at 4°C for 10 minutes to separate the plasma which stored at –80°C for later use. Plasma norepinephrine (NE), aldosterone (ALD) and angiotensin II (Ang II) levels at day 35 were measured using enzyme linked immunosorbent assay (ELISA) kits, according to the manufacturer’s instructions (Uscn Life Science Inc, Wuhan, China).

Survival over the 35-day experiment was analyzed according to the daily recording of deaths by the standard Kaplan-Meier analysis with the log rank test.

In conclusions, RDN significantly prevents the overactivity of RAAS and SNS, and attenuates lung tissue, pulmonary vascular and right ventricular fibrosis in the earlier stage of pulmonary hypertension. Simultaneously, RDN improves the survival rate of PAH.

This study was supported by the Natural Science Fund of Health Administration of Jiangsu Province (No.H201302).