Background: Pancreatic cancer (PaCa) is the most lethal gastrointestinal (GI) tumor. Although many studies on differentially expressed miRNAs as candidate biomarkers of pancreatic cancer have been published, reliability of these findings generated from investigations performed in single laboratory settings remain unclear.

Materials And Methods: To comprehensively investigate the potential utility of miRNAs as biomarkers of the disease, we searched publications diagnosing PaCa using miRNAs from PubMed, Medline, Embase, Google Scholar and Chinese National Knowledge Infrastructure (CNKI) databases. The sensitivity (SEN), specificity (SPE), and summary receiver operating characteristic (SROC) curve were used to examine the overall test performance, and heterogeneity was analyzed with the I2 test.

Conclusions: Our analysis demonstrated that multiple miRNAs (SEN: 85%; SPE: 89%; AUC: 0.93) were more accurate for diagnosing PaCa than a single miRNA (SEN: 78%; SPE: 79%; AUC: 0.84), and future studies are still needed to confirm the diagnostic value of these pooled miRNAs for PaCa.

Pancreatic cancer (PaCa) is one of the most lethal and aggressive cancers, with most patients dying within one year after diagnosis and a less than 6% 5-year survival rate [1]. However, the 5-year survival rate for pancreatic cancer patients increases significantly with curative resection of early-stage disease [2]. K-ras, p53, serum CA19-9 and CEA have been the most widely used biomarkers for PaCa diagnosis [3, 4], but these biomarkers often lead to incorrect diagnosis for PaCa and other non-cancer pancreatic diseases (e.g., chronic pancreatitis) because of their unreliable sensitivity (SEN) and improper specificity (SPE) [4, 5], so that diagnosis of PaCa remains a major clinical challenge. There is therefore an urgent need to identify sensitive and specific biomarkers for early detection of pancreatic cancer. Thus, finding valid, reliable biomarkers for early detection and developing an objective molecular test for PaCa diagnosis will have clear clinical significance.

miRNA is a class of functional double stranded 18–24 nucleotide non-coding RNA molecules that decrease gene expression through translational inhibition or degeneration of target mRNA [6]. Tumor-associated miRNAs activate critical cancer relevant pathways and play key roles in the oncogenic process and are confirmed to be involved in the genetic networks regulating functional pathways in pancreatic cancer, which can be candidate biomarkers of PaCa [7, 8]. Although their diagnostic accuracy has been evaluated and several studies have obtained promising results, the possible application of miRNAs for diagnosing PaCa remains controversial due to wide-ranging values of SEN and SPE in these studies, which may lead to different results dependent on subjects’ ethnicities, sources of controls, types of miRNAs, and specimen. Relatively low diagnostic accuracy was found in studies applying single-miRNA profiling for the diagnosis of PaCa. For example, Zhao et al. investigated the value of miR-192 for the diagnosis of PaCa with an SEN of 76.0% and an SPE of 55.0% in an Asian population [9]. Carlsen et al. investigated the value of miR-375 for the diagnosis of pancreatic ductal adenocarcinoma (PDAC) with SEN of 77.0% and SPE of 66.0% [10], which revealed that in the plasma-miRNA population, miR-375 was increased in PDAC cases compared with patients with other pancreatic or gastrointestinal diseases. The diagnostic accuracy of miR-21 for PaCa was confirmed in another Asian population, with results exhibiting an SEN of 77.8% and an SPE of 66.7%, respectively [11]. Habbe et al. showed an SEN of 81.0% and an SPE of 98.0% in a Caucasian population for the diagnostic accuracy of miR-21 [12]. Moreover, Cote et al. investigated a set of miRNAs (miR-10b, miR-155, miR-106b, miR-30c, and miR-212) as biomarkers for the early diagnosis of PaCa with 95.0% SEN and 100.0% SPE [13]. We were motivated by these discordant results, which were generated from investigations performed in single laboratory settings with minimal evidence of reproducibility and independent validation in other laboratories [14], to conduct a meta-analysis to develop the diagnostic accuracy of miRNA assays for PaCa diagnosis. 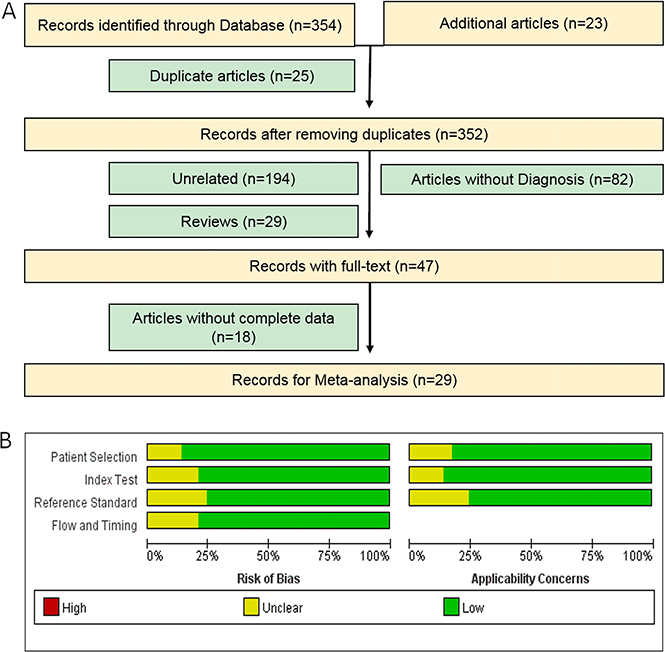 Table 1: The main features of included studies in meta-analysis 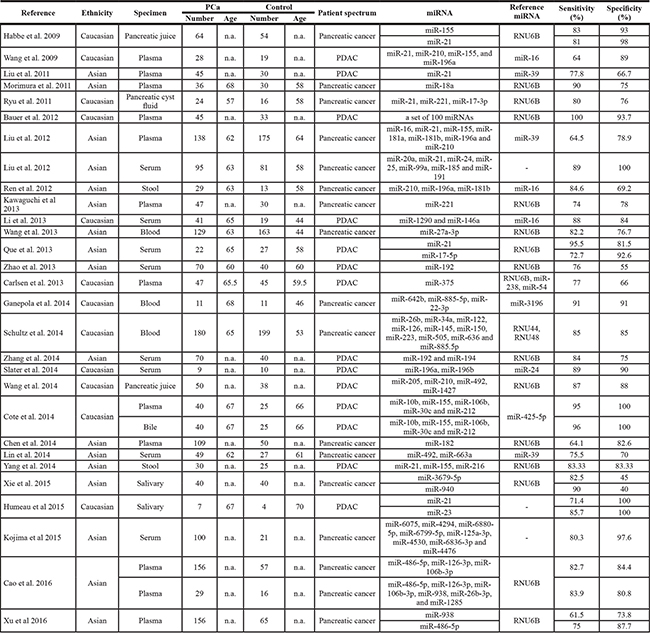 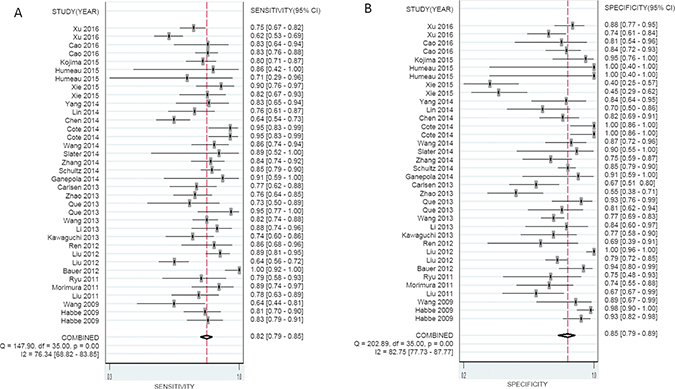 Figure 2: Forest plots of sensitivity (A) and specificity (B) with corresponding heterogeneity statistics for miRNA in the diagnosis of pancreatic cancer.

Figure 3: SROC curve with confidence and prediction regions around mean operating sensitivity and specificity points (A) and Deeks’ test for assessing publication bias (B) for miRNA in the diagnosis of pancreatic cancer.

Table 2: Summary estimates of subgroup analysis for miRNA in the diagnosis of pancreatic cancer

Diagnostic efficacy of multiple miRNAs and a single miRNA in PaCa 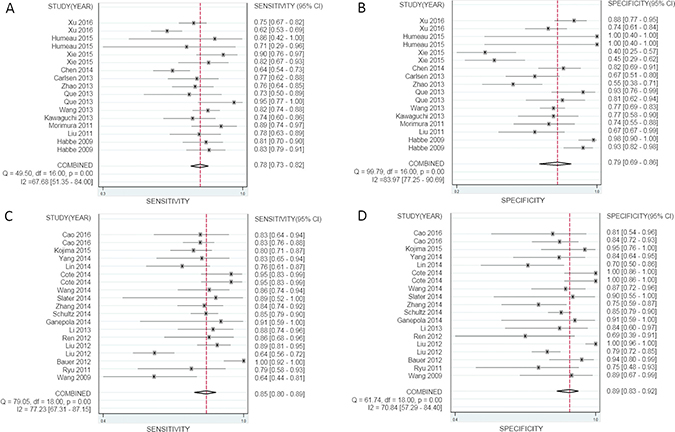 Due to increasing incidence, mortality and low survival rates of PaCa, screening is an urgent clinical challenge. However, accurate, affordable and repeatable detection methods are lacking. Even though miRNAs may have high diagnostic value [36], the clinical utility of miRNA for diagnosing pancreatic cancer remains disputable. There were more studies and participants included in this meta-analysis than Wan et al. [5] and Ding et al. [34]. In this study, we confirmed that miRNAs can be highly sensitive and specific diagnostic markers for PaCa. Higher accuracy was observed in multiple miRNAs profiling assays. We conducted this meta-analysis to evaluate the diagnostic accuracy of miRNA as a novel biomarker in diagnosing PaCa. A total of 36 studies in 29 articles conducted between 2009 and 2016 involving a total of 2225 PaCa patients and 1618 controls were involved in this meta-analysis. The meta-analysis revealed that the pooled SEN was 82% (95% CI, 79–85%) and the pooled SPE was 85% (95% CI, 79–89%).

AUC is widely used for evaluating the accuracy of diagnostic tests; numbers greater than 0.9, between 0.9 and 0.7, and 0.7 and 0.5 indicate high, moderate and low diagnostic values, respectively. We found that in our meta-analysis, the area under the SROC curve (AUC) was 0.89 (0.86–0.92), suggesting that miRNA has a high diagnostic value for pancreatic cancer. DOR, as an evaluation index of diagnostic tests, was used to determine the relationships between the chances of getting positive and negative results. Our results showed that the pooled DOR was 29.95 (95% CI, 15.69–42.94), indicating that the chance that a subject testing positive for a PaCa miRNA has pancreatic cancer is 29.95 times higher than for those testing negative, which is a higher DOR than that of the traditional markers in serum such as CA19-9 [37].

It is worth noting that multiple miRNA assays were more accurate in diagnosing PaCa than single miRNAs. In multiple miRNA assays, miR-21 [7, 11, 12, 15, 17–20, 23, 31], miR-155 [12, 13, 15, 18, 19, 31] and miR-210 [15, 18, 19, 21, 30] were used most frequently in the included studies. Moreover, we further found that the diagnostic accuracy of miRNAs to differentiate PDAC from controls (SEN:87%, SPE: 86%, AUC: 0.93) indicating a higher accuracy compared with applications on PaCa patients (SEN: 80%, SPE:83%, AUC: 0.86) (Table 2). We also performed a publication bias test and showed that there was no publication bias. We also analyzed the publication bias applying Deeks’ funnel plot asymmetry test. The p-value for the test was 0.47 for all miRNAs diagnosing PaCa (Figure 3B), 0.71 for a single miRNA diagnosing PaCa (Supplementary Figure 5A), and 0.50 for multiple miRNAs diagnosing PaCa (Supplementary Figure 5B), indicating that there was no publication bias. However, we also recognized that the following limitations of this meta-analysis should be considered in interpreting the results, such as heterogeneity among the 36 studies; differences in miRNA profiling methods; specimen resources; relevant studies that might have been missed, or have not yet been published online; no statistical data concerning African populations, etc.

In conclusion, our meta-analysis noted the practicability of miRNA for diagnosing PaCa, and demonstrated that multiple miRNAs had a relatively high diagnostic value for pancreatic cancer compared to single miRNA diagnosis. Future studies still need to confirm the accuracy of using multiple miRNAs as biomarkers for noninvasive screening and diagnosis of PaCa in clinical applications.

We performed our meta-analysis on the basis of the manuals of the Preferred Reporting Items for Meta-analyses (PRISMA). We conducted a document search for studies analyzing the diagnostic value of circulating miRNAs in patients with PaCa using PubMed, Medline, Embase, Google Scholar and Chinese National Knowledge Infrastructure (CNKI) databases. We identified the studies with the key words: (“pancreatic cancer” or “pancreatic tumor” or “pancreatic carcinoma” or “pancreatic neoplasm” or “pancreatic ductal adenocarcinoma”) and (“microRNA” or “miRNA”) and (“diagnosis” or “ROC curve” or “sensitivity” or “specificity”) up to October 1, 2016. We also scanned the reference of reviews and conference summaries in the initial search to find any additional acceptable articles.

A set of criteria was proposed for study inclusion. To be included, studies had to meet the following criteria: 1) patients with pancreatic cancer, 2) evaluate the diagnostic value of circulating miRNAs in PaCa, and 3) a diagnostic four-fold contingency table that could be calculated or extracted from the articles. The following exclusion criteria were: studies that were commentaries, reviews, or duplicate publications, studies unrelated to diagnosing pancreatic cancer using miRNA, and studies without complete data comparison groups.

This research was supported by a grant from the National Natural Science Foundation of China (81672383), a grant (16PJ1408800) from the Shanghai Pujiang Program, Shanghai, a grant (SHDC12014104) supported by Shanghai ShenKang Hospital Development Center for the establishment of early warning and emergency treatment technology for high pathogenic respiratory diseases, and a grant (15DZ2290200) from Shanghai Science and Technology Commission, China.

31. Yang J SY, Hua R. Screening and diagnostic value of the detection of microRNAs in stool of patients with pancreatic ductal adenocarcinoma. Journal of Hepatopancreatobiliary Surgery. 2014; 26:388–397.