Chronic lymphocytic leukemia (CLL) remains an incurable malignancy, urging for the identification of new molecular targets for therapeutic intervention. CLL cells rely on overexpression and hyperactivation of the ubiquitous serine/threonine protein kinase CK2 for their viability in vitro. CIGB-300 is a cell-permeable selective CK2 inhibitor peptide undergoing clinical trials for several cancers. Here, we show that CIGB-300 promotes activation of the tumor suppressor PTEN and abrogates PI3K-mediated downstream signaling in CLL cells. In accordance, CIGB-300 decreases the viability and proliferation of CLL cell lines, promotes apoptosis of primary leukemia cells and displays antitumor efficacy in a xenograft mouse model of human CLL. Our studies provide pre-clinical support for the testing and possible inclusion of CK2 inhibitors in the clinical arsenal against CLL.

Despite significant improvements in treatment outcome in recent years [1, 2], chronic lymphocytic leukemia (CLL) – the most common leukemia in the Western world – remains incurable [3, 4]. In addition, a significant fraction of patients does not tolerate the aggressive protocols that may prolong overall survival [5]. Thus, further understanding of CLL biology and pathophysiology are mandatory for the identification of new molecular targets and the development of rational, more efficient therapies against this malignancy.

The ubiquitous serine/threonine protein kinase CK2 is frequently overexpressed in cancer, including several hematological neoplasms [6-10]. Recently, we and others have shown that leukemia cells from CLL patients display higher CK2 expression and activity than normal B cells, leading to inhibition of PTEN and activation of PI3K signaling pathway [9, 10], which is required for CLL cell survival [11-13].

The accumulating evidence that tumor cells commonly rely on CK2 for their maintenance [14-16] stimulated the quest for new classes of CK2 antagonists [17] and drove the development of CK2 inhibitors for clinical application in cancer [18, 19]. CIGB-300 is a cell-permeable peptide that modulates CK2 activity by binding to the phosphoacceptor site on CK2 targets [18]. CIGB-300 demonstrated a dose-dependent antiproliferative and proapoptotic effect in a variety of tumor cells [20]. In vivo, both local and systemic administration of CIGB-300 elicited significant antitumor effects in murine syngeneic cancers and human tumors xenografted in nude mice [21]. Most importantly, phase I clinical trials in cervical cancer showed tumor reduction, and CIGB-300 was safe and well tolerated [22].

In the studies reported here, we used for the first time CIGB-300 to pre-clinically evaluate the potential of CK2 inhibition in CLL treatment.

Based on previous data showing that PI3K-mediated signals are required for survival of CLL cells in vitro [11, 13, 23], and that CK2 positively regulates PI3K pathway in CLL [9-11], we started by evaluating the impact of CIGB-300 on the interplay between CK2 and PI3K signaling. First, we confirmed that the peptide efficiently prevented phosphorylation of the direct CK2 target residue S129 on Akt/PKB (which leads to increased catalytic activity of already activated Akt) [24] in the MO1043 CLL cell line (Figure 1A) and in primary CLL cells (Figure 1B). Then, in accordance with results of other CK2 inhibitors, we found that incubation of CLL cells with CIGB-300 downregulated S380 PTEN phosphorylation, particularly in the MO1043 CLL cell line (Figure 1A) and also, albeit to a lesser extent, in primary CLL cells (Figure 1B). Decreased PTEN phospho-S380 is a reliable indicator of augmented PTEN lipid phosphatase activity [8, 25] and consequent decrease in PI3K signaling pathway activation. Accordingly, phosphorylation of PI3K downstream targets Akt/PKB and GSK-3β decreased after treatment with CIGB-300 (Figure 1A,B). 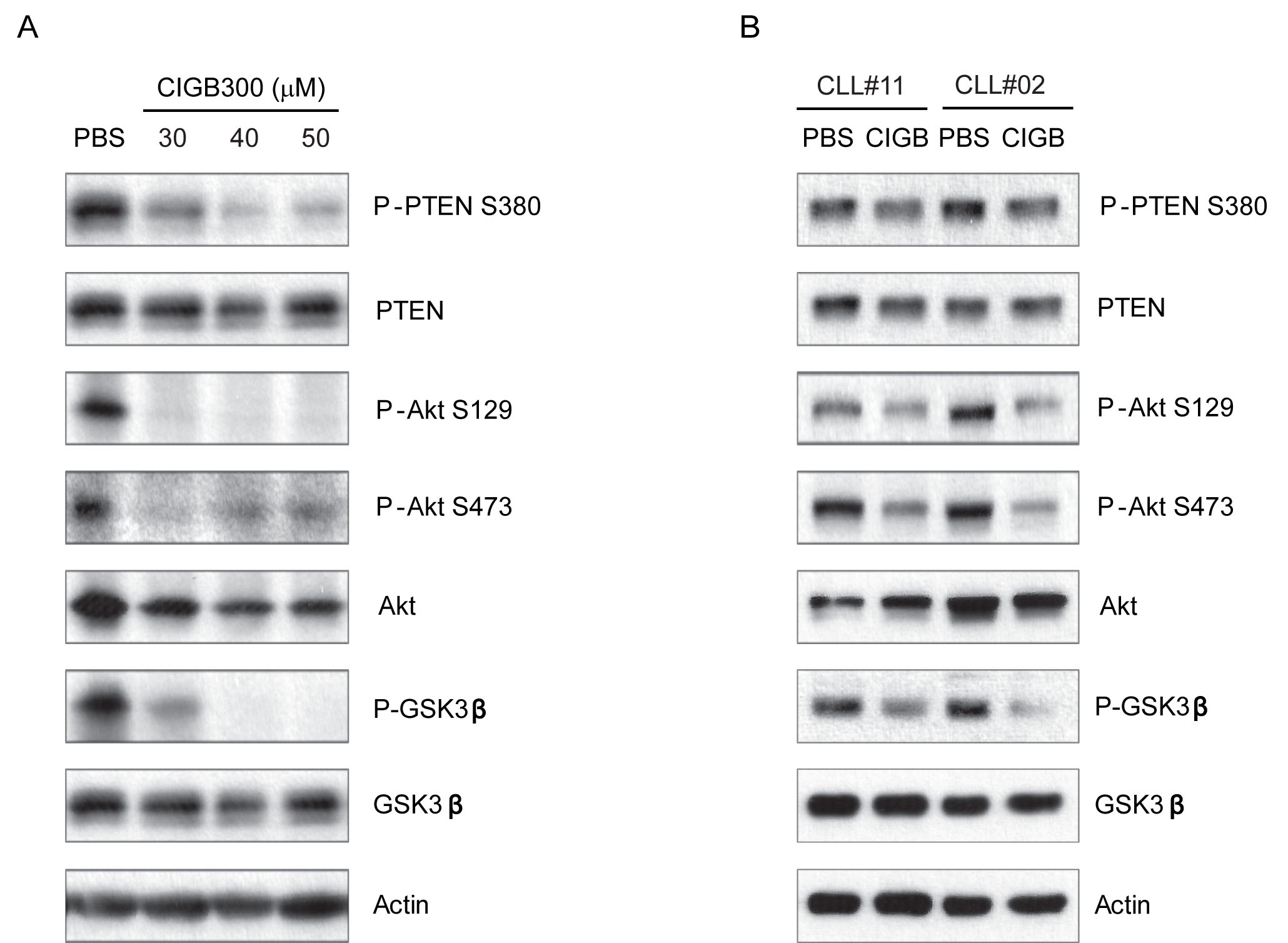 Next, we sought to evaluate whether these molecular observations translated into functional impact on CLL cell viability and proliferation. The CLL cell lines MEC1, WaC3CD5, JVM3 and MO1043 were cultured with increasing concentrations of CIGB-300 and cytotoxicity was analyzed at 72h by Alamar blue assay. The IC50 of CIGB-300 on these cells ranged between 27 and 38µM, which is comparable to that of solid tumor cell lines displaying sensitivity to the inhibitor in vivo [18] (Figure 2A). A more detailed analysis revealed that both viability and proliferation of CLL cell lines decreased in a time- (not shown) and dose-dependent manner (Figure 2B,C and data not shown). The dose- and time-dependent impact of CIGB-300 extended to primary CLL samples collected from the peripheral blood of patients (Fig. 3A). Notably, 12.5µM CIGB-300 were sufficient to induce a dramatic decrease in viability in all CLL patient samples analyzed, even in poor prognosis cases such as those with 11q deletion (Fig. 3B and Table 1). To better define the therapeutic potential of the drug, we next assessed whether the effect of CIGB-300 on primary CLL cells is counteracted by stromal support. Culture with the murine stromal cell line OP9 enhanced the viability of primary CLL cells, as expected, but it did not reverse the pro-apoptotic effect of CIGB-300 in any of the CLL samples analyzed (Figure 3C).

Figure 2: CIGB-300 decreases the viability and proliferation of CLL cell lines. (A) CLL cell lines were incubated with increasing concentrations of CIGB-300 and IC50 was determined for each cell line at 72h with an AlamarBlue® assay. (B-C) MO1043 cells were cultured for 48h with the indicated CIGB-300 concentrations. Viability (B) and percentage of cells in S-phase (C) were assessed by FACS after annexin V/7-AAD staining and analysis of BrdU incorporation, respectively. Results indicate mean ± SD and are representative of 3 experiments analyzed.

Table 1: Clinical and biological characteristics of the patients analyzed.

*Apart from CLL patient #12, which finished treatment 3 months before sample collection, none of the patients analyzed received previous treatment.

To further evaluate the clinical potential of CIGB-300, we xenotransplanted MO1043 cells subcutaneously into nude mice as described in the ‘Methods’. CIGB-300-treated mice presented a significant delay in tumor growth compared with the control group. The difference between groups was evident after approximately 1 week of treatment and became more significant with time (P<0.001, two-way ANOVA, Figure 4). Importantly, none of the mice showed weight loss or other toxicity-related symptoms throughout the experiment (not shown). These results suggest that targeting CK2 using CIGB-300 may be a valid therapeutic strategy in CLL. 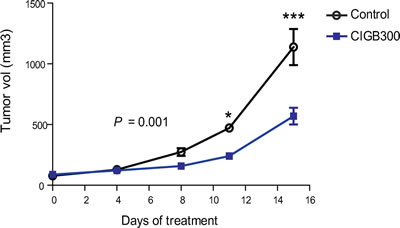 We and others previously showed that CK2 is a critical regulator of CLL cell viability [9-11]. However, those studies were conducted either after silencing of CK2 or using drugs that are not appropriate for in vivo administration [9-11] and therefore have limited clinical relevance. By contrast, in the present studies we explored for the first time the pre-clinical value of CIGB-300, a CK2 inhibitor that has already undergone clinical trials for other cancers and has demonstrated to be safe when used at clinically effective concentrations, with only mild to moderate toxicities [20].

We showed that treatment with CIGB-300 inhibited the viability and proliferation of CLL cell lines with IC50 values that are within a clinically suitable range. Moreover, CIGB-300 promoted apoptosis in all the primary CLL samples we analyzed, in a dose and time-dependent manner. Although anecdotal, it is noteworthy that this effect was evident even in one CLL case that presented del11q, which associates with poor prognosis and resistance to chemotherapy [26, 27]. Importantly, we also noted that stromal support by OP9 cells did not confer resistance against CK2 inhibition to primary CLL cells. These observations are in line with the in vivo effects of CIGB-300, which showed a clear delay in tumor development. Whether combination of CK2 inhibitors may synergize with novel targeted therapies [4] and contribute to the eradication of CLL is an exciting possibility that warrants further investigation.

Primary T-cell acute lymphoblastic leukemia [8] and CLL [9] cells display high levels of phosphorylation of PTEN (indicative of PTEN posttranslational inactivation) mediated by CK2. We found that CIGB-300 promoted PTEN activation and decreased the phosphorylation of Akt, a major PI3K downstream target. This notwithstanding, it should be underlined that PI3K signaling abrogation is probably just one of the mechanisms, albeit of critical importance, by which inhibition of CK2, a pleiotropic kinase that regulates numerous functions, may contribute to apoptosis of CLL cells. In fact, the pleiotropy of CK2 may be a fundamental cause for the addiction to CK2 activity displayed by tumor cells, and it is a key reason why, given the observations that CK2 inhibition does not result in intolerable side-effects, CK2 is a very promising therapeutic target in the context of cancer in general and CLL in particular.

In summary, our current data using CIGB-300, together with our parallel study demonstrating the pre-clinical efficacy of the CK2 small molecule inhibitor CX-4945 [28], constitute strong evidence for the therapeutic potential of CK2 inhibition in the context of CLL and pave the way towards the clinical evaluation of these and other CK2 antagonists in this malignancy.

Peripheral blood (PB) samples from CLL patients were collected in accordance with the Declaration of Helsinki after informed consent and ethical approval of Instituto Português de Oncologia (Lisbon, Portugal). Table 1 summarizes the clinical and biological characteristics of the patients analyzed. CLL cells were isolated from PB using RosetteSep human B cell enrichment cocktail (StemCell Technologies) as indicated by the manufacturer. The purity of CLL cells was always higher than 90%, as evaluated by staining with anti-CD5, CD3 and CD19 fluorochrome-conjugated antibodies (eBioscience) followed by flow cytometry analysis using a FACSCanto cytometer (Becton Dickinson).

CLL cells were cultured as described [9, 28], and treated with CIGB-300 where specified. Viability was determined by flow cytometry after staining with Annexin V-APC (eBioscience) and 7-AAD (Becton Dickinson) [9]. Cytotoxicity was determined using AlamarBlue assay. Briefly, cell lines were seeded in flat bottom 96-wells plates under the culture conditions described above and indicated concentrations of CIGB-300 were added. Following 3 days of incubation with CIGB-300, Alamar Blue (Life Technologies) was added to cell cultures in an amount equal to 10% of the culture volume. Cells were further incubated at 37ºC, 5% CO2 for 2-4 hours. Fluorescence was measured at wavelengths of 530nm excitation and 580nm emission in an Infinite M200 plate reader (Tecan).

Eight week-old swiss nude mice, full-body irradiated with 600cGy the day before, were injected subcutaneously in the right flank with 5x106 MO1043 cells resuspended in 100µL of 50% Matrigel (Becton Dickinson) in PBS. At day 3, all mice presented palpable tumors (100-150mm3) and were randomly assigned into two groups (n=6 per group) to receive CIGB-300 intraperitoneal (ip) at 20 mg/kg or vehicle, once a day, for 5 consecutive days every week, for a total of 3 weeks. Mice were monitored daily and weighed frequently to determine possible treatment-induced toxicities. Tumors were measured every other day with a caliper and tumor volume was calculated (volume = length x width2 /2). Mice were sacrificed when tumor reached 1500mm3. Housing and treatment was in accordance with EU guidelines and institutional ethics committee approval.

We are grateful to all the patients that contributed to this study. We thank Dr. Riccardo Dalla-Favera for providing the MO1043 cell line and Dr. John Byrd for providing the WaC3CD5 cell line. We also thank the Helena Alaìz and Teresa Faria (Cytogenetics and Flow Cytometry sections of the Hemato-oncology lab at Instituto Português de Oncologia) for the cytogenetic and phenotypic characterization, respectively, of patient samples. This work was supported by the grant PIC/IC/83193/2007 from Fundação para a Ciência e a Tecnologia. LRM received an FCT-SFRH PhD fellowship.