As conventional biomarkers for defining breast cancer (BC) subtypes are not always capable of predicting prognosis, search for new biomarkers which can be easily detected by liquid biopsy is ongoing. It has long been known that cell-free DNA (CF-DNA) could be a promising diagnostic and prognostic marker in different tumor types, although its prognostic value in BC is yet to be confirmed. This retrospective study evaluated the prognostic role of CF-DNA quantity and integrity of HER2, MYC, BCAS1 and PI3KCA, which are frequently altered in BC. We collected 79 serum samples before surgery from women at first diagnosis of BC at Forlì Hospital (Italy) from 2002 to 2010. Twenty-one relapsed and 58 non-relapsed patients were matched by subtype and age. Blood samples were also collected from 10 healthy donors. All samples were analyzed by Real Time PCR for CF-DNA quantity and integrity of all oncogenes. Except for MYC, BC patients showed significantly higher median values of CF-DNA quantity (ng) than healthy controls, who had higher integrity and lower apoptotic index. A difference nearing statistical significance was observed for HER2 short CF-DNA (p = 0.078, AUC value: 0.6305). HER2 short CF-DNA showed an odds ratio of 1.39 for disease recurrence with p = 0.056 (95% CI 0.991-1.973). Our study suggests that CF-DNA detected as liquid biopsy could have great potential in clinical practice once demonstration of its clinical validity and utility has been provided by prospective studies with robust assays.

Breast cancer (BC) is the principal cause of cancer death in women worldwide.

As BC is a systemic disease at diagnosis, chemotherapy and hormonal therapy are usually given to eradicate any potential presence of occult micrometastasis after radical surgery, reducing the risk of relapse and improving overall survival according to validated prognostic factors [1].

Despite the locoregional and systemic treatment, 30% and 50% of the patients with negative and positive axillary lymph nodes, respectively, relapse after five years of surgery [1].

To date there are no recommended serum markers in clinical practice for monitoring patients and predicting their risk of relapse [2].

Further research is therefore needed to detect through liquid biopsy the biomarkers that can early identify patients at high risk of relapse and set appropriate systemic treatment, especially when clinical and instrumental evidence is not available.

Studies have long suggested that cell-free DNA (CF-DNA) could be used as a potential prognostic biomarker also for metastatic spread in solid tumors [3–6]. However, the lack of a standardized method for its evaluation remains one of its main critical issues.

Some authors have demonstrated that the concentration of circulating CF-DNA is higher in cancer patients than in healthy individuals [7–8].

DNA is released into the bloodstream by the apoptotic and necrotic cells of the primary tumor from an early phase of the disease, allowing for the extraction of DNA and the determination of the genetic and epigenetic characteristics [9]. It is well known that apoptotic cells release DNA fragments of 180–200 base pairs whereas necrotic cells release higher molecular weight DNA fragments [9]. It has been shown that DNA from normal apoptotic cells is highly fragmented, whereas DNA from necrotic cancer cells maintains its integrity. We evaluated the Apoptotic Index (AI) and the Integrity Index (II) as biomarkers to identify the patients likely to recur. The latter was calculated as the ratio of the quantity of long fragment/short fragment; the former was inversely calculated.

This retrospective study aimed to characterize CF-DNA as liquid biopsy for identifying patients at risk of relapse as a potential prognostic biomarker for all BC subtypes. We evaluated the role of some of the most frequently altered genes in BC (HER2, MYC, BCAS1 and PI3KCA) in relation to patient prognosis due to a possible correlation with CF-DNA quantity and integrity. 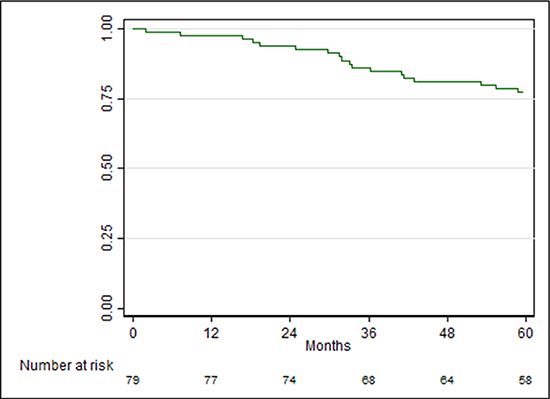 Clinical and histopathologic characteristics of patients in relation to prognosis are reported in Table 1.

Table 1: Patient clinic and histopathologic characteristics in relation to prognosis

Table 2: CF-DNA quantity (ng) in relation to the status (cancer/control)

Table 3: Integrity (II) and apoptotic (AI) indexes of each gene in relation to the status (cancer/control)

Table 5: Integrity (II) and apoptotic (AI) indexes of each gene in relation to patient prognosis

The relation between quantity of HER2 CF-DNA and HER2 positive BCs (HER2 FISH amplified and/or IHC positive with 3+ score) showed no significant difference (data not shown), neither HER2 index differed between the two HER2 types of BC (data not shown).

There is urgent need for markers detected as liquid biopsy able to identify patients at high risk of relapse or progression. Many studies have failed to demonstrate the use of circulating biomarkers in BC follow-up often due to non-reproducible methods and to the intrinsic biologic value of the marker considered [10].

The assessment of CF-DNA as liquid biopsy could have great potential in clinical practice. Prospective studies on NSCLC patients and tests for target therapies have demonstrated the clinical validity and utility of CF-DNA especially in this population [11]. Contrasting results have been reported on what to analyze in CF-DNA and how: different features have been studied in CF-DNA as biomarker, such as integrity, gene copy number variations, mutations [11–15].

Different subsets of patients, timing of sampling, and methodology make analysis of CF-DNA more difficult to standardize and validate. Moreover, high detection rates are not reproducible in early stages of cancer probably due to insufficient DNA quantity of low tumor burden [14, 15]. High false-positive results in benign lesions in some cohorts have produced discordant results on the specificity of CF-DNA detection at baseline [16, 17]. Not even all patients with progressive metastatic disease appear to release tumor-derived DNA into the bloodstream in quantities measurable with the current technologies, providing heterogeneous and inconsistent data on early BC and adjuvant setting [6].

Despite the limitations of the this study, among which are the retrospective design and the low number of samples, we demonstrated the feasibility of CF-DNA evaluation on serum samples stored for a long period of time. We analyzed only serum samples collected before surgery (baseline). Our results confirmed literature data [7, 8] as CF-DNA quantity was significantly higher in terms of quantity (ng) of HER2 short, BCAS1 and PI3KCA short in BC patients than in healthy controls.

Despite our expectations, healthy controls showed higher II and lower AI of BCAS1, MYC and PI3KCA oncogenes than BC patients, in accordance with Ellinger et al. [18]. The potential prognostic value of HER2 and PI3KCA as oncogenes has already been described. In particular, Garcia-Murillas and colleagues demonstrated that PI3KCA mutations detected in circulating tumor DNA can be related to microscopic residual disease that may help identify patients likely to recur [19]. In addition, Page and colleagues demonstrated the existence of amplified HER2 in CF-DNA on HER2 positive BC patients [20].

Our principal aim was to evaluate the prognostic role of CF-DNA in all BC subtypes. Yet we did not observe any role in predicting either relapse or progression. These findings were in accordance with Garcia-Murillas et al, who found that a mutational analysis of CF-DNA at baseline was not significantly associated with disease-free survival and risk of relapse [19].

Although this study showed no association between CF-DNA and prognosis, it is nevertheless useful for planning new prospective studies that take into consideration the time of sampling (pre-surgery, post-surgery, after and during therapy, over a long-term follow-up) and the molecular alterations by liquid biopsy, such as copy number variations, mutations and integrity of other genes.

A total of 79 serum samples were collected before surgery from women at first diagnosis of BC at the Breast Unit of the Morgagni-Pierantoni Hospital (Forlì, Italy) from 2002 to 2010. Twenty-one relapsed and 58 non-relapsed patients (approximately 1:3 ratio) were matched by subtype and age. Blood samples were also collected from 10 healthy donors. Recurrent disease in patients was defined as local, regional and distant relapse occurring at over 6 months of surgery.

The healthy control group, reporting neither previous disease nor cancer, was matched to the patients by gender and age. CF-DNA quantity and integrity analysis was performed blindly on all individuals and was evaluable for the entire case series.

From each patient, 5 ml whole blood was collected in tubes without anticoagulant prior to surgery and centrifuged at 2500 g for 15 min within 2 h of collection. The supernatants were transferred into cryovials and immediately stored at –80°C until use.

All Real Time PCR reactions were performed in duplicate on 10 ng of each DNA sample. Various amounts of DNA from the human genomic control (0.01, 0.1, 1, 5, 10 and 20 ng) were also analyzed to draw a standard curve. CF-DNA value for each sample was obtained by Rotor Gene 6000 detection system software using standard curve interpolation. Analysis was repeated whenever the difference between duplicate samples was > 1 cycle threshold. Real Time experiments were performed independently in duplicate on the same 8 samples to test assay imprecision. The coefficients of variation were then calculated for HER2, MYC, BCAS1 and PI3KCA long and short fragments.

The CF-DNA II was calculated as the ratio of quantity of long fragment/short fragment. The CF-DNA AI was 1/II.

Frequency tables were performed for categorical variables. Continuous variables were presented using median and range or iqr range. The relationship between clinic-pathological factors and prognosis was analyzed using a non-parametric ranking statistic test. Normality of data distribution was tested using Shapiro-Wilk test: data distribution was not normal and non-parametric statistical tests were used (Wilcoxon Mann-Whitney and chi-square test) to evaluate difference between relapsed/non-relapsed patients and between BC patients and healthy controls.

To evaluate the most discriminant cut-off values between relapsed and non-relapsed patients we used the receiver operating characteristic (ROC) curve analysis. True positive rates (sensitivity) were plotted against false positive rates (1-specificity) for all classification points.

Conditional logistic regression model was carried out to fully account for the structure of the data matched by histological subtype and age. OR and their 95% CI for patient prognosis were reported to identify factors independently associated with relapse of disease.

RFS was calculated from time of surgical treatment to time of disease relapse or death. p < 0.05 was considered statistically significant. Statistical analyses were carried out with STATA (version 14.1 for Windows, Stata-Corp, College Station, TX, USA).

The authors would like to thank Veronica Zanoni for linguistic support.

The study was approved by the Medical Scientific Committee of IRST IRCCS, the Ethics Committee of Area Vasta Romagna, Italy (approval no. 1267).