Colorectal cancer (CRC), including colon cancer and rectal cancer, is one of the most common human malignant cancers and the leading cause of death worldwide. Early diagnosis and treatment can markedly raise the survival rate of CRC patients from 15% to 90% [1]. Present methods of early diagnosis have many defects, thus exploring of highly sensitive and low-price early-stage diagnostic methods has great realistic values.

MicroRNAs (miRNAs) are small, 22-nucleotide endogenous non-coding RNAs found in plants, animals and some virus. miRNAs could suppress target gene expression at post-transcriptional level by binding to the 3’UTR of target mRNAs [2]. Their expression patterns have been used to diagnose various types of cancer [3–5]. Recent studies have demonstrated that human body fluid such as serum/plasma contains numerous stable miRNAs, potentially paving the way towards a novel class of cancer biomarkers [6–8]. microRNA-375 (miR-375) located in chromosome 2 functions as a cancer suppressor, which showed significant lower levels in alimentary canal cancers, such as esophageal squamous cancer, gastric cancer, liver cancer and pancreatic cancer [9–11]. In primary hepatic cancer, over-expression of miR-375 suppresses the expression of aeg-1, induces apoptosis and inhibits migration of the liver cancer cells [11]. miR-375 can suppress cell growth by arresting cancer cells in G0 phase in pancreatic cancer [12].

Our preliminary data revealed much lower levels of miR-375 in CRC carcinoma than in para-carcinoma tissue, suggesting that miR-375 might involve in cell growth or migration in CRC. However, the mechanism underlying miR-375 regulation remains unclear. Our study aims to investigate the target genes and related signal pathways of miR-375 in CRC.

JAK2, MAP3K8 and ATG7 are predicted target genes for miR-375

Our previous results showed that miR-375 has lower expression in CRC carcinoma tissues than that in para-carcinoma tissues, indicating miR-375 as a tumor suppressor. In order to test the target genes of miR-375 in CRC and the related signal pathways, we searched the databases miRTarBase, PicTar, TargetScan, miRecord and miRanda, and found that jak2, usp1, map3k8, timm8a, yap1, pdk1, atg7 are predicted to be the target genes of miR-375. The jak2 and map3k8 genes belong to jak2/stast3 and mapk/erk signaling pathways respectively, atg7 relates to autophagy pathway, and these pathways were reported to modulate tumor growth or metastasis. Next, we evaluated the transcriptional levels of these predicted target genes in carcinoma and para-carcinoma tissues, the real-time PCR data showed that the mRNA levels of jak2/stast3, mapk/erk and atg7/lc3b genes were significantly lower in carcinoma tissues than para-carcinoma tissues (Figure 1). Thus, we speculated that miR-375 might participate in the occurrence and development of CRC by regulating these targeted genes and related signaling pathways. To explore the mechanism underlying the miR-375 regulation, we focused on the miR-375’s influence on the expression of predicated genes and their downstream cascades, as well the cell proliferation and tumorigenesis in nude mice. 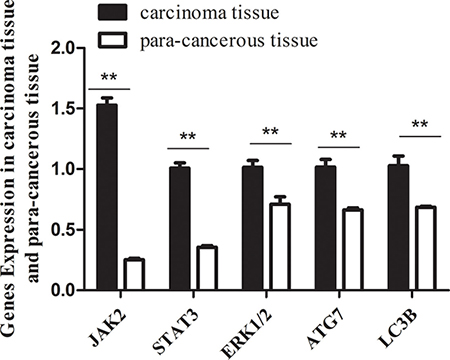 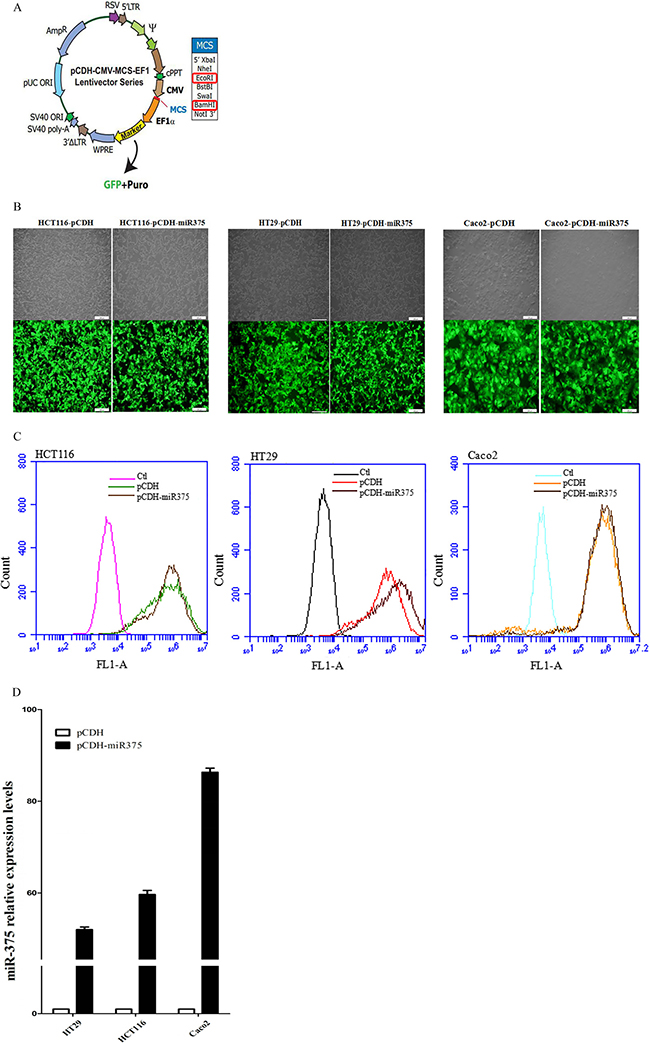 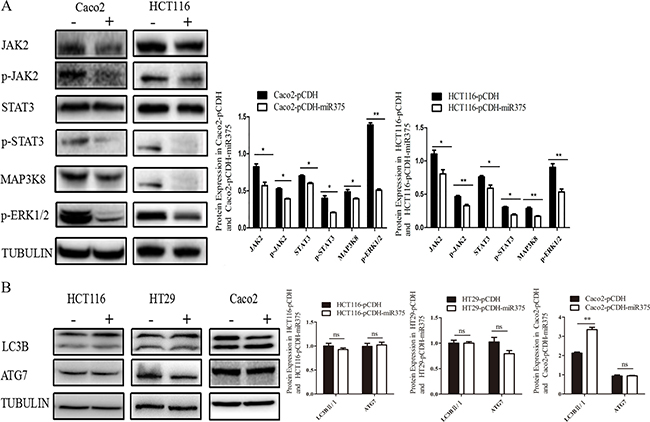 To explore whether miR-375 also regulate autophagy in CRC, we detected another target gene of miR-375—autophagy associated gene atg7 and LC3B-II/LC3B-I as autophagy indicator in these 3 cells lines. Western Blot results showing no significant change for ATG7 in miR-375 over-expressing HT29 and Caco2 cells, although increase of LC3B-II/I ratio indicated autophagy activation only in Caco2 cells. However, over-expression of miR-375 down-regulated ATG7 in HCT116 cells without autophagy suppression (Figure 3B). These results implied that ATG7 and autophagy might play a role in CRC, but regulated by miR-375 in a cell line specific way.

Over-expression of miR-375 suppressed the proliferation of CRC cells 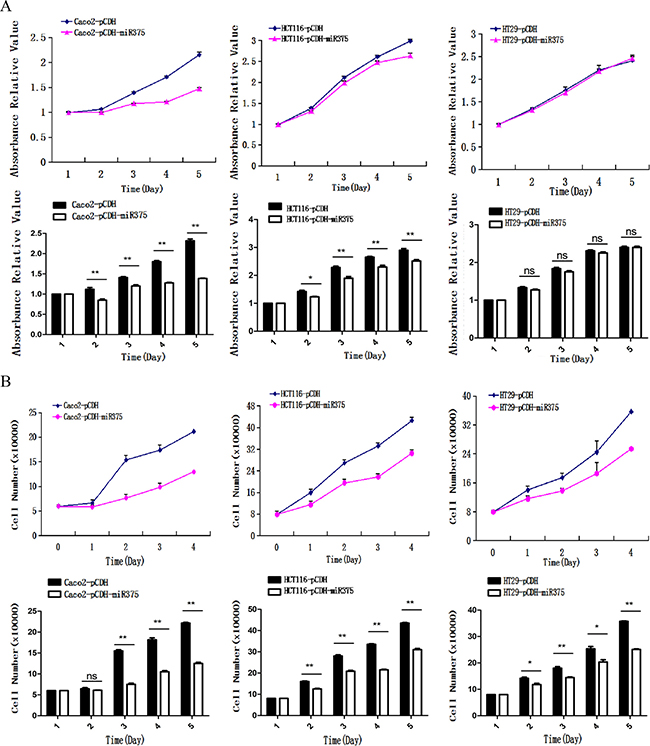 In addition, we used wound healing assay to examine the effect of miR-375 on the migration of CRC cells. Caco2 cells are flat without ability of migration, so we checked HT29 and HCT116 cells only. Results showed no difference between miR-375 group and control group for healing speed (Figure 5). It suggested that miR-375 had no effect on migration in CRC cells.

Nude mice model was employed to identify the in vivo effects of miR-375 on CRC tumorigenesis. CRC bearing nude mice models were generated by subcutaneously inoculated with pCDH-miR375-HCT116 cells act as treatment group, while nude mice subcutaneously inoculated with mock-carrier (pCDH-HCT116) cells act as control group. We observed that 5 control mice appeared to form tumor at day 15 after injection, one died in day 42; while there was no tumor formation in 4 treated mice during 50-day period since injection (Figure 6A, 6B). These results indicated that the over-expression of miR-375 significantly suppressed the proliferation of CRC cells in vivo.

MicroRNAs play a significant role in the diagnosis and prognosis of tumors. Hsa-miR-375 participates in the development of the pancreas through reducing the secretion of insulin in pancreatic beta cells [13, 14]. miR-375 expression suppressed the oncogene AEG-1/MTDH in head and neck squamous cell carcinoma [15], and knockdown of miR-375 increased the phosphorylation of Akt in BMPACs and post MI heart by targeting PDK-1 [16]. Recent evidence suggests an association of decreased miR-375 expression with alimentary system tumourigenesis [17]. Faltejskova [18] reported that the expression of miR-375 was significantly lower in CRC tissues than in normal colorectum tissues. In accordance with that result, our preliminary study finds that miR-375 has lower expression levels in CRC carcinoma tissues than in para-carcinoma tissues. In addition, miR-375 targeted genes (predicted by TargetScan, miRTarBase and miRecords, jak2, map3k8 and atg7) were increased with their downstream genes on the mRNA level in CRC carcinoma tissues. Thus, we hypothesized that miR-375 might suppress CRC by negatively regulating these key genes. To elucidate these signaling pathways and the regulatory mechanisms of miR-375 in CRC, we constructed miR-375 stable expressing CRC cell lines, in agreement with the results in tissues, we found that Jak2, map3k8 and their downstream genes were up-regulated in all 3 cell lines. The down-regulation of atg7 by miR-375 showed a cell line specific manner, the autophagy levels varies in different cell lines.

The network of miRNAs, autophagy and cancer received extensive attention [19, 20]. In our study, miR-375 was significantly lower, atg7 and autophagy (indicated by LC3II/I conversion rate) were activated in CRC carcinoma tissues. This suggests that miR-375 might mediate CRC through targeting autophagy related gene, atg7. However, in our cell lines, atg7 had been silenced by miR-375 only in HCT116 cells, with no effect on the LC3II/I conversion rate. Autophagy had been increased only in miR-375 over-expressing Caco2 cells, whereas its ATG7 had no change. This implied that autophagy is a complicated process influenced by many factors, atg7 is validated as a target gene of miR-375, but its regulation by miR-375 is cell line specific.

In our all 3 CRC cell lines, over-expressed miR-375 had an inhibited effect on both the JAK2/STAT3 and MAPK/ERK signaling pathways, leading to the inhibition of cell proliferation in CRC cells. STAT3 protein (downstream of JAK2) was found to be over-expressed and persistently activated in alimentary canal cancers, such as esophageal, stomach and colorectal cancers [21]. In gastric and liver cancers, miR-375 functions through the JAK2/STAT3 signaling pathway to control cell proliferation and apoptosis [22]. MAP3K8, a member of the Ser/Thr protein kinase family, could activate the MAP kinase and the JNK kinase pathways. The MAP3K8/ERK pathway promotes cell survival in CRC development [23, 24]. Thus, our results suggested that low expression of miR-375 activates JAK2/STAT3 and MAP3K8/ERK pathways in cancer cells, which in turn promotes cell proliferation. Furthermore, the miR-375 over-expression in nude mice significantly inhibited tumor formation without damaging the health of the mice, indicating miR-375 as a potential therapeutic target for CRC. miRNAs can be easily and sensitively detected in peripheral blood [25], which highlights miR-375 as a potential target for the non-invasive measurement for CRC.

In summary, our study observed that miR-375 suppressed the cell proliferation and tumor formation in colorectal cancer by mainly targeting both JAK2/STAT3 and MAPK/ERK signaling pathways. These findings support tumor repressive miR-375 as a potential new approach for colorectal cancer diagnosis and therapy.

All experimental protocols were approved by the Yunnan University Ethnics Committee, and all subjects involved in this study provided informed consent. The Institutional Animal Care and Use Committee at Yunnan University approved animal handling and procedures.

The miRNA prediction was carried out using databases such as miRTarBase, PicTar, TargetScan, miRecord and miRanda.

Packaging and infection of the lentivirus

Lentiviral particles were produced by co-transfection of HEK293 cells. Cells were cultured at the density of ~70% in 10 cm tissue culture dishes. Recombinant pCDH-puro-miR-375 or pCDH-puro empty vector with packaging plasmid PMD2. G were added into each dish to set up teatment and control group respectively, helping with x-treme GENE HP DNA Transfection Reagent (Roche, CH). The virus particles were collected 48 h after transfection, and then infected with HT29, HCT116 and CaCo2 cells respectively, supplemented with 12 μg.mL-1 of infection reagent polybrene. Infected cells expressing green fluorescence were detected by flow cytometry (BD, US) to evaluate the infection efficiency, and selected miR-375 stable expressing cells using puromycin.

The cell proliferation rates were evaluated by 3-(4,5-dimethylthiazol-2-yl)-5-(3-carboxymethoxyphenyl)-2-(4-sulfophenyl)-2H-tetrazolium inner salt. MTS assay was carried out at different time points (0, 24, 48, 72 and 96 h), using the Cell Titer 96 AQueous Assay (promega, USA) according to the manufacturer’s instruction, . pCDH-miR-375 and pCDH-puro control cells were incubated respectively in 96-well plates at the density of 4 × 103 cells/well. 1× phosphate-buffered saline (PBS) was added into the fringe wells to prevent edge effects, followed by incubation for 4 h at 37°C. The absorbance of each well was measured at regular interval under 490 nm (OD490) using a Microplate reader (BioRad, USA), the number of viable cells were calculated and normalized to standards.

The cell migration abilities were evaluated by wound healing method. pCDH-miR375-HCT116 cells and pCDH-miR375-HT29 cells were considered as treatment group, while pCDH-HCT116 cells and pCDH-HT29 cells were considered as control group. Both groups of cells were dispensed into 6-well plates at the density of 6 × 105 cells/well with 2 mL DMEM containing 10% FBS. After 24 h incubation, a straight line of cells in each well were scraped by 200 μL pipette tips, washed 3 times by 1× phosphate-buffered saline (PBS). 2 mL culture medium was immediately added into each well and incubated for 7 days. Images of the wounded area were captured at 0, 48, 72, 120 and 144 h by inverted microscope.

Eight-week-old nude mice with a BALB/c genetic background were randomized into treatment and control groups (5 each), and were injected subcutaneously. Mice inoculated with 2 × 106 of pCDH-miR375-HCT116 cells were considered as treatment group, while nude mice injected with same amount of mock-carrier (pCDH-HCT116) cells were considered as control group. Tumor formation and body weight were recorded for 8 weeks after injection. The volume of tumors was was calculated according to the V = 1/2*l*w*h [28].

All data in the figures are expressed as mean ± SE (standard error of the mean) of n biological replicates. The statistical significance was valued by student t tesing (between 2 groups) or one-way ANOVA (≥ 3 groups) using graphpad prism software.