Results: ISO induced multiple types of arrhythmias in the hypertrophic mice but not in the normal mice. The QTc intervals were prolonged and the amplitudes of T waves were increased significantly by ISO prior to arrhythmia initiation. Inhibition of CaMKII prevented ISO-induced QTc prolongation and T wave elevation and abrogated arrhythmia induction.

Materials and Methods: Pressure-overload cardiac hypertrophy was induced in mice by thoracic aortic banding. Arrhythmias were recorded by electrocardiogram in conscious mice.

Heart failure (HF) is featured with high mortality and morbidity and healthcare expenditures due to the ineffective therapy. Half of HF patients died of sudden cardiac death (SCD), of which ventricular arrhythmias are the most common cause [1]. HF is often a transition from cardiac hypertrophy, a process initiated as compensation to pressure-overload. In the setting of left ventricular hypertrophy (LVH), the incidence of ventricular arrhythmias is significantly increased [2]. Thus, LVH is regarded as an independent risk factor of SCD [3].

Two weeks after TAB, cardiac hypertrophy has been developed in mice and confirmed by echocardiography measurements. The morphometric data from each group was illustrated in Table 1. Compared with sham group, the TAB group, TAB+KN93 group and TAB+KN92 group showed thicker LV anterior and posterior wall, larger LV mass and heart weight to body weight ratio (HW/BW ratio) without changes in the systolic function.

The ECGs at baseline and after ISO injection from each group were recorded and analyzed. The representative ECGs were showed in Figure 1. Ventricular arrhythmias were readily induced by ISO stimulation in TAB group, but not in the sham group. The typical arrhythmias were showed in Figure 2. Before ISO stimulation, the arrhythmia scores for the sham group and TAB group were 0.67 ± 0.52 and 1.67± 0.52, respectively (P > 0.05). After ISO stimulation, the scores were 1.33 ± 0.82 and 6.17 ± 1.50, respectively (P < 0.05). 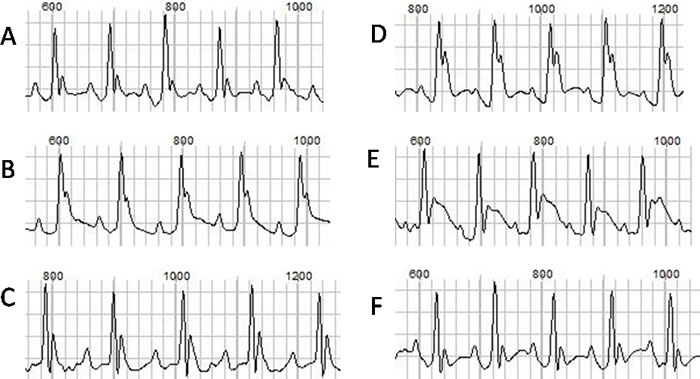 To understand the role of CaMKII activation in the ISO-dependent arrhythmias, we tested the effect of CaMKII inhibition by KN 93. Meanwhile, we used KN92, an inactive analogue of KN93, as a negative control to rule out the off-target effect of KN93. We found that application of KN93 (10 μmol/kg IP, 10 min prior to ISO injection) significantly suppressed ISO-induced ventricular arrhythmias in the hypertrophic mice, while application of KN92 had no effect. Before ISO stimulation, there was no significant difference in the arrhythmia scores among the TAB group, TAB+KN92 group and TAB+KN93 group (1.60 ± 0.52, 1.10±0.99, and 1.20 ± 0.42, respectively; P > 0.05). After ISO stimulation, however, arrhythmia was increased in TAB and TAB+KN92 mice (the scores were 6.00 ±1.50 and 5.10±1.60, respectively) but inhibited in TAB+KN93 mice (the score was 2.90 ± 0.74; P < 0.05 compared with TAB and TAB+KN92 mice). 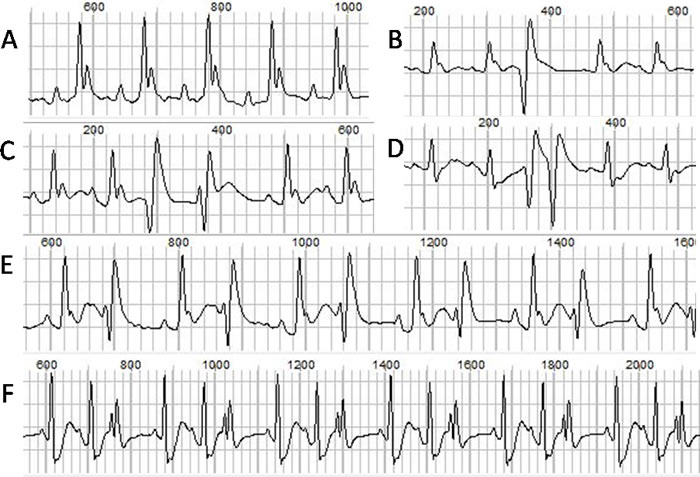 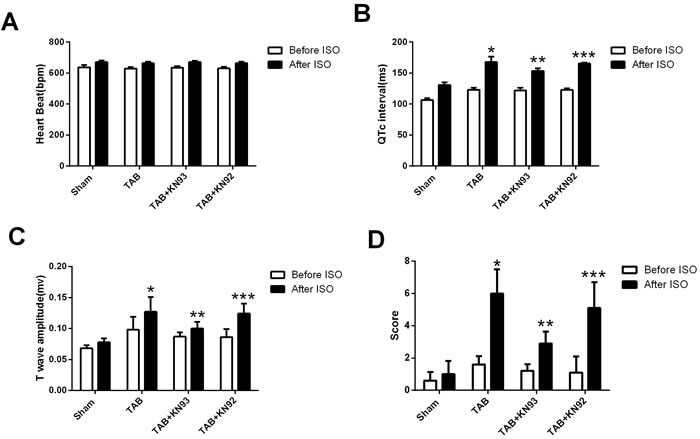 It is known that CaMKII activation induces arrhythmias in structural disease by activation of multiple substrates, including modulation of several ion channels and transporters [15]. Our results here point out a novel mechanism underlying CaMKII mediated ventricular arrhythmias in structural heart disease under sympathetic stress. However, the actual mechanism how CaMKII inhibition reduces ischemic response to adrenergic stimulation in diseased heart remains unclear, and this could be a new direction for further studies.

Mice were housed under standard conditions and all experimental procedures were approved by the local Institutional Committee for Care and Use of Laboratory Animals (IACUC) at Zhongnan Hospital of Wuhan University, Wuhan. Mice were bought from Animal experiment center of Wuhan University. We used thoracic aortic banding (TAB) [16] to establish the pressure-overload cardiac hypertrophy mouse model with preserved heart function according to the protocols approved by the institution’s Animal Care and Use Committee of Wuhan University. In brief, male C57B/L6 mice (6 weeks old) were anesthetized with phenobarbital sodium (60mg/Kg, IP). A 3mm thoracotomy was created at the left second intercostal space. The transverse aortic arch was ligated between the innominate and left common carotid arteries with an overlying 27-Gauge needle using 7-0 Prolene, and the needle was then removed, leaving a discrete region of stenosis. Then the chest was closed, leaving two weeks’ time to develop cardiac hypertrophy. The control group went through sham operation. All animals received humane care.

The mice were trained daily for 7 days with practice handling and echocardiograph (Visualsonics, Vevo 2100, Canada) imaging before data collection in order to minimize the stress-induced artifact. Prior to acquisition of echo images, the chest hair was removed by hair removal cream. The echo transmission gel was pre-warmed, and the operation was gentle to avoid the reflex induced by the transducer pressure on the chest. Mice were imaged in the supine position, and the M-mode images were taken from the short axis at the level of the largest LV diameter. The following parameters were obtained from the M-mode tracings, including LV anterior and posterior wall thickness at diastole and systole (LVAW;d, LVAW;s, LVPW;d, LVPW;s), LV mass, ejection fraction (EF) and fractional shortening (FS).

Awake mice were placed in the ECG recording unit (Emka Technology, France) to record baseline ECG for 30min. The sham group and TAB group were given an intraperitoneal injection (IP) of ISO (3 mg/kg body weight). The ECG was recorded continuously for 1h and analyzed offline. In another set of experiments, mice in the TAB+KN93 group were first injected with CaMKII inhibitor KN93 (10 μmol/kg body weight), while mice in the TAB+KN92 group were first injected with the same dose of KN92 (a KN93 inactive analogue) and followed by a subsequent injection with ISO 10 min later. The conscious ECG was continuously recorded for 1h for arrhythmia analysis.