Independent and joint effects of tea and milk consumption on oral cancer among non-smokers and non-drinkers: a case-control study in China

* These authors have contributed equally to the work

Oral cancer, a major subgroup of head and neck carcinoma, ranks the eighth most frequent cancer worldwide [1]. As reported, the age-standardized incidence rate of oral cancer in China was 2.22 per 100,000 and 0.9 per 100,000 as mortality rate in 2011 [2]. Tobacco smoking and alcohol drinking are considered as the main risk factors [3, 4]. However, there are not all smokers and drinkers developing oral cancer, which suggests that other factors may play potential roles in the etiology of this disease.

Tea is the most consumed beverage in China, especially for the population in Fujian province, and the major types are green tea and black tea. It is well known that tea is characterized by a high content of polyphenols which has been identified to inhabit the tumor growth and migration in animal models or human malignant cells in vitro [5], including the oral cancer [6]. In recent decades, with the development of dietary guidelines, milk consumption has also greatly increased in China. The anti-cancer properties of milk are mostly attributed to its calcium [7] and lactoferrin [8]. Moreover, evidences from laboratory studies also showed that milk could increase the anti-cancer effect of tea due to the interaction between epigallocatechin-3-gallate (EGCG) and lactoferrin [9].

Many epidemiologic studies have separately examined the relationship between tea or milk consumption and risk of oral cancer. Chen et al. [10] indicated that tea drinking reduced the risk of oral cancer, but Hildebrand et al. [11] observed no association. Additionally, there are also controversial conclusions about milk intake and risk of oral cancer [12, 13]. However, to date, few epidemiologic studies reported the interaction between tea and milk drinking on oral cancer. Moreover, the majority of previous studies only adjusted smoking and alcohol drinking rather than limiting the subjects to non-smokers and non-drinkers (NS/ND) [14, 15], which may not completely eliminate the potential confounding effects of them.

The distribution of 421 cases and 1398 controls by main characteristics is presented in Table 1. Cases and controls were similar in the distributions of age, gender and residence (P > 0.05), but significantly differed in education level, marital status, BMI, denture wearing, tea and milk consumption (P < 0.05). The majority of subjects in this study were females, who accounted for 75.06% cases and 71.26% controls, respectively. Compared with oral cancer patients, controls were more likely to have tea consumption, although the proportions of tea drinking were low in both groups (23.68% vs.18.05%). And milk drinking also showed a higher percentage among control subjects.

Table 2 shows the relationship between tea and milk consumption and risk of oral cancer among NS/ND. After adjustment for potential confounders, tea and milk consumption were significantly associated with decreased risk of oral cancer, the adjusted odds ratios (aORs) were 0.73 (95% CI: 0.54-0.97) and 0.69 (95% CI: 0.55-0.88), respectively. When stratified by age, gender, residence and BMI, a stronger protective effect of tea drinking was observed in older age group (>60 years) or urban residents. For milk intake, there were statistically significant reduced risk of oral cancer in men, normal mass index population (BMI) population, urban residents and those age ≤ 60 years.

Table 2: Associations between tea and milk consumption and risk of oral cancer 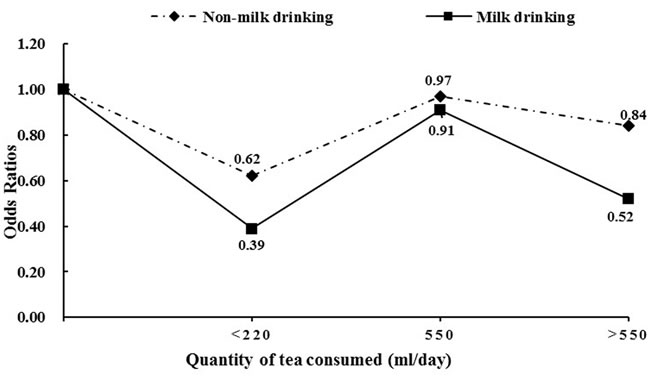 Several previous epidemiological investigations have also demonstrated that tea consumption could reduce the risk of oral cancer [15, 16]. Evidence from laboratorial studies have identified that the anti-oxidant and anti-carcinogenic components of tea are mostly attributed to polyphenols (especially EGCG), with the inhibitory effects on proliferation and invasion of tumor cells [17, 18]. Interestingly, when stratified by select demographic characteristics, the negative correlations between tea drinking and oral cancer risk were more obvious in elders (>60 years) and urban residents, which is similar to a recent study [10]. However, the potential mechanisms suggested to explain these findings remain to be clariﬁed.

Milk is well-known good source of calcium, dietary vitamin D and proteins that provides biological activities from anti-microbial effect [19], immunomodulatory activity [20] to anti-carcinogenic function [21], and thus contributes to human health. Nevertheless, results from epidemiological studies on the association between milk drinking and oral cancer risk are not consistent. A case-control study conducted in Swiss showed an inverse relation between milk intake and oral cancer risk [12], which is consistent with our result. Whereas a significantly increased risk was found by Bravi et al. [13]. The possible reasons for the inconsistencies may be owing to differences in study population and adjustment of covariates.

Adding milk to tea is a common practice in China. In this study, a significantly multiplicative interaction was observed between tea and milk consumption on the risk of oral cancer. A cellular experiment indicated that addition of lactoferrin to tea polyphenols had stronger effect on inhibition of tongue squamous cell proliferation than tea polyphenols alone [9]. Mohan et al. [6] also obtained the similar results in buccal pouch carcinogenesis by animal model. This finding provides a new information that tea drinking with the addition of milk may reach to the greater benefit on the prevention of oral cancer.

In the present work, valid selection of all subjects was based on non-smoking and non-drinking population, helping to eliminate the confounding interferences of tobacco and alcohol. However, it also had several limitations. Firstly, recall bias is unavoidable in retrospective studies, but tea and milk consumption are not recognized to be associated with oral cancer in general, thus this possible bias would be non-differential among cases and controls. Secondly, since all subjects were recruited from only one hospital, selection bias should be concerned. However, the participation rates of cases and controls were high and all eligible subjects were based on strict criteria, which may reduce the possibility of selection bias. Thirdly, the amount constraints of these beverages consumed among NS/ND may weaken the authenticity and reliability of this study to a certain. Therefore, a further study with larger sample size is required to conﬁrm the results of this work.

In conclusion, this hospital-based case-control study is the first to simultaneously assess the relationship of tea consumption and milk drinking with oral cancer risk. Our results suggest that tea and milk consumption are independent protective factors for oral cancer among NS/ND with a synergistic effect between them. The findings may provide a new strategy for oral cancer prevention.

From September 2010 to September 2016, we performed a hospital-based case-control study on oral cancer in Fujian province, China. As described previously [22], participants were recruited from the First Affiliated Hospital of Fujian Medical University and all subjects were NS/ND. Cases were defined as histologically confirmed primary oral carcinomas with no previous history of chemotherapy and radiotherapy. A total of 421 cases (median age 58 years, range: 20-91) were included in the final analysis. Meanwhile, 1398 controls (median age 54 years, range: 20-89) were recruited among inpatients and outpatients without a diagnosis of cancer, and frequency-matched by age (±3 years) and gender with cases. The subjects in control group included (1) healthy population; (2) ear and eye disorders; (3) skin and subcutaneous tissue disorders; (4) trauma; (5) upper-respiratory tract diseases; (6) gastro-intestinal disorders. The proportion of rejection in this study was less than 5%. This study was approved by the Institutional Review Board of Fujian Medical University (Fuzhou, China).

A person who had smoked less than 100 cigarettes and had not drunk as much as once a week in a lifetime was defined as never-smoker and never drinker. Tea consumption refers to drank at least 1 cup per week continuously for at least 6 months. Furthermore, the data on duration of tea-drinking habit (years), quantity of tea consumed (ml/day), concentration of tea (weak/moderate/strong) and types of tea (green tea/oolong tea/others), were obtained. The concentration of tea was evaluated based on the volume occupied by the brewed tea leaves in the cup (weak, the volume less than 25% of the cup; moderate, 25%-50%; and strong, >50%).

Chi-square test was used to compare the distribution of demographic characteristics as well as tea and milk consumption between case and control groups. The associations of tea and milk drinking with oral cancer were estimated by odds ratios (ORs) and the corresponding 95% confidence intervals (CIs) derived from unconditional logistic regression model, and subgroup analysis was conducted by age group, gender, residence and BMI. Furthermore, we assessed the relationships between tea-related variables and oral cancer stratified by milk consumption. Multiplicative interaction between tea and milk consumption on oral cancer risk was also evaluated by unconditional logistic regression model. Additive interaction was assessed using the relative excess risk due to interaction (RERI), attributable proportion (AP), and synergy index (SI). The null values of RERI and AP were 0, while that of SI was 1. P values <0.05 (two-tailed) were considered significant. All analyses were conducted using R software version 3.1.1.

This study was funded by the Natural Science Foundation of Fujian Province (No. 2015J01304), Joint Funds for the Innovation of Science and Technology of Fujian province (No.2016Y9033).

18. Babich H, Krupka ME, Nissim HA and Zuckerbraun HL. Differential in vitro cytotoxicity of (-)-epicatechin gallate (ECG) to cancer and normal cells from the human oral cavity. Toxicol In Vitro. 2005; 19:231-242.