Understanding of the pathophysiology of cholestasis associated carcinogenesis could challenge the development of new personalized therapeutic approaches and thus improve prognosis. Simultaneous damage might aggravate hepatic injury, induce chronic liver disease and even promote carcinogenesis. We aimed to study the effect of Hepatitis B virus surface protein (HBsAg) on cholestatic liver disease and associated carcinogenesis in a mouse model combining both impairments. Hybrids of Abcb4-/- and HBsAg transgenic mice were bred on fibrosis susceptible background BALB/c. Liver injury, serum bile acid concentration, hepatic fibrosis, and carcinogenesis were enhanced by the combination of simultaneous damage in line with activation of c-Jun N-terminal kinase (JNK), proto-oncogene c-Jun, and Signal transducer and activator of transcription 3 (STAT3). Activation of Protein Kinase RNA-like Endoplasmic Reticulum Kinase (PERK) and Eukaryotic translation initiation factor 2A (eIF2α) indicated unfolded protein response (UPR) in HBsAg-expressing mice and even in Abcb4-/- without HBsAg-expression. CONCLUSION: Cholestasis-induced STAT3- and JNK-pathways may predispose HBsAg-associated tumorigenesis. Since STAT3- and JNK-activation are well characterized critical regulators for tumor promotion, the potentiation of their activation in hybrids suggests an additive mechanism enhancing tumor incidence.

Various phenotypes of chronic liver disease like progressive familial intrahepatic cholestasis (PFIC type 3) or biliary liver cirrhosis have been attributed to mutations of the human ABCB4 gene [1]. The ABCB4 gene encodes the P-glycoprotein ABCB4, a member of the ATP-binding cassette (ABC) transporters, which is responsible for phospholipid transport across the canalicular membrane. ABCB4 harbors numerous missense mutations which probably reflect the spectrum of liver disease depending on ABCB4 background [2]. The lack of Abcb4 transporters in mice causes a complete absence of micelle forming phospholipids from bile, which results in liver injury from chronic cholangitis [3]. Abcb4 knockout mice (Abcb4-/-) represent a highly reproducible, well characterized non-surgical mouse model for cholangiopathy [3].

Additionally, it has been suggested that the accumulation of a misfolded protein in the liver can sensitize to other injuries [19]. The aim of this study was to characterize aggravation of cholestatic liver disease and carcinogenesis by HBsAg expression in Abcb4-/--mice. We hypothesized that hepatic expression of HBsAg in mice lacking the phospholipid flippase multidrug resistance protein 2 (Abcb4-/-) represents a suitable model to analyze simultaneous damage by direct cytopathic effects of HBsAg and chronic biliary liver disease. In this study, we established a murine HBsAg+/-/Abcb4-/-- model and characterized mechanisms leading to enhanced liver injury and carcinogenesis. 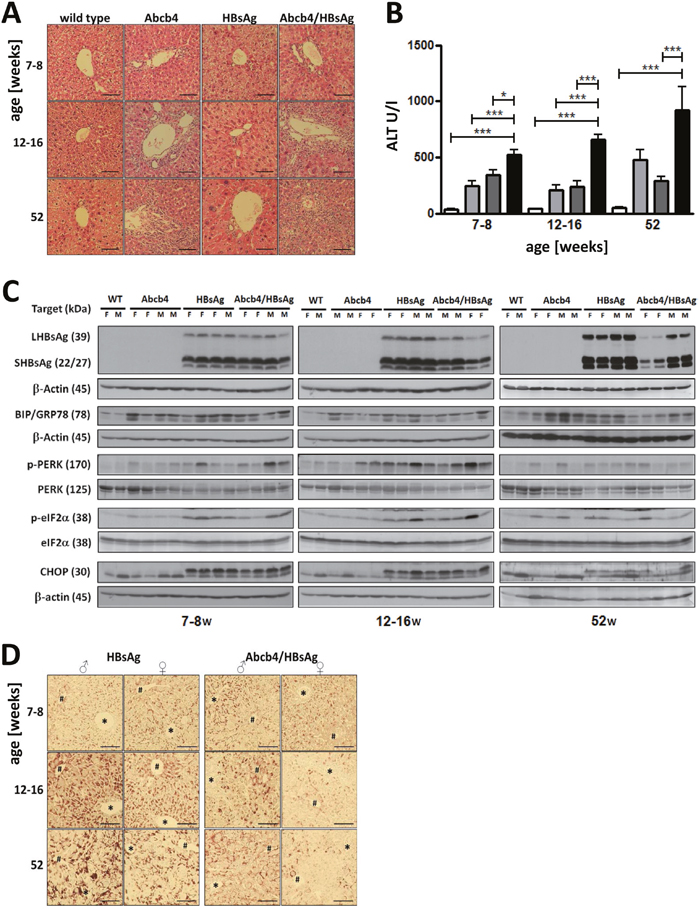 Reduced HBsAg expression in Abcb4-/-/HBsAg+/- mice did not influence UPR

Serum concentrations of 11 analyzed Taurine conjugates were combined to illustrate the global increase in serum bile acid concentrations in Abcb4-/-/HBsAg+/- (Figure 2A). Bile acid concentrations were also enhanced in HBsAg transgenic mice in comparison to wild type controls aged 52 weeks (#p=0.001). Unconjugated bile acids and glycine conjugates were detected at negligible levels and thus were excluded from further analysis. Interestingly, relative serum levels of TUDCA, a protective bile acid, were significantly reduced in Abcb4-/-/HBsAg+/- mice (Figure 2B). Serum ALT and bile acid concentrations correlated well, even in HBsAg+/- controls (Figure 2C and 2D). Figure 2E and 2F demonstrate the absolute- and relative composition of the 8 most abundant bile acids in serum. Complete data of all bile acids are presented in Supplementary Table 1. 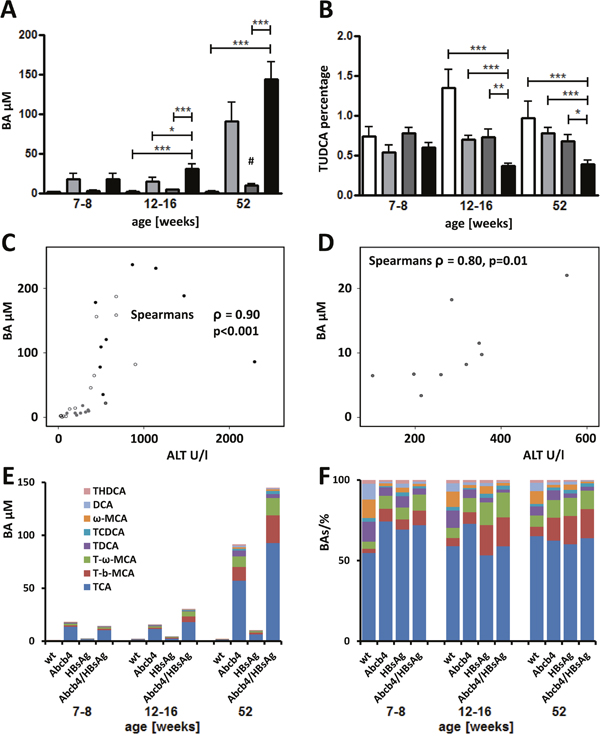 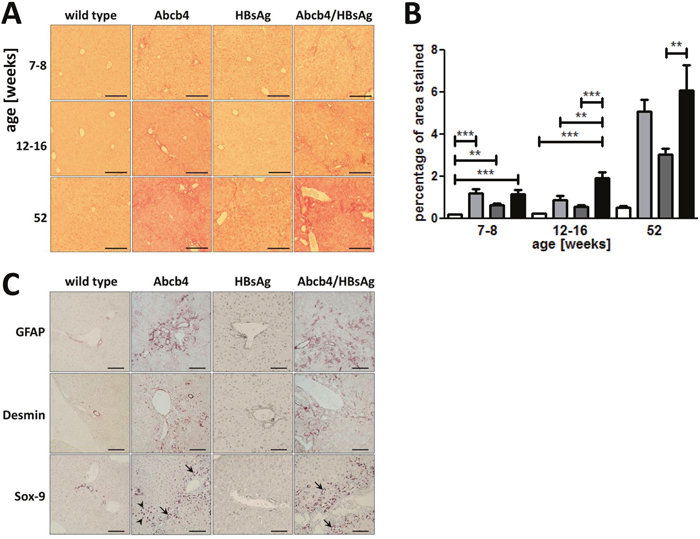 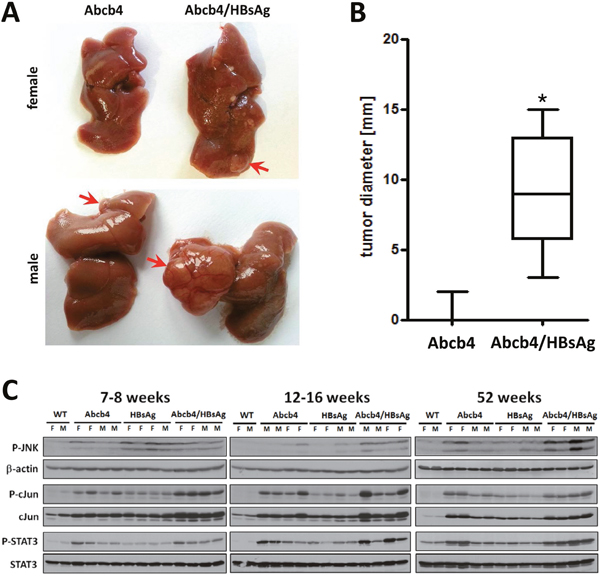 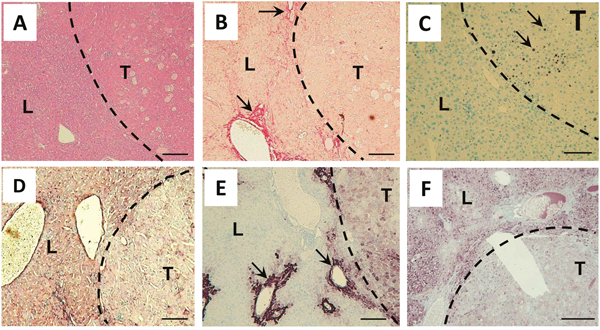 In the present study two well characterized murine models of liver injury have been combined in order to elucidate the interplay of cholestasis and HBsAg induced tumorigenesis [11, 18, 22, 23]. The extent of liver damage, cholestasis, and fibrosis was enhanced in Abcb4-/-/HBsAg+/- mice. Activation of proto-oncogene c-Jun, transcription factor STAT3, and tumorigenesis were even potentiated by simultaneous damage. This is the first time that a ‘second hit’ mouse model for genetically determined cholestasis and HBsAg-induced liver damage generating carcinogenesis has been described.

Remarkably, the current study demonstrates aggravation of liver disease by intracellular HBsAg accumulation without viral infection in case of simultaneous labefaction. Primary biliary fibrosis and biliary atresia with additional HBV infection has been described in clinical studies [24, 25]. In addition, biliary diseases might even be attributed or caused by HBV infection [26, 27]. Especially, patients with immunosuppression and chronic HBV infection are at high risk of developing fibrosing cholestatic hepatitis, an aggressive and mostly fatal form of viral hepatitis [14]. Our data strengthen the idea that intracellular HBsAg accumulation might contribute to the aggravation of HBV associated cholestasis.

In 1998, a so called ‘two hit’ theory proposed steatosis as first hit sensitizing liver tissue to a variety of second hits like oxidative stress leading to necroinflammation and fibrosis [28]. With regard to our current results, HBsAg induced storage disease might be considered as a ‘second-hit’ providing the potential to enforce carcinogenesis in simultaneous chronic liver damage. This hypothesis is strengthened by the fact that patients with high HBV surface antigen levels develop HCC dose dependently [16, 17].

Increased ALT activity in Abcb4-/-/HBsAg+/- mice nearly reflects the sum of individual ALT levels in corresponding transgenic/knock out controls and thus suggests an additive effect of both liver diseases. Liver cell damage, caused by a lack of Abcb4-transporters is primarily localized to the periportal area due to regurgitation of bile acids from leaky bile ducts whereas in HBsAg+/- mice liver cell damage is homogenously distributed throughout the whole lobules. From the histopathological point of view cumulation of these damages might be possible. These findings correlate with enhanced cholangitis/pericholangitis and bile duct proliferation. Interestingly, serum bile salt concentrations correlate with serum ALT. It has been shown recently that serum bile acid concentrations >10 μM caused hepatocellular damage reflected by enhanced ALT levels [29]. Furthermore, BAs may behave as cancer promoters through indirect mechanisms involving oxidative stress and DNA damage, as well as they can act as selection agents for apoptosis-resistant cells [30]. On the other hand, tauroursodeoxycholic acid (TUDCA) protects hepatocytes from bile acid-induced apoptosis via activation of survival pathways [31]. Another study demonstrated that unconjugated UDCA provides protection against the cytotoxicity due to toxic BAs, the stimulation of hepatobiliary secretion, antioxidant activity, due in part to an enhancement in glutathione levels, and the inhibition of liver cell apoptosis [30]. It has been demonstrated that bile acids can induce endoplasmic reticulum stress, which in turn stimulates apoptosis, in a hydrophobicity dependent manner [32]. On the other hand it has been suggested that ER-stress can alter bile acid metabolism [33]. The absolute amount of TUDCA is unchanged but the relative amount of TUDCA decreased by the total increase of BAs (Supplementary Table 1). Nevertheless, the absolute increase of BAs might be a cumulative effect of enhanced BA-concentrations in both models (Figure 2) and of ER-stress-altered BA-metabolism [33]. According to these observations, reduced TUDCA levels in Abcb4-/-/HBsAg+/- mice presumably contributed to deleterious effects of enhanced serum bile acid concentrations. The current data suggest that the combination of the underlying biliary components of individual damage might critically influence the exacerbation of pathologic effects in Abcb4-/-/HBsAg+/- mice.

Interestingly, reduced HBsAg transgene expression barely had any effect on UPR and UPR induced apoptosis in Abcb4-/-/HBsAg+/- mice (compared to HBsAg controls). Reduced HBsAg accumulation and unchanged UPR induction is different to our previous observations, where loss of HBsAg expression by DNA methylation ameliorated cell stress and liver integrity in HBsAg+/- mice [37]. Animals with reduced HBsAg expression due to DNA methylation were excluded from the experiment in the current study. Furthermore, ER stress and UPR might play a role in Abcb4-/- mice, although CHOP and thereby ER stress dependent apoptosis were not induced (Figure 1C). Indeed, it has been described before that intrahepatic cholestasis due to accumulation of bile acids in the liver was associated with ER stress [38]. However, the cellular pathways that regulate the hepatic UPR and ER stress in cholestasis remain undefined [39]. The unfolded protein response (UPR) is generally activated in solid tumors and results in tumor cell anti-apoptosis and drug resistance [40]. On the other hand, it has been demonstrated that induction of ER-stress is essential for hepatocarcinogenesis [41]. A mouse model describing bile duct ligation combined with alpha-1 antitrypsin mutation PiZZ causing an ER storage disease has been published previously [42]. The authors concluded, that patients with α1-AT deficiency might be more susceptible to the development of severe liver disease when suffering from concomitant cholestatic liver injury and vice versa [42]. Our study confirms the conclusion that ER storage disease exacerbates cholestasis.

A limiting factor of our study might be a slight change of tumor incidence in the murine Abcb4-/- model during the last years. In a formerly published study we described 100% incidence of hepatic tumors in Abcb4-/- mice aged 52 weeks [43]. Hygienic housing conditions and analysis for the presence of mouse pathogens as well as subsequent therapy have been improved several times ever since in the animal facility. Influences of antibiotics regarding liver fibrosis and alterations of gut microbiota to hepatic fibrogenesis are well known [44, 45]. Thus reduction in HCC incidence over the years in Abcb4-/- mice are most likely caused by improvements of hygienic status [44, 45].

In summary we conclude that hepatic injury, caused by cholestasis and HBsAg induced storage disease, reflects a model of simultaneous liver damage with enhanced carcinogenesis. Our data suggest that concurrent biliary liver disease provides a ‘second-hit’ which enforces HBsAg-associated carcinogenesis by the potentiated activation of proto-oncogene cJun and STAT3.

The present study was performed with permission of the State of Hesse, Regierungspraesidium Giessen, according to Section 8 of the German Law for the Protection of Animals and conforms to the NIH Guide for the Care and Use of Laboratory Animals. Transgenic mice were maintained at the Central Animal Laboratory of the Justus-Liebig-University Giessen under specified pathogen-free conditions. All experiments were approved by the Committee on the ethics of Animal Experiments of the Regierungspraesidium Giessen, Giessen, Germany (permit number: V54-19c 2015c GI20/10 Nr. A36/2011, Nr. A5/2012 and Nr. 52_2011).

Mice were sacrificed at ages of 7-8 (young), 12-16 (middle), and 52 weeks (old) (n=4-5 per age and sex). Livers were collected and underwent morphological diagnosis. Remaining samples were preserved for analyses as indicated. Serum samples were stored at −80°C until analysis of alanine aminotransferases (ALT), as well as alkaline phosphatase (AP) by routine clinical chemistry on a Reflotron Plus Analyzer (Roche, Mannheim, Germany).

Histology and immunohistochemistry were performed as described before [46]. Quantification of collagenous tissue was performed by assessment of stained area using ImageJ-software [11].

Bile acids in serum were analyzed by UHPLC-MS/MS essentially as described before [49].

This work was supported by grants from the Deutsche Forschungsgemeinschaft (RO 958-1 to ER as well as KFO 217 to DH and EM), the von-Behring-Roentgen Foundation (#58-0005 to ER and #60-0002 to MR) and the University Medical Center Giessen and Marburg (#21-2013 to ER and #7-2014 to MR). The funders had no role in study design, data collection and interpretation, or the decision to submit the work for publication.