Long non-coding RNA-CRNDE: a novel regulator of tumor growth and angiogenesis in hepatoblastoma

Hepatoblastoma is one of the most common liver tumors in children, accounting for more than 65% of childhood liver malignancies [1, 2]. Hepatoblastoma is different from adult liver cancers. It is not associated with hepatitis virus infection, cirrhosis, or other underlying liver pathology [1, 3]. The survival rate of hepatoblastoma is very high if hepatoblastoma was completely resected. However, the prognosis of unresectable metastatic cases is still very poor [4, 5]. Thus, it is required to understand the mechanism of hepatoblastomagenesis and develop effective diagnostic biomarkers as well as novel therapeutic targets for the patients with hepatoblastoma.

Angiogenesis is a common feature in nearly all tumors and associated with tumor grade and malignancy [6, 7]. Angiogenesis provides enough blood supply to meet the requirement of rapid tumor growth. Angiogenesis helps tumor cells to spread with the blood stream to distant organs [8]. Angiogenesis also plays a crucial role in the development and metastasis of hepatoblastoma [9]. However, the mechanism orchestrating vascularization is still unclear in hepatoblastoma.

Long non-coding RNAs (lncRNAs) are non-coding transcripts more than 200 nucleotides in length. They are ubiquitously expressed in mammalian genomes, and participate in biological processes, such as chromatin remodeling, transcription regulation, epigenetic regulation, and mRNA processing [10, 11]. LncRNAs are dysregulated in a wide range of human cancers, such as prostate cancer, gastric cancer, breast cancer, and hepatocellular carcinoma (HCC) [12–15]. We have performed genome-wide lncRNA analysis to identify hepatoblastoma-related lncRNAs. LncRNA-CRNDE is shown to be differentially expressed between hepatoblastoma and normal liver tissue [16]. However, the role and mechanism of CRNDE in tumor growth and angiogenesis in hepatoblastoma is still unclear. In this study, we elucidate the biological and clinical significance of CRNDE up-regulation in hepatoblastoma. We show that CRNDE knockdown inhibits tumor angiogenesis and tumor growth via activating mammalian target of rapamycin (mTOR) signaling. 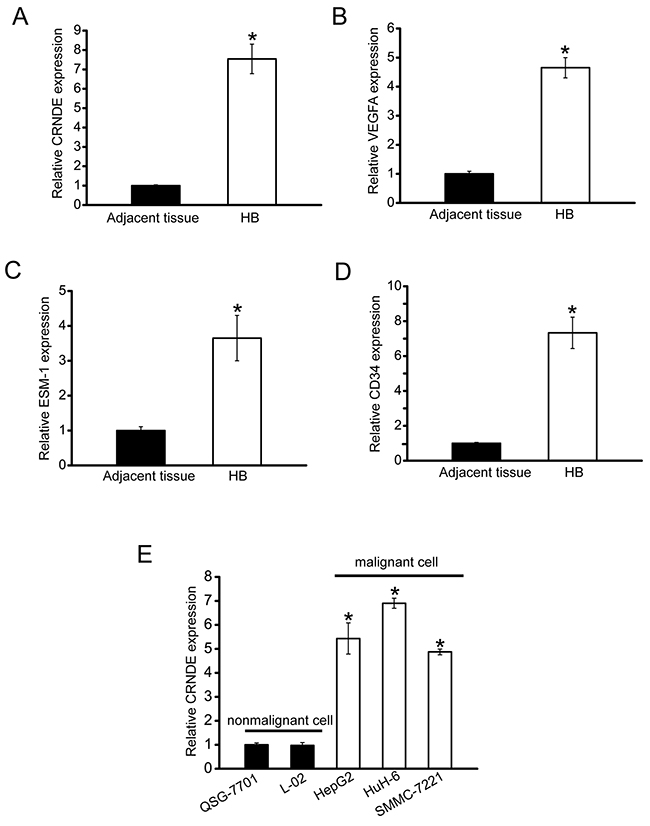 To explore the function significance of CRNDE induction, we employed hepatoblastoma xenograft mouse model to determine the effect of CRNDE knockdown on tumor growth and angiogenesis. CRNDE knockdown HuH-6 cells or scrambled shRNA-transfected HuH-6 cells were subcutaneously injected into the left flank of nude mice (C57BL/6). CRNDE expression was obviously decreased in CRNDE knockdown group (Figure 2A). Moreover, the tumor volume in CRNDE knockdown group was significantly smaller than that in scrambled shRNA-transfected group after 2-week hepatoblastoma inoculation (Figure 2B), which was consistent with tumor weight reduction (Figure 2C). 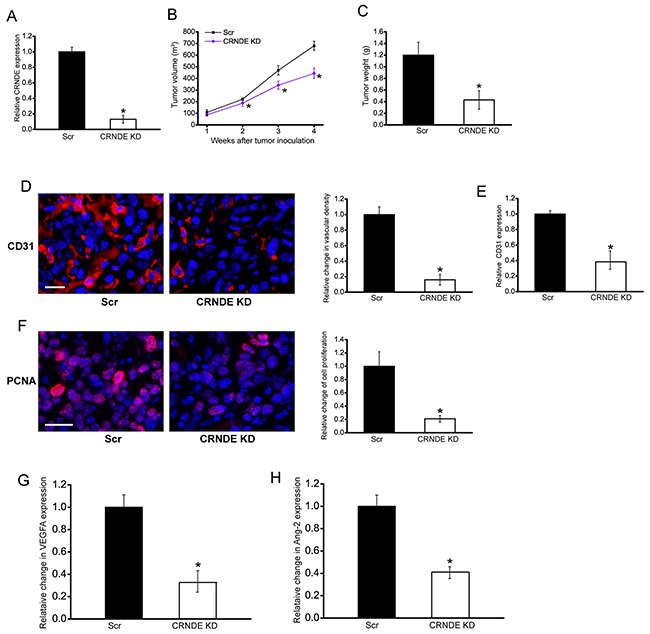 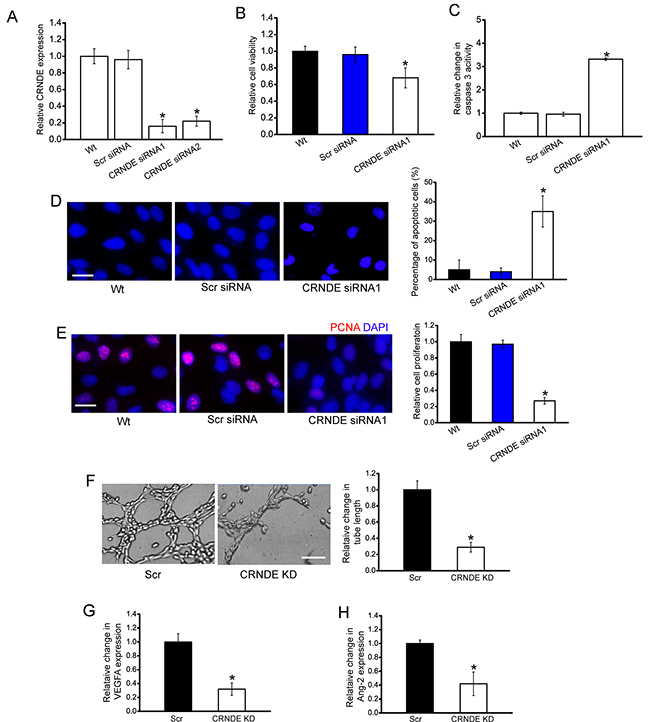 The angiogenic effect of CRNDE was also estimated. HuH-6 cells were transfected with CRNDE siRNA and scrambled siRNA. The conditional medium was collected, and then incubated with HUVECs. A dramatically suppressive effect of tube formation was observed in HUVEC cells treated with CRNDE knockdown condition medium (Figure 3F). ELISA assays indicated that the secretion of VEGFA and Ang-2 was reduced by CRNDE knockdown in HuH-6 cells (Figure 3G and 3H).

CRNDE regulates the development of hepatoblastoma through mTOR signaling

During cancer cell metastasis, mTOR signaling pathway plays a critical role in cancer cell metastasis, and is aberrantly regulated [17, 18]. We then determined whether mTOR signaling is activated in hepatoblastoma cells. Phosphorylated mTOR and P70S6K (a serine/threonine kinase that is directly downstream of mTOR) expression was much higher in hepatoblastoma cells (HuH-6) than that in nonmalignant QSG-7701 and L02 cells, indicating that mTOR signaling was activated in hepatoblastoma cells (Figure 4A). Moreover, phosphorylated mTOR and P70S6K level was significantly higher in hepatoblastoma tissues compared with the matched normal tissues (Figure 4B). Once mTOR signaling was significantly blocked with rapamycin, a specific inhibitor targeting mTOR, the rate of HuH-6 cell proliferation was decreased (Figure 4C). The expressions of cell proliferation-related genes, such as c-myc and cyclin D1, were obviously down-regulated in HuH-6 cells treated with rapamycin, while tumor suppressor genes, like p53 and PTEN, were obviously up-regulated (Figure 4D). 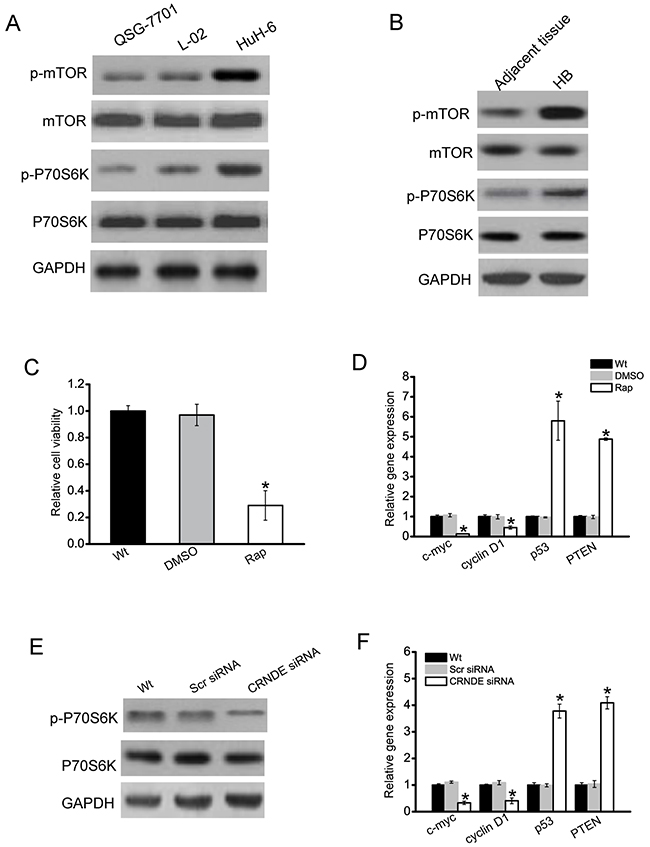 We then investigated whether CRNDE-mTOR signaling regulatory network is involved in regulating HuH-6 cell function and angiogenic effect. CCK-8 assay and PCNA staining showed that cell viability and proliferation was significantly decreased in CRNDE knockdown cells, similar to rapamycin-treated cells. Rapamycin treatment could inhibit CRNDE overexpression-induced up-regulation of cell proliferation and cell viability (Figure 5A and 5B). 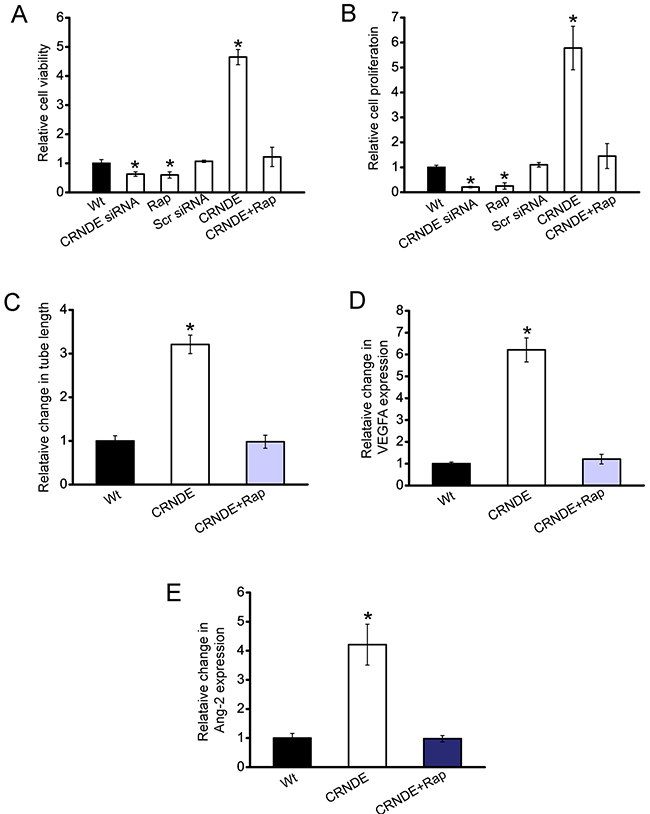 CRNDE was then overexpressed in HuH-6 cells, and treated with or without rapamycin. The conditional medium was then collected, and incubated with HUVECs. CRNDE-overexpressed medium significantly increased the tube formation ability, whereas rapamycin treatment exerted suppressive effect on tube formation of HUVECs (Figure 5C). Moreover, ELISA assays revealed that the secretion of VEGFA and Ang-2 was significantly increased upon CRNDE overexpression, which was reduced by rapamycin treatment (Figure 5D and 5E). Collectively, these results reveal a direct correlation between CRNDE expression and mTOR signaling activation.

Hepatoblastoma is an uncommon liver malignancy in infants and children. Inhibition of tumor growth and angiogenesis contributes to the development of efficient treatment [16, 19]. In this study, we show that CRNDE knockdown inhibits tumor growth and tumor angiogenesis in vivo, and reduces hepatoblastoma cell viability and angiogenic effect in vitro. CRNDE up-regulation contributes to unusual hypervascularity of hepatoblastoma.

Mounting evidence has shown that modification of lncRNA expression is tightly associated with tumor formation. We have identified 2736 differentially expressed lncRNAs between hepatoblastoma and normal liver tissue [16]. We also show that TUG1 is a promising therapeutic target for aggressive, recurrent, or metastatic hepatoblastoma [9]. Here we put the spotlight on the function of CRNDE, a lncRNA up-regulated in hepatoblastoma. We show that that CRNDE is involved in hepatoblastoma through regulating tumor growth and tumor angiogenesis.

CRNDE is the gene symbol for Colorectal Neoplasia Differentially Expressed (non-protein-coding), a long non-coding RNA. CRNDE plays important role in development. CRNDE expression appears highest at the early stage of human development and progressively decreases thereafter. It is involved in regulating multipotency, differentiation, and gametogenesis. CRNDE expression is significantly up-regulated in a number of neoplastic diseases, such as colorectal cancer and glioma [20, 21]. CRNDE is identified as an oncogene for its function in promoting cell growth and migration. Increased CRNDE expression during neoplasia may be a response to perturbations in upstream signaling pathways, for example the MAP kinase pathway. CRNDE acts through epigenetic mechanisms to regulate cell function, which may relate to its deregulation in cancer, such as histone acetylation or methylation [22–24]. We speculated that CRNDE is also shown as an oncogene in hepatoblastoma. CRNDE is up-regulated during the development of hepatoblastoma. Its knockdown inhibits tumor growth angiogenesis in vivo and reduces hepatoblastoma cell viability in vitro. CRNDE up-regulation contributes to the development of hepatoblastoma.

Human hepatoblastoma and adjacent non-tumor liver tissues were collected from the patients undergoing resection of hepatoblastoma in Children hospital, Fudan University, China. Informed consent was obtained from every patient. This study was also approved by the Institute Research Ethics Committee. Tumor cell lines, HepG2, HuH-6, and SMMC-7221, and nonmalignant QSG-7701 and L01 hepatocytes were cultured in Dulbecco’s Modified Eagle’s medium supplemented with 10% fetal bovine serum (FBS) in a humidified incubator with 5% CO2 at 37°C.

CRNDE small interfering RNA (siRNA) was purchased from Qiagen (Hilden, Germany). The target sequence was 5′-GTGCTCGAGTGGTTTAAAT-3′ and 5′-GTCTGCAATTCATAATGGA-3′. The negative control siRNA was also purchased from Qiagen. The cells were incubated with either CRNDE siRNA or negative control siRNA using LipoMax Transfection reagent according to the protocol.

HUVECs were seeded into a 96-well culture plate pre-coated with Matrigel (BD Biosciences) with or without the medium containing 5% FBS and 1% penicillin/streptomycin or CM of HuH-6 cells. After 24-h incubation, tube formation was observed using a phase contrast microscopy, and quantified by calculating tube length.

Cell lysates were subjected to sodium dodecyl sulfate-polyacrylamide gel electrophoresis (SDS-PAGE), transferred to the nitrocellulose membrane, immunoblotted with the primary antibody, and then immunoblotted with the secondary antibody at room temperature. Protein signaling was visualized by the enhanced chemiluminescence kit (Pierce). GAPDH was detected as a loading control.

Tumor cells (1 × 105) were transfected with the required RNA oligonucleotides in a 6-well plate. The medium was removed 36 h after transfection. Cells were washed with phosphate-buffered saline (PBS), and then cultured for additional 12 h. The TCM was collected, centrifuged at 500 × g to remove these detached cells, and then centrifuged at 12, 000 × g to discard cell debris. TCM was then stored in aliquots at -80°C [9].

Cell viability was detected using the CCK-8 kit (Dojindo Laboratories, Kumamoto, Japan) according to the manufacturer’s instruction [12]. Cells were cultured in a 96-well plate at a concentration of 1 × 104 cells/ml. OD450 was detected after 3-h incubation with CCK-8.

After the required treatment, cells were fixed with ice-cold methanol for 10 min. Cells were washed with PBS for three times. Non-specific binding sites were blocked with 5% BSA for 30 min. These cells were incubated with the primary antibody (PCNA, 1:100, Abcam) overnight at 4°C, and then incubated with the secondary antibody conjugated with Alexa Fluor 594 (Invitrogen) for 3 h at room temperature, followed by incubation with 4′,6-Diamidino-2-phenylindole dihydrochloride (DAPI, Sigma) for 5 min.

Tissue slices were fixed in 4% paraformaldehyde in phosphate-buffered saline and embedded in paraffin. Immunohistochemistry was performed in paraffin sections (3 μm thick). The slices were incubated with the primary antibody (CD31, 1:100, BD Biosciences) overnight at 4°C, and then incubated with the secondary antibody conjugated with Alexa Fluor 594 (Invitrogen) for 3 h at room temperature, followed by incubation with DAPI for 10 min.

VEGFA and Ang-2 ELISA kit (R&D Systems) was used to determine the activity of VEGFA and Ang-2 in cell culture supernatants and tissue lysates according to the manufacturer’s recommendation. VEGFA, ESM-1, and CD34 levels in hepatoblastoma specimens and adjacent non-cancerous liver tissues were detected by ELISA assays. Briefly, the hepatoblastoma specimens and adjacent non-cancerous tissues were lysed using RIPA buffer and centrifuged. The collected supernatants were thawed and centrifuged to remove the particulate. The assay was performed according to the manufacturer’s instructions. The optical density of each sample was determined using a microplate reader set to 450 nm with wavelength correction set to 570 nm. Data were expressed as mean concentration (pg/mL).

Male C57BL/6 nude mice (6-weeks-old) were maintained in special pathogen-free (SPF) condition. The animal experiments were carried out according to the recommendations in the Guide for the Care and Use of Laboratory Animals of the National Institutes of Health. Mice were injected subcutaneously into the left flank with 1×107 HuH-6 cells that have stable expression of scrambled shRNA or CRNDE shRNA, as 100-μL cell suspensions with an equal volume of Matrigel (BD Bioscience). Tumors were measured twice a week with a caliper, and tumor volumes (V) were calculated using the following formula, V= (L × W2) × 0.5. After 4-week tumor inoculation, mice were sacrificed and tumors were extracted [9].

All data were expressed as means±S.E.M. unless indicated otherwise. Comparisons between groups were analyzed using Student’s t test or Mann-Whitney U-test. P<0.05 was considered to be statistically significant. All results were reproduced in at least three independent experiments.