Lung cancer is one of the most common cancers worldwide and has the first leading cancer-related mortality with much poorer survival [1]. Non-small cell lung cancer (NSCLC) constitutes approximately 80% of total lung malignancies. Despite significant advances in multidisciplinary treatment modes, the 5-year survival rate of lung cancer is less than 15% [2, 3]. So far, only a few prognostic factors, such as sex, performance status, disease stage, and weight loss, have been identified [4]. Currently, using clinical parameters alone, we cannot accurately predict the clinical outcome of lung cancer patients. The discovery of molecular biological prognostic factors may aid in a more accurate prediction of clinical outcome of patients with NSCLC.

Chemerin is a novel adipokine, which plays an important role in adipogenesis and chemotaxis of the innate immune system [5]. Previous studies have indicated that chemerin expressions are downregulated in many carcinomas and are associated with poor differentiation [6–9]. However, other studies demonstrate that the expressions of chemerin are upregulated in grade III/IV glioma tissues and overexpression of chemerin in orals quamous cell carcinoma is correlated with poor clinical outcomes of patients [10, 11]. Recent research has shown that the levels of plasma chemerin in patients with lung cancer were significantly higher than those in healthy control [12]. However, the prognostic significance of chemerin expression in blood specimens from NSCLC patients has not yet been determined.

In this study, we investigated the correlation between serum chemerin levels and clinicopathological characteristics and survival. Our results showed that the evaluation of serum chemerin could be a valuable diagnostic and prognostic biomarker for NSCLC.

The mean age of the NSCLC patients (61.8 years) was not obviously different from healthy controls (62.6 years). The proportion of male gender accounted for 65.6% of the NSCLC patients and 57.5% of the healthy controls, respectively, with no significantly difference. At the time of diagnosis, 79 patients were at stage I + II and 110 patients were at stage III + IV, 53.4% of the patients with lymph node metastases, and 31.7% with distant metastases. Patient’s data were analyzed after a 5-year follow-up, and the median OS was 30 months, and median DFS was 21 months. The patient’ s characteristics are presented in Table 1. 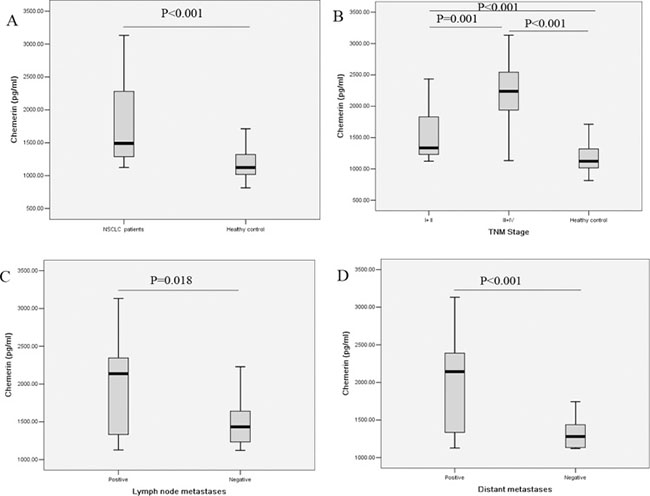 To assess the performance of serum chemerin as a marker, ROC curves were used to calculate the sensitivity of this marker in separating NSCLC patients from healthy controls. As shown in Figure 2A, an area under the curve (AUC) value for serum chemerin reached 0.809 (confidence interval (95% CI) 0.722–0.896). With a cut-off value of 1500 pg/ml, serum chemerin has a sensitivity of 62.4%, a specificity of 67.5%. These results indicated that serum chemerin was a valuable biomarker for NSCLC diagnosis.

Table 3: Univariate and multivariate Cox analysis of variables considered for PFS and OS of NSCLC patients

Adipokines are multifunctional peptide hormones that perform essential regulatory functions related to energy balance, satiety, and immunity [13, 14]. Many studies have demonstrated that adipokines play important roles in tumor angiogenesis, invasion, differentiation, and progression [15–17]. Chemerin, a member of adipokines, plays an important role in regulating angiogenesis, cell proliferation and migration, inflammation, glucose, insulin signaling, and lipid metabolism [18–20]. Although the dysregulated expression of chemerin in the tumor tissues has been reported, the results are inconsistent [6–11, 21]. One possible explanation for these inconsistencies is that chemerin expression may vary in different types of cancers, which are common phenomena in tumor biology [22].

One hundred and eighty-nine NSCLC patients diagnosed and treated in the Nanjing Chest Hospital, from January 2010 to January 2014 were enrolled in this study. Patients who suffered hyperlipidemia, metabolic syndrome, infection, cardiovascular disease, liver disease, previous malignancy, or received adjuvant therapy before surgery were excluded from the study. All patients’ histopathological classification was determined according to the WHO criteria, and staged classification was defined according to the 7th edition of UICC TNM staging system [23]. One hundred and twenty healthy controls were recruited from healthy unrelated subjects whose age and gender matched subjects who did not have any family history cancer were recruited in this study.

The study protocol was approved by the ethics committee of Nanjing Chest Hospital. All patients provided written informed consent before enrollment.

Serum samples from each individual were obtained at the time of diagnosis, before any therapeutic measures were started. Samples were centrifuged at 1500 × g for 20 min at −4°C. The supernatant was stored at −70°C for assessment of the levels of chemerin. The chemerin levels were determined by sandwich ELISA with the commercial chemerin ELISA kit (Mil-lipore, USA). The CEA levels were measured by electrochemiluminescence immunoassays. The normal upper limit for this assay was 5 ng/ml. All samples were blinded to the technologists running the assays, and the code was broken to the statisticians after the database was constructed.

Statistical software (SPSS for Windows, version 18) was used for the analysis. All variables under normal distribution were shown as the mean ± standard deviation. The differences between groups were determined by Mann-Whitney U test, and Pearson chi-square test or Fisher’s exact test was tested for categorical values. To determine the diagnostic accuracy of chemerin, receiver operating characteristic (ROC) curves was retrieved from logistic regression analysis and the area under the curve (AUC) was calculated. Univariate survival analysis was performed using the Kaplan-Meier method and the log-rank test. Multivariate analysis was conducted to determine an independent impact on survival using the Cox proportional hazard method. P < 0.05 was considered statistically significant.

5. Rourke JL, Dranse HJ, Sinal CJ. Towards an integrative approach to under-standing the role of chemerin in human health and disease. Obes Rev. 2013; 14:245–62.