Association between body mass index and endometriosis risk: a meta-analysis

Background: Epidemiological studies have sought to establish a relationship between a woman’s current body mass index and endometriosis, but with varying results. This meta-analysis was to summarize the current epidemiological evidence.

Methods: Pertinent studies were identified by searching PubMed and Web of Science through November 2016. Study-specific risk estimates were combined using fixed or random effects models depending on whether significant heterogeneity was detected.

Results: A total of 11 studies (two cohort studies and nine case-control studies) was included in the meta-analysis. The pooled relative risk of endometriosis was 0.67 (95% CI: 0.53, 0.84) for each 5 kg/m2 increase in current body mass index, with statistical significant heterogeneity across the studies (P <0.001, I2 =86.9%). Compared with normal weight women, the pooled relative risk for obese women was 0.89 (95% CI: 0.83, 0.96), which was lower than that for overweight women (relative risk =0.97; 95% CI: 0.91, 1.05). The combined estimate was robust across subgroup and sensitivity analyses and no observed publication bias was detected.

Conclusion: This study suggested that higher body mass index may be associated with lower risk of endometriosis. Further work will need to focus on elucidating underlying biologic mechanism that contribute to the initiation of endometriosis.

Endometriosis is a common gynecological inflam-matory disease with a prevalence of 6~10% in the general female population [1]. It can cause pelvic inflammation, adhesions, infertility and chronic pain [1]. It is estimated that annual costs of endometriosis have exceed $49 billion in the United States [2]. Despite its significant impact on the health-care system, the risk factors of endometriosis remain poorly elucidated.

A number of biologic risk factors, such as a taller height or lesser weight, have been reported to be associated with risk of endometriosis [1, 3-8]. However, most remain inconclusive as risk factors of endometriosis. During the past decades, epidemiological studies [3-7, 9-13] have sought to establish a relationship between a woman’s current body mass index (BMI) and endometriosis, but with varying results. Some studies [5, 9-13] indicated an inverse association between endometriosis and BMI, but others [3, 4, 6] did not observe such relation. Herein, we conducted a meta-analysis to quantitatively assess this association.

A total of 3403 records were identified after the search of the databases. After the title and abstract screening, 3380 records which did not meet the pre-specified inclusion criteria were excluded. After the full-text screening, 12 articles [14-25] did not meet the inclusion criteria, of which nine [14-22] did not have useful estimate, two [23, 24] used childhood/early adult BMI as the exposure of interest, and one [25] was an updated study. Moreover, we identified one additional publication were after manually searching the reference lists of selected studies [8]. Finally, a total of 11 publications [3-13] were included in present meta-analysis(Figure 1). 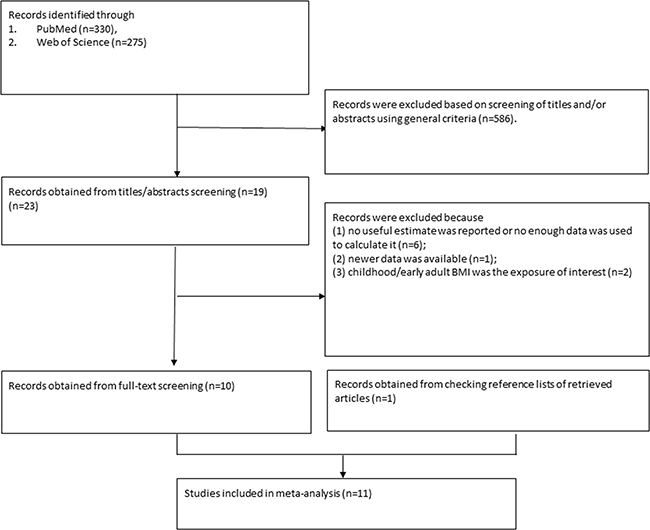 Figure 1: References searched and selection of studies in the meta-analysis.

Table 1: Characteristics of studies included in the meta-analysis, 2003 to 2016 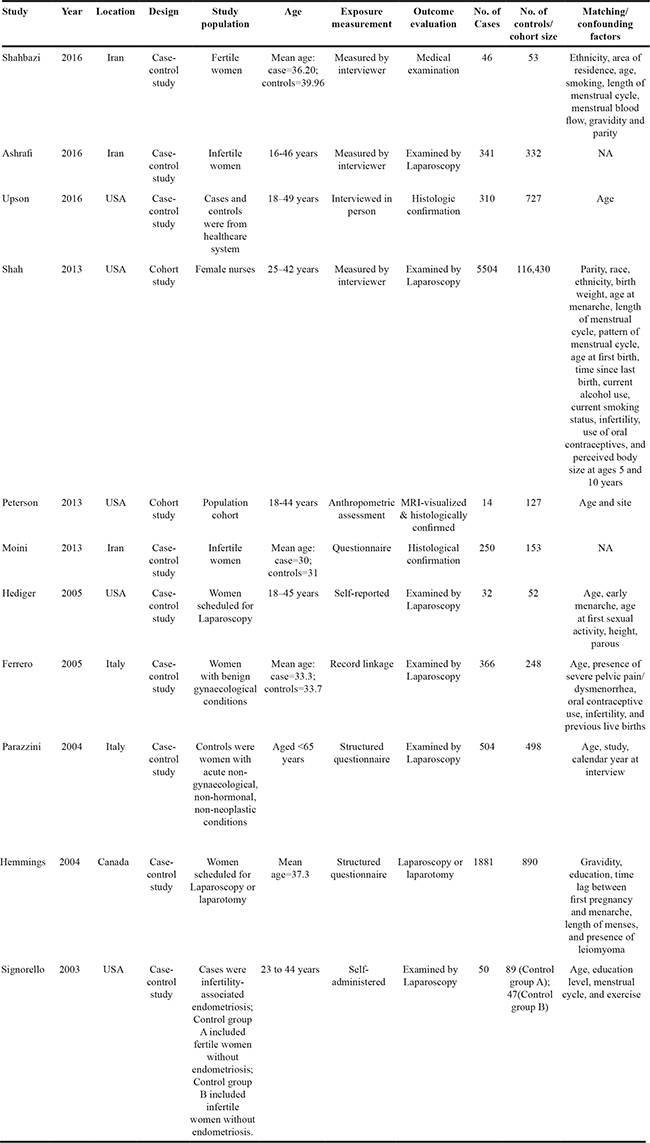 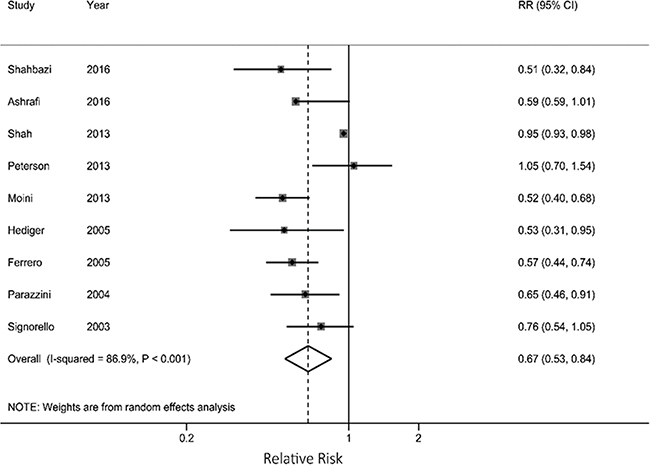 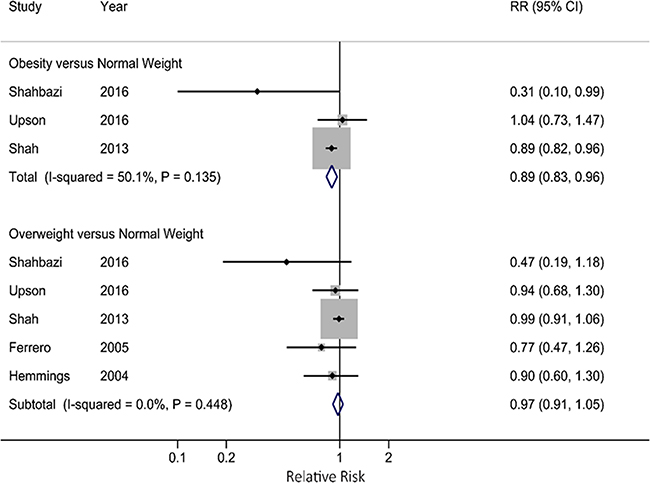 Figure 3: Forest plot for associations of obesity and overweight with endometriosis risk.

Table 2: Summary estimates and corresponding 95% confidence intervals for association of endometriosis risk with each 5 kg/m2 increase in body mass index

1P value for heterogeneity within each subgroup.

2P value for heterogeneity between subgroups in meta-regression analysis.

To our knowledge, this is the first meta-analysis to assess the relationship between a woman’s current BMI and endometriosis risk. Here, we observed a significant inverse association, which suggested a possible reduced risk of endometriosis for women with higher BMI. The combined estimate was robust across sensitivity analyses.

Several important issues should be taken into further considerations in this study. First, regarding the utilization of BMI, most genetic and molecular effects upon body weight are likely to become obscured. It is argued that clinical categories of the BMI may not provide enough etiological information to reflect the nature of obesity. Other new concept such as “adiposopathy” which was defined as adipose tissue dysfunction will have to be included in any future studies using BMI to associate to endometriosis. Second, it has been suggested that the inverse relationship between obesity and endometriosis is due to diagnostic bias. Obese women with pelvic pain may be less likely to be suggested with an operative intervention, which may subsequently lower the possibility of a laparoscopic diagnosis of endometriosis.

Some limitations should also be taken into considerations. First, residual confounding inherent in the original studies may distort the association between BMI and endometriosis. However, major potential confounders, such as smoking, parity, age at menarche and length of menstrual cycle, were adjusted in most of the original studies. Second, misclassification of BMI may occur, especially for studies with a self-reported height and weight. However, subgroup analysis stratified by exposure measurement method showed similar results between studies with height and weight measured by interviewers and by self-reported. Third, there is a significant heterogeneity across the studies. The observed heterogeneity may originate from various sources, such as different study designs and different study populations. Fourth, although publication bias was not observed in present meta-analysis, the statistical power for publication bias test was lower when the number of studies was limited.

In conclusion, this study suggested that higher BMI may be associated with lower risk of endometriosis. Large cohort studies are needed to confirm this inverse association. Further studies are also need to unveil the underlying biologic mechanism concerning the development of endometriosis.

We followed standard criteria for conducting and reporting of meta-analyses of observational studies [26]. We performed a computerized literature search through November 2016 using the following key words in PubMed and Web of Knowledge: (“body mass index” OR “obesity” OR “overweight” OR “underweight” OR “weight” OR “anthropometric” OR “body size” OR “body figure”) AND (“endometriosis”). The identified publications were reviewed independently for their relevance to the research topic by two authors. We also manually searched the reference lists of relevant publications to identify additional studies. A set of pre-specified inclusion criteria was applied during the review, and discrepancies were resolved by consensus. To be included in the meta-analysis, studies had to: 1) report current BMI as the exposure of interest, 2) report endometriosis as the outcome of interest, 3) use a cohort, case-cohort or case-control design, 4) provide estimates of relative risk (RR), hazard ratio, or odds ratio with confidence intervals (CIs) or standard errors or the data necessary to calculate these.

Because endometriosis is a rare outcome in general female population, the odds ratio in a case-control study is approximate equal to a rate ratio, hazard ratio or relative risk in a cohort study. Thus, we used the relative risk to measure the association between BMI and endometriosis risk. If multiple estimates were provided, priority was given to the multivariable-adjusted risk estimates that were adjusted for the most potential confounding factors in original studies. If more than one study was conducted in the same population, the most recent report was selected for our analysis.

We used a standardized reporting form to abstract the following data from each publication: the first author’s name, the year of publication, the country in which the study was conducted, the age of the study population, the size of the cohort or number of controls, the number of cases, the assessment method of current BMI, the categories of BMI, the ascertainment of the endometriosis and the RRs and 95% CIs for endometriosis risk associated with those categories, and the potential confounders which were adjusted in multivariable models.

To assess study quality, a 9-point system on the basis of the Newcastle-Ottawa Scale [27] was used in which a study was judged on 3 broad categories for case-control studies and cohort studies as follows: the selection of study groups, comparability of groups, and ascertainment of either the exposure or outcome of interest. The high-quality study was defined as one with ≥7 points which is a median value of all the included studies.

Based on the World Health Organization classification, BMI was categorized into underweight (<18.5 kg/m2), normal weight (18.5–24.9 kg/m2), overweight (25–29.9 kg/m2) and obese (≥30 kg/m2). To examine the association between BMI and endometriosis risk, we pooled the study-specific RR for each 5 kg/m2 increase in current BMI. For the studies in which only categorical results were reported, we used the method proposed by Greenland and Longnecker [28] and Orsini et al. [29] to calculate the trend in RR per 5 kg/m2 increase in current BMI. We also calculated the pooled RRs of endometriosis for obese or overweight women compared with normal weight women. We used a fixed effect model to pool the study specific estimates unless significant heterogeneity was observed, then the random effect model proposed by DerSimonian and Laird was used [30].

For further assessing the association of BMI with endometriosis risk, we conducted analyses stratified by study design, study location, exposure assessment method, number of cases, and study quality. We also conducted subgroup analyses stratified by whether the studies adjusted for potentially important confounders or important risk factors, including smoking status, length of menstrual cycle, parity, oral contraceptive use, and age at menarche. In addition, we performed a sensitivity analysis of the influence of individual studies on the summary estimate by repeating the meta-analysis excluding one study at a time.

Heterogeneity among studies was assessed with the Q and I2 statistics, and results were defined as heterogeneous for a P value < 0.10 or an I2 > 50% [31]. Publication bias were evaluated by visual inspection of funnel plot and formal testing by using Begg’s tests [32].