Monoclonal antibodies against the epidermal growth factor receptor (EGFR) have expanded the spectrum of therapeutic options; they have also improved the clinical outcome of patients with metastatic colorectal cancer [1–6]. The deregulation of the signaling pathways downstream of EGFR, including the RAS/RAF/MEK/ERK pathway, may induce resistance to anti-EGFR therapy. Regarding this resistance, a mutation in KRAS codon 61 or 146 has been actively studied as a possible additional predictive biomarker for anti-EGFR therapy [6, 7]. In addition, several studies have suggested that mutations in certain genes (i.e., NRAS and BRAF) account for this resistance [3–6, 8–16] because they are downstream effectors of the EGFR signaling pathway, similar to the KRAS gene. Therefore, there is a need to identify additional biomarkers to more accurate selection of patients for anti-EGFR therapy.

MicroRNAs have been increasingly recognized as useful biomarkers of various human cancers [17–22]. Regarding microRNA in the signaling pathway downstream of EGFR, we recently suggested that microRNA-31 (miR-31)-5p regulates BRAF activation in colorectal cancer [23, 24] and that high miR-31-5p is associated with survival in patients with colorectal cancer who underwent surgical treatment and chemotherapy with anti-EGFR antibodies [19].

Percentage (%) indicates the proportion of cases with a specific clinicopathological or molecular feature within a given dichotomous category of EZH2 expression by immunohistochemistry. P values were calculated by analysis of variance for age and by a chi-square test or Fisher’s exact test for all other variables.

During the follow-up study of the 109 patients with colorectal cancer treated with anti-EGFR therapeutics who were eligible for survival analysis, 64 patients died (all deaths were confirmed to be attributed to colorectal cancer). The median follow-up periods for Progression-free survival (PFS) and overall survival (OS) were 6.1 and 46 months, respectively. 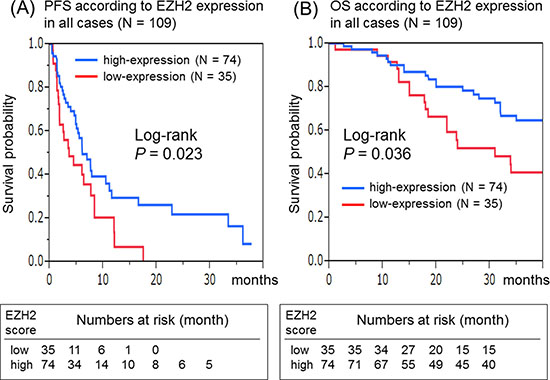 We further analyzed the association of EZH2 expression with the efficacy of anti-EGFR therapy in patients with colorectal cancer with no mutations in KRAS (codon 61/146), NRAS (codon 12/13/61), or BRAF (codon 600). In the KRAS (codon 61/146), NRAS, and BRAF wild-type groups, a significantly shorter PFS (log-rank test: P = 0.039, P = 0.021, and P = 0.036, respectively) was observed in the EZH2 low-expression groups (scores of 0–1) than in the high-expression groups (scores of 2–3) in Kaplan–Meier analysis (Figure 2). We also examined the PFS for the group with at least one mutation in KRAS, NRAS, or BRAF and the no-mutation group. As a result, in the no-mutation group, our data indicated a tendency for a significant difference between the EZH2 high- and low-expression groups in Kaplan–Meier analysis (P = 0.057). 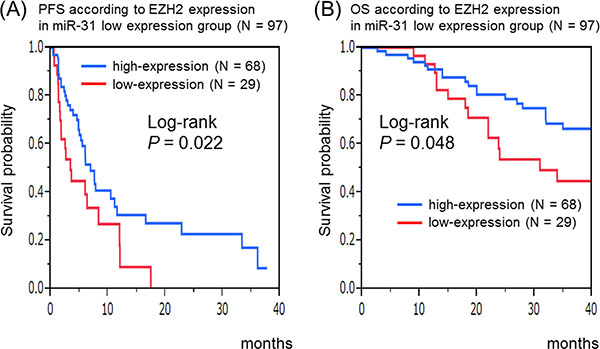 There are some limitations to our study. These include the cross-sectional and observational design and the relatively small sample size for prognostic analysis. In addition, all patients underwent resection of the primary lesion of colorectal cancer before chemotherapy. These limitations may have affected the prognostic analysis; OS of patients with colorectal cancer was relatively longer than that obtained in large clinical trials. In contrast, our current study showed that there was a significantly better PFS in colorectal cancers possessing all wild-type copies of KRAS, NRAS, and BRAF than in colorectal cancers with at least one mutation of KRAS, NRAS, and BRAF, although no significant differences in OS were observed between them (data not shown). These findings are almost consistent with those of previous studies [3, 5, 13, 16, 34] and support the validity of our pyrosequencing assay for examining the gene mutations in the pathway downstream of EGFR. Future large and independent studies are necessary for confirming the correlation between low EZH2 expression and unfavorable prognosis in patients with metastatic colorectal cancer who have received anti-EGFR therapy.

We collected formalin-fixed paraffin-embedded (FFPE) tissues of 109 primary tumors of colorectal cancers of patients who underwent surgical treatment and chemotherapy with anti-EGFR antibodies at Sapporo Medical University Hospital or Keiyukai Sapporo Hospital between 1997 and 2014. All patients underwent surgical resection of primary tumor of colorectal cancer before receiving anti-EGFR therapy. To clarify the association between EZH2 expression and survival in patients with metastatic colorectal cancer, we limited the patients who received 5-FU-based adjuvant chemotherapy before receiving anti-EGFR therapy. The primary cancer tissues of all patients were confirmed to be both histologically EGFR-positive and without mutations in KRAS codons 12 and 13.

PFS was defined as the time from the beginning of anti-EGFR therapy to progression or death by any cause. Patients who did not meet these criteria were censored at the date of last administration. OS was defined as the time from the diagnosis of colorectal cancer to death by any cause or last follow-up. The patients were followed until death or December 2014, whichever came first. Informed consent was obtained from all patients before specimen collection. This study was approved by the institutional review boards of the participating institutions.

JMP (version 10) software was used for statistical analysis (SAS Institute, Cary, NC, USA). All P values were 2-sided. Univariate analysis was performed to assess clinicopathological and molecular characteristics according to the EZH2 expression level; the chi-square test or Fisher’s exact test was used for categorical data, whereas analysis of variance was used to compare the mean patient age.

In survival analysis, the Kaplan–Meier method and log-rank test were used to assess survival time distribution. Cox proportional hazards regression models were used to compute mortality hazard ratio according to the EZH2 expression status. The multivariate Cox model included the variable of EZH2 expression stratified by tumor location (proximal colon vs. distal colon and rectum), the mutations of BRAF (codon 600), KRAS (codon 61/146), and NRAS (codon 12/13/61) (present vs. absent), and miR-31 (high-expression vs. low-expression). A backward elimination was performed with a threshold of P = 0.10, to avoid overfitting.

We thank the pathology departments of Sapporo Medical University Hospital and Keiyukai Sapporo Hospital for providing the tissue specimens.