Letters to the Editor:

The selection and expansion of tumor cells with de novo genetic alterations in specific genes has been described as a mechanism of resistance to targeted therapy. Unfortunately, in the metastatic setting it is often not possible to examine the multiple lesions present in an individual to determine the presence and mechanism of acquired resistance during therapy. Circulating tumor DNA (ctDNA) can be used to analyze the genomic characteristics of tumors in a non-invasive manner [1]. We have previously reported that tumor-specific chromosomal changes can be detected in plasma from patients through integrated whole-genome analyses of cell-free DNA [1]. We have now applied whole-genome sequencing to analyze plasma ctDNA from a patient with chemotherapy-refractory colorectal cancer that had become resistant to EGFR-blockade with cetuximab. A total of 630 Gb of sequence data were obtained, corresponding to 145x sequence coverage of cell-free genomic DNA, and analyzed to identify sequence and structural alterations. These and other analyses revealed emergence of a Q61H mutation in KRAS as well as focal high-level (>9 fold) amplification and rearrangement of the MET locus that were not detected in pre-treatment tumor samples (Figure 1). Alterations in these genes have been reported in tumors with secondary resistance to EGFR-directed therapy and are consistent with clinical progression [2-5]. In addition to its role in resistance to targeted therapy, MET amplification has been shown to confer sensitivity to the tyrosine kinase inhibitor crizotiniband other inhibitors [6, 7], and may provide a new therapeutic target in patients with resistance to EGFR blockade. These results describe the first whole-genome analysis of ctDNA to identify genetic alterations associated with mechanisms of resistance to a targeted therapy. Our analyses suggest that genome-wide analyses of ctDNA can be used for discovery of tumor-specific alterations in the in the context of disease monitoring, detection of molecular resistance, and identification of new therapeutic targets. 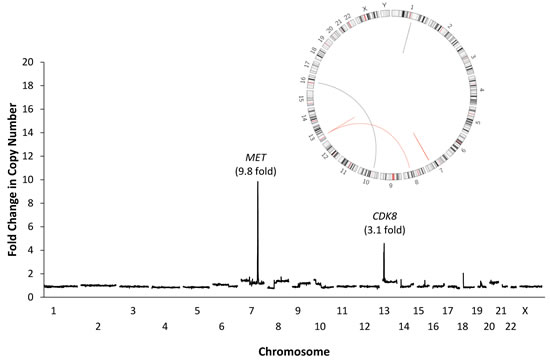 This work was supported by NIH grants CA121113, FasterCures Research Acceleration Award, The European Community’s Seventh Framework Programme, the American Association for Cancer Research Stand Up To Cancer–Dream Team Translational Cancer Research Grant, and Swim Across America. L.A.D. and V.E.V. are co-founders of Personal Genome Diagnostics and are members of its Scientific Advisory Board and Board of Directors. L.A.D., and V.E.V. own Personal Genome Diagnostics stock, which is subject to certain restrictions under University policy. The terms of these arrangements are managed by the Johns Hopkins University in accordance with its conflict-of-interest policies.