Although the incidence of gastric cancer has significantly decreased worldwide, it is still the second most common malignancy in China [1]. Thus, identification of its risk factors for prognosis remains greatly important to clinicians. A variety of factors have been adequately analyzed in order to evaluate their predictive value of prognosis for gastric cancer, including tumor diameter [2], T stage [3], N stage [4], tumor markers [5, 6] and other novel indexes [7–9].

Till now, the most commonly used classification is TNM staging system including T stage, N stage and distant metastasis, which was recommended by American Joint Committee on Cancer (AJCC) [10] and Japanese Gastric Cancer Association (JGCA) [11]. However, the tumor diameter, as an important prognostic factor which was demonstrated in many other tumors [12–15] as well as gastric cancer [16], has not been included in the TNM staging system yet. Thus, in present study, we defined a new index—tumor volume (V) by the formula V = Tumor diameter × (T stage)2/2, and investigated the prognostic value of tumor volume and VNM for gastric cancer.

Table 1: Clinicopathological characteristics of patients in training and validation set

Tumor diameter*: Tumor diameter was divided into 4 subgroups according to the 3 optimal cutoff points calculated by X-tile software (Supplementary Figure 1). 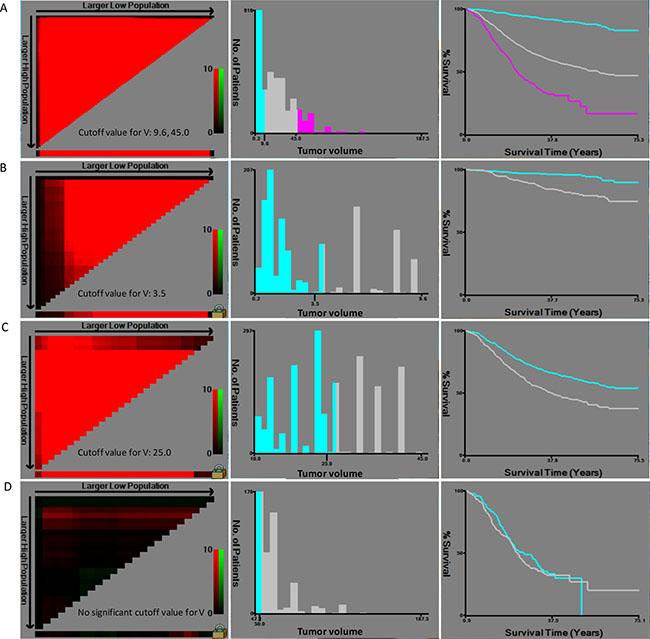 Comparison of predictive value of V and VNM stage 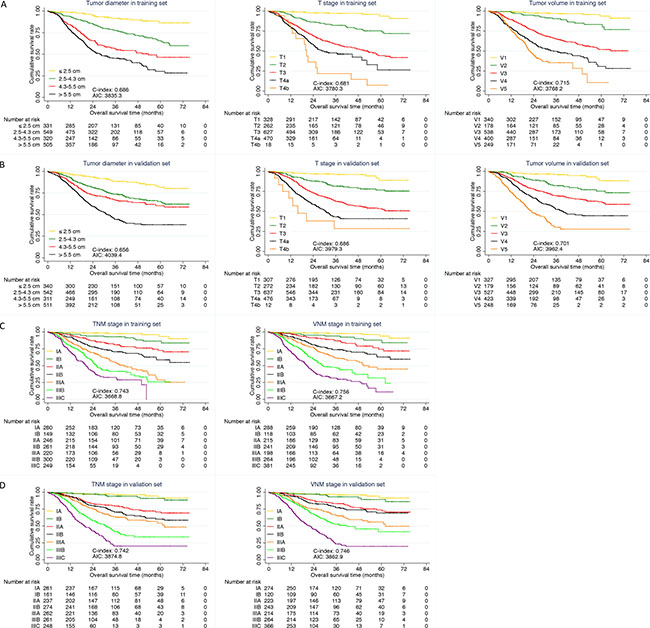 In validation set, the predictive accuracy and prognostic discriminatory ability of V stage and VNM stage were still better than that of tumor diameter, T stage (Table 3, Figure 2B) and TNM stage (Figure 2D) respectively.

Two nomograms were developed for predicting overall survival in training set (Figure 3A and 3C). The VNM model showed significant advantages than TNM model in predictive accuracy and prognostic discriminatory ability (C-index: 0.775 vs 0.767; AIC: 3635.6 vs 3648.7, P < 0.001) (Table 4). The calibration curves of the two models both showed good agreement between predicted and actual outcomes (Figure 3B and 3D). 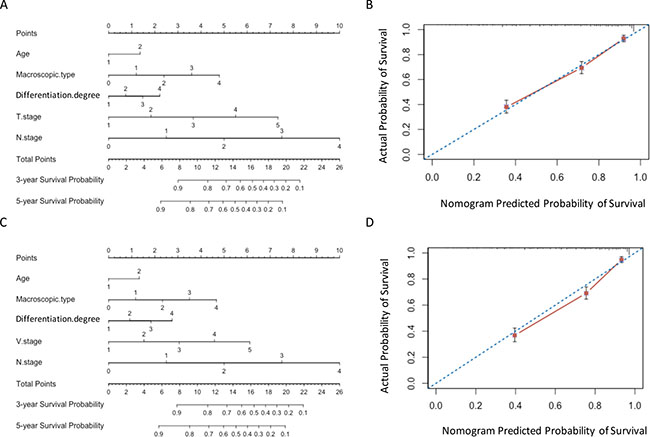 The results in validation set were consistent with those in training set. The predictive accuracy and prognostic discriminatory ability of VNM model were significant better than those of TNM model (Table 5). The predicted survival of the two models showed good agreement with observed survival (Figure 4). 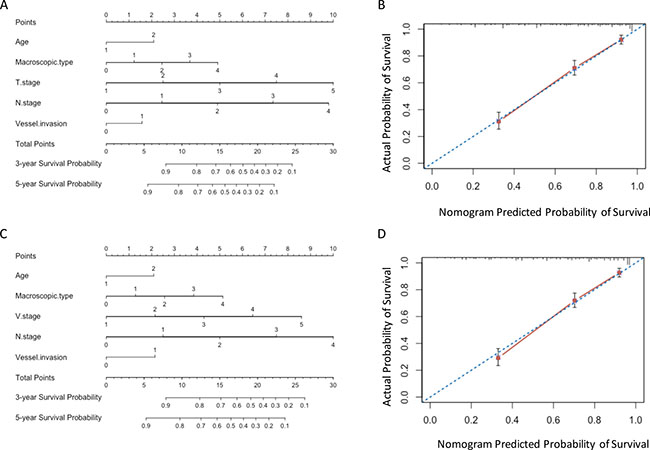 In order to evaluate the superiority of the current volume calculating formula, we further validated the formula reported in the previous study using our center’s data (Table 6). The results showed that the V stage, VNM stage and the multivariable model calculated by current formula had a larger C-index and a smaller AIC value than those calculated by the previous formula (all P < 0.001).

Table 6: Comparison and validation between the two formulas

However, tumor diameter or T stage alone could not accurately reflect the actual tumor burden of gastric cancer due to this cancer’s complicated morphology and inconsistent pattern of invasion [2, 17, 27, 28]. Thus, a new index which could better reflect the actual size of this tumor is needed.

Tumor volume, which could accurately reflect the tumor burden, may possess significant prognostic value for gastric cancer. Moreover, tumor volume was reported as an independent prognostic factor in several cancers, such as non-small-cell lung carcinoma [30], nasopharyngeal carcinoma [31] and malignant melanoma [32]. However, study assessing the predictive value of tumor volume for gastric cancer is lacking. Up to date, there is only one study reported by Jiang et al [33] that calculated tumor volume via the formula V = pT × (tumor size/2)2 demonstrated tumor volume maybe more reliable than T stage in predicting prognosis of gastric cancer in a cohort of 497 patients. Further, they conducted a VNM staging system by replacing the T stage with tumor volume and found that it was more appropriate than the current TNM staging system in predicting prognosis of gastric cancer patients.

In current study, we calculated the tumor volume based on the formula V = Tumor diameter × T stage2/2. The mathematic model of tumor volume referred to the formula V = length × width2/2 in the tumor bearing mouse model [34]. We used tumor diameter instead of the length and replaced the width with T stage. We first used the C-index and AIC value to evaluate the predictive accuracy and prognostic discriminatory ability for tumor volume, respectively. The predictive value of V stage was higher than tumor diameter and T stage. However, accurate prediction of prognosis is more determined by the staging system than a variable alone [12]. We then conducted the VNM stage on the basis of the two most powerful prognostic predictors—V stage and N stage. The predictive accuracy and prognostic discriminatory ability of VNM stage was better than those of TNM stage.

Further, two nomograms were developed for predicting the overall survival. The VNM model had significant advantages in the predictive accuracy and prognostic discriminatory ability than TNM model. The predicted survival of VNM model showed well agreement with the actual survival.

A good staging system, which could not only be able to predict survival, but also guide the adjuvant therapy, is of great importance for patients with gastric cancer [35]. The predictive superiority of tumor volume demonstrated in current study was consistent with Jiang’s findings [33]. To show the improvement we got in this study, we then validated their formula using our data and found that the tumor volume calculated by our formula V = Tumor diameter × T stage2/2 revealed better predictive accuracy and prognostic discriminatory ability.

There are also some limitations in our present study. First, it was a retrospective study of a single center’s experiences. Multi-center studies are needed to verify the predictive value of tumor volume. Second, the calculation of tumor volume is not simple and immediate. Thus, a more convenient and accurate index which could reflect the tumor burden is needed.

From September 2008 to March 2015, a total of 3409 gastric cancer patients who received radical gastrectomy in our department were retrospectively analyzed. The inclusion criteria were listed as follows: 1) without neoadjuvant chemotherapy; 2) without multiple stomach tumors or distant metastasis; 3) with complete follow-up records. This study was approved by the Ethics Committee of Xijing Hospital, and written informed consent was obtained from all patients before surgery.

All of the patients received radical gastrectomy according to the recommendation of Japanese Gastric Cancer Treatment Guidelines [11]. The patients were followed up till November 2015 by enhanced chest and abdominal CT and gastroscopy every 3 months.

Data were processed using SPSS 22.0 for Windows (SPSS Inc., Chicago, IL, USA). With the X-tile software (Yale University) [37], the 3409 patients were randomly divided into training set and validation set according to sample size ratio of 1:1. The optimal cut-off values of tumor volume were calculated using X-tile software (Supplementary). Discrete variables were analyzed using the Chi-square test or Fisher’s exact test. Risk factors for survival were identified by univariate analysis and Cox’s proportional hazards regression model was employed for multivariate analysis. Overall survival was analyzed by the Kaplan-Meier method and differences between curves were compared using log-rank test. A backward procedure based on the Akaike information criterion (AIC) was used for multivariable selection. Nomogram and calibration curve were displayed using the package of Regression Modeling Strategies (http://CRAN.R-project.org/package=rms) in R (version3.1.2, http://www.R-project.org/). AIC and concordance index (C-index) values within a cox proportional hazard regression model were calculated in order to compare the prognostic discriminatory ability and predictive accuracy of variables using the package of Harrell Miscellanceous (http://CRAN.R-project.org/package=Hmisc.). A smaller AIC value indicated a better discriminatory ability [38], whereas a larger C-index represented a more predictive accuracy [39]. The likelihood ratio χ2 test was used to compare the different C-indexes between different models. The two-tail P value was considered to be statistically significant at the 5% level.

There are no financial or other relations that could lead to a conflicts of interest.