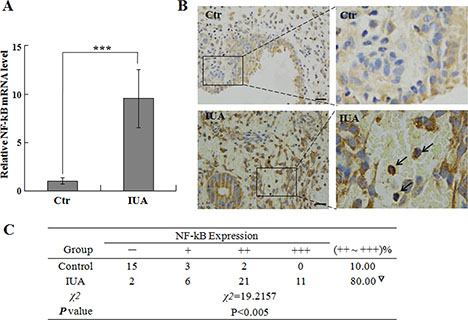 Figure 1: NF-κB expression in human Asherman syndrome patient samples. Endometrial tissues were collected from Asherman syndrome patient and control individuals for analysis of NF-κB expression by quantitative PCR (A) and IHC staining (B). In Figure A, the relative expression of NF-κB was first normalized to internal control GAPDH, then the expression of NF-κB in the IUA samples were normalized to the NF-kB level in the controls (set as 1). Arrows indicate the representative NF-κB positive cells. Scale bar = 10 uM. The intensity and percentage of positive staining signal were summarized in Figure (C) ***P < 0.001.

Immunohistochemistry (IHC) staining is a powerful method to detect protein expression and localization in tissues [16], therefore we performed IHC staining to determine NF-κB protein level and location in Asherman syndrome patient and normal control samples. Our IHC data revealed that the NF-κB p65 expression in the normal endometrium control samples is low and mainly located in the cytoplasm (Figure 1B), while in the endometrial samples from intrauterine adhesion patients, the NF-κB staining is strong and mainly located in the nucleus (Figure 1B, arrows), suggesting the activation of NF-κB signaling in the patient IUA samples. Quantification and statistical analysis of NF-κB staining revealed that the NF-κB protein expression is significantly elevated in the IUA samples from Asherman syndrome patients (Figure 1C), further indicating the important roles of NF-κB in the pathogenesis of Asherman syndrome.

To provide direct evidence of NF-κB in regulating pathogenesis of Asherman syndrome, we established an intrauterine adhesion rat model using phenol mucilage. Phenol mucilage was widely used for female sterilization by inducing the formation of intrauterine adhesion [17]. The phenol mucilage method is better than other methods such as mechanical injury to induce IUA because it’s easier to control the levels of damage using liquid phenol mucilage. As shown in Figure 2, HE staining of the uteruses revealed the abnormal morphology in the modeling uteruses from the IUA group. The uterine cavity was small and filled with hyperplastic tissues (Figure 2, arrow). The endometrial structure was irregular, the macrophages and plasma cells decreased and were replaced by large number of fibroblast (Figure 2, lower panel), suggesting the mis-regulated inflammation and repair process during the pathogenesis of IUA. We further performed Masson staining and found that the modeling uteruses from the IUA group had increased blue staining cells, suggesting severe fibrosis occurred in the modeling site of the IUA group uteruses (Figure 3). Overall, the above results revealed the successful establishment of Asherman syndrome rat model by phenol mucilage. 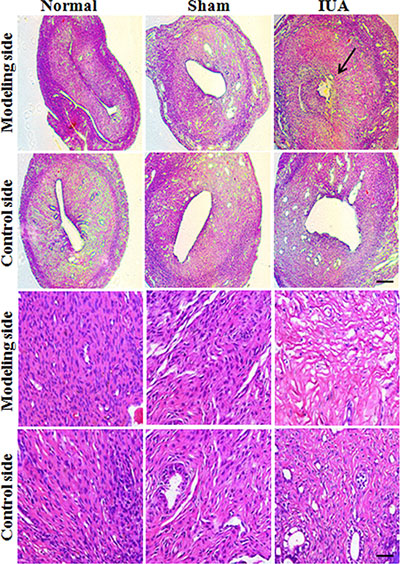 Figure 2: HE staining revealed the abnormal morphology in Asherman syndrome rats. 60 rats were randomly separated into three different groups: IUA group (30 rats for phenol mucilage treatment), sham group (15 rats with mock treatment) and normal group (15 rats with no treatment). For each rat, only one side of the uteruses was treated with phenol mucilage (modeling side), the other untreated side was defined as control side. The uteruses from three groups were collected for HE staining 10 days after treatment. Arrow indicates the intrauterine adhesion. Upper panels scale bar = 100 uM, lower panels scale bar = 10 uM. 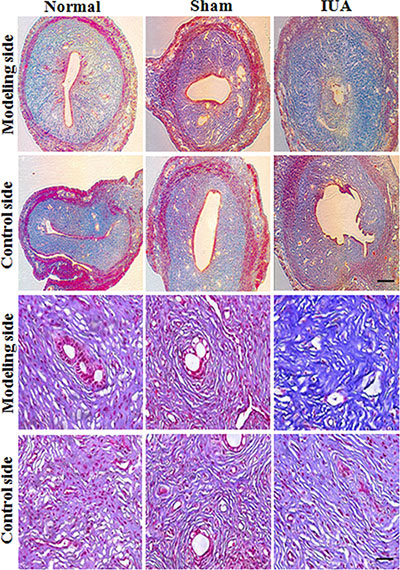 Figure 3: Masson staining revealed the abnormal morphology in Asherman syndrome rats. Rats were randomly separated into three different groups: IUA group (phenol mucilage treatment), sham group (mock treatment) and normal group (no treatment). Only one side of the uteruses was treated with phenol mucilage (modeling side), the other untreated side was defined as control side. 10 days after treatments, both sides (modeling side and control site) of the uteruses were collected for Masson staining. Upper panels scale bar = 100 uM, lower panels scale bar = 10 uM. 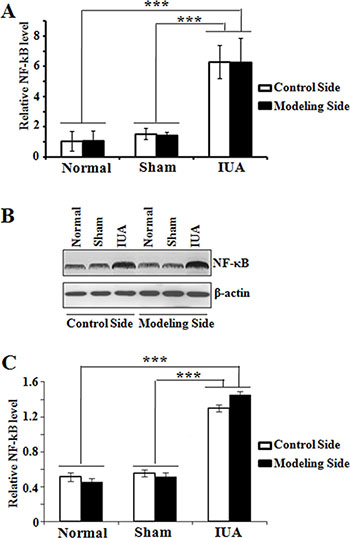 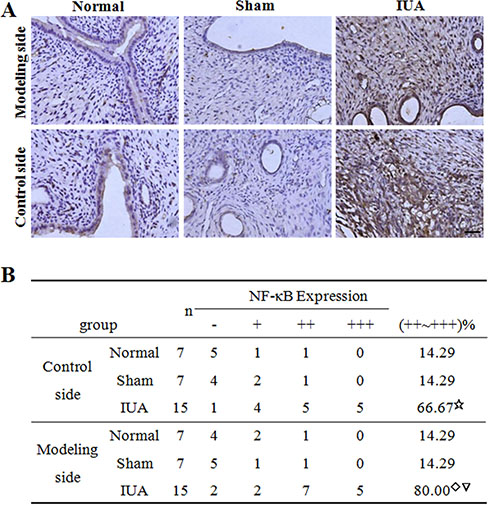 Figure 5: IHC staining of NF-κB in Asherman syndrome rats. Endometrial tissues were collected both sides of the uteruses from three different rat groups. (A) IHC staining of NF-κB in different samples. Scale bar = 10 uM. (B) Summarization of intensity and percentage of positive staining signal in A. ☆Comparison of IUA control side to Normal, Sham control sides, F = 17.1, P = 0.02; ◇Comparison of IUA modeling side to Normal, Sham modeling sides, F = 18.3, P = 0.01; ▽Comparison between control and modeling sides in IUA group, t = 0.325, P = 0.441. 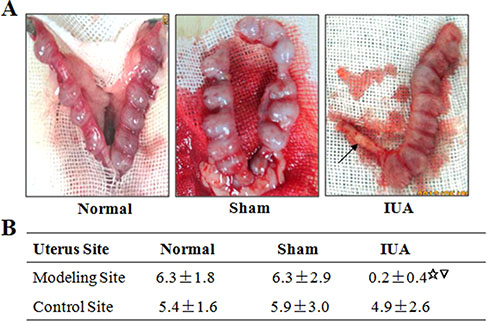 Figure 6: Intrauterine adhesion impaired pregnancy in Asherman syndrome rats. Pregnant rats of three groups were sacrificed to study the number of embryos in the uteruses. (A) Representative pictures of the isolated uteruses from three groups of rats. Arrow indicates the intrauterine adhesion. (B) Summary of embryo numbers in both side of uteruses from three rat groups. Normal: n = 8; Sham: n = 8; IUA: n = 15. ☆Comparison between three rat groups, P = 0.001; ▽Comparison between control and modeling sides in IUA group, P = 0.001.

Intrauterine adhesion and control tissues were collected between May 2014 and August 2014 from Nanshan Maternity & Child Healthcare Hospital of Shenzhen, Guangdong, China. 40 intrauterine adhesion tissues from Asherman syndrome patients and 20 normal endometrium tissues from secondary infertility control individuals were collected during hysteroscopy. There was no significant difference in age between the Asherman syndrome and control group. Written informed consents were obtained from all patients and the study protocols were approved by the Institutional Ethic Committee of the Hospital.

The formation of intrauterine adhesion in rats was induced using phenol mucilage. 60 rats were randomly separated into three different groups: IUA group (30 rats for phenol mucilage treatment), sham group (15 rats with mock treatment) and normal group (15 rats with no treatment). For each rat, only one side of the uteruses was treated with 0.04ml phenol mucilage (modeling side), the other untreated side was defined as control side. 10 days after treatments, both sides (modeling side and control side) of the uteruses from three groups were collected for the analysis of Asherman syndrome related phenotypes.

HE staining and masson staining

All measurement data were presented as mean ± sem. One-way ANOVA was used to analyze the data from different groups. The data were analyzed by SPSS for Windows 17.0 software package. P < 0.05 was defined as statistically significant.

We sincerely thank the patients for the contributions to this study. This work was supported by the Science and Technology Bureau of Nanshan District (201205 to Xiangzhen Wang).

The authors have declared no conflicts of interests.

6. Carp HJ, Ben-Shlomo I, Mashiach S. What is the minimal uterine cavity needed for a normal pregnancy? An extreme case of Asherman syndrome. Fertil Steril. 1992; 58:419–21. doi: