Prevalence and time trends of spina bifida in fourteen cities located in the Liaoning province of northeast China, 2006-2015

Spina bifida is a type of neural tube defect resulting from an incomplete closure of the spinal column leading to a herniation or exposure of the spinal cord or meninges. Notably, spina bifida is the most common birth defect that can cause disablement for a lifetime [1, 2]. Although a lower fatality rate, approximately 7%, for spina bifida has been observed when compared with the high fatality rate of encephalocele (46%) and anencephaly (100%) [3], spina bifida is associated with long-term physical and cognitive disabilities, which has been a worldwide public health burden [4, 5]. Numerous studies have extensively investigated the epidemiological characteristics of this disease. More specifically, a combination of genetic and environmental factors including family history [6, 7], pre-gestational diabetes [6, 8], maternal obesity [6, 9, 10], insufficient intake of folic acid [6, 11–13], and use of anticonvulsant medications [14, 15] have been established as characteristics of spina bifida. For example, mandatory folic acid fortification of staple cereal grains has been shown to dramatically reduce the risk of pregnancies complicated with spina bifida in many countries [11]. 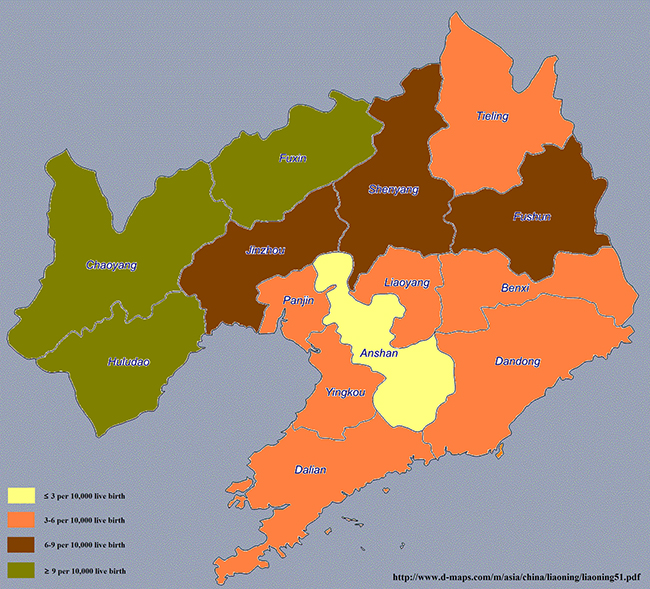 Figure 1: Prevalence of spina bifida in each city of the Liaoning province from 2006 to 2015.

The rate and time trend of spina bifida prevalence in each city of Liaoning province from 2006 to 2015 was presented in Figure 2. The overall prevalence decreased from 9.62 to 2.31 per 10,000 live births, with 11.57% per year (P < 0.01) (Table 1). When stratifying by cities, we observed decreasing trends in all cities. With the exception of Benxi, Dandong, Yingkou, Panjing, Tieling, and Huludao, the results of the other cites showed statistical significance for the decreasing trend (Table 1). Of note, the decreasing trend of spina bifida prevalence in the Liaoning province could be mainly attributed to cities of Shenyang, Fushun, and Jinzhou which accounted for almost one third (Table 1). 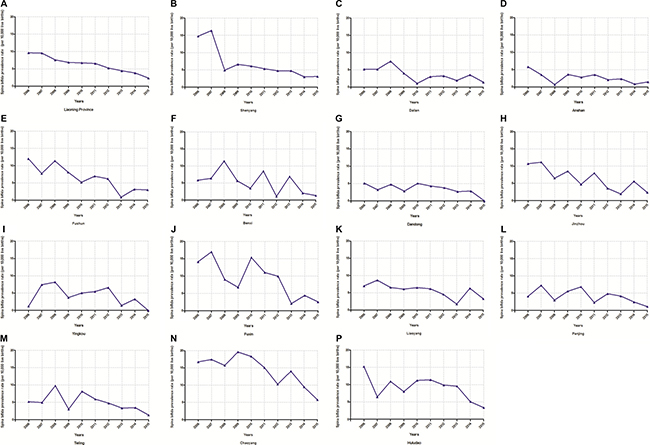 Table 1: Trends in spina bifida prevalence in each city of Liaoning during 2006–2015

*Spina bifida prevalence was expressed as per 10,000 live births.

†Percent change and average change between 2006 and 2015 was calculated by the spina bifida prevalence.

To our knowledge, the present study is one of the limited forms of documentation from China evaluating the time trend of spina bifida prevalence using the data from the recent decade. During the observational period, we observed significant decreasing trend of spina bifida in the Liaoning province from 9.62 per 10,000 live births to 2.31 per 10,000 live births. In addition, decreasing trends were observed in all 14 cities; nevertheless, not all of these cities exhibited statistical significance.

Since folic acid supplementation or food fortification is one of the best public strategies to prevent a spina bifida, termination of pregnancy for fetal anomaly is certainly not an optimal solution for this malformation [23]. As the first two countries require mandatory fortification of enriched cereal grain products with 140 μg of folic acid per 100 g, many studies from Canada and the United States have observed a reduction in these malformations after this policy [11]. As of mid-2012, approximately 2.2 billion people were affected after mandatory or voluntary programs were carried out in sixty-seven countries [11, 24]. Nevertheless, the regional differences of prevalence might be attributed to uncommon fortification in Asia and Europe [16]. In 2009, China initiated a nationwide folic acid supplementation program which provided folic acid supplements, free of charge, to all women who have a rural registration as well as who plan to become pregnant [25]. Interestingly, the prevalence of spina bifida in 2012 to 2015 decreased dramatically from that of 2009 in Liaoning province which may be partly due to the effects of this national policy. However, since the varied development of cities and the notion that less women began to take folic acid supplements before pregnancy in the rural area in northern China, not all of the 14 cities showed a statistically significant decreasing trend [26]. Hence, it is imperative that policymakers should focus on this issue in the future.

Several strengthens should be mentioned. The data of this population-based birth defects registry have been in good quality control [27]. Of note, the present study not only described the time trend and prevalence of spina bifida in all 14 cities of Liaoning province but also had a relatively longer observational period. However, limitations of our study include the following. First, we were unable to access the detail information (e.g., demographic or clinical factors) of all live births including cases of spina bifida, which has hindered our ability to focus on the potential causes for the trends. Secondly, because of the access permission, we failed to obtain the prevalence data before 2006 which limited us to investigate whether mandatory premarital physical check-ups, which became voluntary in China since October 1, 2003, play a role in the time trend of spina bifida [5]. Thirdly, the prevalence of spina bifida might be slightly overestimated since we set the denominator of the prevalence of spina bifida as the total number of births which included live births as well as still birth ≥ 28 weeks without induced and spontaneous fetal deaths ≤ 28 weeks [28]. Fourthly, under-reporting may occur in the Shenyang Women and Children Health Care Center compared to these systems in many developed countries since our center began collecting information in 1992 and were vulnerable to several common technical problems that could jeopardize the quality of the collected data [29]. Lastly, since the seventh day after birth was set as the maximal diagnosis time for spina bifida cases [27]. We failed to include sixty-six cases of spina bifida in this study which were confirmed after the seventh day. Herein, the calculated prevalence of spina bifida may be slightly lower than that which includes longer periods.

The Liaoning Women and Children’s Health Hospital is one of the primary obstetrical and gynecological hospitals for the Liaoning province as well as a comprehensive care institution and has been mainly responsible for the healthcare and guidance for women and children of Liaoning. The maternal and child health certificate registry of Liaoning province which provided data from 2006 to 2015 was maintained by this hospital. This registry not only covers all 14 cites of the Liaoning province (Shenyang, Dalian, Anshan, Fushun, Benxi, Dandong, Jinzhou, Yingkou, Fuxin, Liaoyang, Panjing, Tieling, Chaoyang, and Huludao) but also set hospital-delivered live birth and stillbirth infants as monitored subjects. The seventh day after birth was set as the maximal diagnosis time for a congenital malformation case [27].

The procedural details of data collection were previously described [27]. Briefly, we used a ‘Birth Defects Registration Form’ to collect the related information on the infants with spina bifida. To complete the aforementioned form, a trained obstetric or pediatric specialist interviewed the mother of the infant, once the monitor hospital identified and confirmed a spina bifida. Subsequently, the ‘Birth Defects Registration Form’ was first submitted to the local maternal and child health facility and then to Liaoning Women and Children’s Health Hospital. A group of state-level experts in medical genetics and pediatrics reviewed and confirmed the data of these cases [27].

Spina bifida is defined as a bony defect of the spine with exposure of meninges and/or neural tissue [23], according to the World Health Organization’s International Classification of Diseases, 10th Revision. As such, we included all isolated, multiple cases of spina bifida in the analyses. We requested case ascertainment after termination or examination for these suspected spina bifida cases. Hence, we identified t3,248,954 live births and wo thousand and forty-nine cases of spina bifida during the observational period.

The data quality control was previously described in detail [27]. In brief, according to the program manual to ensure high quality data, the disease diagnosis, data collection, data checking, and medical records were verified by the expert group at each level. In addition, an independent retrospective survey was organized by the experts to find deficiencies and inaccuracies in the data [27].

The birth prevalence of spina bifida was expressed per 10,000 live births. The denominator was based exclusively on the total number of live births. Spina bifida prevalence was calculated for nine 1-year time intervals from 2006 to 2015. To look specifically at time trends, the Poisson regression model was used to find the line of best fit for spina bifida prevalence by year, with year entered into the model as a continuous independent variable [29–32]. The 95% confidence interval (CI) of the average change was calculated by the methods for population-based cancer statistics recommended by the National Cancer Institute [33]. We also calculated the relative contributions for rate changes, which are used for determining the contributions individual cities made to the overall trend [29–34]. All analyses were conducted using SPSS for Windows (version 22, SPSS Inc, Chicago, IL, USA). Two-sided P values < 0.05 were considered statistically significant unless otherwise specified.

This study was supported by the Liaoning Providence science and technology project (2015225025 for Yan-Hong Huang) and Shenyang science and technology project (F15-139-9-09 for Yan-Hong Huang). This study was supported by the Natural Science Foundation of China (No. 81602918 for Qi-Jun Wu) and the Doctoral Start-up Foundation of Liaoning Province (No. 201501007 for Qi-Jun Wu).