We retrospectively collected a total of 797 stagedII-IVb[UICC = (Union for International Cancer Control criteria (7th edition)] NPC patients at the department of radiation oncology of tumor hospital affiliated with Guangxi Medical University, Nanning PR China, from January 2007 to December 2014. Included 261 cases treated with CCRT and 536 patients treated with CCRT+AC. The inclusion criteria:(1) All the patients were initial treatment who never received any chemotherapy or radiotherapy ;(2)patients aged ranged from 16 to 75 with no distant metastasis ;(3)KPS ≥70 ;(4) pathologic type was non-keratinizing and undifferentiated carcinoma. Those who had radiotherapy, chemotherapy or surgery to the head and neck,or those patients who had double cancer, serious heart and lung diseases ,distant metastasis before treatment were exclusion. Before treated , all the patients had a medical history, physical examination, assessment of performance status, complete blood cell count, full bio-chemical profile, EB-virus DNA copies, electrocardiogram, chest computerized tomography (CT), abdominal ultrasound, magnetic resonance imaging (MRI) for nasopharyngeal and neck , nasopharyngeal fiber optic endoscopy and bone scan. In CCRT+AC group ,all the participants were received cisplatin plus 5-fluorouracil (PF) as the pattern of adjuvant chemotherapy .Because the KPS of baseline between the two groups were statistically significant difference . So we selected totally 261 patients who received CCRT , we matched 1:1 with the CCRT group on age, sex, overall stage, T classification, N classification, KPS, as the CCRT+AC group. After matched ,the baseline data of the two groups balance. (Table 1)

Table 1: Baseline patient characteristics in the pre-matching and post-matching cohort 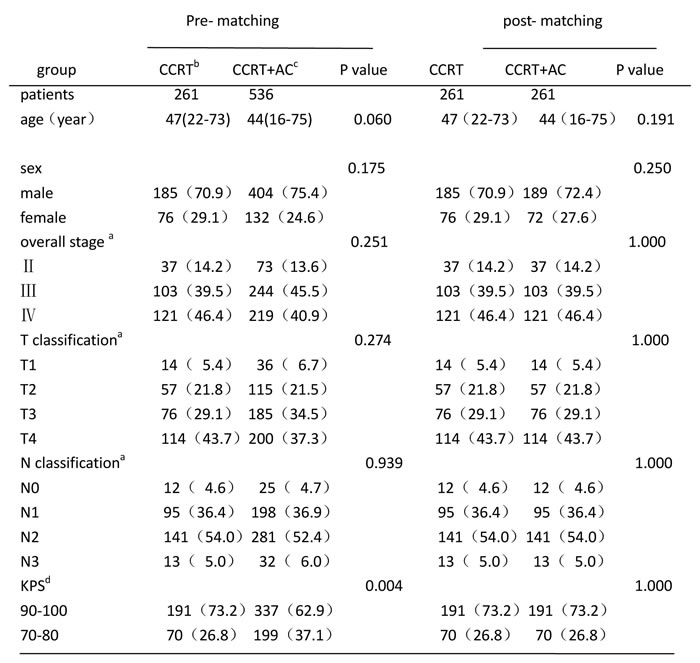 a By Union for International Cancer Control criteria (7th edition).

The method of matching ,first is selected a total of 261 CCRT patients, then matching 1:1 on age, sex, KPS, overall stage , T classification, N classification with the CCRT group, selected the satisfactory patients from 536 patients in CCRT+AC

All enrolled patients were received intensity-modulated radiotherapy(IMRT) technique what was administered by a 6 MV-X ray liner accelerator. Patients were immobilized with a head- -neck-shoulder thermoplastic mask in the supine position. Then a CT simulation was carried out to scan the head and neck from the bottom-up. The scan range from the vertex to 2 cm below the clavicle. The slice extending from 2cm over the anterior clinoid process to the level of cartilagines thyreoidea. The slice thickness was 2.5mm, apart from 2.5mm,the remaining were 5mm. We use Precise Plan 2.11(Elekta,Crawley,UK)he Philips pinnacle v8.0(Philips Medical Systems,Milpitas,CA) to delineat the target volumes. The target volumes were delineated according to the International Commission on Radiation Units and Measurements Reports (ICRU)50 and 62.Gross tumor volume in the nasopharynx (GTVnx) stands for what we saw the gross tumor from the clinical examination and imaging examination . Gross

Concurrent chemotherapy :1 to 3 cycles of Cisplatin alone 100mg/m2 every 3 weeks;

But the p value of chemotherapy regimen between two groups had significantly difference ,so we merged patients who receiving 2 cycles with 3 cycles in order to reduce the errors.(Table 3)

Table 2: chemotherapy administrated to 522 NPC patients in the pro-merging groups

b PF= Cisplatin plus 5-fluorouracil

After all treatment completion, all patients were subsequently followed up every 3 months for the first two years . Every 6 months through the following 3 to 5 years, and then per annum. The follow-up content including body check, complete blood cell count, liver and kidney founctions, EB virus DNA copies, chest computerized tomography (CT), abdominal ultrasound, magnetic resonance imaging (MRI) for nasopharyngeal and neck , nasopharyngeal fiber optic endoscopy and bone scan. The primary endpoint was OS,LFFS,DMFS. The whole group median follow-up period was 25.65 months( range, 2.13-98.70 months).

Table 3: chemotherapy administrated to 522 NPC patients in the post-merging groups

b PF= Cisplatin plus 5-fluorouracil

All data were analyzed by the statistical package for Social Sciences, version 19.0 (SPSS,Chicago, IL.USA).We measured the survival time from the first day the patient diagnosed NPC to the day of the event. Theχ2 test was used to compare the based-line data(e.g: sex, KPS, clinical stage, T classification ,N classification). For those small sample data we used the fisher’s exact test. Using independent-samples T test to compare the age. The Kaplan-Meier method was used to calculate the OS,LFFS and DMFS rates. The log-rank test was used to compare the statistical differences in endpoints in both groups. Using Cox proportional hazards model to calculate the Multivariate analysis. All statistical tests were two-sided, and P<0.05 was considered statistically significant .

b= Course of adjuvant chemotherapy

Table 5: The results from Stratified analysis in CCRT group and CCRT+AC group 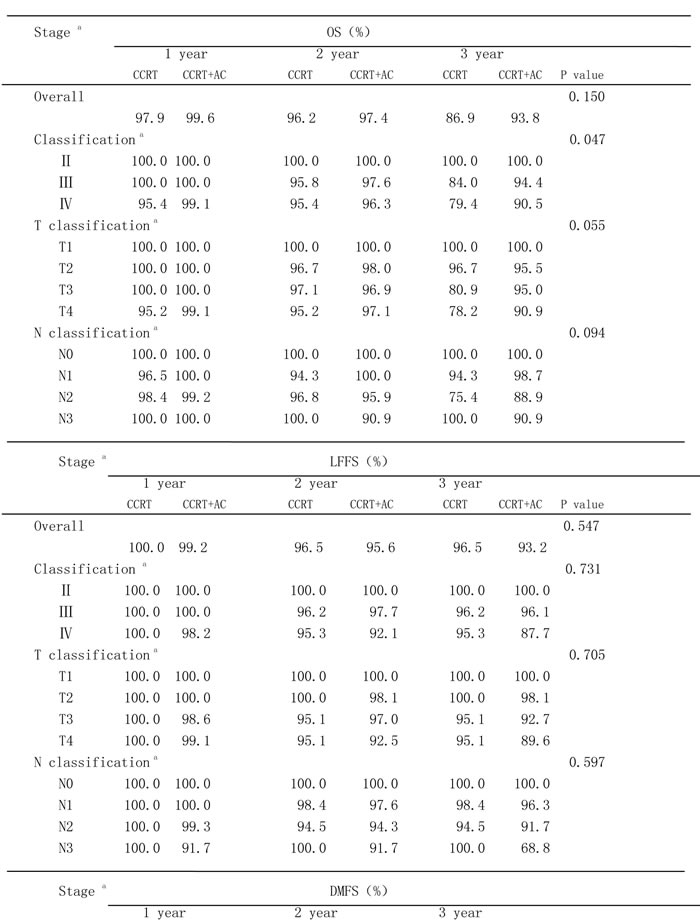 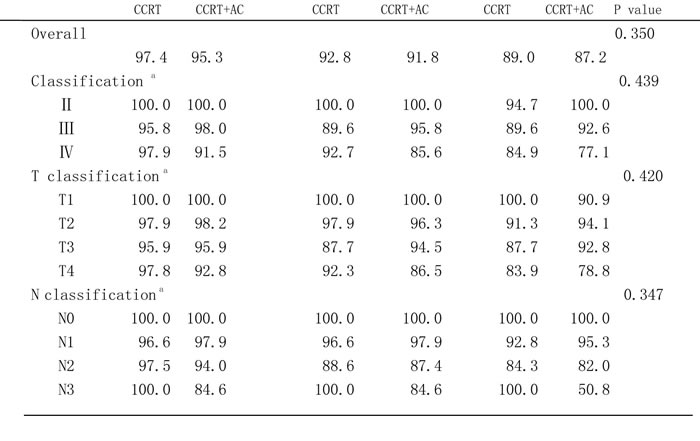 a = By Union for International Cancer Control criteria (7th edition)

Table 6: The distribution of 42 NPC patients with distant metastasis 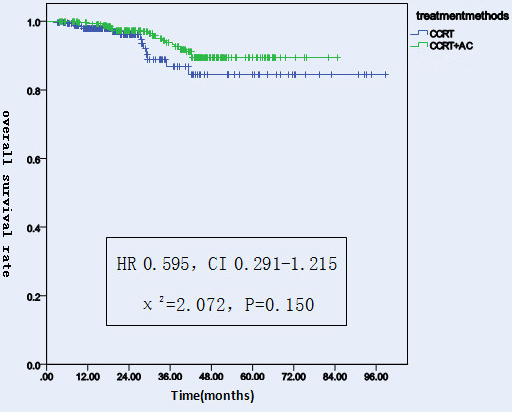 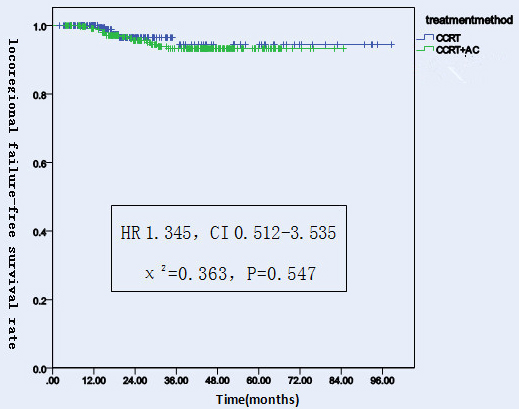 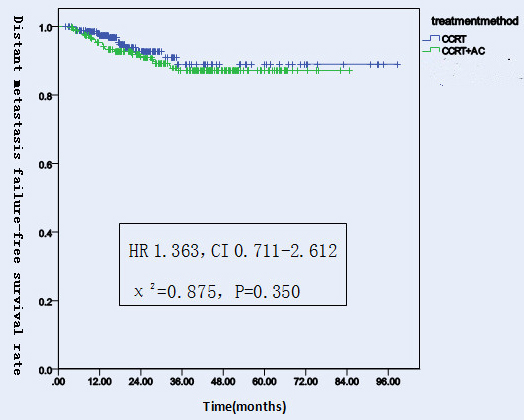 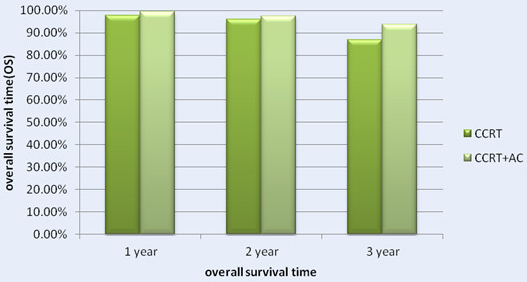 Figure 4: The 1-, 2- and 3- Year Overall Survival Rate (OS) for Patients with CCRT in Comparison with CCRT + AC for NPC patients.

Figure 5: The 1-, 2- and 3- Year locoregional failure-free survival rate (LFFS) for Patients with CCRT in Comparison with CCRT+AC for NPC patients.

Figure 6: The 1-, 2- and 3- Year distant metastasis failure-free survival rate (DMFS) for Patients with CCRT in Comparison with CCRT+AC for NPC patients.

Although our trail is a big data retrospective analysis, it has several limitations. The reliability needs more prospective studies to verify the conclusion.

The study was approved by the Ethics Committee of the Cancer Hospital of Guangxi Medical University.

The authors declare no financial conflicts of interest regarding the design or results of this study.