Incidence and risk of infections associated with EGFR-TKIs in advanced non-small-cell lung cancer: a systematic review and meta-analysis of randomized controlled trials

Lung cancer is one of the most common malignancies and the most frequent cause of cancer-related mortality worldwide [1]. Despite the significant improvement in chemotherapy regimen for the treatment of advanced non-small-cell lung cancer (NSCLC), the 5-year survival for these patients remains relative poor [2, 3]. Thus, novel agents are urgently needed to improve the prognosis of these patients.

The epidermal growth factor receptor (EGFR) is a member of the HER family of receptor tyrosine kinases which plays a critical role in regulating the development and progression of many solid tumors including NSCLC [4-6]. Thus, EGFR and its related signal pathway have been regarded as attractive therapeutic targets in the treatment of NSCLC [7, 8]. Currently, three anti-EGFR agents, gefitinib, erlotinib and afatinib have been approved for use in EGFR mutation-positive NSCLC patients [9, 10]. Although EGFR-TKIs are generally well tolerated, a pattern of adverse events such as skin rash, diarrhea, thromboembolic events and interstitial lung disease have been reported [11-15], which is different from traditional cytotoxic agents. Infections have been reported with anti-EGFR agents. In 2014, Qi et al. performed a meta-analysis and found a significantly increased risk of severe infectious events associated with the use of anti-EGFR mono-clonal antibodies cetuximab and panitumumab in cancer patients (RR 1.34, p = 0.003) [16] . However, whether EGFR-TKIs increase the risk of infections in NSCLC remains unknown. We thus perform this meta-analysis and systematic review of available randomized controlled trials to determine the overall incidence and risk of infections in NSCLC patients treated with these drugs.

We identified a total of 362 related studies through the database search, and retrieved 52 full-text studies for evaluation. The reasons for study exclusion were illustrated in Figure 1. As a result, 25 RCTs with 13,436 patients were included for the present study [17-41]. The baseline characteristics of each trial were presented in Table 1. For the indications of the included studies, there were eight trials in first-line settings, two trials in adjuvant settings, and fifteen trials in the subsequent lines of treatment (maintenance or second line, Table 1). An open assessment of the included trials was carried out by using Jadad scale, and fourteen trials were placebo-controlled, double-blinded randomized trials with Jadad score of 5, and eleven trials had Jadad scores of 3.

Table 1: baseline characteristics of 25 trials Included in the Meta-analysis (n=17,420) 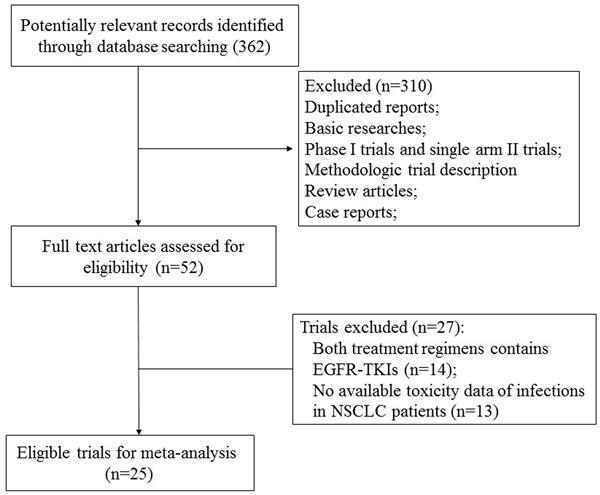 Figure 1: Studies eligible for inclusion in the meta-analysis 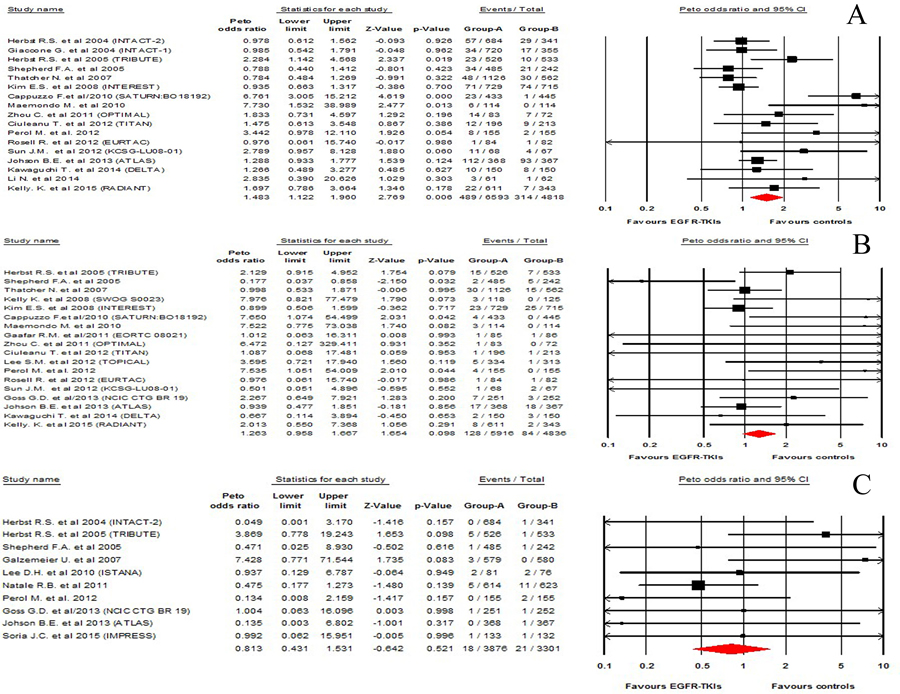 Figure 3: Meta-regression analysis of trends between treatment duration and relative risk of infections: symbols: each study is represented by a circle the diameter of which is proportional to its statistical weight.

A total of 17,420 NSCLC patients from 25 RCTs is included for analysis. As far as we known, our study is the first large meta-analysis to show a significantly increased risk of developing EGFR-TKIs related infection (Peto OR 1.48, p = 0.006) in NSCLC patients, but not for high-grade and fatal infectious events. Moreover, we perform a meta-regression analysis to assess the relationship between EGFR-TKIs treatment duration and risk of infections. The result shows that the peto OR of all-grade infections tends to be increased with EGFR-TKIs treatment duration, but it is not statistically significant (p = 0.26). As a result, clinicians should pay more attention to the risk of infections during the administration of EGFR-TKIs. Moreover, clinicians should treat NSCLC patients with any active infection before the initiation of EGFR-TKIs treatment.

Multiple mechanisms might involve in the development of infection. Basic research conducted by Lewkowicz et al [45] found TNF-α induced respiratory burst and phagocytic activity could be enhances by EGFR and its signal pathway. A recent study conducted by Li et al also demonstrated that EGFR play a critical role in the process of Tamm-Horsfall glycoprotein-enhanced neutrophil phagocytosis, and this effect could be suppressed by EGFR inhibitor [46]. However, more high-quality research are still recommended to determine the mechanisms of EGFR-TKIs associated infections.

Several limitations need to be mentioned in the present study. Firstly, as our study is a retrospective analysis of published studies, the baseline characteristics of each studies, such as dosage of EGFR-TKIs, periods of study conduct, and treatment regimens, might be potentially different, which might increase the heterogeneity among included studies. Second, we could not get individual patient data from each published studies, thus we could not perform a comprehensive analysis by adjusting baseline factors that existed between included trials.

In conclusion, our study has demonstrated that treatment with EGFR-TKIs in advanced NSCLC is associated with an increased risk of all-grade infections, but not for high-grade and fatal infections. Clinicians should be aware of these risks and provide regular follow-up for these toxicities.

We performed this systematic review adhering to the Preferred Reporting Items for Systematic Reviews and Meta-Analyses (PRISMA) statements [47]. Our study was a meta-analysis of published data, and all of these included trials had been approved by the ethics committee, thus the ethical approval in our study was waved. To identify studies for inclusion in this study, we did a broad search of four databases, including Embase, Medline, the Cochrane Central Register of Controlled Trials, and the Cochrane Database of Systematic Reviews, from the date of inception of every database to December 2015. Key words were “erlotinib”, “gefitinib”, “non-small-cell lung cancer”, “lung carcinoma”, “lung neoplasm”, “randomized controlled trial” and “infections”. The search was limited to prospective randomized clinical trials published in English. Each publication was reviewed and in cases of duplicate publications only the most complete, recent, and updated report of the clinical trial was included in the meta-analysis.

To be included for analysis in our systematic review and meta-analysis, the trials had to meet all the following criteria: 1) patients with pathologically confirmed non-small-cell lung cancer; 2) trials comparing therapy with or without EGFR-TKIs (erlotinib and gefitinib); 3) the included study had sufficient data for extraction. We assessed the quality of reports of clinical trials by using the 5-item Jadad scale including randomization, double-blinding, and withdrawals as previously described [48, 49].

Two independent investigators reviewed the titles and abstracts of potentially relevant studies. We retrieved the full text of relevant studies for further review by the same two reviewers. A third senior investigator resolved any discrepancies between reviewers. If reviewers suspected an overlap of cohorts in a report, they contacted the corresponding author for clarification; we excluded studies with a clear overlap. We extracted the following data: first author’s name, year of publication, number of enrolled subjects, treatment regimens, number of patients in treatment and controlled groups, median age, median treatment duration, median progression-free survival, median overall survival and adverse outcomes of interest (infections). The following adverse outcomes were considered as infectious events and were included in the analyses: Infections (not specified), febrile neutropenia, sepsis, septic shock, lung infection, respiratory tract infection and pneumonia. Adverse events of severe infections (≥grade 3), as assessed and recorded according to the National Cancer Institute’s common terminology criteria (NCI-CTC, version 2 or 3; http://ctep.cancer.gov), were extracted for analysis, which has been widely used in cancer clinical trials.

Statistical analysis of the overall incidence and relative risk for all-grade, high-grade and fatal infections was calculated using comprehensive meta-analysis software version 2.0(Biostat, Englewood, NJ, USA). We used the Peto method to calculate ORs and 95% CIs because this method provided the best confidence interval coverage and was more powerful and relatively less biased than the fixed or random effects analysis when dealing with low event rates [50]. To calculate peto odds ratio (OR), patients assigned to EGFR-TKIs were compared only with those assigned to control treatment in the same trial. Additionally, to test whether effect sizes were moderated by differences in length of treatment, we carried out meta-regressions with difference in median length of experimental treatments (expressed in days) as predictor and relative risk as dependent variable. Between-study heterogeneity was estimated using the χ2-based Q statistic [51]. Heterogeneity was considered statistically significant when P heterogeneity < 0.1. If heterogeneity existed, data was analyzed using a random effects model according to the method of DerSimonian and Laird [52]. In the absence of heterogeneity, the pooled estimate calculated on the basis of the fixed-effects model was reported using an inverse variance method. A statistical test with a p-value less than 0.05 was considered significant. The presence of publication bias was evaluated by using the Begg and Egger tests [53].