Diffuse large B-cell lymphoma (DLBCL) is the most common form of lymphoma, accounting for 25% to 30% of all newly diagnosed cases of adult non-Hodgkin lymphoma (NHL). However, DLBCL is also classified as a heterogeneous entity, encompassing a number of morphologic variants, various biologic abnormalities, and variable clinical behaviors and responses to treatment [1]. A number of prognostic factors have been studied, such as the international prognostic index (IPI) [2], gene expression profiling (GEP) [3], immunohistochemistry-based detection of prognostic biomarkers [4, 5], and early interim analysis with positron emission tomography [6, 7] following the initiation of chemotherapy. Although these factors are useful for identifying patients who would benefit from standard therapy, many of these methods are costly [8], difficult to perform or not easily interpreted [9, 10], and they are tested at one point in time [11].

The peripheral blood lymphocyte/monocyte ratio (LMR) is a simple and effective biomarker for both host immune homeostasis (e.g., ALC, tumor-infiltrating lymphocytes) and the tumor microenvironment (e.g., AMC, tumor-associated macrophages). Previous studies have shown that the LMR obtained at diagnosis using the complete blood count (CBC) may predict clinical outcomes in DLBCL [12–15]; patients with a lower LMR (<3.8) showed a lower complete remission rate, 2-year PFS, and 3-year OS compared to patients with LMR ≥ 3.8 [16]. A limitation of the LMR is its inability to assess the host/tumor interaction after treatment, as it is performed at one point in time. However, the effects of LMR recovery from a low level upon diagnosis, after therapy, remain unclear. Thus, we explored whether peripheral LMR recovery from low levels at diagnosis, after completion of first-line therapy, can predict clinical outcomes in DLBCL.

There were 173 patients enrolled in this retrospective study. The median age for this cohort was 59 years (range, 18–80 years). The distribution of additional baseline characteristics of these patients are shown in Table 1. Median follow-up after diagnosis was 29 months for the entire cohort (range 6 to 120 months) and for censored observations. A total of 49 patients experienced relapse, disease progression, or death. The median PFS was 22 months (range 1–103 months), while the median OS was 29 months (range 6–120 months).

Table 1: Baseline patients’ characteristics based on LMR at diagnosis and at completion of therapy

LMR at diagnosis and upon completion of chemotherapy and clinical outcomes 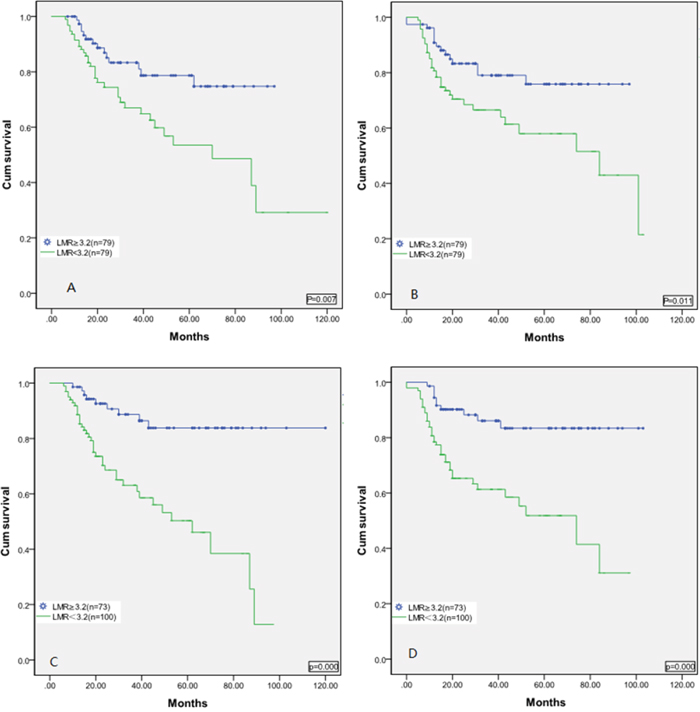 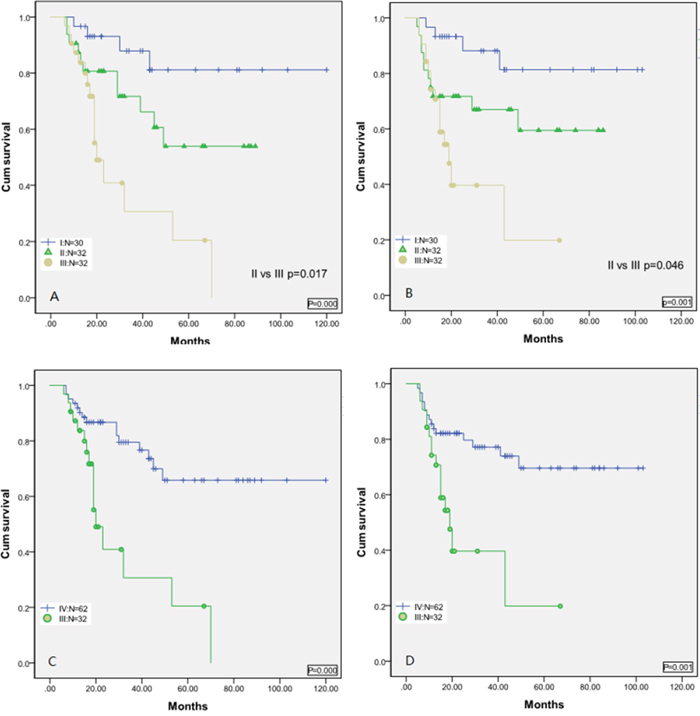 LMR increases versus LMR failed to increase upon completion of therapy when patients had a low LMR < 3.2 at diagnosis

Table 2: Baseline patients’ characteristics with a low LMR<3.2 at diagnosis based on LMR elevated versus LMR failed to gain a higher value at the completion of therapy

The influence of the following variables on PFS and OS was evaluated in all 94 patients who had a low LMR<3.2 at diagnosis: LMR elevated or not, the LMR following the completion of therapy, the presence of B symptoms, and stage III/IV were significantly associated with clinical outcome upon univariate analysis (Table 3). Multivariate analysis revealed that only LMR elevated or not at the completion of first-line therapy remained an independent prognostic factor for OS and for PFS.

Table 3: Univariate analysis for overall survival and progression-free survival in patients with a low LMR<3.2 at diagnosis

DLBCL is classified as a heterogeneous entity; thus, numerous prognostic factors are required to guide physicians in the identification of patients who would benefit from standard therapy. However, all of these factors have limitations [17].

Based on previous studies, there are still several important questions to explore. For example, the cutoff values of the LMR at diagnosis, predicting clinical outcomes in patients with DLBCL, ranged from 2.1 to 3.8, as reported by Tadmor et al. [19] and Li et al. [16], respectively, although the authors used the same method [20]. We found that the different investigators used different cutoff values in calculating the LMR, so it is difficult to apply LMR to predict outcomes in practical clinical work. To account for this limitation, we compared the LMR upon completion of chemotherapy to the baseline, but not to the cutoff value, in patients with lower LMR at diagnosis. In addition, we did find it had prognostic significance. Host immunity (i.e., ALC) and tumor microenvironment (i.e., AMC) interaction during standard chemotherapy in DLBCL directly impacts survival.

It remains possible that the high LMR represents the normal immune status, and LMR ≥ 3.2 represents the normal LMR range. Thus, patients with high LMR at diagnosis have no correlation with whether LMR increased after the completion of therapy, as long as the LMR remained at high levels. It should be noted that LMR < 3.2 represents host immunological incompetence. Thus, after therapy, increased LMR is representative of immune recovery. Which also means the patients benefit from chemotherpy and they had a better prognosis. They only follow the NCCN guideline during the follow-up periods..

LMR failing to recover from the low level at diagnosis, after the completion of therapy, is associated with poor clinical outcomes. Thus, these patients may require more frequent evaluation, and salvage regimens are recommended in the case of relapse.

Our results are consistent with the study by Porrata et al. [21], who explored the LMR during each rituximab, cyclophosphamide, doxorubicin, vincristine, and prednisone (R-CHOP) cycle as a predictor for survival. They found that decreasing below an LMR ≥ 1.1 during treatment, despite having LMR ≥ 1.1 at diagnosis/cycle 1, resulted in an inferior clinical outcome, and patients reaching an LMR ≥ 1.1, despite having an LMR < 1.1 at diagnosis/cycle 1, was associated with improved clinical outcomes. A similar result can be attained from classical Hodgkin lymphoma during ABVD treatment cycles [22].

There are some limitations to our study. First, it was conducted in a single center, and it is a retrospective analysis on a small number of patients. Thus, further multicenter prospective studies containing more patients are required. Second, because some patients' detail pathology information were missing. So we did not divide the patients into two subtypes: germinal-center B-cell-like DLBCL (GCB-DLBCL) subtype and activated B-cell-like DLBCL (ABC-DLBCL) subtype. GCB subtype has better prognosis than ABC subtype. But the prognostic significance of LMR with respect to different cell-of-origin subtypes is inconsistent. In one study, L.F. Porrata [23] found that LMR was independent of cell of origin in DLBCL patients.. But in the other study, it was shown that low LMR is a negative prognostic marker for non-germinal center (GC) type DLBCL patients, but not in GC-type DLBCL patients [24].

In conclusion, LMR at diagnosis and following completion of first-line therapy is a simple and cost-effective biomarker predicting clinical outcomes and provides a platform for developing therapeutic interventions to manipulate the LMR and improve clinical outcomes in DLBCL patients. LMR recovery from the low level at diagnosis, irrespective of whether the LMR reached the cutoff value, was associated with improved clinical outcomes. However, further studies are required to confirm our results.

The inclusion criteria were a diagnosis of de novo DLBCL, treatment with R-CHOP (rituximab, cyclophosphamide, hydroxydaunorubicin, vincristine, and prednisone), and follow-up at the First Affiliated Hospital of Wenzhou Medical University between January 2005 and June 2016. The dose of rituximab was 375 mg/m2 for all patients. Exclusion criteria were as follows: patients with primary central nervous system lymphoma, with transformed NHL, were treated with combined R-CHOP and irradiation, were positive for human immunodeficiency virus, or were lost to follow-up. From 2005 to 2016, 173 consecutive patients were enrolled and laboratory data of all patients were collected from electronic medical records. The research protocol was approved by the Ethics Committee of the First Affiliated Hospital of Wenzhou Medical University and performed in accordance with the principles of the Declaration of Helsinki, and written informed consent was obtained from every patient. They were followed until June 2016 to obtain survival information.

Lymphocyte and monocyte counts were obtained from standard complete blood cell count (CBC) data; each LMR was calculated by dividing the lymphocyte by the monocyte count. The LMR upon completion of first-line therapy was calculated when the CBC reached a plateau after the bone marrow had recovered from first-line therapy. It is the standard practice of our clinicians to obtain a CBC 3 months after completion of chemotherapy. Therefore, we used LMR data from the 3-month follow-up visits.

The threshold of 3.2 was established as the maximum (sensitivity + specificity) point according to the area under curve (AUC) of the receiver operating characteristics curve (ROC; Figure 4). The binary clinical outcome (death/survival) was determined 5 years after diagnosis. Patients were categorized as “alive/censored” when the follow-up time was longer than 5 years and “dead” when they died before this time. Patients were further divided into two groups: low LMR group (LMR < 3.2) and high LMR group (LMR ≥ 3.2). 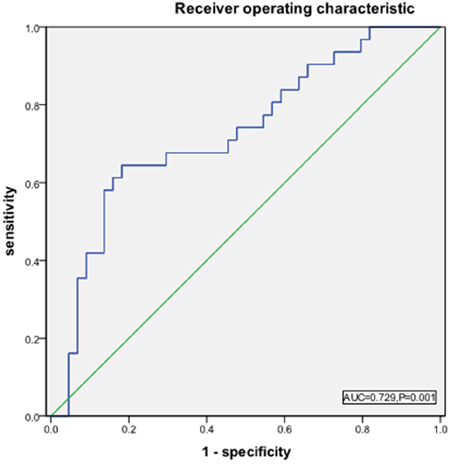 The definitions of the response and relapse criteria, OS and PFS, were those described in the guidelines of an NHL international workshop. OS and PFS were measured from the day following completion of first-line therapy. Statistical analysis was performed using IBM SPSS Statistic v21.0 (SPSS Inc., Chicago, IL, USA). Correlations of the LMR with clinical parameters were evaluated using the chi-square or Fisher’s exact test. OS and PFS were analyzed using Kaplan–Meier curves, which were compared using the log-rank test. Multivariate prognostic analyses of OS and PFS were performed using Cox proportional hazards regression models. Categorical variables were compared using the chi-square test. P < 0.05 was considered statistically significant and all P values were two-tailed.

The authors thank the patients, their families, and all the investigators, including the physicians, nurses, and laboratory technicians in this study.

CONFLICTS OF INTEREST AND GRANT SUPPORT