Efficacy of sequential therapies with sorafenib-sunitinib versus sunitinib-sorafenib in metastatic renal cell carcinoma: A systematic review and meta-analysis

Sequential therapies with sorafenib and sunitinib is well tolerated and efficient in mRCC. However, there are no evidence supported that sorafenib–sunitinib has the superiority to sunitinib-sorafenib in sequence. The ideal sequence of targeted agents requires further elucidation.

Metastatic renal cell carcinoma (mRCC) is the spread of the primary renal cell carcinoma from the kidney to other organ [1]. Due to its mild clinical signs, as many as 30% of people have metastatic disease by the time they are diagnosed with renal cell carcinoma [2]. The most common sites for metastasis are the lymph nodes, lungs, bones, liver and brain [3]. mRCC is notoriously resistant to available chemotherapy and radiotherapy [4], and the 5 year survival rate for mRCC remains under 15% [5].

Sequential therapies with distinct targeted drugs have become a standard protocol when patients suffering from disease advanced during treatment [7]. Consequently, probing how to sequence molecular targeted drugs in an optimal way is essential for maximization of clinical benefit in patients with mRCC. Does the therapeutic order of sorafenib and sunitinib in mRCC really matter? Parts of recent retrospective studies have suggested that sorafenib followed by sunitinib (So-Su) was optimal to sunitinib followed by sorafenib (Su-So) in progression-free survival and overall survival [8-12]. Nevertheless, a recent randomized controlled trial SWITCH [13] and several retrospective studies [14-17] argued that So-Su and Su-So offer similar clinical efficacy in mRCC, with no statistically differences.

The search of PubMed, Embase, Cochrane Library and ClinicalTrails.gov provided 902 recordings total. In addition, manual search revealed 2 additional records. Then, 21 were selected for full-text review depending on pre-planned inclusion criteria. Finally, 7 studies were available for quantity analysis owing to their adequate quality and sufficient data. Other 3 studies were used as qualitative synthesis only. Full details of the selection process were disclosed in Figure 1 and the main characteristics of included studies were displayed in Table 1. 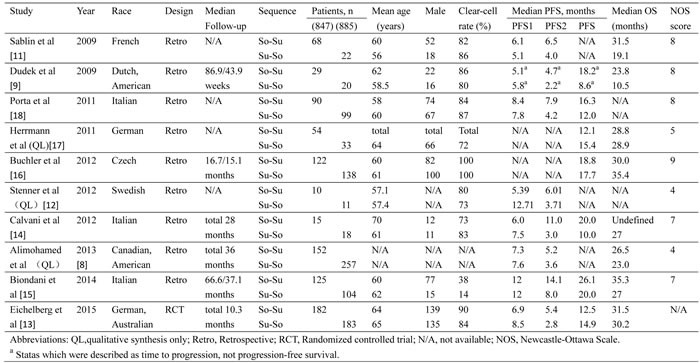 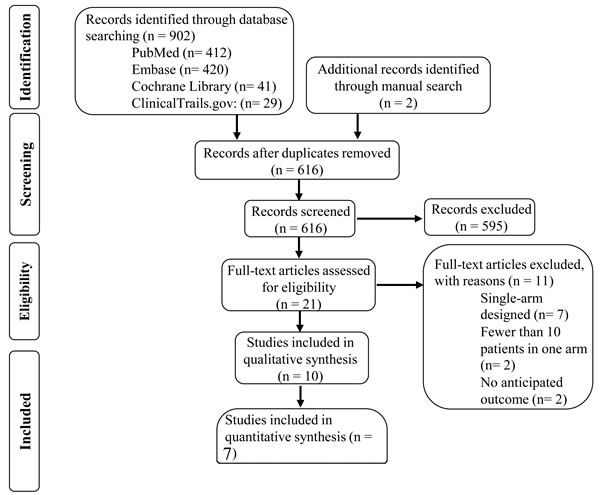 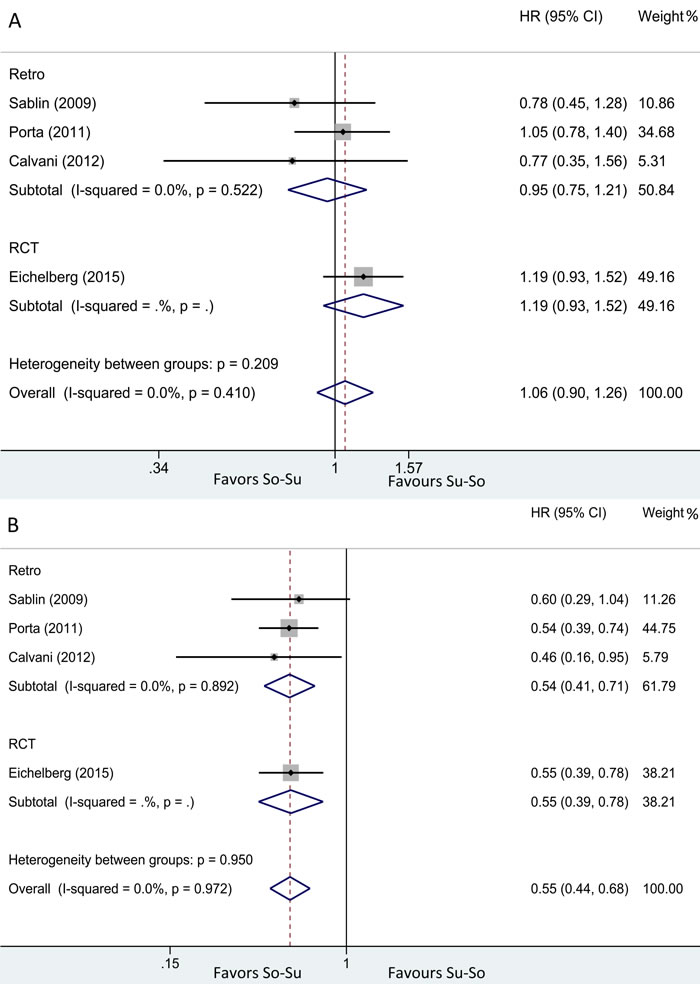 Figure 2: Hazard ratio for (A) PFS1, (B) PFS2 in overall population treated with So-Su over Su-So. 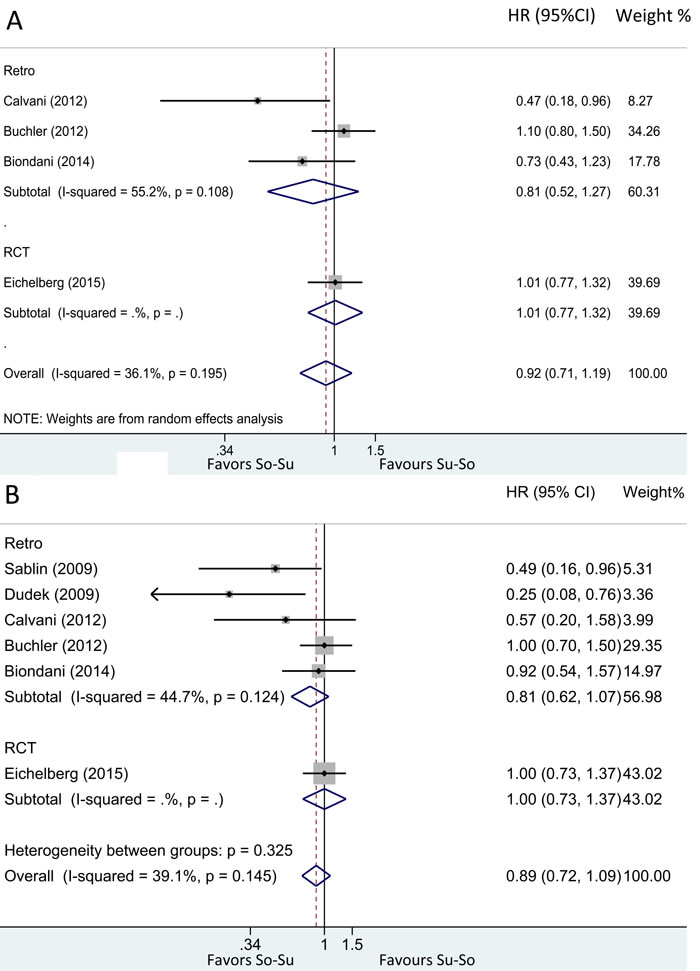 Figure 3: Hazard ratio for (A) PFS and (B) OS in overall population treated with So-Su over Su-So. 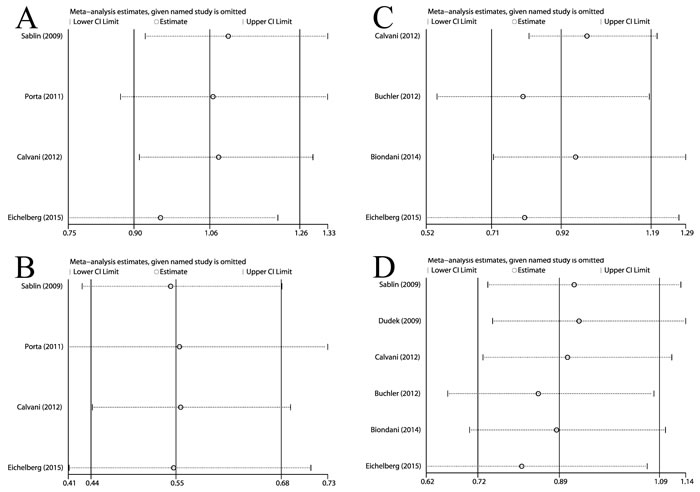 Table 3: The kinase inhibition profiles of Sorafenib and Sunitinib

In our present study, we investigated whether the therapeutic order of sorafenib and sunitinib in mRCC really mattered. We found that, compared with Su-So, So-Su offers no statistically significant benefit in PFS1, total PFS and OS. PFS2 was statistically longer for So-Su than Su-So. These data may lend support to that So-Su and Su-So provide similar overall clinical benefit in mRCC no matter how to order them.

The approval of targeted therapies as the first-line drug represented a milestone in the treatment landscape for mRCC in the last decade [19]. However, single targeted agent is transient owing to the progressive nature of the disease [20]. Therefore, how to order these agents in an optimal way after disease advanced has become the major focus of the RCC realm. Furthermore, although the NCCN (Version 2.2017) recommends cabozantinib, nivolumab, lenvatinib plus everolimus and Axitinib as a category 1 preferred subsequent therapy option [6], the sunitinib and sorafenib are still essential for mRCC in most of Asian countries, due to differences in approvals in different countries [21]. The optimal sequence has not been determined. There were several clinical trials evaluating sequential targeted therapy in mRCC. RECORD-3, a phase 2 randomized trial, have compared sequential everolimus-sunitinib to sunitinib-everolimus, and suggested that sunitinib-everolimus was a paradigm treatment at progression [22]. Besides, an international phase 3 trial has estimated temsirolimus versus sorafenib as second-line therapy after sunitinib in patients with mRCC [23]. It reported that temsirolimus did not show a benefit compared with sorafenib in PFS, but longer OS observed with sorafenib indicates sequencing sunitinib and sorafenib may benefit patients with mRCC. Consequently, to investigate the optimal sequence for the sorafenib and sunitinib in mRCC may be urgent and significant, at least in most of Asian countries.

Review of the literature, several retrospective and RCT researches have estimated the role of So-Su versus Su-So in patients with mRCC, but with divergent results. Five retrospective studies, which reported by Sablin, Dudek, Porta, Stenner and Calvani et al [8, 9, 11, 12, 18], suggested So-Su was superior to Su-So. However, Herrmann, Buchler, Alimohame, Biondani, Eichelberg et al [13-17] argued that So-Su and Su-So provide similar clinical benefit in mRCC, with no significant differences.

A pooled analysis of this topic was performed by Stenner et al [12] in 2012, but we can discover various drawbacks on it when weighing this article in mind. In that, median combined PFS was 12.1 months on Su-So to 15.4 months on So-Su (95%CI, 1.45-5.12, p = 0.0013) among 853 participants. No statistically difference in median PFS1 was noted (median PFS1 was on average 0.62 months longer on So-Su, 95%CI, -1.01 to 2.26, p = 0.43). PFS2 was significantly longer in So-Su than Su-So (average increase of 2.66 months, 95%CI, 1.01-4.3, p = 0.003). Drawbacks are as follows: First, study inclusion criteria were not clear and lack of a robust quality assessment. Second, there were no assessments of methodological quality, including the evaluation of statistical heterogeneity across the studies. Third, only a few studies were included and they had small sample sizes. Worse still, Dudek et al [9] calculated time to progression rather than progression-free survival, so that cannot be combined with overall PFS1 and PFS2. And they also included four prospective single-arm designed studies which not compared So-Su to Su-So in the analysis. Last but not least, the effect magnitude of this meta-analysis was mean differences in progression-free survival and 95%CI from commencement of both first- and second-line treatment, neither median survival ratio nor hazard ratio. OS was not included as an outcome of this review. All of these methodological flaws in the review made the reliability of this conclusion unclear.

Based on divergent results and defective former meta-analysis, we update this meta-analysis with four new eligible researches. Meanwhile, we estimated HR in more scientific outcomes: PFS1, PFS2, PFS and OS.

Notably, our finally result is consistent with randomized controlled trial SWITCH [13] and the largest retrospective study [14], not former meta-analysis, suggests no cross-resistance between Sorafenib and sunitinib, and both of them are available to mRCC, although with overlapping but not identical kinase inhibition profiles (Table 3). Moreover, one key challenge in this meta-analysis is to interpret the result of PFS2, which was statistically longer for So-Su than Su-So. The reasons for this difference are not clear. According to Eichelberg et al [13] reported more participants received second-line treatment in So-Su than Su-So (57% vs 42%; p < 0.01), which may be a reason. Patients receiving sorafenib in first-line are more likely to receive subsequent therapies than those receiving first-line sunitinib [10, 24]. Thus, the result for PFS2 should therefore be interpreted carefully.

The most frequently recording adverse events for sorafenib were diarrhea, hand-foot skin reaction. As for sunitinib, there were diarrhea, fatigue, hypertension, and nausea. All of them were consistent with previous records [25, 26]. Buchler et al [16] reported that overall adverse serious events for sorafenib and sunitinib were statistically lower if the agent was used as the second therapy (P = 0.031 for sunitinib and P < 0.001 for sorafenib). The rate of serious adverse events was significantly lower for So-Su than vice versa (P < 0.001). This indicates cross-tolerance and adaptation were existed between sorafenib and sunitinib probably.

Some limitations of this meta-analysis should be taken into consideration when interpreting the results. This is a meta-analysis based on several original studies rather than individual patient data, although we have tried our best to contact the authors. Second, this analysis is based on retrospective studies and potentially could exist selection and treatment bias due to the retrospective heterogeneous nature. Third, some studies only reported median PFS rather than HR and also cannot be estimated indirectly. Thus, these studies were not synthesized that carry potential publication bias. Forth, the funnel plot which can be used to assess potential publication bias was not performed, due to the small numbers of studies. Finally, subgroup analyses such for race, age, sex, Eastern Cooperative Oncology Group performance status, Memorial Sloan Kettering Cancer Center risk score and other baseline characteristics were not sub-group analyzed, because of the raw data limitation. Further meta-analysis based on individual patient data are expected to deal with this clinical heterogeneity problem.

Given the conclusions of this analysis, sequential therapy with sorafenib and sunitinib is well tolerated and efficient in mRCC. However, there are no evidence supported that sorafenib-sunitinib has the superiority to sunitinib-sorafenib in sequence. The ideal sequence of targeted agents requires further elucidation.

We systematically searched PubMed, Embase, Cochrane Library and ClinicalTrails.gov for relevant studies published between Jan 1, 2006 and Oct 13, 2016. There were no language constraints. Search text and Medical Subject Headings included sorafenib, sunitinib, and metastatic renal cell carcinoma. The complete search strategy used for PubMed was: ((“Carcinoma, Renal Cell”[Mesh] AND metastatic [Title/Abstract]) AND Sorafenib [Title/Abstract]) AND Sunitinib [Title/Abstract]. In addition, we also did a manual search using the reference lists of key literatures and the website of American Society of Clinical Oncology (ASCO).

Eligibility assessments of study tittles and abstracts were performed independently by two reviewers, and studies that potentially complied with predefined eligibility criteria were retrieved for full-text assessment. Finally, certified articles were extracted for further details as follow: the type of studies, follow-up duration, race, total number of participants, So-Su numbers, Su-So numbers, age, sex, clear-cell rate, PFS1, PFS2, combined PFS, OS and the number of participants with serious adverse events. Trials selection and data extraction were analyzed by two contributors with an agreement vale of 95.6%; disagreements between reviewers were resolved by a third expert. Meanwhile, two independent reviewers also assessed risk for bias according to the Newcastle-Ottawa Scale (NOS) [27]. The final NOS assessments were reported as a score between 0 and 9.

We performed this meta-analysis in four major outcomes: PFS1, PFS2, PFS and OS. We analyzed PFS1, PFS2, PFS and OS as time-to-event data; hazard ratio (HR) and 95% confidence intervals (95%CI) acquired directly or indirectly (in accordance with Tierney [28] reported methods) were used to compare results. When meta-analysis was not available, a qualitative synthesis may be done.

We calculated pooled estimates of the HR in PFS1, PFS2, PFS and OS between sequential therapy groups by using random- or fixed- effects model depending on the heterogeneity of the pooled studies. A fixed-effect model (inverse variance method) was applied when substantial heterogeneity not observed. Otherwise, random-effect model (DerSimonian-Laird method) was performed. Account for the differential of study design, we analyzed randomized controlled trials and retrospective studies separately.

Chi-squared Q statistics and I-square testing were used to assess heterogeneity between included trials. The moderate-to-high heterogeneity was considered when p values less than 0.1 and I2 values greater than 50%. We censored sensitivity by influence analysis, and omitting each study to find potential outliers. Microsoft Office Excel 2013 was used to data collecting. Statistical analysis was calculated by Stata (version 14.0).

This systematic review and meta-analysis is presented in consistent with the Preferred Reporting Items for Systematic Review and Meta-Analysis (PRISMA) Statement [29, 30] and was registered at International Prospective Register of Systematic Reviews (PROSPERO, CRD42016050037).