Concurrent neoadjuvant chemoradiotherapy could improve survival outcomes for patients with esophageal cancer: a meta-analysis based on random clinical trials

Background: The long-term survival benefit of concurrent neoadjuvant chemoradiotherapy in patients with resectable esophageal cancer remains controversial. In the present study, we conducted a meta-analysis to assess these effectiveness.

Methods: We searched for most relevant studies published up to the end of August 2016, using Pubmed and web of knowledge. And additional articles were identified from previous meta-analysis. The hazard ratio (HR, for overall survival and progression free survival) or risk ratio (RR, for R0 resection) with its corresponding 95 % confidence interval (CI) were used to assess the pooled effect.

Conclusion: Our findings suggested that concurrent neoadjuvant chemoradiotherapy was associated with a significant survival benefit in patients with esophageal cancer.

With more than 456,000 newly diagnosed cases and 400,000 related deaths annually, esophageal cancer is the tenth most common cancer and the eighth leading cause of cancer-related deaths worldwide. [1, 2] Since most esophageal cancer patients are diagnosed at the advanced stages, the 5-year survival rate is less than 20%. [3] Despite surgical care and improvements in preoperative staging, surgery alone leads to relatively few long-term survivors. [4] A great number of patients who underwent esophagectomy continue to die as a result of tumor recurrence. [5]

Adjuvant therapies, with either radiotherapy or chemotherapy, have not shown survival any benefits. [5] This, along with the evident difficulties of administering radiotherapy and chemotherapy after resection for esophageal cancer, makes recent trials focus on the role of neoadjuvant treatment, especially the concurrent neoadjuvant chemoradiotherapy (NCRT). A recent meta-analysis showed that concurrent NCRT was associated with improved 1-, 3- and 5-year survival rate. [6] However, the outcomes of their study are pooled risk ratio (RR), which did not consider the survival time, Moreover, analysis for R0 resection and progression-free survival were not conducted.

Several Randomized clinical trials (RCTs) have investigated the effect of concurrent NCRT on operable esophageal cancer. However, these results are controversial. A meta-analysis pooling current literatures might be helpful for confirming such effect. Therefore, the aim of the current study was to determine whether concurrent NCRT plus surgery is superior to surgery alone for operable esophageal cancer.

Table 1: Chemoradiotherapy regimens in randomized trials included in the meta-analysis 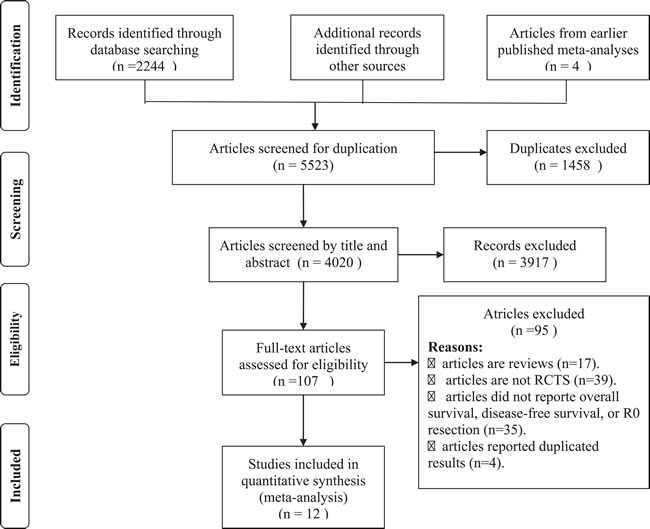 Figure 1: The flow diagram of screened, excluded, and analyzed publications 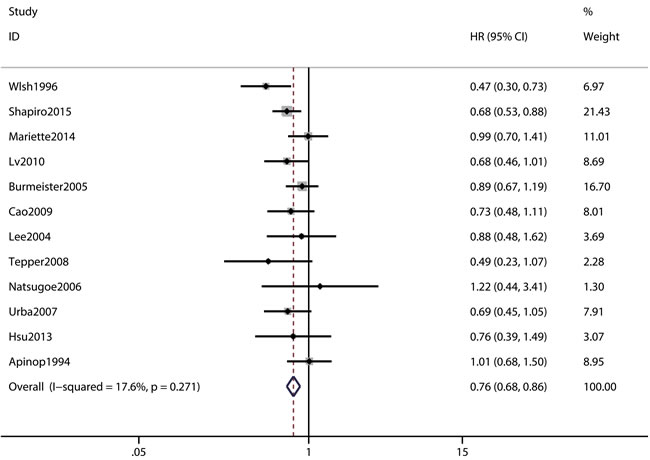 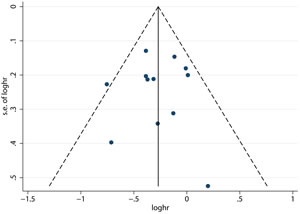 Several potential explanations exist for the improved effects of concurrent NCRT. First, chemotherapy has a radio sensitizing effect, which can enhance the local effects of concurrent radiotherapy, reducing the possibility of tumor spreading from the primary tumor site prior to surgery. Second, concurrent chemoradiotherapy may have the ability to inhibit the proliferation of tumor cells in the primary lesion site, decreasing the length of preoperative treatment required.

Our subgroup analysis also demonstrated that concurrent NCRT plus surgery significantly improved overall survival outcome for patients in the west. Whereas in the east, concurrent NCRT plus surgery was only associated with improved overall outcome with a borderline significant. It might be ascribed the different genetic backgrounds and/or ethnicities of the participants, which should be further investigated with well-designed multicenter RCTs from different ethnics. Moreover, in order to verify the effect of concurrent NCRT, subgroup analysis based on histology was also introduced. Through this subgroup analysis, we found that concurrent NCRT plus surgery improved the overall survival outcome for SCC patients, but not for AC patients or AC+SCC patients. Several explanations may partly explain the reasons. Firstly, participants with SCC may gain more benefits from concurrent NCRT plus surgery than those with AC. Secondly, SCC patients have a greater potential to involve the superior mediastinum and cervical region than AC patients, which is more difficult for aggressive intrathoracic and cervical nodal dissection to be carried out. Besides, SCC is more sensitive to radiotherapy and chemotherapy than AC. [6] Thus, the addition of chemoradiotherapy to the treatment regime might have improved therapeutic outcome.

Although subgroup analysis based on postoperative complications failed to be conducted, the included studies showed that treatment-related complications in the NCRT group had no significant difference from that of the surgery alone group [13, 17]. In addition, loss to follow-up was low (ranging from 0.4% to 4.2%), thus the result from our study is robust.

Several potential limitations of our meta-analysis should also be acknowledged. At first, since most studies included patients without clear identification of tumor-node-metastasis (TNM) classification, the subgroup based on TNM classification could not be achieved. In addition, as the primary endpoint was overall survival, the difference of complications between NRCT plus surgery group and surgery alone group was not clear.

In conclusion, concurrent NCRT improves overall survival, progression-free survival and R0 resection rate in patients with esophageal cancer. This improvement is statistically significant and clinically relevant for SCC but not for AC subtypes. Concurrent NCRT followed by surgery should be viewed as a standard care for patients with resectable esophageal squamous cell carcinoma. Further well-designed multicenter RCTs are warranted to verify the beneficial effect.

A comprehensive literature search of Pubmed, and Web of Knowledge was conducted up to the end of August 2016. The following search formula were used: (([esophageal ] OR [oesophageal] OR [esophagus] OR [oesophagus]) AND ([neoplasms] OR [cancer] OR [carcinoma]) AND ([chemotherapy] OR [radiotherapy] OR [chemoradiotherapy] OR [combined modality therapy] OR [adjuvant]) AND [neoadjuvant]). The searches were limited to articles describing RCTS and published in English. In order to identify further additional studies, manual searching of reference lists was performed.

Articles included should fit all the following criteria: (1) Studies were designed as RCTs; (2) compared concurrent NCRT with surgery alone were considered; (3) the outcome of interest was defined as overall survival, progression-free survival, or R0 resection rate; and (4) the sample size, hazard ratio (HR) and their 95 % confidence interval (CI), or data that would allow those findings to be inferred, was presented. If several publications reporting on the same population data met our criteria, the one with the longest follow-up period was selected.

The primary outcome was overall survival. The secondary outcomes were progression-free survival and R0 resection rate, which was defined by a tumor-free resection margin. Two authors (Baoxing Liu and Yacong Bo) independently extracted the following data from each eligible study, and discrepancies were resolved by a third investigator: first author, year of publication, number of patients randomized, and those who received chemoradiotherapy or surgery, HR for overall survival and progression-free survival, the total number of participants for each study, and the number of patients for R0 resection.

The meta-analysis was performed using STATA software (version 12.0; StatCorp, College Station, TX, USA) and P < 0.05 was considered as statistically significant. Overall survival and progression-free survival were measured with a hazard ratio (HR), while the R0 resection rate was measured using risk ratios (RR). If permitted, HR and the 95% confidence interval (CI) were obtained directly from the article; otherwise, they were calculated using the methods of Parmar, [20] Tierney, [21] and Williamson, [22] which use number of events and Kaplan-Meier survival curves to estimate the HR and 95% CI. The chi-square test and I2 test were used to assess heterogeneity, with P < 0.05 and/or I2 > 50% representing significant heterogeneity, and the random-effect model was selected. Otherwise, a fixed-effect model was applied [23]. Subgroup analyses were applied to evaluate potential effect modification of variables including geographic locations, and histological type (SCC and AC). Begger’s Funnel plots and Egger’s tests were performed to assess the publication bias [24, 25].

2. Loomis D, Huang W and Chen G. The International Agency for Research on Cancer (IARC) evaluation of the carcinogenicity of outdoor air pollution: focus on China. Chinese Journal of Cancer. 2014; 33:189-196.