Histone deacetylase (HDAC) triggers the suppression of transcription by removal of acetyl groups from lysine amino acid on histones [1]. Many studies have been demonstrated that the expression of HDAC is upregulated in many human cancers [2–4]. Therefore, diverse HDAC inhibitors are being studied in various cancers [5–7]. Suberoylanilide hydroxamic acid (SAHA) is the first HDAC inhibitor approved by U.S. Food and Drug Administration for the treatment of cutaneous T-cell lymphoma. It also has been clinically tested in lung and gastrointestinal cancers [8–10]. Numerous evidences indicate that SAHA induces apoptosis and inhibits metastasis in various cancer cells [11, 12].

The tumor necrosis factor (TNF) family is composed of 19 ligands and 29 receptors. It can modulate inflammation, proliferation and apoptosis in the cells [13–16]. There are three major cytokines in TNF family, TNF-α, TNF-related apoptosis-inducing ligand (TRAIL) and Fas ligand (FasL). TNF-α can bind two receptors, TNF receptor 1 (TNFR1) and TNF receptor 2 (TNFR2). When TNF-α binds to TNFR1, it induces caspase-8 activation and then finally causes apoptosis [17]. TNF-α also activates NF-κB pathway and AP-1 signaling via binding to TNFR2 [18]. TRAIL and FasL also lead to apoptosis mediated by their receptors [19]. TNF family cytokines can be a novel molecule because they sensitize cancer cells to the anti-cancer effect of HDAC inhibitor via induction of death receptor [20].

Lung cancer is the most common cancer and major cause of cancer death in the worldwide. The main types are small cell lung cancer (SCLC) and non-small cell lung cancer (NSLC). There are three subtypes of NSCLC, adenocarcinoma, squamous cell carcinoma and large cell carcinoma. The major cause of lung cancer are tobacco smoke and this environmental factor could increase the possibility of histone modification in lung cells [21]. Although SAHA has been tested clinically in lung cancer [8, 22], little is known about whether SAHA is a proper anti-cancer drug in lung cancer. Therefore, in this study, we investigated the effect of SAHA on HDAC activity and cell death, and suggested a promising combination strategy using TNF-α to improve anti-cancer effect of SAHA in lung cancer cells. 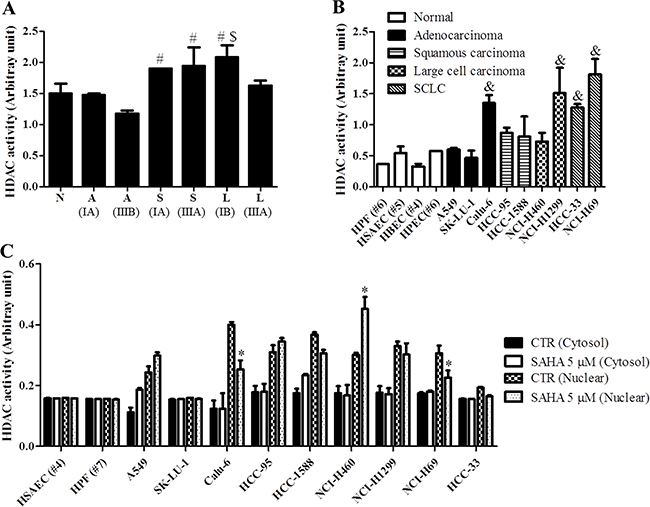 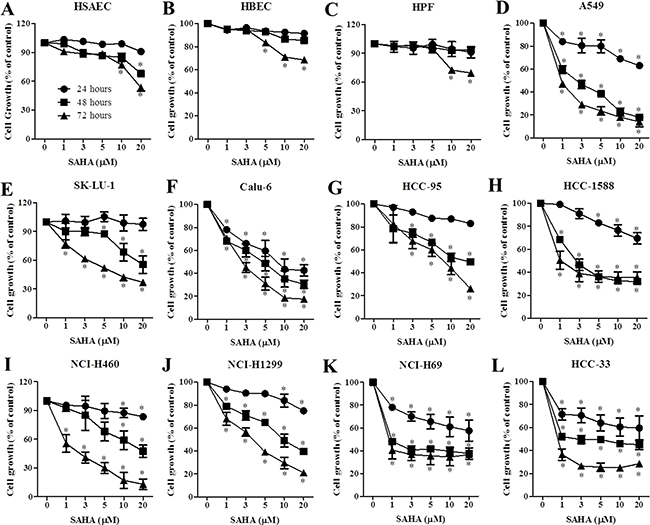 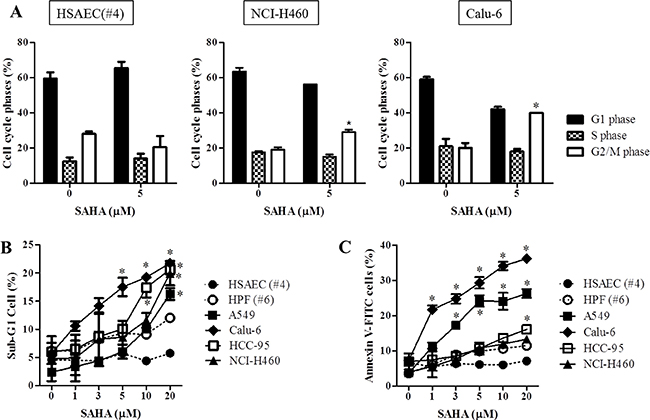 Figure 3: Effects of SAHA on cell cycle and cell death in normal lung and cancer cells. Exponentially growing cells were treated with indicated concentrations of SAHA for 24 hours. (A) Graphs show the cell cycle distributions in HSAEC (#4), NCI-H460 and Calu-6 cells. (B) and (C) Graphs show the percent of sub-G1 (B) and annexin V-FITC positive cells (C). *p < 0.05 compared with SAHA-untreated control group. 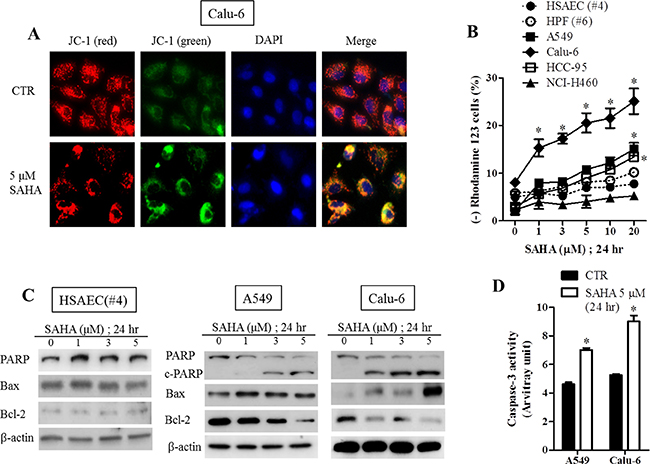 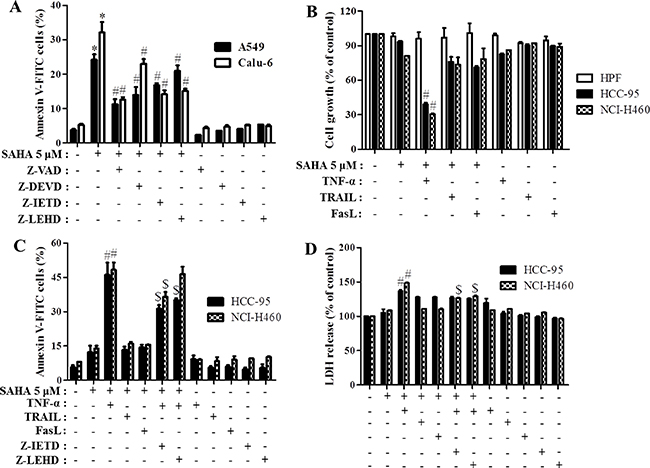 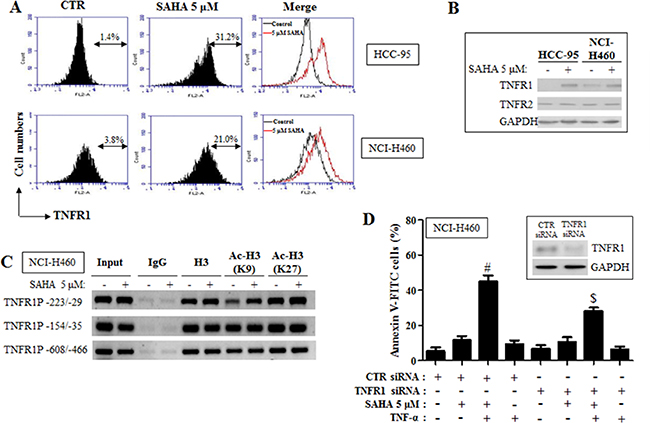 TNF-family contains 19 ligands and 29 receptors in human [36]. TNF family ligands and receptors play an important role in numerous biological processes including apoptosis and inflammation [36]. There are three main cytokines, TNF-α, TRAIL and FasL. When TNF-α binds to TNFR1, it induces caspase-8 activation and then finally causes apoptosis [17]. TNF-α also activates NF-κB pathway and AP-1 signaling for cell proliferation via binding to TNFR2 [18]. TRAIL and FasL also affect apoptosis mediated by their receptors [19]. Some reports demonstrate that HDAC inhibitor and TRAIL co-treatment sensitizes cancer cells to cell death [20, 37]. In this study, only TNF-α synergistically intensified cell death in SAHA-treated lung cancer cells. Especially, TNF-α sensitized HCC-95 and NCI-H460 cells to cell death. Co-treatment with SAHA and TNF-α led to not only necrosis but also apoptosis, which was induced by activations of caspase-8 and caspase-9. Since necrosis inhibitors, NecroX-2 and Necrostatin-1 did not alter cell death, it seemed that apoptosis is major mechanism for the suppression of cell growth in TNF-α and SAHA-treated lung cancer cells.

HDAC inhibitor can affect the level of TNF-family receptors. It has been reported that HDAC inhibitor downregulates TNFR1 in leukemia and lung cancer cells [38, 39]. It was also observed that SAHA decreased the level of TNFR1 in Calu-6 cells (Supplementary Figure 4A and 4B). However, our study showed that SAHA upregulated the expression level of TNFR1 in A549, HCC-95 and NCI-H460 cells. Furthermore, acetylation of the region of TNFR1 promoter -223/-29 was increased in SAHA-treated NCI-H460 cells. This data indicates that SAHA regulates the transcription of TNFR1 in NCI-H460 cells. Administration of TNFR1 siRNA recovered apoptotic cell death in TNF-α and SAHA-treated lung cancer cells. This result suggests that up-regulation of TNFR1 by SAHA enhances the sensitivity of TNF-α to lung cancer cells. Therefore, this result demonstrates that TNF-α can be a noble combination agent for HDAC inhibitor-based cancer therapy.

In conclusion, SAHA inhibited the growth of lung cancer cells via a G2/M phase arrest and caspase-dependent apoptosis regardless of the inhibitory effect on HDAC. SAHA also enhanced apoptotic effect of TNF-α in human lung cancer cells through up-regulation of TNFR1 (Figure 7). These results suggest that TNF-α may be a key to improve the anti-cancer effect of HDAC inhibitors in lung cancer. 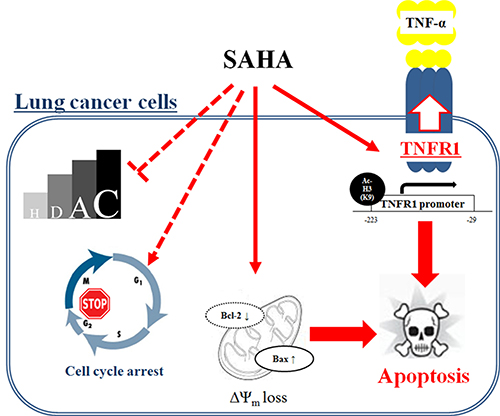 The HDAC activity was measured by using the HDAC assay kit, according to manufacturer’s instructions (Millipore, Billerica, MA). Briefly, 1 × 106 cells in 60 mm culture dish (BD Falcon) were incubated with or without 5 μM SAHA for 24 hours. Then cells were washed with PBS and added in 4 volumes of lysis buffer (R&D systems, Inc.). Thirty μg of total protein were used to measure the HDAC activity. These were added to each well in 96-well microtiter plates (SPL Life Sciences, Pocheon, Gyeonggi-do, Korea) with HDAC substrate provided from the kit at 37°C for 1 hour. The optical density of each well was measured at 405 nm by using a microplate reader (SynergyTM 2, BioTekR Instruments Inc., Winooski, VT).

The effect of SAHA on growth inhibition in normal lung and cancer cells was determined by the 3-(4,5-dimethylthiazol-2-yl)-2,5-diphenyltetrazolium bromide (MTT, Sigma-Aldrich Co.) assay. Briefly, 5 × 103 cells in 96-well microtiter plate (SPL Life Sciences) were incubated with the indicated concentrations of SAHA with or without TNF-α, TRAIL or FasL for indicated times. Then twenty microliter of MTT solution [2 mg/mL in phosphate-buffered saline (PBS)] was added to each well in 96-well plates. The plates were incubated for 4 hours at 37°C. Medium in plates was removed by pipetting, and 200 μl DMSO was added to each well to solubilize the formazan crystals. The optical density was measured at 570 nm using a microplate reader (SynergyTM 2, BioTekR Instruments Inc.).

Apoptosis was detected by staining cells with annexin V-fluorescein isothiocyanate (FITC, Life Technologies, Carlsbad, CA ; Ex/Em = 488 nm/519 nm). Briefly, 1 × 106 cells in 60 mm culture dish (BD Falcon) were incubated with the indicated concentrations of SAHA with or without each caspase inhibitor, TNF-α, TRAIL or FasL for 24 hours. Then cells were washed twice with cold PBS and added 500 μl of binding buffer (10 mM HEPES/NaOH pH 7.4, 140 mM NaCl, 2.5 mM CaCl2) at a concentration of 1 × 106 cells/ml. Five microliters of annexin V-FITC and PI were added to these cells, which were analyzed with an Accuri C6 flow cytometer (BD Sciences).

The caspase-3 activity was assessed by using the caspase-3 colorimetric assay kit (R&D systems, Inc.) Briefly, 1 × 106 cells in 60 mm culture dish (BD Falcon) were incubated with 5 μM SAHA for 24 hours. Then cells were washed with PBS and added in 4 volumes of lysis buffer (R&D systems, Inc.). Fifty μg of total protein were used to measure the caspase-3 activity. These were added to each well in 96-well microtiter plates (SPL Life Sciences) with DEVD-pNA as a caspase-3 substrate. The plates were incubated for 1 hour at 37°C. The optical density of each well was measured at 405 nm by using a microplate reader (SynergyTM 2).

Necrosis in cells treated with SAHA and/or TNF family cytokines was evaluated by LDH kit (Sigma-Aldrich Co.) Briefly, 1 × 106 cells in 60 mm culture dish (BD Falcon) were incubated with the indicated concentrations of SAHA with or without TNF family cytokines for 24 hours. After treatment, the cell culture media were collected and centrifuged for 5 min at 1500 rpm. Fifty μl of the media supernatant was added to a 96 well plate along with LDH assay reagent and then incubated at room temperature for 30 min. The absorbance values were measured at 490 nm using a microplate reader (SynergyTM 2). LDH release was expressed as the percentage of extracellular LDH activity compared with the control cells.

Surface expression of TNFR1 was detected by PE conjugated TNFR1 antibody (Santa Cruz Biotechnology). PE conjugated Armenian hamster IgG (Santa Cruz Biotechnology) was used as an isotype control. Briefly, 5 × 104 cells in 12 well culture plate (BD Falcon) were incubated with the indicated 5 μM SAHA for 24 hours. Then cells were washed twice with cold PBS and added 500 μl of PBS at a concentration of 1 × 106 cells/ml. Ten microliters of PE conjugated TNFR1 antibodies or five microliters of PE conjugated Armentian hamster IgG were added to these cells, which were analyzed with an Accuri C6 flow cytometer (BD Sciences).

Transfection of cells with TNFR1 siRNA

Gene silencing of TNFR1 was performed by using siRNA. A nonspecific control (CTR) siRNA duplex [5′-CCUACGCCACCAAUUUCGU(dTdT)-3′] and TNFR1 siRNA duplex [5′-CCUGGACAAGCACAUAGCA(dTdT)-3′] were purchased from the Bioneer Corp. (Daejeon, South Korea). In brief, 2.5 × 105 cells in six-well plates (Nunc) were incubated in RPMI-1640 supplemented with 10% FBS. The next day, cells (approximately 30–40% confluence) in each well were transfected with the CTR or TNFR1 siRNA duplex [80 pmol in Opti-MEM (GIBCO BRL)] using LipofectAMINE 2000 (Invitrogen, Brandford, CT). One day later, cells were treated with or without 5 μM SAHA and 10 ng/ml TNF-α for additional 24 hours. The transfected cells were used for Western blot analysis and annexin V-FITC staining measurements.