In this study, we examined the expression of core proteins of the Hippo signaling pathway in hepatocellular carcinoma (HCC) cells treated with transforming growth factor-β 1(TGF-β1) and investigated the relationship between TGF-β1 and the Hippo signaling pathway, in order to better understand their roles in HCC and their potential implications for cancer therapy. We prove that the Hippo signaling pathway is involved in the TGF-β1-induced inhibition of the growth of HCC cells. Large tumor suppressor expression (LATS1) was overexpression and yes association protein 1(YAP1) translocated from the nucleus to the cytoplasm in HCC cells treated with TGF-β1. Overexpression of LATS1 and the nucleocytoplasmic translocation of YAP1 play an anti-oncogenetic role in the occurrence and development of liver cancer. Our findings provide new insight into strategies for liver cancer therapy.

Hepatocellular carcinoma (HCC) is one of the most common malignancies and the second leading cause of cancer-related death in China [1]. Despite the new advances in cancer diagnosis and treatment, surgical reaction and liver transplantation are still the best options for treating HCC [2]. However, HCC is associated with poor prognosis and a high recurrence rate, and the underlying molecular mechanisms are still unknown. Therefore, improving our understanding of the underlying molecular mechanisms is critical for the establishment of therapeutic strategies and effective metastasis-targeted therapy.

Transforming growth factor-β1 (TGF-β1) is a multifunctional polypeptide cytokine that plays a role in inflammation, it is produced by macrophages, stromal cells and tumor cells [3-5]. Under hypoxic and inflammatory conditions, TGF-β1 plays a role in tumor progression by regulating a wide variety of cellular processes, such as cell proliferation, differentiation, migration, and apoptosis [6]. Recent evidence has demonstrated that TGF-β1 is a major tumor suppressor in premalignant cells, while in the late stages of cancer progression, TGF-β1 induces epithelial-mesenchymal transition (EMT) and leads to increased metastasis of cancer cells [7-9]. Because of the critical role of TGF-β1 in the process of metastasis, antagonists that target TGF-β1 signaling have been developed in cancer therapeutics [10]. However, clinical efficacy of TGF-β1-targeting drugs in cancer therapy has been limited. Considering the conflicting functions of TGF-β1 in cancer development, it is not surprising that general inhibition of TGF-β1 expression may accelerate the progression of preneoplastic lesions, in which TGF-β1 still acts as a tumor suppressor. Thus, it is essential to elucidate the changes of TGF-β1 during the process of cancer development and metastasis.

The Hippo signaling is a highly conserved tumor suppressor pathway that plays a key role in the regulation of organ size and cell proliferation and apoptosis [11, 12]. The core components of this pathway are MST1/2 (mammalian sterile-20 like 1 and 2), LATS1/2 (large tumor suppressor 1 and 2) and YAP (yes association protein) [13]. YAP is a candidate oncogene in many human cancers, when the Hippo signaling pathway is activated, YAP is phosphorylated by LATS1/2, and then restricted to the cytoplasm or degraded [14]. Recent studies have shown that YAP1 interacts with Smad to regulate cellular responses induced by TGF-β1 in stem cells [15]; however, Nallet-Staub et al. insist that cell–cell contact-driven activation of the Hippo pathway is ubiquitous and does not interfere with TGF-β1 signaling [16]. Therefore, it is not clear what roles of the Hippo signaling pathway and the TGF-β1 they play in the development and progression of HCC, as the findings reported so far are contradictory.

In this study, we examined the expressions of LATS1 and YAP1 in HCC cells treated with TGF-β1, and found that TGF-β1 inhibited the growth of HCC cells by activating the Hippo signaling pathway.

In order to investigate the biological role of TGF-β1 in HCC, we assessed the effects of TGF-β1 on the viability of SMMC-7721, Bel-7402, HepG2 and QGY-7703 cells. The results obtained from the CCK-8 assay confirmed that the growth of SMMC-7721, Bel-7402, HepG2 and QGY-7703 cells was clearly inhibited by TGF-β1 (Figure 1A). And colony formation showed that TGF-β1 treated cells formed fewer colonies compared with those cells without TGF-β1 (Figure 1B). 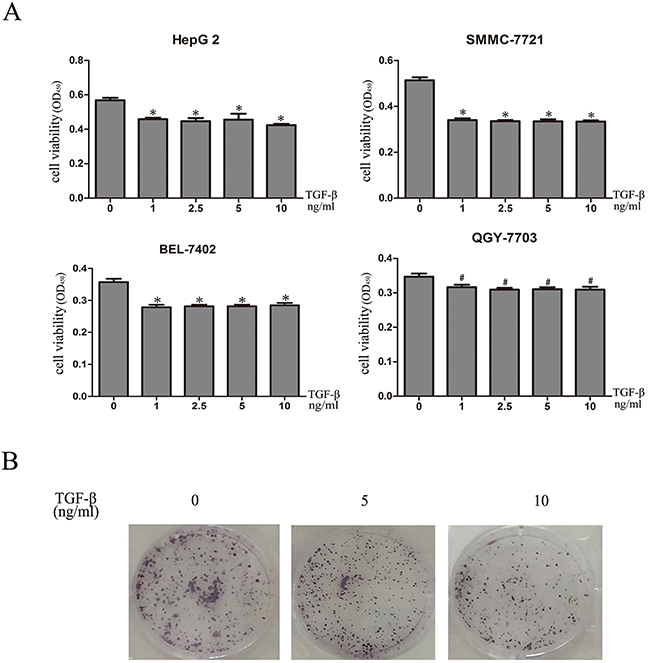 We then performed apoptosis assays in HCC cells after 48 hours treated with 5ng/mL or 10ng/mL TGF-β1. Apoptosis assays showed that cell apoptosis rates had no clearly change compared with control cells (P > 0.05; Figure 2A). We then performed Western blotting to measure Bcl-2 and Bax protein expression levels, while Bcl-2 and Bax demonstrated no significant differences in expression (Figure 2B). These results indicate that TGF-β1 suppresses the HCC cells proliferative capacity but does not promote apoptosis. 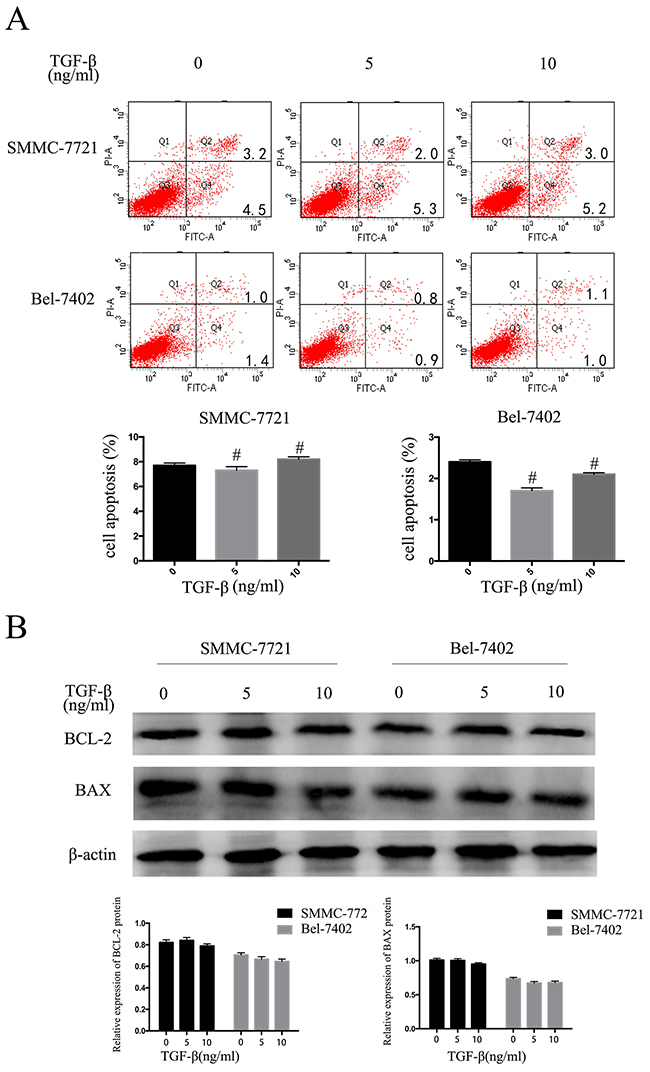 Figure 2: TGF-β1 suppresses the HCC cells proliferative capacity but does not promote apoptosis. SMMC-7721 and BEL-7402 cells were treated with 0, 5ng/mL and 10ng/mL TGF-β1 for 48 hours. A. apoptosis B. western blotting examined the expression levels of Bcl-2 and Bax. Data are expressed as the mean ± SEM of three independent experiments, #P>0.05. 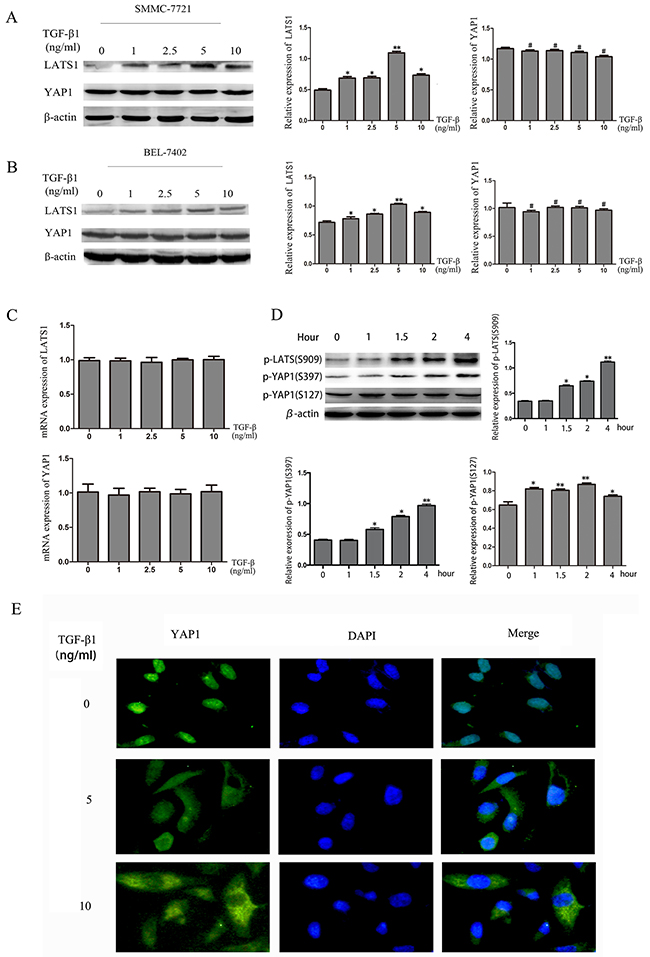 To further confirm the hypothesis that TGF-β1 inhibits the growth of HCC cells by regulating the Hippo signaling pathway, we transfected HCC cells with LATS1 siRNA and LATS1. At 48 hours after transfection, real-time PCR and western blotting were performed to measure the LATS1 levels in order to evaluate transfection efficiency. (Figure 4A, 4B). And then the cells were treated with TGF-β1 for 48 hours, as shown in Figure 4C, LATS1 special siRNA significantly inhibited YAP1 phosphorylation level and increased YAP1 expression at the protein levels, whereas overexpression of LATS1 inhibited the expression levels of YAP1 protein and increased YAP1 phosphorylation level in SMMC-7721 cells. Besides, LATS1 special siRNA increased YAP1 nuclear translocation compared with those cells overexpression of LATS1 (Figure 4D). Furthermore, inactivation of the Hippo signaling pathway abolished the TGF-β1-induced inhibition of HCC cells (Figure 4E). 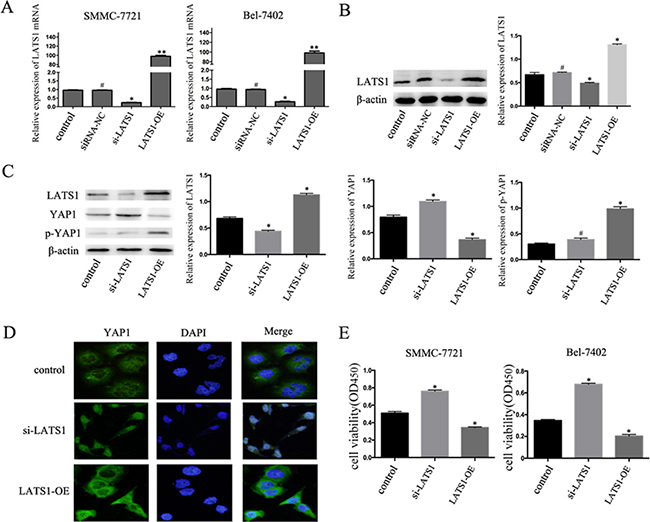 Figure 4: TGF-β1 inhibits the growth of HCC cells by regulating the Hippo signaling pathway. A, B. The mRNA and protein expression of LATS1 in SMMC-7721 and BEL-7402 cells after transfected by LATS1 siRNA (si-LATS1) or LATS1 overexpressing (LATS1-OE). C. Western blotting examined the expression levels of LATS1, YAP1 and p-YAP1 protein in si-LATS1, LATS1-OE, and control transfected in SMMC-7721 cells treated with 5ng/mL TGF-β1 for 48 hours. D. immunofluorescent staining of YAP1 E. Cell viability was determined by CCK-8 assay. Data are expressed as the mean ± SEM of three independent experiments, *P<0.05.

In order to illuminate the relationship between Hippo and Smads signaling, we then checked the expression of p-Smad2/3 treated with TGF-β1. The results of western blotting showed that expression of p-Smad2/3 was incresed in a time-dependent manner when treated with TGF-β1 (Supplementary Figure 1A). Besides that, TGF-β1 also induced Smad2/3 translocation from the cytoplasm nucleus to the nucleus (Supplementary Figure 1B). We then use the siRNA to konck down the Smad2/3 expression (Supplementary Figure 1C), cck8 showed that the growth of HCC cells was inhibitied more significantly (Supplementary Figure 1D), it indicated that TGF-β1/smad2/3 promoted the HCC cells growth, while the Hippo pathway inhibited the HCC cells growth and the inhibiton effect was stronger than the promotion effect of TGF-beita/smad2/3. Our data indicate that activation of the Hippo signaling pathway is essential for TGF-β1-induced inhibition of the growth of HCC cells. 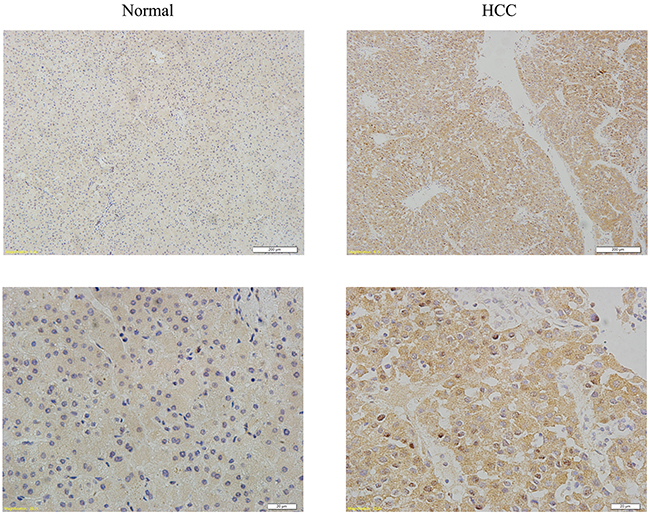 TGF-β1 has multiple functions in tumors [19-22]. On the one hand, it induces EMT in tumor cells, while on the other hand, it can suppress the invasion and metastasis of cancer cells. Our results showed that TGF-β1 inhibited the growth of HCC cells just by suppressing the HCC cells proliferative capacity. We also examined the expression of Bcl-2 and Bax, which are important targets in the apoptosis process; however, no significant difference was observed in the protein levels of these two proteins. These findings indicate that TGF-β1 could suppress the growth of HCC cells but does not promote cells apoptosis.

In conclusion, our findings prove that the Hippo signaling pathway is involved in the TGF-β1-induced inhibition of the growth of HCC cells. TGF-β1 inhibited the growth of HCC cells just by suppressing the HCC cells proliferative capacity, instead of promoting HCC cells apoptosis. TGF-β1 increased LATS1 expression and induced the translocation of YAP1 from the nucleus to the cytoplasm. Overexpression of LATS1 and the nucleocytoplasmic translocation of YAP1 play an anti-oncogenetic role in the occurrence and development of liver cancer. Our findings provide new insight into strategies for liver cancer therapy.

Used CCK-8 kit (Solarbio, Beijing, China) to evaluated the HCC cells proliferation. HCC cells (1.5 × 103 per well) seeded in 96-well plates were incubated with TGF-β1 for 48 h. About 10 μl of CCK-8 solution was added to each well, and the 96-well plate was incubated at 37°C for 2 h. Then used a multi-label plate reader to measure absorbance at 450 nm (Bio-Rad, Hercules, California USA).

Cells were seeded into 6-well plate at a density of 5 × 102 cells per well and cultured for another fortnight. The colonies were stained with crystal violet and counted under a microscope. All the experiments were performed in triplicate.

The cell apoptosis was determined by flow cytometer analysis. Cells (2 × 105/well) were seeded in 6-well plate and treated with TGF-β1 for 48 hours and the apoptotic cells were quantified by a FITC-labelled AnnexinV/PI Apoptosis Detection Kit (Invitrogen). All the experiments were performed in triplicate.

Human recombinant TGF-β1 was purchased from Sigma. Cells were cultured and placed in 6-well plates; they were then washed with PBS and fixed in 4% polyformaldehyde. Following this, the primary antibody YAP1 (1:100) or Smad2/3 (1:100) was added, and the plates were incubated at 4°C overnight. After washing, the fluorescent secondary antibody FITC-labeled secondary antibody (Bioss, BeiJing, China) was added and incubated for 2 h. And then, the cells were counter-stained with DAPI (Bioss, BeiJing, China) and visualized under a confocal microscope.

The data analyses were conducted using SPSS17.0 (SPSS Inc., Chicago, IL). Data are presented as the mean ± SD, and statistical analyses were performed using the Student t-test or analysis of variance. P-values < 0.05 were considered to indicate statistical significance.