Transformation to small-cell carcinoma as an acquired resistance mechanism to AZD9291: A case report

A 52-year-old non-smoker female was first detected a 2 cm mass in right upper lobe of lung with computed tomography (CT) scan in May, 2014. She then underwent right upper lobectomy with regional lymph node dissection. The pathology diagnosis was adenocarcinoma with multiple metastasized lymph nodes in group 2 (9/9), group 4 (4/4), group 7 (7/7), group 9 (0/1) and group 10 (6/6) (Figure 1). EGFR exon19 deletion was detected by amplification refractory mutation system (ARMS). The patient was diagnosed as adenocarcinoma in right upper lobe, staged T2N2M0 (IIIA). She received adjuvant chemotherapy with gemcitabine plus cisplatin. However, multiple micronodules were found in bilateral lung after finishing two cycles of chemotherapy. Then she started treatment on erlotinib from Sep, 2014 and achieved partial response in one month. Regular CT examination was underwent every two months, and new bilateral lung lesions were found in Aug, 2015, after 11 months treatment of erlotinib. Because of the difficulty of re-biopsy, plasma circulating tumor DNA (ctDNA) was collected for EGFR mutation detection by ARMs. However, neither exon19 deletion nor T790M mutation was detected. The patient was given chemotherapy with pemetrexed plus nedaplatin. But disease progressed after two cycles. Then docetaxol plus bevacizumab was given but disease progressed again. Meanwhile, she had symptoms of cough and shortness of breath. Then she was on AZD9291 in Dec, 2015 after chemotherapy failure. The patient’s symptoms improved dramatically in one month and CT scan showed disease improved obviously (Figure 2). She continued on treatment of AZD9291 until multiple hepatic lesions appeared in May, 2016 (Figure 3), while the lesions of lung were still stable. Liver biopsy was performed and histologic analysis showed as small cell lung cancer. Immunohistochemistry staining confirmed as strong positive for synaptophysin (Figure 4). ARMs analysis showed EGFR exon19 deletion, without T790M mutation. Because there were not sufficient tissue left for next generation sequencing assay (NGS) test, peripheral ctDNA was tested and detected mutations of EGFR exon19 deletion, P53 exon6 V203L-pTEN exon4 NC82 and PIK3CA exon10 E545Q. The level of the patient’s neuronspecificenolase (NSE) was 113.8 ng/ml, which was 13 ng/ml in Dec, 2015 before treatment of AZD9291. Then the patient was treated on etopside and carboplatin in addition to AZD9291. Her NSE level decreased from 113.8 ng/ml to 28 ng/ml after one cycle of chemotherapy and then to 10 ng/ml after the second cycle. The CT examination after two cycles of chemotherapy showed smaller hepatic lesions but did not reach partial response. Now the patient was on further treatment and followed up. 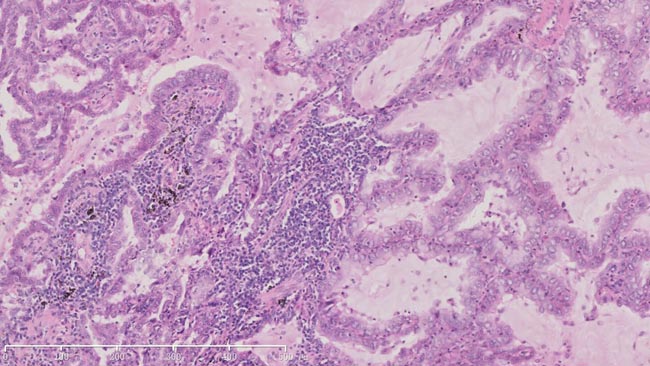 Figure 1: HE staining of surgical sample of lung showed histopathology of adenocarcinoma (X100). 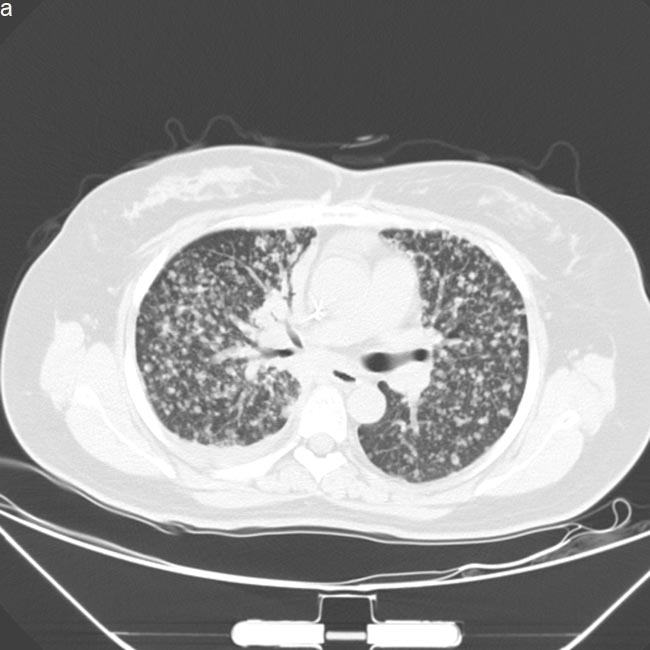 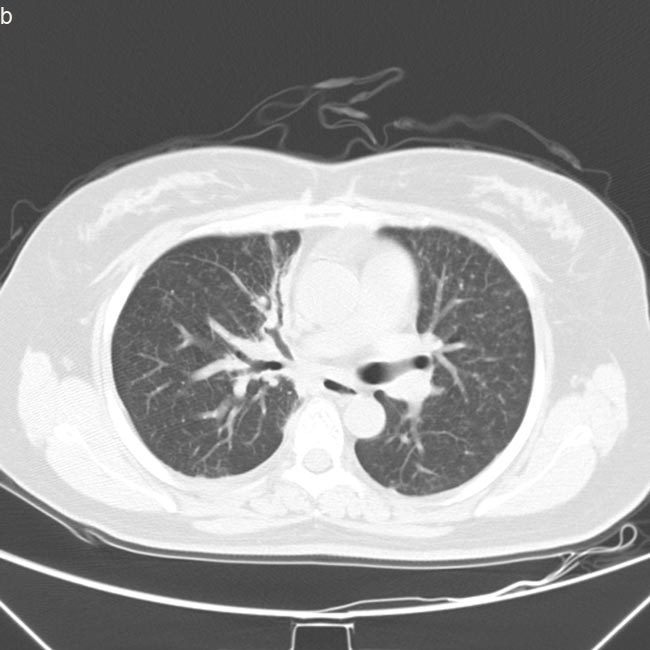 Figure 2: Computed tomography scan images of lung prior and post-AZD9291 treatment. a. Disease progressed in Dec,2015 after treatment of erlotinib and chemotherapy, prior-AZD9291. Patient had symptoms of cough and short of breath. b. Partial response after one month of AZD9291 treatment. Symptoms were much relieved. 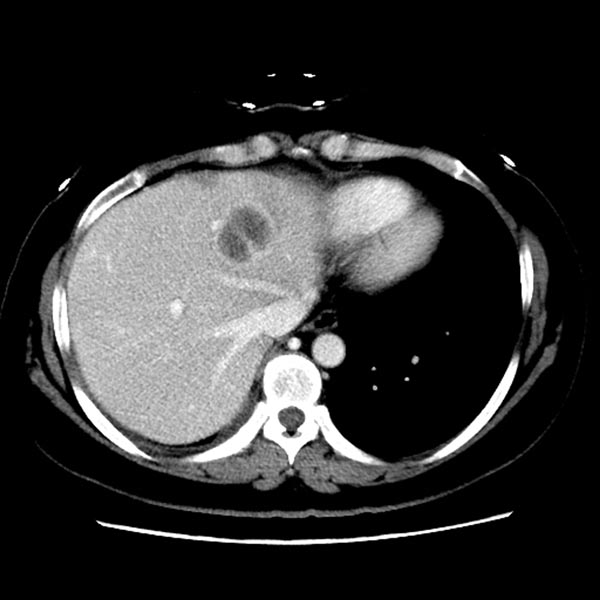 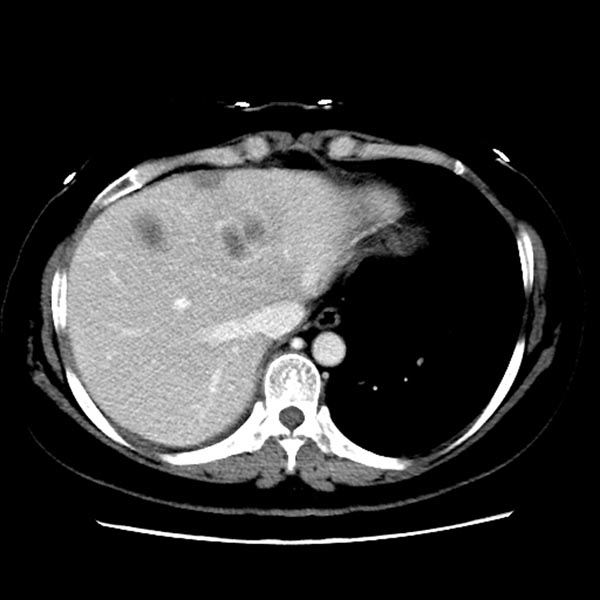 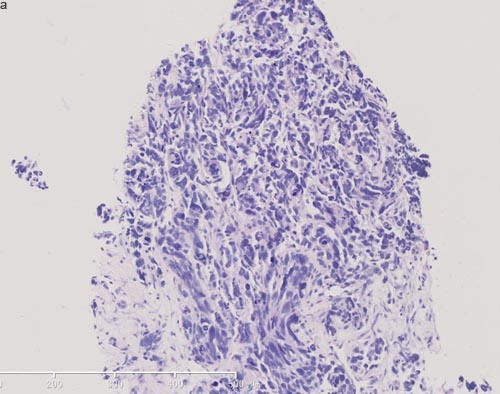 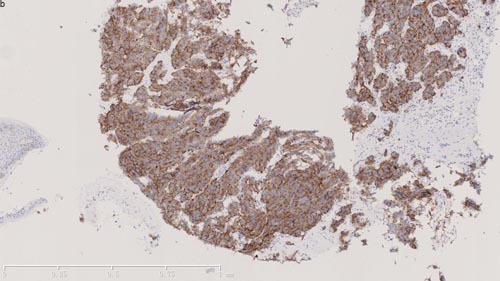 Our case also has several questions to debate. First, the patient’s ctDNA was negative for T790M mutation, but finally she benefitted from treatment of AZD9291. We thought her negative T790M mutation might be a false test result because of the low sensitivity of ARMS in ctDNA detection. Her meanwhile negative exon19 deletion result helped to illustrate it. Oxnard et al explored in 102 patients with T790M-negative plasma using detection of TKI-sensitive EGFR mutation as a control for presence of tumor-derived circulating DNA. Patients with both negative T790M and sensitive mutation could achieve ORR as high as 64% of AZD9291 treatment, which meant a high possibility of false negative. Therefore, testing EGFR sensitive mutation in plasma may help to interpret negative plasma T790M [13]. Secondly, it was questioned whether the hepatic lesions were another primary liver small cell neuronendocrine carcinoma or a histological transformation? We thought it was a transformation because the NSE level was just elevated after AZD9291 treatment and re-biopsy pathology showed small cell carcinoma with EGFR exon19 deletion as well. This case also showed a rapid elevation of serum NSE level accompanied with tumor progression which may indicate SCLC transformation. Detection of persistent elevated NSE level might need attention during EGFR TKIs treatment. Peripheral ctDNA tested by NGS of this case showed mutations of P53, pTEN and PIK3CA. Our NGS detection confirm the previous finding that TP53 mutation accounts for approximately 86% in SCLC [14].

In summary, we deduce that small cell carcinoma transformation is the resistance mechanism to AZD929 for our case. We emphasized the importance of re-biopsy. Both histopathology and molecular test are meaningful, because it may provide more evidence for patient’s precise treatment.

The author(s) indicated no potential conflicts of interest.