Bladder cancer is the ninth most common malignancy worldwide [1]. It has been estimated about 80000 newly diagnosed bladder cancer cases in the United States in 2015 [2]. Bladder Urothelial Carcinoma (BLCA) is the most common histological subtype of bladder cancer. Overall, about 70% of bladder tumors are non-muscle-invasive bladder cancer, and the others are muscle-invasive bladder cancer [3]. Despite recent advances in the surgical technique, the overall survival of BLCA patients has not been dramatically improved, and the five-year survival rate remains at only 50-60% [4-6]. Therefore, it is necessary to identify novel independent biomarkers for diagnostic and prognosis and to develop new targeted therapies for BLCA patients.

Long non-coding RNAs (lncRNAs) are an important category of non-coding RNAs (ncRNAs) with little or no protein-coding capacity, which range from 200 nucleotides to multiple kilobases in length [7, 8]. Accumulated evidence suggests that lncRNAs play crucial roles in regulating gene expression at transcriptional, posttranscriptional and epigenetic levels [7, 9], and participate in various biological processes and pathways, such as transcriptional regulation, cell growth and tumorigenesis [10, 11]. Like mRNA and miRNA, some well-studied lncRNAs have been found to play critical oncogenic or tumor suppressive roles in various types of cancers [12-14]. For instance, HOTAIR, MALAT1 and CRNDE have been showed as oncogenic roles [15-25], while GAS5, MEG3 and lincRNA-p21 as tumor suppressive roles [26-32]. Currently, several expression-based lncRNA signatures have been identified in glioblastoma [33], oesophageal squamous cell carcinoma [34], breast cancer [35], colorectal cancer [36], non-small cell lung cancer [37], multiple myeloma [38] and ovarian cancer [39], highlighting their potential roles as novel independent biomarkers for cancer prognosis. For bladder cancer, recent studies have also revealed that lncRNAs (HOTAIR, SPRY4-IT1, SUMO1P3 and PANDAR) are aberrantly expressed in BLCA patients [40-43]. However, the prognostic power of expression-based lncRNA signature for predicting BLCA patients’ survival remains unclear.

In this work, we performed a comprehensive analysis for lncRNA expression profiles and corresponding clinical information of BLCA patients in the TCGA training dataset. We identified four lncRNAs significantly associated with patients’ survival and constructed a four-lncRNA signature that can effectively predict patients’ survival. The testing dataset and entire dataset further validated the prognostic power of the four-lncRNA signature. Our results demonstrated the four-lncRNA signature can function as novel independent biomarkers for BLCA prognosis and provide novel insights into understanding of the underlying molecular mechanism of BLCA.

The 234 patients with BLCA were randomly divided into a training dataset (n = 117) and a testing dataset (n = 117). The training dataset was analyzed to identify prognostic lncRNAs. At first, we performed a univariate Cox regression analysis to evaluate the association between the expression profiles of each lncRNA and patients’ survival in the training dataset. The result showed that four lncRNAs were identified as prognostic lncRNAs (p-value < 0.001). The detailed information of these four lncRNAs was showed in Table 1. Among these prognostic lncRNAs, the lncRNAs (AC005682.5 and CTD-2231H16.1) with higher expression profiles were associated with shorter survival (coefficient > 0), while the remaining two lncRNAs (CTB-92J24.2 and RP11-727F15.13) with higher expression profiles were associated with longer survival (coefficient < 0).

a,bDerived from the univariate and multivariate Cox regression analyses in 117 patients of the training dataset. 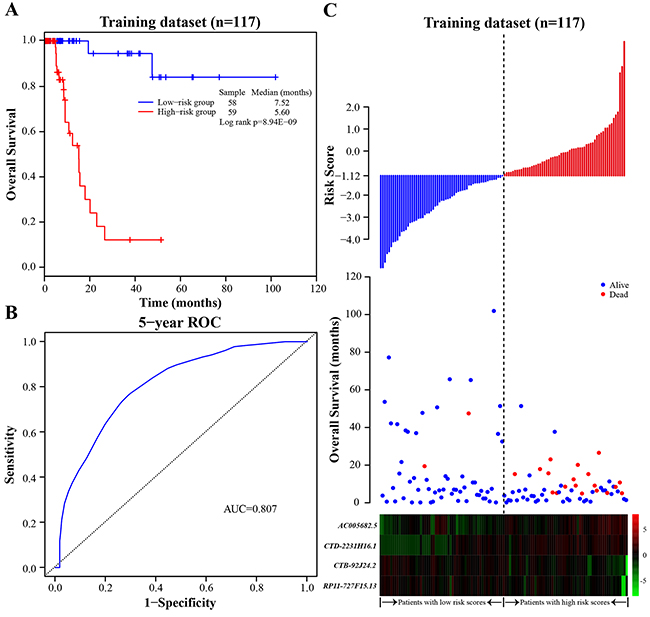 Table 2: Univariate and multivariate Cox regression analyses in each dataset 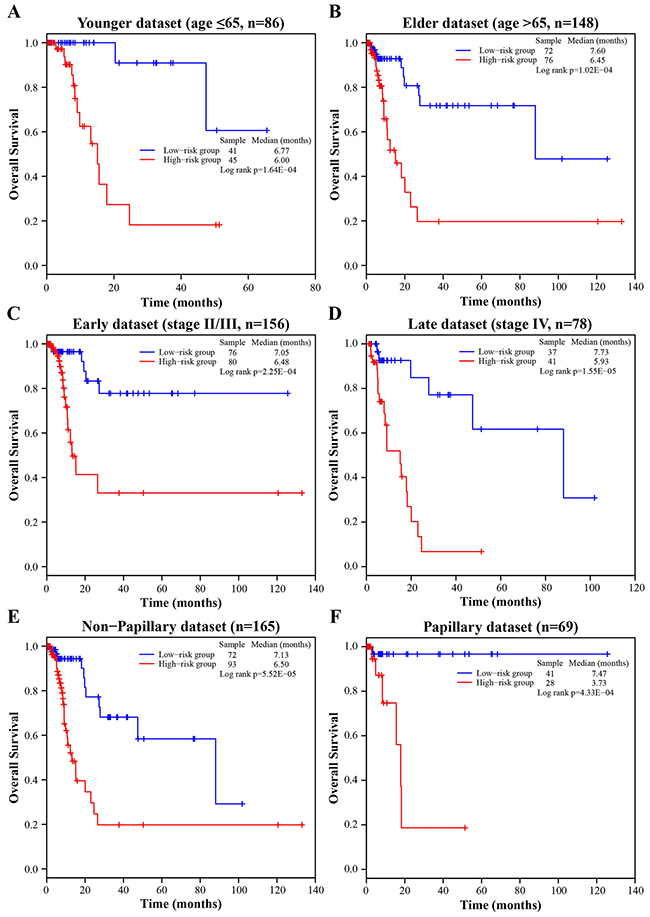 To investigate potential functional roles of the four prognostic lncRNAs in BLCA tumorigenesis, we carried out functional enrichment analyses to predict their functions [44]. We first calculate Spearman correlation coefficients between lncRNAs and protein-coding genes by examining the paired lncRNA and the protein-coding gene expression profiles of 234 patients with BLCA. A total of 1405 protein-coding genes were significantly correlated with at least one of four prognostic lncRNAs (Spearman correlation coefficient > 0.40). Functional enrichment analyses of GO and KEGG pathways revealed that 1405 protein-coding genes were significantly enriched in 50 GO terms (a p-value of < 0.05 and an enrichment score of > 1.0) and 7 KEGG pathways (a p-value of < 0.05 and a fold enrichment of > 2.0). These functionally related GO terms were mainly organized into seven functional clusters including assembly and disassembly of protein and macromolecules, transcription, signal transduction and response to stimulus, cell apoptosis and death, metabolic and catabolic process, cell development, carbohydrate metabolic (Figure 4A). Seven significantly enriched KEGG pathways were observed including tight junction, aldosterone-regulated sodium reabsorption, pathogenic escherichia coli infection, adherens junction, valine, leucine and isoleucine degradation, p53 signaling pathway, glycosphingolipid biosynthesis (Figure 4B). These results of the functional enrichment analyses suggested that the four prognostic lncRNAs may participate in tumorigenesis through regulating or interacting protein-coding genes to affect known BLCA-related biological processes and pathways. 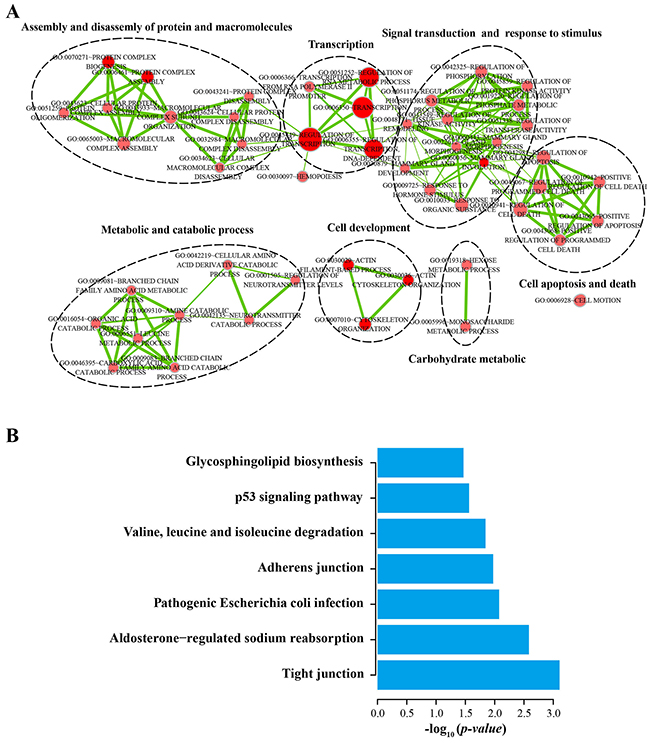 Considerable efforts have been made during the past years to identify expression-based prognostic biomarkers for bladder cancer at protein-coding genes and miRNAs levels [45-47]. More recently, accumulated evidence indicates that dysregulated lncRNAs are implicated in various tumorigenesis processes including proliferation, invasion and apoptosis by acting as tumor oncogenes or suppressor, which has developed a new area for biomarkers. Additionally, plenty of aberrant lncRNA expression in multiple cancers was discovered by the transcriptional profiling analyses [48, 49], highlighting their potential roles as novel independent biomarkers for cancer prognosis. By now, several expression-based lncRNA signatures have been identified in glioblastoma, oesophageal squamous cell carcinoma, breast cancer, colorectal cancer, non-small cell lung cancer, multiple myeloma and ovarian cancer. Compared with protein-coding genes, lncRNAs exhibit greater tissue-, disease- and developmental stage-specific expression, and their expression is more closely related to the tumor status and biological functions [50-54]. Indeed, several lncRNAs, such as HOTAIR, SPRY4-IT1, SUMO1P3 and PANDAR have been found to be associated with bladder prognosis [40, 43]. However, to date, the prognostic power of expression-based lncRNA signature for predicting survival in patients with BLCA has not yet been investigated.

Up to date, although more than tens of thousands of lncRNAs have been discovered in humans over the past few decades [55], only a handful of lncRNAs were functionally well-characterized and the functional study of lncRNAs remains in its infancy. Previous studies have suggested that lncRNAs participated in biological processes and pathways by regulating or interacting with protein-coding genes involved in the same processes, making it possible to infer lncRNA biological functions from their co-expressed protein-coding genes [44, 56, 57]. To detect the biological implication of the four prognostic lncRNAs in BLCA, we performed GO and KEGG functional enrichment analyses for co-expressed protein-coding genes. The results indicated the important functional roles of the four prognostic lncRNAs in tumorigenesis.

In summary, by performing a comprehensive analysis for lncRNA expression profiles and corresponding clinical information, our study identified four prognostic lncRNAs were significantly associated with BLCA patients’ survival and constructed a four-lncRNA signature that can effectively predict patients’ survival. The prognostic power of the four-lncRNA signature was independent of other clinical variables, and showed superior performance compared to known traditional clinical variables in a way. Our results demonstrated the four-lncRNA signature can function as novel independent biomarkers for BLCA prognosis and provided novel insights into understanding the underlying molecular mechanism of BLCA.

Table 3: Clinical characteristics of patients with BLCA in this study

Construction of a prognostic lncRNA signature

where N is the number of prognostic lncRNAs, Expi is the expression profiles of lncRNAi, and Coei is the estimated regression coefficient of lncRNAi derived from the multivariate Cox regression analysis. The lncRNA signature could calculate a risk score for each patient. With the lncRNA signature, BLCA patients in each dataset were classified into high-risk and low-risk groups using the median risk score derived from the training dataset as a cutoff point.

Differences in patients’ survival between the high-risk group and the low-risk group in each dataset were accessed by the Kaplan-Meier survival analyses, and compared by the two-sided log-rank test using the R package “survival” [59]. Furthermore, in order to evaluate whether the prognostic power of the four-lncRNA signature was independent of other clinical variables including age, gender, subtype and tumor stage, multivariate Cox regression and stratified analyses were carried out in each dataset with survival as the dependent variable, lncRNA risk score and other clinical variables as explanatory variables. Hazard ratios (HR) and 95% confidence intervals (CI) were calculated. The time-dependent receiver operating characteristic (ROC) curve analyses within five years as the defining points were performed using the R package “survivalROCR” [60], which has been widely used to evaluate the prognostic performance for survival prediction [61]. Area under the ROC curve (AUC) values were calculated from the ROC curves. All analyses were performed using R software and Bioconductor (version 3.3.0).

Spearman correlation coefficients were computed to evaluate co-expression relationships between prognostic lncRNAs and protein-coding genes. Functional enrichment analyses for the co-expressed protein-coding genes were carried out using the DAVID Bioinformatics Tool (version 6.7) [62, 63] limited to Gene ontology (GO) terms in the “Biological Process” (GOTERM-BP-FAT) and Kyoto encyclopedia of genes and genomes (KEGG) pathway categories with the human whole genome as the background. GO terms with a p-value of < 0.05 and an enrichment score of > 1.0, KEGG pathway with a p-value of < 0.05 and a fold enrichment of > 2.0 were considered as significantly enriched function annotations. Significant enrichment results were visualized and clustered based on the similar function using the Enrichment Map plugin [64] in Cytoscape (version 3.4.0) [65] and R package “goProfiles” [66].

This work is supported by National Natural Science of China to Dong Dong (Grant No. is 31200956).

DD conceived and designed the experiments. ZB, ZW and DD analyzed the data and wrote the manuscript. All authors read and approved the final manuscript.

66. Salicru M, Ocana J and Sanchez-Pla A. Comparison of lists of genes based on functional profiles. BMC Bioinformatics. 2011; 12:401.