Gastric cancer is an aggressively invasive tumor, and one of the most common lethal cancers worldwide [1, 2]. The incidence of gastric cancer in China and some East Asia countries is much higher than that in America or Europe countries [3]. Surgical resection may successfully treat gastric cancer in the early stage of disease [4]. However, due to atypical symptoms at the early stage, over 80% of patients with gastric cancer were diagnosed at an advanced stage, which usually indicates a poor prognosis [5]. In addition, even the addition of novel, molecularly targeted therapies to standard chemotherapy provide only a limited survival benefit [6]. Increasing numbers of biomarkers have been reported that are associated with different types of cancer [6]. Therefore, the identification of novel biomarkers to predict prognosis is important to guide the treatment of patients with gastric cancer.

Spondin-2 (SPON2, Mindin, DIL-1) belongs to the F-spondin family of secreted extracellular matrix proteins [7]. The members of mindin-F-spondin family have three domains: FS1 (for F-spondin), FS2 and thrombospondin type 1 repeats. Spondin-2 has multiple biological functions, including triggering the innate immune response, recruiting inflammatory cells and developing neurons [8, 9]. Recently, it has been reported that increased spondin-2 gene and protein expression was observed in ovarian cancer [10, 11], liver cancer [12, 13], prostate cancer [14, 15] and pancreatic cancer [16]. The expression of Spondin-2 in gastric cancer tissue is higher than that in adjacent non-tumorous tissues [17]. However, the role of Spondin-2 expression on the prognosis of patients with gastric cancer remains unclear. Therefore, the purpose of this study is to evaluate whether Spondin-2 expression is associated with clinicopathological parameters and prognosis of gastric cancer.

The association of spondin-2 with clinicopathological variables

To further explore the significance of spondin-2 expression on aggressiveness in gastric cancer, we firstly discussed the relationship of spondin-2 expression with depth invasion and lymph node metastasis. The rates of spondin-2 overexpression were 61.1% and 57.5% in the T3/T4 group and N1-3 group, while there were only 31.8% and 29.8% in T1/T2 and N0 groups (P < 0.001 and P = 0.001, respectively) (Table 1). In addition, the expression levels of spondin-2 were higher in T3/T4 and N1-3 compared with those in T1/T2 and N0 (P < 0.001 and P = 0.001, respectively) (Figure 2). It has been reported that MMP-9 was associated with aggressiveness in gastric cancer. Therefore, we also evaluated the correlation of Spondin-2 and MMP-9 expression in gastric cancer patients and found that Spondin-2 was positively correlated with MMP-9 expression in 174 gastric carcinoma tissues (Figure 3, r = 0.575, P < 0.001). 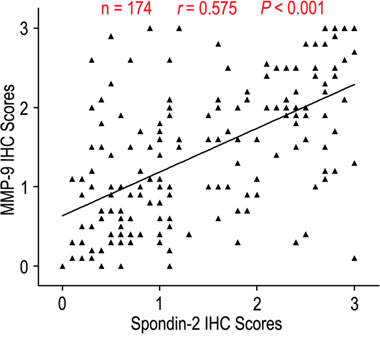 Correlation between spondin-2 expression and prognosis 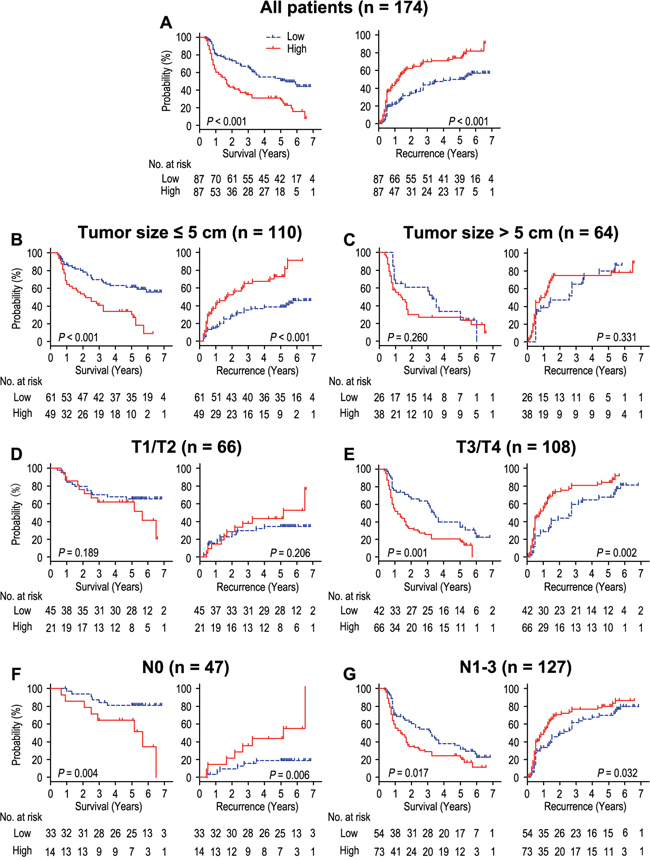 Figure 4: OS and RFS are shown for gastric cancer patients. All patients were stratified according to tumor size, depth of invasion and lymph node metastasis. Kaplan-Meier survival estimates and log-rank tests were used to analyze the prognosis of spondin-2 expression in all patients A. and each subgroup B-G.

The degradation of extracellular matrix (ECM) is a signal for the beginning of invasion and metastasis, and matrix metalloproteases (MMPs) are important molecules involved in ECM degradation during invasion and metastasis [20]. Chu et al.[21] showed that up-regulation of MMP-9 was positively associated with depth of invasion and lymph node metastasis in gastric cancer, and the patients with high MMP-9 expression had worse prognosis than those with low MMP-9 expression. Moreover, Zhao et al.[22] reported that down-regulation of MMP-9 by RNA interference was able to suppress the MMP-9 expression, inhibit tumor cell growth and invasion of SGC7901 gastric cancer in vitro and in vivo. Furthermore, Liao CH et al.[12] showed that spondin-2, which was regulated by thyroid hormone 3, 3’, 5-triiodo-L-thyronine, had an important role in cell invasion, cell migration and tumor progression in hepatocellular carcinomas. Our results revealed the expression of spondin-2 was up-regulation in patients with depth of invasion (T3/T4) and lymph node metastasis (N1-3) indicating higher invasive and metastasizing activity in spondin-2 high-expression cancer cells. In addition, spondin-2 was positively correlated with MMP-9 protein expression in gastric cancer. Collectively, spondin-2 expression in gastric cancer promoting tumor progression indicates that spondin-2 could be a feasible target in cancer therapy.

In summary, we proved that overexpression of spondin-2 may have positive role in tumor invasion, lymph node metastasis and prognosis, and could be a promising biomarker for prognostic prediction in gastric cancer. Detection the spondin-2 expression may help to identify the gastric cancer patients with high-risk factors and thus aid the selection of appropriate therapies. Further studies are warranted to more firmly establish this supposition.

This study was approved by the Institutional Review Board and Human Ethics Committee of Cancer Center of Guangzhou Medical University. Written consent for using the samples for research purposes was obtained from all patients prior to surgery.

All the gastric cancer samples and adjacent non-tumorous gastric tissues were obtained from gastrectomy specimens of 174 patients from the pathology department, the Cancer Center of Guangzhou Medical University (Guangzhou, China). All the operations were performed between January 2006 and October 2008. Patient diagnosis was established pathologically, and none of the patients had received chemotherapy or radiotherapy prior to surgery. The cases were selected consecutively on the basis of availability of resection tissues and follow-up data. There were 113 males and 61 females (median age, 58.0 years; range, 21-83 years). Relevant clinical pathologic features were all collected from the patients’ files. Tumor stage was classified according to the 7th Union International Cancer Control (UICC) TNM staging system [23].

A total of 174 gastric carcinoma samples and their adjacent non-tumorous tissues were detected by immunohistochemistry (IHC). Formalin-fixed, paraffin-embedded specimens from consenting patients were cut in 4 μm sections. Slides were baked at 55°C for 1 h, deparaffinized with xylene and rehydrated using an alcohol gradient. The tissue slides were then treated with 3% hydrogen peroxide in methanol for 10 min to quench endogenous peroxidase activity, and the antigens were retrieved in 0.01 M sodium citrate buffer (pH 6.0) using microwave oven. After 15 min of preincubation in 10% normal goat serum to prevent nonspecific staining, the samples were incubated overnight using a primary antibody, either anti-spondin-2 (Abcam, #ab187920, UK, dilution 1:200) or anti-MMP-9 (Abcam, #ab38898, UK, dilution 1:200), in a humidified container at 4°C. The tissue slides were treated with a non-biotin horseradish-peroxidase detection system according to the manufacturer’s instructions (Gene Tech). Assessments of the staining were scored by two experienced pathologists blinded to the patients’ identity and clinical status. In discrepant cases, a pathologist reviewed the cases and reached the consensus.

All the patients had follow-up records for more than 5 years. The follow-up deadline was October 2015. Patients had follow-up appointments every 3 months for the first 3 years after surgery, every 6 months for the next 2 years, and yearly thereafter. The median follow-up period was 30.0 months (range, 3.0 – 82.0 months) in 174 patients. Recurrence were confirmed by tumor markers levels including CEA, AFP, CA199, CA125 and CA724, B-type ultrasonic inspection every 3 moths, and computed tomography (CT) or magnetic resonance imaging (MRI) every 6 months after gastrectomy. The main causes of death were gastric cancer recurrence. Overall survival (OS) was defined as from the date of surgery to the date of death or last follow-up. Recurrence-free survival (RFS) was measured from the date of surgery until the date of relapse, metastasis, or last follow-up.

All statistical analyses were carried out using SPSS software (version 16.0; Chicago, IL, USA). Interdependence between spondin-2 expression and clinical data was calculated using the chi-square test, and displayed in cross-tables. Correlation of spondin-2 with MMP-9 staining scores was calculated by Pearson χ2 test. Survival curves were generated using the Kaplan-Meier method, and the univariate nanlyses were estimated by the log-rank test. The Cox multivariate proportional hazards regression model was used to determine the independent factors that influence survival and recurrence based on the investigated variables. All reported P values were two-sided and P < 0.05 was considered statistically significant.

The authors declare that there are no conflicts of interest or financial disclosures.

XSL, CJ, JRL participated in the study conception, design, case selection and experiments. XSL, LM and YXS carried out the data collection. PJ, YD and JRL performed the scoring of immunohistochemical staining. XSL, CJ and YS performed the data analysis and writing of the manuscript. All the authors read and approved the final manuscript.