Expression of Notch1 and Numb in small cell lung cancer

Notch signaling in tumorigenesis functions as an oncogene or tumor suppressor according to the type of malignancy. Numb represses intracellular Notch signaling. Previous studies have demonstrated that Notch signaling suppresses the proliferation of small cell lung cancer (SCLC) cell lines. However, in SCLC, the association between Notch1 and Numb expression and clinicopathological factors or prognosis has remained unclear. In this study, we evaluated the expression of Notch1 and Numb in SCLC. We immunohistochemically assessed 125 SCLCs that were surgically resected at 16 institutions participating in either the Hokkaido Lung Cancer Clinical Study Group Trial (HOT) or the Fukushima Investigative Group for Healing Thoracic Malignancy (FIGHT) between 2003 and 2013. Correlations between Notch1 or Numb expression and various clinicopathological features were evaluated. Notch1 expression was associated with ECOG performance status. Numb expression was associated with age, sex, and pathological histology (SCLC or Combined SCLC). Analysis of cellular biological expression did not demonstrate a significant correlation between the expression of Notch1 and of Numb. Multivariate Cox regression analysis showed that high Notch1 expression was an independent favorable prognostic factor for SCLC(hazard ratio = 0.503, P = 0.023). High Notch1 expression, but not Numb expression, is associated with favorable prognosis in SCLC.

Lung cancer is the leading cause of cancer-related death worldwide, and small cell lung cancer (SCLC) accounts for approximately 13–15% of new lung cancers each year [1]. SCLC is characterized by an extremely aggressive behavior with early systemic spreading and the prognosis of patients with SCLC remains poor and further treatment is required [2].

The Notch signaling pathway regulates many fundamental processes essential for normal development such as the control of cell differentiation, survival, proliferation, and angiogenesis. In mammals, there are four Notch receptors (Notch1 to Notch4) and two families of ligands, Jagged (JAG1, 2) and Delta-like ligands (DLL1, 3, 4). Binding of Notch ligands induces proteolytic cleavage of Notch receptor by γ-secretase, thereby releasing the Notch intracellular domain (NICD) into the cytoplasm. The NICD then enters the nucleus, interacts with the transcription factor CBF1/Suppressor of Hairless/Lag1 (CSL), and induces the transcription of several target genes, including hairy enhancer of split 1 (HES1) [3, 4].

Notch signaling in tumorigenesis functions as an oncogene or tumor suppressor according to the type of malignancy [3, 4]. We previously showed that inhibition of Notch signaling by a γ-secretase inhibitor suppresses the growth of non-small cell lung cancer (NSCLC) [5]. Gain-of-function mutations of the NOTCH1 gene are present in about 10% of NSCLC, and activation of Notch1 correlates with poor clinical outcomes in NSCLC patients [6]. Regarding SCLC, it has been reported that overexpression of Notch1 induces G1 cell cycle arrest and inhibits cell growth, epithelial mesenchymal transition (EMT), cell invasion, and metastasis, in vitro and in vivo [7, 8, 9]. However, the relationship between Notch1 expression and clinicopathological factors in SCLC has not been reported.

Numb is a negative regulator of Notch and determines cell fate [10]. Numb interacts with the E3 ubiquitin ligase, Itch, to ubiquitinate Notch receptors and NICD, and Numb interferes with the nuclear translocation of NICD through direct binding to it [11, 12]. Although experimental evidence indicates that Numb has a potential function as a tumor suppressor in many cancers, the role of Numb in SCLC has not been determined.

We hypothesized that Notch1 or Numb expression might be correlated with prognosis in SCLC patients. In the present study, we analyzed the expression of Notch1 and Numb in surgically-resected SCLCs by immunohistochemistry and evaluated correlations between their expression and various clinicopathological features.

Notch1 and Numb expression in SCLC

Normal bronchial epithelial cells were used as positive controls of both Notch1 and Numb expression in immunohistochemical analyses. Weak expression of both Notch1 and Numb was observed in normal alveoli (Figure 1A, 2A). Once processed by γ-secretase, the Notch1 ICD is released from the plasma membrane and translocates into the nucleus, where it activates target gene transcription. Therefore, only membrane staining was considered as negative and cytoplasm and/or nuclear staining were considered as positive staining in the evaluation of activated Notch1 expression (Figure 1A) [6, 13]. In present study, there was no case with only membrane staining. 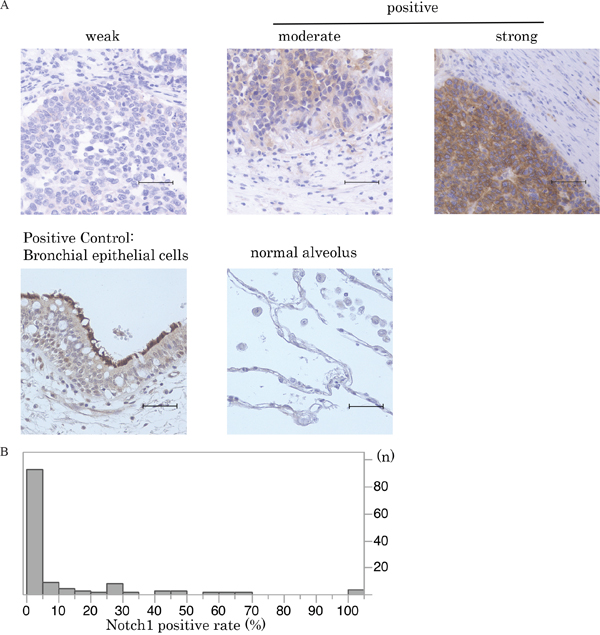 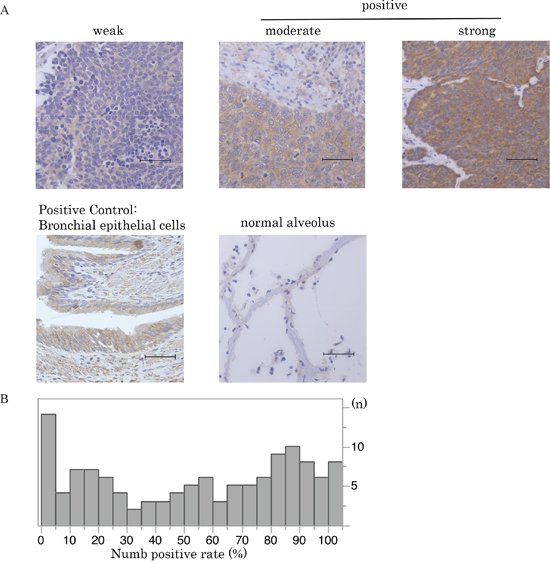 The distribution of the degree of Notch1 expression in the study cohort is shown in Figure 1B (range, 0–100%). The median Notch1-positive staining rate in SCLC tumors was 0% (95%CI:0-0.6). We thus defined cases with more than 5% staining as the Notch1 high expression group. High Notch1 expression was observed in 33 cases (26.4%).

Numb immunoreactivity was present predominantly in the cytoplasm of tumor cells (Figure 2A). The distribution of the degree of Numb expression in the study cohort is shown in Figure 2B (range, 0–100%). The median Numb-positive staining rate in SCLC tumors was 57.8% (95%CI:46.6-70.8). We defined cases with higher than the median positive rate as the Numb high expression group, which included 63 patients (50.4%).

Correlation between Notch1 or Numb expression and clinical and clinicopathological characteristics

Table 1: Relationship between the expression of Notch1 or Numb and clinical and clinicopathological characteristics in 125 cases with surgically resected small cell lung cancer

Table 2: Relationship between the expression of Notch1 and Numb

Table 3: Relationship between the expression of Notch1 or Numb and Neuroendocrine-specific protein expression

Prognostic value of Notch1 or Numb expression in SCLC 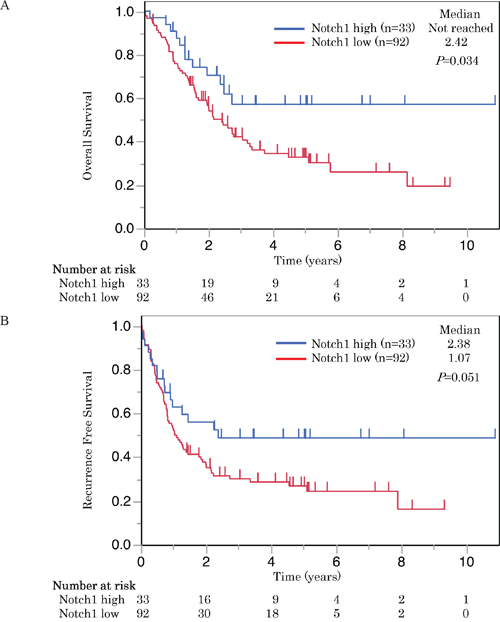 Figure 3: These Kaplan-Meier survival curves illustrate A. overall survival and B. recurrence free survival of patients with SCLC who underwent radical resection. Survival curves were stratified by the expression of Notch1 for all patients with SCLC (n = 125). High Notch1 expression was correlated with longer overall survival and also tended to have longer recurrence free survival in SCLC patients. 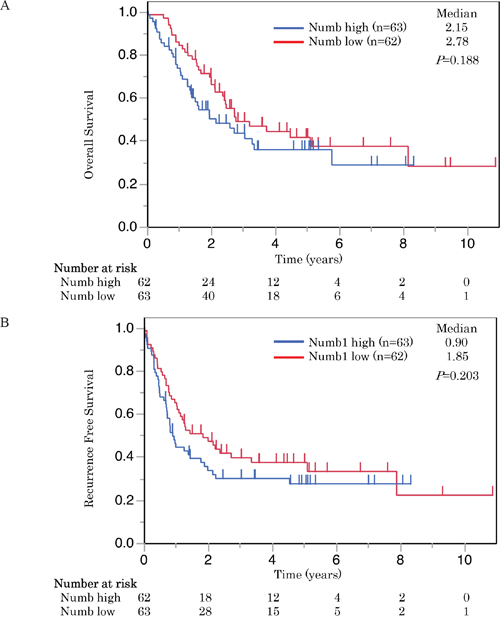 High Notch1 expression is an independent poor prognostic factor in many other cancers, such as breast and gastric cancer [14, 15, 16]. NSCLC patients with high Notch1 expression showed poor survival as well [6, 17]. However, there is another report which demonstrated a divergent impact of Notch1 expression based on histological subtypes, adenocarcinoma and squamous cell carcinoma [13]. It is well known that the pleiotropic functions of Notch can be tumor suppressive or oncogenic depending on the cellular context [4]. In our study, high Notch1 expression was a favorable prognostic factor in patients with SCLC. It has been reported that the overexpression of Notch1 in SCLC cell lines induces G1 cell cycle arrest and inhibits cell growth, EMT, cell invasion, and metastasis, in vitro and in vivo [7, 8, 9]. Recently, comprehensive genomic profiles of human SCLC were analyzed and the most damaging mutations were observed in the extracellular domain of Notch receptors, suggesting that NOTCH genes are tumor suppressors in SCLC [18]. Our findings are consistent with previous reports regarding the tumor suppressive role of Notch1 in SCLC.

Loss of Numb expression has been reported in some types of human cancers, such as breast cancers and NSCLC [6, 19]. In esophageal carcinoma and malignant pleural mesothelioma, overexpression of Numb suppresses tumor cell growth and loss of Numb expression is associated with poor prognosis [20, 21]. Although most previous reports regarding the role of Numb in tumorigenesis suggest that Numb functions as a tumor suppressor, there have been few reports that have investigated the function of Numb in lung cancer. In the present study, Numb expression was not associated with prognosis in SCLC patients. Numb contains an amino-terminal phosphotyrosine-binding (PTB) domain and C-terminal proline-rich (PRR) and Eps15 homology regions. It has been reported that an increased level of the Numb PRR long (PRRL) isoform promotes cell proliferation, whereas the PRR short (PRRS) isoform induces cell differentiation [22, 23]. Although we evaluated pan Numb expression in the present study, the expression of each Numb isoform should probably be investigated in SCLC.

In conclusion, high Notch1 expression, but not Numb expression, is correlated with favorable prognosis in SCLC patients. Notch1 provides a novel prognostic marker of SCLC and activation of Notch1 may contribute to the development of a new strategy for treating patients with SCLC.

125 consecutive patients with primary SCLC who had undergone complete surgical resection of the primary lung tumor from January 2003 through January 2013 at 16 institutions participating in either the Hokkaido Lung Cancer Clinical Study Group Trial (HOT) or the Fukushima Investigative Group for Healing Thoracic Malignancy (FIGHT) were analyzed [25]. Written informed consent was obtained only from patients who were still alive at the time of data accrual (from February 2013 through January 2014). All of the cases were included in the current study based on the following criteria: a complete surgical resection of primary tumors and a central re-review confirmed a pathological diagnosis of SCLC or combined SCLC according to the 2004 World Health Organization classification [26]. All individual data were obtained from medical records and de-identified. Stages were determined or reclassified according to the seventh version of the tumor-node-metastasis (TNM) staging system. The FFPE tissue block was cut into 20 to 30 sections, each 3 μm thick, and placed on glass slides for IHC.

Notch1 and Numb expression was analyzed by immunohistochemistry. Archived sections were deparaffinized with xylene and rehydrated with graded concentrations of ethanol. For antigen retrieval, sections were placed in 10 mM citrate buffer, pH 6.0, and heated in a pressure cooker. Next, the sections were immersed in methanol containing 3% hydrogen peroxide for 10 minutes to block endogenous peroxidase activity, and were then incubated with normal goat serum to block nonspecific antibody binding sites. The sections were reacted consecutively with rabbit monoclonal anti-Notch1 antibody (1:400) (#3608, Cell Signaling Technology, Danvers, MA) or rabbit polyclonal anti-Numb antibody (1:500) (ab14140, Abcam, Cambridge, UK), at 4°C overnight. Immunostaining was performed using the biotin-streptavidin immunoperoxidase method with 3,3-diaminobenzidine as a chromogen. Hematoxylin solution was used for counterstaining. One positive sample was included as a positive external control with each staining batch. Positive tumor cells were counted under high magnification (×400) in five random and non-overlapping fields (100 tumor cells per field, total of 500 tumor cells per specimen). Positivity was defined as moderate-to-strong staining intensity, ‘moderate’ being of similar intensity to the positive control and ‘strong’ being of even higher intense. Only membrane staining was considered as negative and cytoplasm and/or nuclear staining were considered as positive staining in the evaluation of activated Notch1 expression. Immunohistochemical evaluations were performed independently by two investigators (H.K. and J.S.) who were blinded to the status of other immunohistological and clinical data, using a BX 40 microscope (Olympus, Tokyo, Japan). In the case of a discrepancy, the final results were decided by consensus.

26. Pathology and Genetics of Tumours of the Lung, Pleura, Thymus and Heart Third Edition. IARC Press 2004.