Laryngeal carcinoma (LC) is a common tumor of the head and neck. It accounts for 1% - 5% of all malignant tumors, comprises 3.3% - 8.1% of all the head and neck malignant tumors, and among these its incidence is only lower than that of nasopharyngeal carcinoma [1]. According to GLOBOCAN 2012 [2], 156,877 individuals were diagnosed with LC worldwide, while 20,014 cases were diagnosed in China. In this country, the age-adjusted incidence was 1.1 per 100,000, and the age-adjusted mortality rate was 0.7 per 100,000 for both sexes. LC generally affects people aged 50-70 years, especially males. In China, the ratio of men to women diagnosed with LC was 10.5:1 [2, 3]. In recent years, the incidence of LC has increased steadily because of multiple carcinogenic factors [4, 5], and in China is predicted to reach 55,900 new cases/year in the next 5 years. As with other cancers, the pathogenesis of laryngeal carcinoma involves the combined effects of environmental and genetic factors. To date, several genes have been implicated in the occurrence of LC and have been shown to affect its prognosis [6–8]. Recent studies have shown that single genes may be associated with many related cancers [9]. For example, the murine double minute 2 (MDM2) gene has been proposed to contribute to the emergence and development of many tumors, especially digestive carcinomas [10] and LC [1].

The association of single nucleotide polymorphisms (SNP), the most common form of genetic variation, with multiple cancers, has also been highlighted [11, 12]. While extensive studies have evaluated the relevance of clinicopathological parameters such as surgical treatment modalities, age, tumor stage, differentiation, and lymph node metastasis, as prognostic factors in head and neck cancers [13], only a few basic studies have revealed an essential role of specific genes in digestive tract cancers. Moreover, the association between SNPs within or near these genes and LC prognosis has not been fully investigated. In the present study, we analyzed the association of 24 SNPs related to digestive tract cancers with LC prognosis in 170 Han Chinese male patients, and identified four SNPs significantly associated with OS. These results shed light on the genetic component of LC and may prove useful to guide further studies addressing its pathogenesis.

Table 1: Clinicopathological characteristics of the patients included in this study

Table 3: Analysis of SNPs associated with OS in LC patients 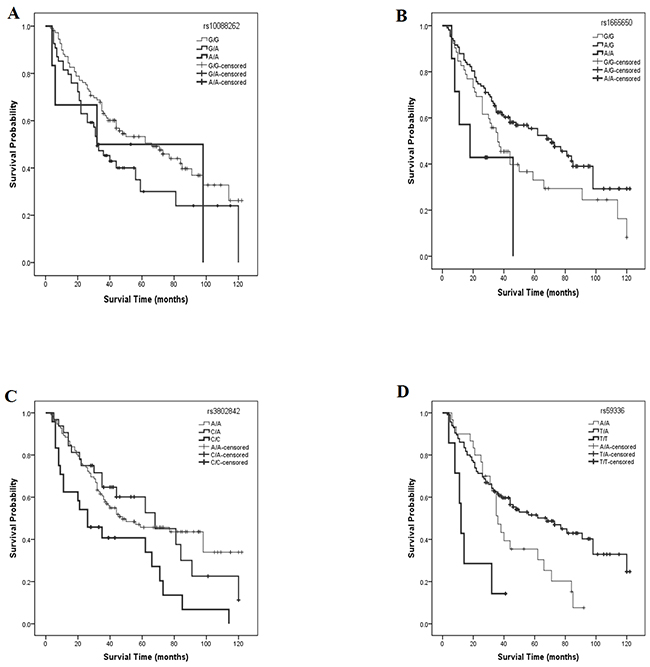 Our study analyzed, during a ten-year follow-up, the prognostic association of clinical parameters and multiple cancer-related SNPs in 170 male LC patients from northwest China. We found that five clinical characteristics [laryngectomy, tumor differentiation, tumor status (T), regional lymph node status (N), and clinical (TNM) stage] were correlated with survival. Specifically, clinical outcome was affected by laryngectomy variants, as TL had poorer prognosis than PL, with a median survival of 30 months, compared with 73 months for PL. This conclusion, however, may be confounded by the fact that TL is more often performed to remove larger malignant tumors, which carry higher risk. The associations found for other clinical features were consistent with the findings of previous studies, as low tumor differentiation, and higher T, N, and clinical stages all correlated with worse prognoses [15, 16].

Of the 24 SNPs analyzed, four showed an association with LC prognosis in univariate analyses. After adjusting for significant clinical parameters, multivariate regression analysis revealed that two SNP genotypes, i.e. “G/A” of rs10088262 (HR: 1.969) and “C/C” of rs3802842 (HR: 1.839) were significantly associated with LC prognosis. The SNPs analyzed here have been shown to be associated with risk for diverse types of cancer. Rs10088262 is an intergenic variant located on chromosome 8q24.13; its minor allele “A” has been correlated with reduced risk of esophageal cancer [12]. However, in the present study the genotype “G/A” of this SNP indicated poor prognosis, with a median survival time of 32 months, compared with 66 months for the “G/G” genotype.

Carrying the “C” allele at rs3802842 has been associated with a lower risk for rectal tumors [17]. Another study, however, suggested that the “CC” genotype of rs3802842 may significantly increase colorectal cancer (CRC) risk in the recessive model [18]. Our analysis revealed that the median survival of genotype “C/C” of the rs3802842 polymorphism was only 26 months, significantly less than the homozygous wild genotype “A/A” (48 months). Rs3802842 maps to a region between “colorectal cancer associated 1” and “colorectal cancer associated 2” (C11orf92/COLCA1- C11orf93/COLCA2) genes, located on 11q23.1, which are arranged on opposite strands and share a regulatory region that contains genetic variants that are in high linkage disequilibrium with rs3802842. Expression levels of COLCA1 and COLCA2 transcripts correlate with rs3802842 genotypes. Genetic, expression and immunohistochemical data implicate COLCA1 and COLCA2 in the pathogenesis of colon cancer, whereas histologic analyses indicate the involvement of immune pathways [19].

170 male patients, aged 32-82 years (average age, 60.7 years), were enrolled at the First Affiliated Hospital of Xi’an Jiao Tong University from January 30, 2002 to April 7, 2003; patient follow-up ended on April 7, 2013. Patients received neither radiotherapy nor chemotherapy before enrollment, and in all cases LC diagnosis was confirmed by two pathologists. All participants were unrelated Han Chinese and had no other malignancy histories.

A standardized epidemiological questionnaire including residential region, age, smoking status, alcohol use, ethnicity, education status, and family history of cancer was used to collect personal information through in-person interviews. Related information was collected through a consultation with the treating physicians or from medical chart reviews. LC staging relies on the TNM system designed jointly by the Union International Cancer Control Version 7.0 (UICC 7.0). Venous blood samples (5 ml) and signed informed consent were obtained from each participant. All blood samples were quickly frozen in liquid nitrogen and stored at -80°C. This study was approved by the ethics committee of the First Affiliated Hospital of Xi’an Jiao Tong University.

A/B stands for minor/major alleles on the sample frequencies.

Patients’ baseline characteristics, disease stage, and treatment modalities were summarized using descriptive statistics. The overall survival (OS) time was defined as the period from diagnosis until death of any cause or until the date of the last follow-up, at which data point was censored. All summary statistics on time-to-event variables were estimated according to the Kaplan-Meier method and compared using the log-rank test. Univariate and multivariate Cox proportional hazards regression models were used to calculate the hazard ratios (HR), and 95% confidence intervals (95% CI) of the effect of clinical variables and SNPs, respectively, on the overall survival (OS) of LC patients. SPSS software (version 21.0) was used for statistical analysis. A p value < 0.05 was considered significant.

We found that five clinicopathological charac-teristics, namely total laryngectomy, low differentiation, T3-T4, N1-N2, and clinical stage III-IV, were associated with survival in LC patients. Although four SNP were found to be significantly associated with OS in univariate cox regression analysis, multivariate analysis showed that two SNPs (rs10088262 and rs3802842) were associated with LC prognosis after adjustment for clinical factors. Combined with previous research, our study suggests an association for these SNPs with multiple cancers. Further larger studies are required to validate our findings and to assess the molecular mechanisms underlying the observed associations.

This study was funded by the China Postdoctoral Science Foundation (NO. 2015M572575) and Key Science and Technology Program of Shaanxi Province, China (NO. 2014K11-01-01-09). We are grateful to the patients for their participation in this study. We also thank the clinicians and hospital staff who contributed to the sample and data collection for this study.

6. Simsek H, Han U, Onal B and Simisek G. The expression of EGFR, cerbB2, p16, and p53 and their relationship with conventional parameters in squamous cell carcinoma of the larynx. Turkish journal of medical sciences. 2014; 44:411-416.