We conducted a study of Ganoderma lucidum metabolites and isolated 35 lanostane-type triterpenoids, including 5 new ganoderols (1-5). By spectroscopy, we compared the structures of these compounds with known related compounds in this group. All of the isolated compounds were assayed for their effect against the human breast carcinoma cell line MDA-MB-231 and hepatocellular carcinoma cell line HepG2. Corresponding three-dimensional quantitative structure–activity relationship (3D-QSAR) models were built and analyzed using Discovery Studio. These results provide further evidence for anti-cancer constituents within Ganoderma lucidum, and may provide a theoretical foundation for designing novel therapeutic compounds.

Literature recording of Ganoderma lucidum (Fr.) P. Karst. (Ganodermataceae) was first found in Sheng Nong’s Herbal Classic over two thousand years ago. Since then, fungi have been used as traditional Chinese medicines for the prevention or treatment of various chronic diseases [1, 2]. As research on the chemical constituents of these medicinal or edible fungi has increased, there is pre-clinical evidence for G. lucidum in an array of settings including cancer treatment [3–6], diabetic control [7–9], hepato-protection [10–13], antiviral treatment [14], and immune-modulation [15, 16].

In particular, G. lucidum in cancer research has become more prominent over the recent decades. Triterpenoids and polysaccharides are believed to form the pharmacodyamic material basis of the demonstrated anti-cancer effects. Lanostane-type triterpenoids are typical constituents of G. lucidum. Since the first triterpenoids (ganoderic acid A) were reported by Kubota in 1982, over 150 compounds have been isolated and reported in G. lucidum [17], with the number continually increasing. In order to search for bioactive anti-tumor metabolites, we launched a systematic study of the chemical constituents extracted from G. lucidum and other members of medicinal mushrooms [18–22]. In the present study, 35 triterpenoids were isolated, including 5 novel compounds. We then performed structural elucidation and cytotoxic assays using these compounds, and built 3D-QSAR models to predict anti-cancer activity. 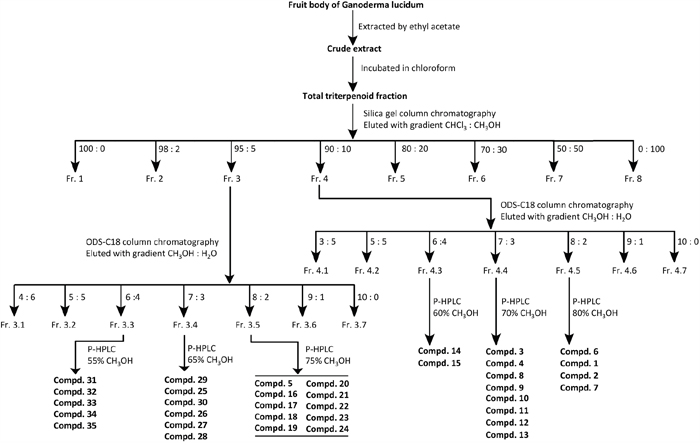 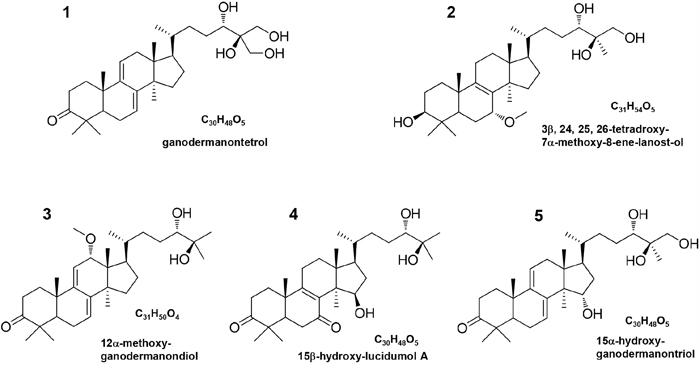 a means multiplet or overlapped with other signals. 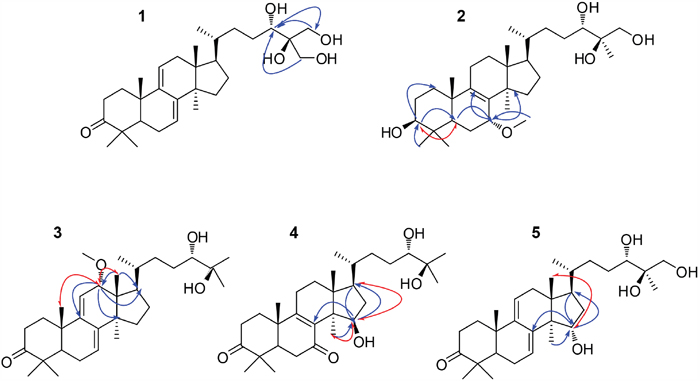 It has been reported that triterpenoids possess cytotoxic activity on human cancer cells. We analyzed the effect of the isolated triterpenoids on human breast cancer cells MDA-MB-231 and hepatocellular cancer cells HepG2, and the results were summarized in Table 3. Among the compounds examined, compounds 1-3 were highly cytotoxic in both types of cancers. Compounds 4, 7, 20 and 24 exhibited moderate cytotoxicity. The rest compounds showed weak inhibition against the cancer cells. Since all compounds displayed similar effects on both cancer cells, we performed cell survival assay using compounds 1-4, 8, 17, 20, 22 and 24 on MDA-MB-231 cells. Compounds 3 and 20 appeared to produce significantly stronger effect on the viability of MDA-MB-231 cells (Table 4). 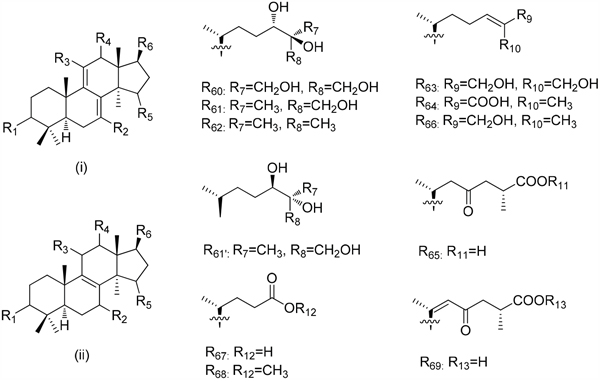 a The activity was shown as IC50 value, which was the concentration (μM) of tested compound that resulted in 50% inhibition of cell growth. Results were expressed as the mean value of triplicate data points.

3D-QSAR was then used to investigate the structure-activity relationship for inhibiting human breast cancer cells MDA-MB-231. Illustrated in Table 5, the training and test set of the 17 compounds (1-9, 17, 19-24 and 28) with accurate IC50 ranging from 21.2 to 163.5 μM was randomly selected for correlation analysis in due proportion that ratio of training set was 0.765, and ratio of test set was 0.235 by the Diverse Molecules method of Discovery Studio 3.1. The calculated pIC50 values ranged from 3.78 to 4.71. The correlation coefficient (r2) between the observed and predicted activity of the training set was found to be 0.968, whereas that of the test set was found to be 0.317, which proved that this QSAR model was acceptable. The predicted pIC50 values and residual errors of the 17 compounds analyzed using this QSAR model were listed in Table 5. A plot of the observed pIC50 versus the predicted data is provided in Figure 4, in which the plot of the actual IC50 versus the predicted values indicated that this model was reliable in forecasting activity for G. lucidum triterpenoids. Moreover, the molecules aligned with the iso-surfaces of the 3D-QSAR model coefficients on van der Waals grids (Figure 5a) and electrostatic potential grids (Figure 5b). It was widely accepted that a better inhibitor based on the 3D-QSAR model should have strong van der Waals attraction in the green areas and a polar group in the blue electrostatic potential areas (which were dominant close to the skeleton).

a Compounds were selected as the test sets while the rest ones were in the training sets. 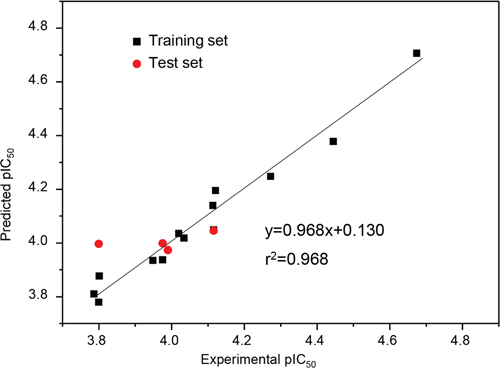 Figure 4: Experimental versus predicted breast carcinoma inhibitory activities of the training set and the test set. The well agreement between predicted pIC50 value and experimental pIC50 value for both test sets and training sets indicated that this model was reliable in forecasting activity for G. lucidum triterpenoids. 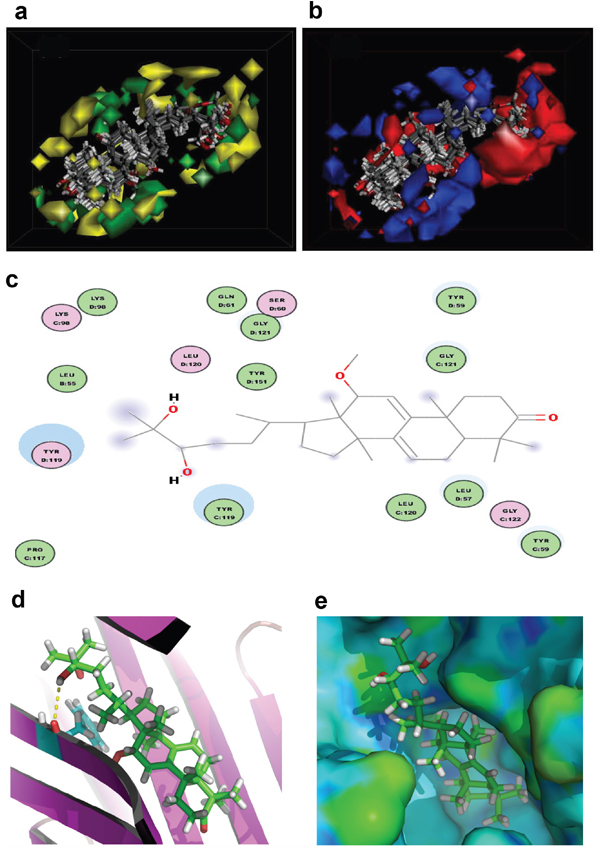 As depicted in Table 3, compound 3 showed the highest cytotoxicity, which suggests that compound 3 may exhibit the most potent affinity for its target. Since experimentally identifying and validating a target for a biological agent is time-consuming and costly, we used Pharmaceutical Target Seeker (PTS) [40] to predict potential targets of compound 3 and found that its most possible target is tumor necrosis factor α (TNF-α; PDB code: 2AZ5). To gain better understanding on the potency of the compound, we analyzed the interaction of compound 3 with TNF-α. The molecular docking was performed by inserting the compound into the binding site of TNF-α. All docking runs were applied by Discovery Studio. The binding interaction energy (-142.896 ± 50.365 kJ/mol) was predicted. Figure 5c-5e showed the binding mode of compound 3 interacting with 2AZ5 protein and the docking results revealed that the amino acid Tyr119 located in the binding pocket of the protein played vital role in the conformation with compound 3, which were stabilized by one hydrogen bond. The hydrogen bond was formed relating to Tyr119, which connected to hydrogen atom of hydroxyl of compound 3 part with 2.8 °A. This molecular docking model suggests that compounds 3 may target TNF-α. TNF-α is an extraordinarily pleiotropic cytokine with a central role in immune homeostasis, inflammation, and host defense. TNF-α is a double-dealer. On one hand, TNF-α functions as an endogenous tumor promoter, because TNF-α stimulates cancer cell proliferation, invasion and metastasis. It also induces tumor angiogenesis. On the other hand, TNF-α functions as a cancer killer. Modulation of the activity of TNF-α will offer possibilities for cancer therapy. Since Ganoderma lucidum plays a central role in immune homeostasis, compound 3 may be developed as an agent for cancer immunotherapy.

35 triterpenoids including 5 new compounds were isolated from the fruiting bodies of Ganoderma lucidum. The chemical structures of the new compounds were elucidated by spectroscopy. All of the compounds were assayed for their cytotoxic activity against the human breast carcinoma cell line MDA-MB-231 and hepatocellular carcinoma cell line HepG2, and the structure–activity relationships were revealed by 3D-QASR. Compound 3 showed the highest cytotoxic activity and it may target TNF-α. Our work may provide a guideline to design and optimize more effective inhibitors for human breast carcinoma based on the triterpenoids from Ganoderma lucidum. Our next task is to chemically synthesize this compound, confirm its activity, and explore its anticancer mechanism, and develop it as an agent for cancer immunotherapy.

Characterization of the new compounds

The cell culturing conditions, viability, and cell death assay was performed as described [41–43]. In brief, human breast carcinoma cell line MDA-MB-231 and hepatocellular carcinoma cell line HepG2 were used in the study. The cells were cultured in DMEM supplemented with 10%FBS, 100 U/mL penicillin/ streptomycin at 37°C, 5%CO2 in an incubator (SANYO, MCO-18AIC). Cells (1 x 105 cells/mL) were seeded in 24-well plates (500 μL/well). Four hours after inoculation, Compounds 1-35 were added individually into the cultured cells at different concentrations. After 48 h incubation, the cells were detached by trypsin, collected and analyzed by trypan blue staining for cell viability. Each experiment was repeated three times. Each treatment was performed with three replicates. Cell inhibition rate (IR) was expressed as follows:

IR and the corresponding concentrations of the compounds were inputed into SPSS and the Probit analysis was uesd for IC50 calculation. Data were expressed as mean ± SD (standard deviation).

The survival assay was performed as described [44, 45]. MDA-MB-231 cells (5 x 104 cells/well) were seeded in 24-well plates with 500 μL DMEM containing 10% FBS. 24-hour after cell inoculation, cells were washed gently with PBS twice and cultured in serum-free DMEM. The compounds 1-4, 8, 17, 19, 20, 22 and 24 were added to the wells at different concentrations. The medium used to dissolve compounds served as a control. After 24 h treatment, the cells were harvested, counted using trypan blue staining. The experiments of each compound were repeated three times. Each treatment contained three replicates. Cell inhibition rate (IR) was expressed as follows:

IR and the corresponding concentrations of the compounds were inputed into SPSS and the Probit analysis was uesd for IC50 calculation. Data were expressed as mean ± SD.

A subset of 13 compounds was utilized as a training set for QSAR modeling using the procedure as described [46, 47]. Because it is essential to assess the predictive power of the resulting QSAR models on an external set of inhibitors, the remaining 4 molecules (ca. 25 % of the dataset) were employed as an external test subset for validating the QSAR models by the Diverse Molecules protocol in the Discovery Studio 3.1. The selected test compounds were compounds 6, 9, 19 and 24.

The inhibitory effect of the compounds observed (IC50; μM) was changed to a negative logarithmic scale (pIC50; μM), and then used for subsequent QSAR analyses as a response variable.

For the molecular docking model, the three-dimensional X-ray structure of searched target acquired from the RCSB protein data bank (http://www.pdb.org) was selected as the template. All bound water and ligands were eliminated from the protein and the polar hydrogen was added to the proteins. The docking procedure was carried out using CDOCKER protocol for receptor-ligand interaction section of Discovery Studio [48]. Initially, the three-dimensional structures of the compound in this paper were built and energetically minimized by using MMFF94 with 5000 iterations and minimum RMS gradient of 0.10. Molecular docking of all compounds was then performed using the Discovery Studio as implemented through the graphical user interface CDOCKER protocol. CDOCKER is an implementation of a CHARMm based molecular docking tool using a rigid receptor.