Background: Acute respiratory distress syndrome (ARDS) is a complication caused by pulmonary and/or external factors. In this study, we investigated the protective mechanisms of glabridin in lipopolysaccharide (LPS) induced ARDS in rats.

Results: GLA treatment at dose of 30 mg/kg decreased LPS-induced lung W/D ratio and alleviated evident lung histopathological changes. Expressions of TNF-α and IL-18 were suppressed by GLA in plasma. The levels of SPA, MDA and NO in lung were down-regulated significantly in groups administrated with GLA. While the SOD level increased after GLA administration. Additionally, the attenuation of inflammatory responses by GLA was closely associated with p38MAPK/ERK pathway, and the expressions of protein p-p38MAPK and pERK were inhibited by GLA in LPS-induced ARDS rats.

Conclusions: Glabridin significantly ameliorated the lung injury induced by LPS in rats via the inhibition of p38MAPK and ERK signaling pathway, antioxidant effect and reducing inflammation.

Sepsis is a common complication among clinical critical patients, which may lead to multiple organ dysfunction syndrome (MODS). The lung is the most common target organ of early injury. Acute respiratory distress syndrome (ARDS) is a complication that arises in the intensive care unit and contribute to remarkable morbidity and mortality. It is characterized by increased pulmonary alveolar capillary membrane permeability caused by various pathogenic factors. Due to the rapid progression of the disease and lack of effective treatment, it is urgent to develop and validate pharmaceutical drugs for the treatment of ARDS [1].

Traditional Chinese herbal medicine glabridin (GLA) is a kind of flavonoid extracted from licorice flavonoids. Glabridin has been thought to be have benefits ranging from anti-inflammatory, antioxidant and estrogen-like effect to inhibition of tyrosine activity [2]. The lipopolysaccharide (LPS) components of Gram-negative bacteria are reported to be an important risk factor for ARDS. Mitogen activated protein kinases (MAPKs) signaling pathway is the major signal transduction pathways regulating the production of inflammatory cells and has a close relationship with the LPS-induced ARDS [3]. Therefore, the present study aims to investigate the protective effect and possible mechanism of glabridin on ARDS through LPS-induced ARDS model in rats.

Effects of glabridin on MDA, NO and SOD in LPS-induced ALI rats

The table indicates the change of SOD, MDA, NO among the groups, compared with control group aP < 0.05, and compare with LPS group bP < 0.05.

Under light microscopy, the normal H&E stained lung tissue was intact, with clear alveolar space and no congestion in alveolar wall (Figure 1A). Diffuse thickening of the alveolar wall, inflammatory cells infiltration, partial alveolar hemorrhage and structural damage could be observed in all LPS alone groups (Figure 1C–1E). The most typical changes were detected at 12 h after LPS administration (Figure 1C). Administration of glabridin effectively alleviated the destruction of lung structure (Figure 1F–1H). Thus, glabridin can ameliorate the lung injury induced by LPS in rats. 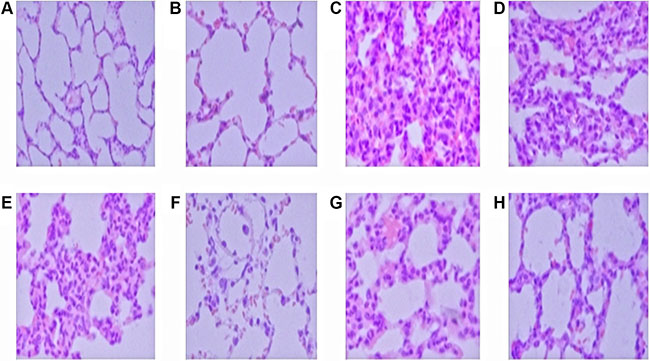 Positive signal of p38MAPK/ERK was weak and occasionally could be found in the airway epithelium and alveolar epithelial cells (Figure 2A, 2B, 2E, 2F). The expression of phosphorylated p38MAPK/ERK positive signal in LPS groups was significantly enhanced (Figure 2C, 2G), which mainly distributed in airway epithelium cells, infiltration of inflammatory cells and vascular endothelial cells. Both the cytoplasm and cell nucleus were positive. The distribution of p38MAPK/ERK positive cells in LPS+GLA groups was similar to that in LPS alone groups (Figure 2D, 2H). However, the positive expression cells were significantly decreased and the signal was lower than that in LPS+GLA groups. 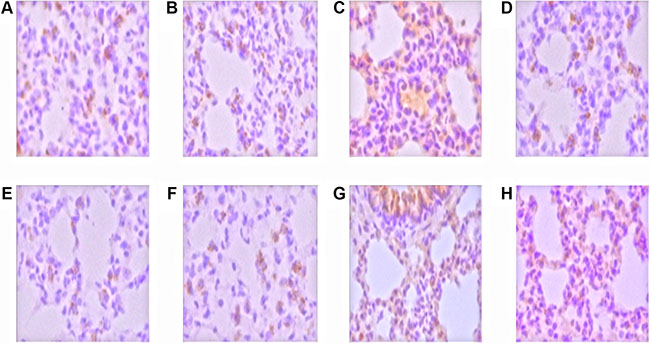 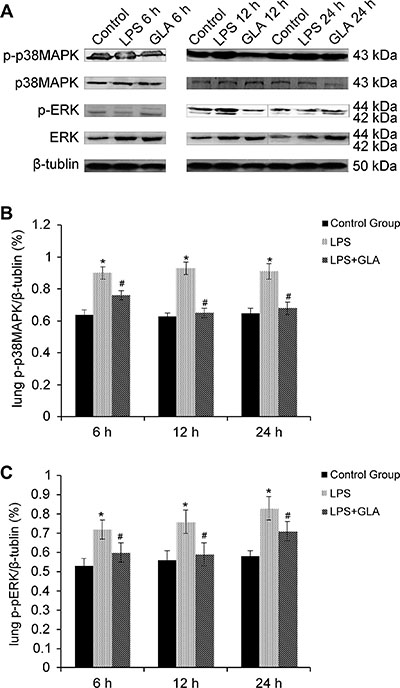 Acute respiratory distress syndrome is caused by pulmonary injury and / or extrapulmonary injury. It is the earliest and most common tissue injury of sepsis. At present, the release of excessive inflammatory mediators and the activation and aggregation of the inflammatory cells are considered to be the key pathogenesis of sepsis and ARDS [1]. Current treatment is limited to mechanical ventilation and avoiding fluid overload. Only several drugs are proven to be effective in the treatment of lung injury. Glabridin, a traditional Chinese herbal, is the main ingredient of licorice flavonoids with broad biological activity: antioxidant [4], anti-inflammatory [5], regulation of energy metabolism, antibacterial [6] and skin whitening, etc. In murine macrophages and microglia, licorice flavonoids have been shown to inhibit the release of prostaglandin E2 (PGE2), IL-1, nitric oxide (NO) and TNF-α. Therefore, Glabridin may show benefits in the treatments of ARDS. This study mainly investigates the role of glabridin in the pathogenesis of ARDS induced by LPS in rats and its possible mechanism.

Yang’s [10] study have shown that the anti-inflammatory mechanism of flavonoids in licorice mainly inhibit ERK phosphorylation levels in ERK/MAPK pathway. It can down-regulate the expression of iNOS and COX-2 gene and protein, but independent of JNK and P38 pathway. The results of immunohistochemistry and Western-bolt analysis in this study showed that glabridin could reduce the phosphorylation of p38MAPK and ERK in lung tissue induced by LPS. ERK and p38MAPK signaling pathways are well known for their relationship with inflammatory response and lung injury. Therefore, our study confirmed that p38MAPK and ERK signaling pathway could be inhibited by glabridin. It is different from Yang’s research that glabridin can inhibit the expression of ERK signaling pathway only.

Administrated with glabridin, the content of MDA in the lung homogenate decreased significantly and the content of SOD increased obviously. The pathological changes of the lung tissue in the LPS+GLA groups were less severe than that in the LPS alone groups, suggesting that glabridin yields anti-oxidation activity both in brain and lung tissue. This study confirmed that glabridin could alleviate LPS-induced lung injury in rats through its strong antioxidant effects, which is consistent with previous studies [6]. NO is more than an inflammatory mediator. Studies have shown that LPS can stimulate the rat lung tissue iNOS expression and the excessive release of NO [14]. Overloaded NO in lung tissue is considered to be one of the pathogenesis of ALI. Yehuda’s [14] study suggested that glabridin could decrease LPS-induced iNOS mRNA expression by 48%. The results showed that the content of NO in LPS group was significantly higher than that in control group.

In infectious lung injury, the secretion of SP decreased due to the degeneration and destruction of type II alveolar epithelium. Increasing permeability of alveolar capillary results in two-way leakage of the intravascular macromolecules and SP [16]. Polymorphonuclear leukocytes and other intravascular inflammatory cells accumulate and migrate. Elastase released by these cells and plasma protein leaked out can disintegrate and denaturalize SP, which eventually attenuate surface tension relieving. In addition, the increase of pulmonary capillary permeability allows SP entering the bloodstream. SP-A also has the function of regulating macrophages, promoting chemotactic activity, enhancing phagocytosis and stimulating the production of oxygen free radicals. Thus, an increase of the oxygen free radicals in blood exacerbate the sepsis, forming a vicious circle. In this study, the levels of SPA in 12 h and 24 h LPS groups were significantly higher than that in control group, while the levels in 6 h group not. The content of SPA in LPS+GLA groups was lower than that in LPS alone groups. Taking the W/D ratio of lung into consideration, glabridin may have the potential to inhibit the degradation of pulmonary surfactant, increase the activity of SPA, decrease the permeability of pulmonary capillary, reduce the aggregation inflammatory factors and alleviate lung edema. Therefore, glabridin plays a protective role in sepsis induced lung injury in rats.

64 healthy male Wistar rats, weighing approximately 160 to 200 g, were obtained from the Laboratory Animal Center of Inner Mongolia University (Hohhot, China), SCXK (Mongolian) 2002-0001. All the rats were provided with water and chow ad libitum under standardized laboratory conditions for 1 week to adapt the environment before experiments. All the experimental protocols were approved by Animal Ethics Committee of the Affiliated Hospital of Innner Mongolia Medical University.

All rats were randomly divided into 8 groups and each group contained 8 rats: a control group (saline), a GLA group, 3 LPS groups (6 h, 12 h, 24 h), 3 LPS+GLA groups (6 h, 12 h, 24 h). LPS (10 mg/kg) was administered intraperitoneal to induce acute lung injury, and the control group was injected with the same dose of saline. The GLA group received glabridin 30 mg/kg at the same time. Glabridin was given intragastric infusion administration 1h after intraperitoneal injection. The doses of these drugs were on the basis of previous studies and our preliminary experiments [17]. All the rats in each group were euthanized at the same time. The bloods and lung tissue specimens were collected at the prescribed time.

The wet/dry (W/D) ratio was assayed in the upper lobe of right lung to assess lung edema. The upper lobes of the right lung were excised and the wet weights were determined. Then, the lungs were placed in sterile non-enzyme tube. After incubated at 80°C for 72 hours to remove all moisture, the dry weights were measured and the W/D ratio were calculated.

The plasma and homogenate of the upper lobes of the left lungs was preserved in liquid nitrogen for the determination of different factors. The concentrations of TNF-α, IL-18, and SPA in plasma were detected using ELISA kit according to the protocol recommended by the manufacturer. MDA, SOD and NO levels in lung homegenate were respectively determined with methods of TBA, xanthine oxidase and nitric reductase.

The right lower lungs were collected and flushed by frozen saline, and fixed with 4% formaldehyde for 24 hours at 25°C. Then, the lung tissue blocks were routinely repaired, dehydrated and embedded. After stained with hematoxylin and eosin (H&E), pathological changes of the lung tissue were observed under a light microscope.

The lung tissue paraffin specimens underwent conventional dewaxing hydration and antigen retrieval for 12 minutes. 3% hydrogen peroxide was used to block endogenous peroxidase. 1:100 rabbit anti-rat p-p38MAPK and ERK protein kinase monoclonal antibody were added as the primary antibody for each group, then biotin-labeled secondary antibody. The negative control group was added with PBS instead of the primary antibody. The brown-yellow granules in the lung tissue were observed under a light microscope.

The lower lobes of the left lungs were preserved in liquid nitrogen until homogenization. Proteins content was measured using Coomassie brilliant blue staining. 80 g protein samples extracted from the lungs of each group were subjected to sodium dodecyl sulfate polyacrylamide gel electrophoresis (SDS-PAGE) in a 12% gel and transferred onto nitrocellulose membrane. The nitric acid film was sealed in 2% skimmed milk powder at 25°C. After washed in TPBS and labeled with horseradish peroxidase (HRP) and DAB chromogenic reagent kit, the density of the target bands on the membrane were scanned and analyzed by a gel imaging system (Aphla, American).

All values were expressed as mean values ± standard deviation(SD). Differences between the groups were analyzed by one-way analysis of variance (ANOVA), and paired specimen by T-test in SPSS 17.0 (SPSS Inc., USA). P values < 0.05 were considered to be statistically significant.