Formalin-fixed paraffin-embedded (FFPE) samples represent a valuable resource for clinical researches. However, FFPE samples are usually considered an unreliable source for gene expression analysis due to the partial RNA degradation. In this study, through comparing gene expression profiles between FFPE samples and paired fresh-frozen (FF) samples for three cancer types, we firstly showed that expression measurements of thousands of genes had at least two-fold change in FFPE samples compared with paired FF samples. Therefore, for a transcriptional signature based on risk scores summarized from the expression levels of the signature genes, the risk score thresholds trained from FFPE (or FF) samples could not be applied to FF (or FFPE) samples. On the other hand, we found that more than 90% of the relative expression orderings (REOs) of gene pairs in the FF samples were maintained in their paired FFPE samples and largely unaffected by the storage time. The result suggested that the REOs of gene pairs were highly robust against partial RNA degradation in FFPE samples. Finally, as a case study, we developed a REOs-based signature to distinguish liver cirrhosis from hepatocellular carcinoma (HCC) using FFPE samples. The signature was validated in four datasets of FFPE samples and eight datasets of FF samples. In conclusion, the valuable FFPE samples can be fully exploited to identify REOs-based diagnostic and prognostic signatures which could be robustly applicable to both FF samples and FFPE samples with degraded RNA.

The vast majority of clinical tissue samples are routinely fixed in formalin and embedded in paraffin (FFPE) blocks [1–3], and billions of FFPE samples are preserved in hospitals and tissue banks worldwide [4]. Given this wealth of archival clinical specimens from patients with precious clinical and follow-up data [5, 6], the medical research community has strong desire to exploit the FFPE samples to identify transcriptional diagnostic and prognostic biomarkers of tumors. However, FFPE preparation process and storage inevitably degrade RNA [2, 7–9], leading to RNA fragmentation ( up to 50% of which may not contain an intact poly-A tail) [7] and degradation with RIN (RNA Integrity Number) scores usually below three [10, 11]. This problem renders FFPE-isolated nucleic acids unsuitable for gene expression profiling experiments [6, 12] which usually require high-quality fresh-frozen (FF) tissues with RIN score of 6.0 or higher [13–15]. Therefore, FFPE samples are largely limited to immuno-histochemical (IHC) staining and RT-PCR experiments [5, 8, 16–20]. This makes a major limitation for transcriptional analysis when sufficient FF samples are unavailable [1, 21].

Another type of tumor signatures is based on the relative expression orderings (REOs) of genes within samples [35–38], which is highly robust against large measurement variations introduced by experimental batch effects [39–41]. In view of the high correlation between paired FF and FFPE expression profiles [11, 22–28], we reasoned that it would be possible that most of the stable REOs of gene pairs in FF samples could be maintained in the FFPE samples with partial RNA degradation. In this study, we confirmed this reasoning through comparing the REOs in FFPE samples with the REOs in the corresponding paired FF samples obtained from the same patients. Lastly, as a case study to demonstrate the robustness of REOs-based signatures, we developed a REOs-based signature from FFPE samples to distinguishing liver cirrhosis from hepatocellular carcinoma (HCC) and validated this signature in both FF samples and FFPE samples with degraded RNA. 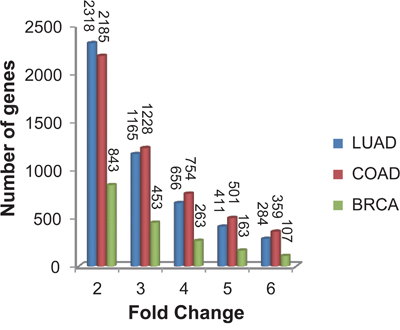 In addition, the three lists of DEGs for the three types of cancer had 1205 overlaps, among which 99.17% had consistent up- or down-deregulation directions in the FFPE samples compared with the FF samples across the three cancer types (binomial test, P-value < 1.0E-16). This result indicated that the genes affected by the RNA degradation were largely independent of the tissue types.

The robustness of the REOs against RNA degradation in FFPE samples

Using the above FF and FFPE paired samples for LUAD, COAD and BRCA, we evaluated the consistency of REOs of gene pairs between every paired FF sample and FFPE sample extracted from the same patient. 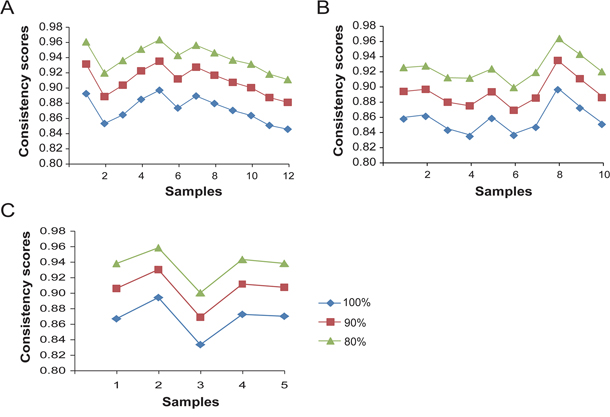 Figure 2: The consistency scores of REOs of gene pairs between every FFPE sample and its paired FF sample. The consistency scores between every paired FFPE and FF samples after excluding zero, 10% and 20% gene pairs with the smallest expression differences in each of the FF samples for lung adenocarcinoma A., colon adenocarcinoma B. and breast invasive cancer C.

Table 2: The influence of the storage time on REOs of gene pairs in FFPE samples

Note: Gene A has a higher expression level than Gene B in liver cirrhosis.

Table 4: The prediction sensitivity scores of the signature in the validation datasets

On the other hand, our analyses also showed that the REOs of some gene pairs, especially those gene pairs with small expression differences in FF samples, were not maintained in their paired FFPE samples, indicating that the influence of RNA degradation on some genes’ expression levels in the FFPE samples might be too large to remain their REOs in the FF samples. This result also suggested that subtle quantitative information of gene expression measurements of FFPE samples are unreliable, whereas the seemingly disadvantage of REOs analysis without using some subtle quantitative information of gene expressions is in fact a unique advantage. Especially, we could choose gene pairs with larger expression differences to develop robust REOs-based signatures, excluding gene pairs with small expression differences which tend to be unstable due to random variations of measurement [43]. This strategy would keep sufficient information for prognostic signature detection due to the widely correlated prognostic gene expressions [55]. In general, the subtle quantitative information of gene expression measurements are quite error-prone and uncertain due to various technical artifacts or ‘batch effects’ introduced by the differences in reagent lots, reaction conditions and operators [56–60]. Data normalization methods, such as Combat [61], DWD [57] and XPN [62], could distorts real biological signals [63]. In contrast, the REOs of gene pairs within samples are insensitive to experimental batch effects and data normalizations [64, 65] and thus could provide more accurate and robust patient-specific information for clinical applications [38]. In facts, prognostic signatures based on within-sample REOs have be successfully identified and validated for breast cancer [35, 37, 66, 67], lung cancer [68] and hepatocellular carcinoma [39]. Nevertheless, as shown in this study, that RNA degradation can affect some REOs of genes in FFPE samples in our analyses, it is still necessary to develop new technologies for RNA extraction protocols, RNA amplification and labeling methods to enhance the transcriptome data quality from FFPE samples [25, 28, 69–71]. Especially, because measurement of low levels of gene expression in FFPE samples by RT-qPCR is feasible, it is desirable to develop RT-qPCR kit for translating the REOs-based signatures to clinical applications.

In summary, the REOs-based method will enable gene expression analysis of FFPE samples with RNA degradation that are widely stored in pathology archives around the globe.

All gene expression data analysed in this study were downloaded from the GEO (http://www.ncbi.nlm.nih.gov/geo/) [72], ArrayExpress (http://www.ebi.ac.uk/arrayexpress/) [73] and TCGA (http://cancergenome.nih.gov/), as described in detail in Table 1. For the mRNA-seq profiles of level 3 in TCGA, we removed those genes with zero expression values in both FF and FFPE samples and the remained 20031, 20201 and 20029 genes were analyzed for lung adenocarcinoma, colon adenocarcinoma and breast invasive cancer samples, respectively.

For the data measured by the Affymetrix platform, the Robust Multi-array Average algorithm [74] was used to do background adjustment for the raw mRNA expression data (.CEL files). For the data measured by the Illumina platform, we directly downloaded the processed data. For the data measured by the Agilent platform, we downloaded the raw fluorescent signal intensities data of the channel (gMedianSignal or rMedianSignal) for normal samples and used the intensities to minus the corresponding background signal intensities as the probe-expression matrix. Each probeset ID was mapped to Entrez gene ID with the platform file. If a probeset was mapped to multiple or zero gene, then the data of this probeset was deleted. If multiple probesets were mapped to the same gene, the expression value for the gene was defined as the arithmetic mean of the value of multiple probesets.

All the genes in a sample are ranked according to their expression levels in ascending order. Pairwise comparisons are performed for all genes in each FF sample. Then, we calculated the rank difference for each gene pair in each FF samples by the equations as following:

Ri and Rj represent the ranks of gene i and j in FF sample, respectively, and Rij is the absolute rank difference between the two genes. The gene pairs with the smallest Rij were considered to have closest expression levels.

For a particular tissue, pairwise comparisons were performed for all genes to identify gene pairs with stable ordering in accumulated normal samples from different data sources. For each gene pair (Gi, Gj), being viewed as an event with only two possible outcomes (Gi>Gj or Gi<Gj), the gene pairs which the expression level of Gi was higher (or lower) than that of Gj in more than 99% of accumulated normal samples were defined as highly stable gene pairs.

Developing a REOs-based signature to distinguish liver cirrhosis from HCC

Firstly, a gene pair (Gi and Gj) was selected when its REO, Gi > Gj in expression level, was identical in more than 85% of the liver cirrhosis samples, and was reversed (Gi <Gj) in more than 85% of the HCC samples. After selecting all such reversal gene pairs, we calculated the rank difference for each gene pair in each of the HCC or liver cirrhosis samples.

Let mean and mean represent the means of absolute rank differences of the gene pair (i, j) in all liver cirrhosis samples and all HCC samples, respectively. Then, we calculated the geometric mean of the mean and the mean to evaluate the reversal degree of the gene pair. The larger this geometric mean, the larger reversal degree of the REO for the two genes between the liver cirrhosis and HCC samples.