Methods: A total of 702 patients in seven hospitals with 4–10 and 10–50 ng/mL PSA, respectively, who had undergone transrectal ultrasound-guided prostate biopsies, were assessed. Analysis-modeling stage for several clinical indexes related to prostate cancer and renal function was carried out. Multiple logistic regression analyses were used to develop new risk assessment models of prostate cancer for both PSA level ranges 4-10 and 10-50 ng/mL. External validation stage of the new models was performed to assess the necessity of biopsy.

Prostate cancer (PCa) is the most common cause of cancers in the Western population [1]. Although its incidence is lower in Asia, the relatively higher mortality rates and asymptomatic clinical features make early detection to remain a critical public health goal [1–5]. Transrectal ultrasound (TRUS)-guided prostate biopsy is currently the ‘gold standard’ for PCa diagnosis [6]. Nevertheless, there is a growing concern regarding the increasing incidence of serious infections, hematuria, hematospermia and bloody stool after biopsy [7].

Conventionally, the level of prostate-specific antigen (PSA), a serine protease secreted by prostate epithelial cells, determines whether a prostate biopsy should be performed [8]. However, the low sensitivity and specificity of PSA give rise to unnecessary biopsies, especially for patients with PSA ranging from 4 to 10 ng/mL, the so called “gray zone” [9–11]. In 2012, Wang et al. found TRUS-guided prostate biopsy positive diagnosis rates of 12.1%, 31.1%, 48.0% and 91.2% for PSA levels of <10, 10–20, 20–50 and >50 ng/mL group, respectively, in a cohort of Chinese patients [12]. Due to financial reasons, North Chinese individuals do not have so strong health examination consciousness as western people. They generally do not visit a doctor until they show lower urinary tract symptoms, which may account for the higher PSA level but lower positive diagnostic rates. Thus, the gray zone can be expanded to 4–50 ng/mL in North Chinese patients.

This study assessed clinical indexes in North Chinese patients with PSA levels of 4–10 and 10–50 ng/mL, respectively, who underwent biopsies. Then new risk assessment models of prostate cancer (RAM-PCa) were developed. These new models helped further formulate a reasonable follow-up strategy to overcome the limitations of PSA and the lack of health screening awareness. These findings might help increase PCa detection rates and reduce unnecessary prostate biopsies in North Chinese patients.

Table 1: Characteristics of patients with 4-10 ng/mL PSA in the analysis-modeling stage

Table 2: Characteristics of patients with 10-50 ng/mL PSA in the analysis-modeling stage

Six indexes above remained in the logistic analysis with a backward elimination selection procedure, and constructed an equation for RAM-PCa.

Six indexes above remained in the logistic analysis with a backward elimination selection procedure, and constructed an equation for RAM-PCa.

Figure 1: Nomogram of the RAM-PCa for the PSA 4-10 ng/mL group for predicting a positive prostate biopsy. Individual values were placed on each variable axis to obtain the corresponding point on the ‘Point’ axis. The sum of these points was projected to the ‘Total Points’ axis to determine the probability of prostate cancer on the ‘RAM-PCaR’ axis.

Figure 2: Nomogram of the RAM-PCa for the PSA 10-50 ng/mL group for predicting a positive prostate biopsy. Individual values were placed on each variable axis, to obtain the corresponding point on the ‘Point’ axis. The sum of these points was projected to the ‘Total Points’ axis to determine the probability of prostate cancer on the ‘RAM-PCaR’ axis. 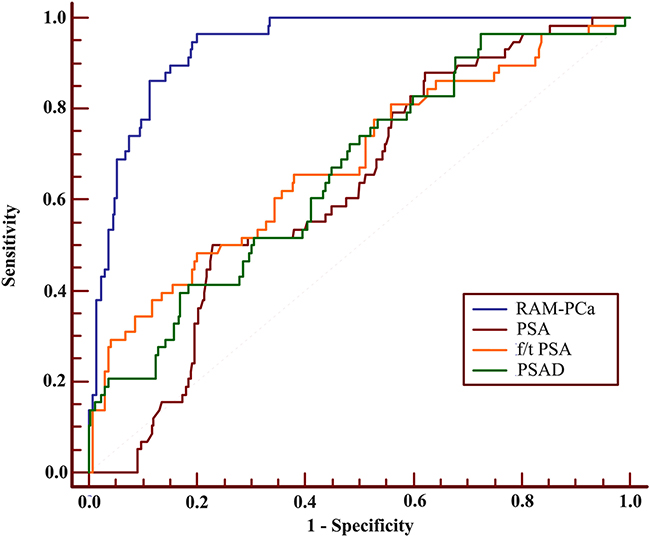 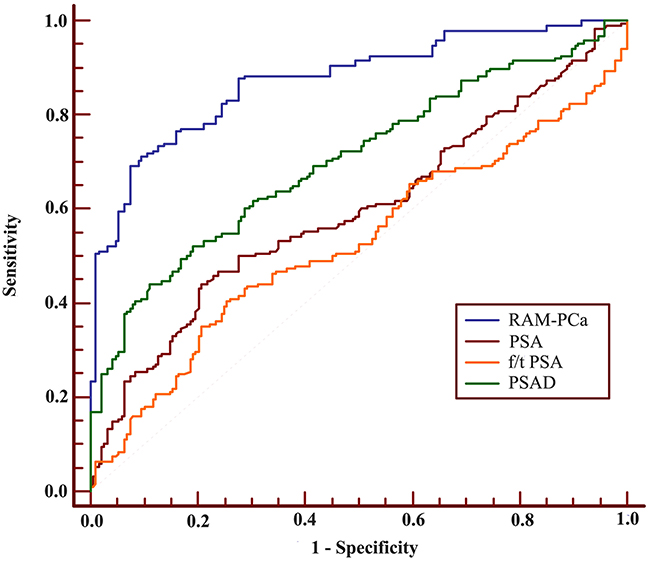 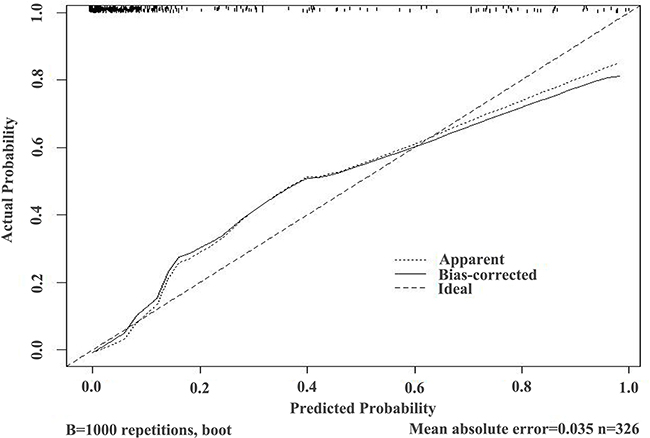 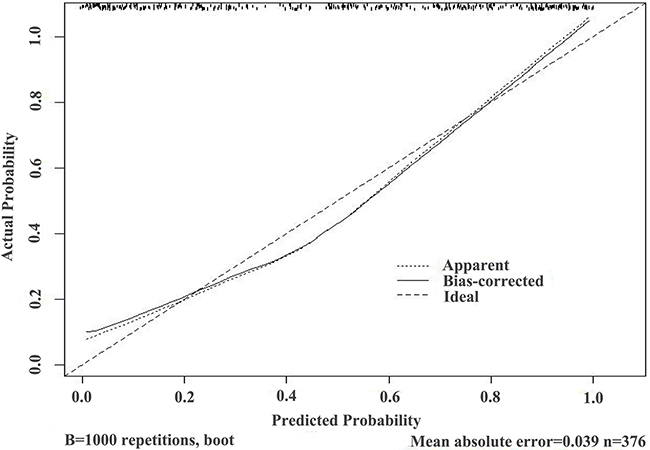 Table 7: Comparison of patient characteristics in two stages for the PSA 4-10 ng/mL group

#: The positive rate was discussed in high-risk patients in stage 2.

Table 8: Comparison of patient characteristics in two stages for the PSA 10-50 ng/mL group

#: The positive rate was discussed in high-risk patients in stage 2.

Beside PCa, there are other physiological conditions, including benign prostatic hyperplasia, inflammation, infection, and trauma that increase PSA levels [8–11]. This could lead to unnecessary biopsies and over-diagnosis as well as over-treatment of PCa, causing pain, infection, bleeding, urinary obstruction, emotional distress and a waste of medical resources [13, 14]. Measures have been taken to reduce excessive biopsies in Western countries, including the addition of new predictive indexes such as [-2]proPSA (p2PSA), prostate health index (PHI), and prostate cancer antigen 3 (PCA3), to PSA screening models [11, 15, 16]. However, screening these new indexes on a large scale remains challenging for China. On the other hand, well-known models, such as prostate cancer prevention trial (PCPT) and European randomized study of screening for prostate cancer (ERSPC), based on Western populations, are not suitable for Chinese males owing to the overestimation of PCa risk due to population heterogeneity [17–20].

Instead of regular PSA checkups, Chinese individuals are usually examined for PSA when they have lower urinary tract symptoms, i.e., some individuals with high PSA levels but no serious lower urinary tract symptoms might not participate in PSA screening programs. This may account for the low positive diagnostic rate in the Chinese population at the same PSA level. In this study, the positive diagnosis rate of PSA 4–10 ng/mL was 17.79% while that of PSA 10–50 ng/mL was 50.00%. Thus, the gray zone could be expanded significantly from PSA 4–10 ng/mL to PSA 4–50 ng/mL among North Chinese individuals.

For retrospective study, creatinine acted as a protective factor in PSA 4-10 ng/ml group. Indeed, compared with the PCa group, the Non-PCa group had larger average prostate volumes (57.67 vs 53.28, p=0.018, Table 1), which might reflect more serious lower urinary tract symptoms, causing renal function impairment at a certain level. Current conventional assays show a positive correlation between blood creatinine and kidney damage [21]. Moreover, it can be concluded that PSA plays a more significant diagnostic role in patients with 10–50 ng/mL PSA, while f/t PSA and PSAD show obvious differences between the PCa and Non-PCa groups for individuals with 4–10 ng/mL PSA. This characteristic was in line with the Guidelines on Prostate Cancer of European Association of Urology using f/t PSA and PSAD to evaluate whether a prostate biopsy should be performed in the ‘grayzone’, PSA 4–10 ng/mL. And our previous study suggested that PSA other than PSAD, remained valuable predictor of the pathologic stage of PCa [22]. Thus, further study could be done to investigate the new model using PSA as well as other clinical indexes to predict the pathologic stage of PCa.

This study included 973 patients from January 2010 to July 2016 from seven hospitals across North China, with a population accounting for 25% of the whole country. In addition to the large-scale and multiple institutional sampling, this study expanded the gray-zone from PSA 4–10 ng/mL to PSA 4–50 ng/mL for North Chinese individuals. Thus, a widespread application of the current findings can be made, significantly reducing the unnecessary biopsies for such regions, where the economic foundation, cultural basis, and health awareness are not strong. Moreover, creatinine showed obvious statistical differences between the PCa and Non-PCa groups in 4-10 ng/mL PSA model and was absorbed in risk assessment models at the first time.

The study had several limitations. First, the total number of patients, 702 patients for analysis-modeling stage and 271 for external validation stage, was relatively small. In addition, prostate volumes were measured by MRI, with potential errors in the calculated outcome of volume formulation. Thirdly, the RAM-PCa receiver operating characteristic curve (ROC) for the PSA 10-50 ng/mL group showed lower sensitivity compared with that of the PSA 4-10 ng/mL group (71.28% vs 96.55%), indicating that a certain number of individuals would be misdiagnosed. However, larger sample size, more definite group and additional correlated indexes are being assessed by our team in order to establish a more convincing model in the future.

This stage included 702 patients, with 326 and 376 in the PSA 4–10 ng/mL and 10–50 ng/mL groups, respectively. The patiens underwent TRUS-guided conventional systemic 12-core biopsy, in addition to a special core, derived from hypoechoic lesions in ultrasound, hypointense lesions in magnetic resonance imaging or the prostatic apex. According to biopsy pathology, each group was divided into two subgroups, PCa and Non-PCa. Basic clinical indexes, including age, PSA, fPSA, f/tPSA, DRE, PV (obtained by MRI of the prostate, as PV = 1/6 ×π× transverse diameter × anteroposterior diameter ×cephalocaudal diameter), PSAD, two renal function indexes [BUN and creatinine], HL-TAUS, HL-MRI, and BTEP-MRI were collected. Then differences in the above indexes between the PCa and Non-PCa groups were assessed by Student’s t-test, rank-sum test, chi-square test, or Fisher exact probability test. Multiple logistic regression analyses using a backward elimination selection procedure were applied to build risk assessment models followed by the appraisal of diagnostic efficiency (ROC) and accuracy (validation curve). Furthermore, the normograms assisted in predicting biopsy outcome, visually and intuitively.

In this stage, 271 patients were prospectively evaluated, including 105 and 166 with PSA levels of 4–10 ng/mL and 10–50 ng/mL, respectively, using the newly developed models. Based on the comparison between the cutoff values of ROC and the individual values calculated from the RAM-PCa equation, patients were classified into high-risk and low-risk groups, respectively. High-risk patients were advised to undergo prostate biopsies, and low-risk group was advised to undergo continuous observation. Finally, biopsy rates and other common indexes were assessed between the two stages, while the detection rate of PCa was compared between first stage groups and the high-risk group in the second stage.

Statistical analyses were carried out with the SPSS 19.0 software, R software version 2.15.0, and MedCalc software version 11.4.2.0. Differences in patient characteristics were analyzed by Student’s t-test for continuous variables with a Gaussian distribution, rank-sum test for continuous variables with non-normal distribution, and chi-square test or Fisher’s exact probability test for categorical variables. After selecting potential predictive factors, multiple logistic regression analyses with a backward elimination selection procedure were used to develop the new risk assessment models. ROC curves were used to evaluate the efficiency of the models and those of other indexes such as PSA, f/tPSA, and PSAD. The Hosmer-Lemeshow test using the concordance index on 1000 bootstrapped samples was employed for the validation of the new models.

Overall, we developed new models to assess whether TRUS-guided prostate biopsy should be performed in North Chinese patients with PSA level ranges 4 and 50 ng/mL. In addition, we developed a follow-up strategy for such regions lacking new PCa screening methods and health examination awareness. The current findings could help reduce the number of unnecessary prostate biopsies, also increasing the detection rate of PCa without delaying diagnosis and treatment for North Chinese patients.

The institutional review board of Shandong Provincial Hospital Affiliated to Shandong University approved the present study. Written informed consent was obtained from all patients with regard to information storage for research purposes.