Podocalyxin-like protein (PODXL), an important transmembrane glycoprotein belonging to the CD34 family [1], is usually expressed on the apical surface of podocytes and glomerular epithelial cells [2]. However, it also expressed by breast epithelium [3], vascular [4] and haematopoietic progenitors [5]. The main function of PODXL was regulating the cell morphology and adhesion by the connections between the intracellular proteins and extracellular ligands [6–8].

Recently, several studies indicated that PODXL might be a predictor of prognosis in various cancers, such as colorectal cancer (CRC) [9–12], pancreatic cancer (PC) [13–15], glioma [16], esophageal and gastric adenocarcinoma (EGAC) [17, 18], urothelial bladder cancer (UBC) [19], breast cancer (BC) [20] and so on. The role of PODXL in tumorigenesis remains unclear, but it has been demonstrated to promote the tumor growth, invasion and metastasis [21, 22].

As shown in Figure 1, a total of 382 papers were identified and 46 duplicative papers were excluded. As for the remaining 336 papers, 312 were excluded by scanning the titles or abstracts. For the 24 potentially associated studies remained, the full-texts were carefully read. Among these 24 studies, 4 were excluded for insufficient datum to assess the HR of prognosis outcomes, and 7 were excluded for not focusing on the topic, and 1 were excluded because the included patients were covered in the other one study. At last, 12 studies involved 5,309 patients were eligible for this meta-analysis [9–20]. 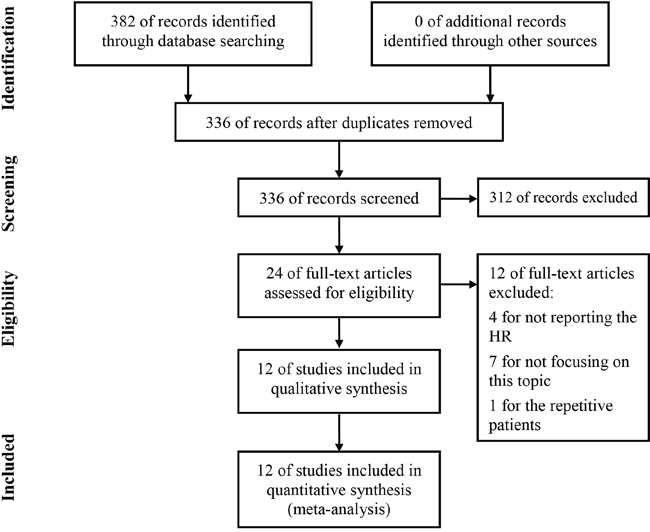 Seven studies containing eleven cohorts were included into the pooled analysis. As shown in Figure 2, no obvious heterogeneity was detected (I2=41%, p=0.08), and fixed-effect model was used. The results presented that PODXL expression was distinctly associated with the OS (HR=1.76, 95%CI=1.53-2.04, p<0.00001), which indicated that high PODXL expression predicted worse OS compared to the low PODXL expression. In additions, the influence analysis was carried out and no decisive effect of included studies was observed (Supplementary Figure S1), and no significant bias among all included studies was detected by funnel plot (Supplementary Figure S2).

Four studies reported the DSS or CSS and were enrolled into the meta-analysis of DSS. As shown in Figure 3, in view of the obvious heterogeneity (I2=66%, p=0.03), the random-effect model was applied. And the results indicated that high PODXL expression was evidently correlated with the shorter DSS in cancers (HR=2.47, 95%CI=1.53-3.99, p=0.0002). Besides, no decisive effect was observed according to the influence analysis (Supplementary Figure S3), and no significant bias among all included studies was detected by funnel plot (Supplementary Figure S4).

Two studies reported the TTR, three studies reported the DFS, one study reported the PFS and two studies reported the RFS. However, the study conducted by Forse et al was excluded for the apparent increase of heterogeneity (I2= 19% and I2=76%, respectively). The study conducted ty the Larsson et al 2012 both covered the TTR and DFS, and the DFS was extracted and enrolled into the meta-analysis. Therefore, five studies including six cohorts were included into the meta-analysis of DFS. As shown in Figure 4, there was no obvious heterogeneity among the included studies (I2=19%, p=0.29). It was shown that high PODXL expression predicted shorter DFS when compared with the low PODXL expression in various cancers (HR=2.12, 95%CI=1.58-2.85, p<0.00001). In additions, no decisive effect was observed according to the influence analysis (Supplementary Figure S5), and no publication bias among all the included studies was detected by funnel plot (Supplementary Figure S6).

Increasing evidences showed that PODXL expression was associated with prognosis in various cancers [9–20]. Furthermore, plenty of studies demonstrated that PODXL played a key role in the formation of primary tumors growth and metastasis [21, 22]. And Lin et al covered that PODXL might promote tumor formation and metastasis by activating the Rac1/Cdc42/cortactin signaling [23]. Thomas et al reported that PODXL is an E-/L-selectin ligand on colon carcinoma cells [7]. Therefore, more and more researchers focused on the role of PODXL in cancers. Nevertheless, the prognostic role of PODXL expression in cancers was controversial.

The highlighted strength of our study as follows: First, to the best knowledge of us, the study was the first systematic review and meta-analysis to explore the prognostic role of PODXL expression in various cancers, and the results contributed to the development of the research concerning the prognostic role of PODXL in cancers. Second, twelve studies with a relatively large population were finally included, hence, the results were convincing. Third, the comprehensive subgroup analyses were carried out, such as ethnicity, antibody type, tumor type and so on. Fourth, no obvious heterogeneity was observed in the meta-analysis of OS and DFS, therefore, the pooled effects were accurate.

Furthermore, several limitations of our study should be carefully considered. First, the conclusion of some tumors should be used with caution for the limited included studies, such as BC, glioma and so on. Second, the data was obtained from the published articles, so the individual data was unavailable. Third, the heterogeneity remained significant in the meta-analysis of DSS. And the accuracy of the results might be reduced for the use of random-effect model. Fourth, moderate publication bias might be existed for the reason that the researchers tended to report the positive results.

The studies meeting all the criteria should be included: 1) prospective or retrospective studies; 2) paying attention on the role of PODXL expression on the prognosis in various cancers; 3) enough data to get the hazard ratio (HR) for prognostic outcomes, along with their 95% confidence intervals (CIs) or p values; 4) studies published in English.

The exclusion criteria were as follows: 1) neither the prospective nor retrospective studies; 2) studies without enough data to get the HR; 3) studies not focusing on the role of PODXL expression on the prognosis in various cancers; 4) not published in English.

All the manuscripts were independently reviewed by two investigators (Zhao Y and Wang J). The following data were carefully abstracted: first name of the first author, year of publication, country of the study, ethnicity, the numbers of patients, percentage of males, tumor type, survival outcomes, analysis model and antibody type. The HRs of prognostic outcomes obtained directly or indirectly from published articles were integrated in the meta-analysis according to the study conducted by Tierney et al [24]. If the multivariate analysis and univariate analysis were both applied in the study, the HR assessed with multivariate analysis was abstracted. If the PODXL was stained both by polyclonal antibody and monoclonal antibody, the datum of the former were extracted. Any disputes were discussed with the third investigator (Qi X).

Meta-analysis was carried out by Review Manager Version 5.3 software. The prognosis outcomes were assessed using the HR, along with the corresponding 95% CI or p values. The prognosis outcomes mainly contained the OS, disease-specific survival (DSS), DFS, cancer-specific survival (CSS), progression-free survival (PFS), time to recurrence (TTR) or RFS. The heterogeneity was assessed by Cochran’s Q test and Higgins I2 among included studies. And the heterogeneity should be considered when p< 0.05 and/or I2 > 50%, and the random-effect model was applied; if not, the fixed-effect model was used. Besides, the funnel plot was conducted to evaluate publication bias by Review Manager Version 5.3 software. The sensitivity analysis was conducted by Stata 12.0 to access the robustness of the results. p < 0.05 meant the correction was significant.