Expression analysis of microRNA as prognostic biomarkers in colorectal cancer

microRNA (miRNA) based biomarkers have unique advantages due to their critical regulatory function, superior stability, and relatively small number compared to mRNAs. A number of miRNAs play key roles in colon cancer stem cell chemoresistance and have clinical potential as prognostic biomarkers. The purpose of this study is to systematically validate the prognostic potential of miRNAs in colorectal cancer. In this study, we validated the prognostic potential of a panel of miRNAs using 205 stage II, III, and IV colorectal cancer specimens by qRT-PCR analysis. We cross validated our results using The Cancer Genome Atlas (TCGA) database. Many of the miRNAs we investigated have been functionally validated to be important in contributing to chemoresistance to 5-fluorouracil (5-FU) based chemotherapy. We determined that miR-16 is the most consistent miRNA for expression normalization in colorectal cancer. We have validated several miRNAs (miR-15b, miR-215, miR-145, miR-192, let-7g) that are significantly associated with progression free survival (PFS) and/or overall survival (OS) of colorectal cancer patients independent of tumor stage and age at diagnosis. These 5 miRNAs are significantly associated with OS of colorectal cancer even after tumor location (left side vs. right side) is adjusted for. Furthermore, the prognostic value of let-7g for overall survival was independently validated using the RNA-Seq results from TCGA colorectal cancer database. These results, taken together, establish a solid foundation towards miRNA based precision management of colorectal cancer.

Recently, it has been recognized that epigenetic changes play a key role in tumorigenesis and resistance to chemotherapy [2, 3]. Resistance to 5-fluorouracil (5-FU) based chemotherapy is the major reason for failures in treating advanced colorectal cancer. Colorectal cancer cells are highly heterogeneous, chemotherapy can be quite effective in eliminating most of the rapidly proliferating cancer cells. However, a small population of slow proliferating, cancer stem cells, is highly resistant and leads to recurrence [4]. Although the mechanism of chemoresistance to 5-Fluorouracil (5-FU) is complex and is often associated with elevated 5-FU target enzyme thymidylate synthase (TS, TYMS) [5, 6], recent studies have shown that epigenetic alterations such as non-coding miRNAs are major contributors to resistance mechanisms to 5-FU. miRNAs regulate acute changes in protein synthesis at the post-transcriptional and translational levels [3, 7–12].

In this study, we systematically validated the prognostic potential of candidate miRNAs in stage II, III and IV colorectal cancer. We quantified expression of a panel of 11 miRNAs (Let-7g, miR-15a, miR-15b, miR-21, miR-140, miR-143, miR-145, miR-181b, miR-192, miR-200, miR-215) selected based on their critical functions in chemoresistance and cell death in colorectal cancer as well as several profiling studies [21, 22]. We also quantified four housekeeping genes (RNU44, 5S, β-actin, miR-16) to determine the best housekeeping gene for normalizing of miRNA expression. Our results show that the best housekeeping miRNA for normalization is miR-16. We discovered several significant miRNAs (miR-15b, miR-215, miR-145, miR-192, let-7g) as prognostic biomarkers of OS that are independent of tumor stage and age at diagnosis. It has been demonstrated that the primary tumor location is an important prognostic factor in metastatic colorectal cancer [23–26]. We also analyzed the prognostic potential of these miRNAs by taking into account the primary tumor location being left side or right side. Our results show that let-7g is significantly associated with OS with independent validation using TCGA colorectal cancer datasets. 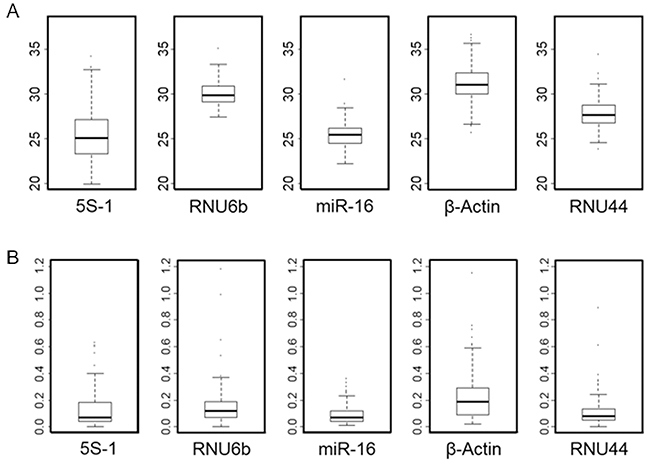 Table 1: Estimated association between miRNA and overall survival/progression free survival after adjusting for stage, age at diagnosis based on PCR data

Table 2: Estimated association between miRNA and overall survival/progression free survival after adjusting for stage, age at diagnosis and tumor location based on PCR data (N=187)

To further validate the results, we used our own data as the experimental set, and we analyzed the miRNA expression with patient survival by using TCGA colorectal cancer data as a validation set. Our results show that TCGA data is highly consistent with our results generated from patient samples at Stony Brook University Medical Center (Table 3). The expression levels of let-7g, miR-15a, miR-200 and miR-181 were significantly associated with OS of stage II/III/IV patients before and after considering tumor location. The representative Kaplan-Meier OS survival curves of let-7g based on our data and TCGA data for different patient groups are shown in Figure 2. The expression levels of let-7g, miR-21, miR140, miR143, miR-181, miR-192, and miR-215 are significantly associated with stage III/IV patient’s OS. Low expression of miR-15b was associated with better OS in stage III/IV patients, but this did not achieve statistical significance after considering tumor location. Among stage II patients, findings from our data were also confirmed by TCGA data while additional miRNAs were shown to be significantly associated with stage II patients’ OS such as let-7g, miR-15a, miR-140, miR-192 and miR-200.

Table 3: Estimated association between miRNA and overall survival after adjusting for stage, age at diagnosis based on TCGA colorectal cancer data 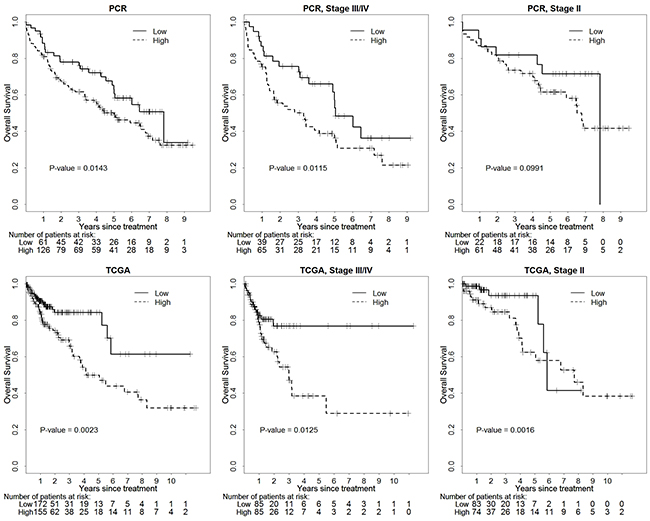 In this study, we evaluated the prognostic potential of miRNAs in colorectal cancer based on 200 patient samples with clinical outcome follow up information. We have also systematically validated the housekeeping controls that can be used for miRNA expression normalization in colorectal cancer. Our findings are consistent with previous reports that RNU44 and miR-16 are two genes with the least expression variation in colorectal cancer [9, 27]. We chose miR-16 as the housekeeping miRNA for this study as it has a relatively higher level of expression than RNU44 with the best standard deviation (Figure 1). miR-16 has been shown to be the ideal housekeeping candidate in breast cancer and pancreatic cancer [28, 29]. Our results are also consistent with previous studies that miR-16 is a suitable housekeeping miRNA in colon cancer [27]. We show that miR-15a and miR-15b are significantly associated with colorectal cancer patient’s survival (Table 1 and 2). This is in contrast to CLL in which a cluster containing miR-15 and miR-16 is deleted from 13q14 [2]. There might be unique differential processing of miR-15 and miR-16 in solid tumors such as breast cancer, pancreatic cancer and colorectal cancer. As miR-15a/16-1 cluster is located in chromosome 13 while miR-15b/miR-16-2 is located in chrosomsome 3. Identification and utilization of the proper housekeeping gene is one of the most important factors for any biomarker study as the housekeeping gene used for miRNA expression normalization is often times different in unique tumor types.

There are a number of advantages to using miRNA as biomarkers. miRNAs are relatively stable in archival FFPE samples which makes them superior to degraded mRNAs [15]. This allows for large scale retrospective studies using archival FFPE specimens. In addition, their aberrant expression may be indicative of the disruption and dysregulation of multiple cellular networks.

One of the novel and significant aspects of this study is to take colorectal tumor location into consideration. This has never been investigated in conjunction with the expression of miRNAs in colorectal cancer. Previous studies have shown that primary tumor location (left vs. right) is a significant prognostic factor in metastatic colorectal cancer [23]. When we include primary tumor location as a factor with miRNA expression, we show that let-7g, miR-15b, miR145, miR-200, and miR-215 are still significantly associated with patient’s OS. This is highly consistent with our previous studies that let-7g is closely associated with colon cancer chemoresponse [16]. We have also shown that miR-200 has prognostic potential in colorectal cancer, which is consistent with previous studies [9]. It is well established that miR-200 plays key roles in EMT by regulating Zeb1 expression [31].

We further cross validated the findings based on colorectal cancer patients from Stony Brook University Medical Center with colorectal cancer TCGA database containing RNA-Seq expression data for all miRNAs [32]. Based on TCGA miRNA dataset with tumor location information, we were able to show that let-7g, miR-140, miR-200, miR-192, miR-181 remained highly significant prognostic factors for metastatic colorectal cancer independent of tumor stage. Our results are also consistent with some of the miRNA based colorectal cancer biomarker studies [21, 33]. Let-7g is the most consistent prognostic biomarker between the Stony Brook University Medical Center Cohort and TCGA (Figure 2). Patients with low expression of let-7g have better survival compared to the group of patients with high expression. This is in contrast to the general notion that let-7g has a tumor suppressor role. We reason that this may be due to the fact that tumor cells in patients with lower let-7g levels may have a more rapid proliferation rate, making them more sensitive to 5-FU and oxaliplatin based DNA damaging agents used in colorectal cancer chemotherapy. This is in fact consistent with another tumor suppressive miRNA, miR-215, as patients with low expression have improved survival compared to patients with higher expression [17].

We selected 205 colorectal cancer specimens from patients who underwent surgical resection of primary tumors at the Stony Brook University Medical Center, Stony Brook, NY, USA. Patient consent forms were obtained from each patient according to institutional policies. Patient clinical information was provided by the Cancer Registry of Stony Brook University Medical Center, and the characteristics of these patients are shown in Table 4. Among these, we have 89 cases of stage II, 86 cases of stage III and 30 stage IV colorectal cancer patient archival formalin fixed paraffin embedded (FFPE) tissue specimens. Representative tissue blocks from each case were assembled from the archival collections of the Department of Pathology, and used for subsequent analysis. 200 patients had both follow-up information and miRNA expression information and 187 patients had tumor location information available.

The reverse transcription of miRNAs to cDNAs were conducted using TaqMan miRNA RT kit from Thermo Fisher Scientific (Life Technologes) by combining primers for different miRNAs using 40 ng of purified total RNA. Multiplex qRT-PCR reactions were performed using the Thermo Fisher Scientific (Applied Biosystems Inc.) 7900HT Fast Real Time PCR Detection System with 95 °C for 10 min, then 40 cycles of 95 °C for 15 seconds, 60 °C for 60 seconds. miRNA level was analyzed with its specific primers and internal housekeeping control miR-16. Fluorescent signals from each sample were collected at the endpoint of every cycle, and the expression level of each unique miRNA was calculated by ΔΔCT values based on the internal controls, normalized to control group and plotted as relative value (RQ).

This study was supported by the funding from the National Institute of Health R01CA155019 (Ju), R01CA197098 (J. Ju), and NMS Labs (J. Ju). We acknowledge the biostatistical consultation and support from the Biostatistical Consulting Core at the School of Medicine, Stony Brook University.