Esophageal cancer (EC) remains one of the most fatal cancers worldwide with its incidence on the rise [1]. In 2015, EC had affected over 478,000 people across China and almost 375,000 had succumbed to this disease [2]. China alone accounts for more than 70% of EC worldwide, and 95% is esophageal squamous cell carcinoma (ESCC), which has poorer biological behavior than esophageal adenocarcinoma (EAC) [3]. Despite clinical advances in radiochemotherapy and target therapy, ESCC remains one of the leading causes of cancer-associated mortality, with 5-year survival rate no better than a mere 20%[1]. More recently, given the discovery of drugs able to interfere with specific immune checkpoints, cancer immunotherapy has entered into a new era and may be a novel strategy for the future ESCC treatment [4]. Considering the clinical benefit-risk of immunotherapy, useful biologic markers for assessing risk of ESCC progression are urgently needed.

Immune evasion has been recognized as an important factor of cancer progression [5]. Programmed death 1 (PD1, CD279) is important in regulating immune tolerance by inhibiting T or B cell activation. PD1 has two ligands: PD-Ligand1 (PD-L1, CD274, B7-H1) and PD-Ligand2 (PD-L2, B7-DC, CD273) [6]. PD-L1 has a much broader tissue distribution than PD-L2. PD-L1 is expressed not only on haematopoietic cells, but also on parenchymal cells. And PD-L1 appears to be the major ligand expressed in solid tumors and is frequently upregulated in human cancers [7]. There are two mechanisms of PD-L1 expression on tumor cells: 1) through genetic alterations or activation of certain signaling pathways (intrinsic immune resistance), 2) through an induced response to inflammatory signals (adaptive immune resistance) [8-10]. The inducible expression seems to be more common than the constitutive expression in most cancer. With this expression pattern, PD-L1 is adaptively induced as a consequence of the presence of tumor antigen-specific T cells, and these cancer cells expressed PD-L1 and turned off the specific cytotoxic immune response, which contributes to immune evasion and facilitates tumor growth [11, 12]. 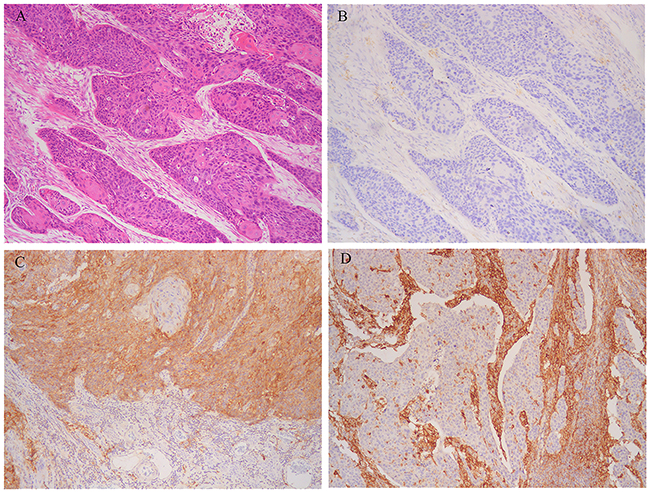 Survival analyses in the cohort of ESCC patients

Survival analyses based on clinical stage 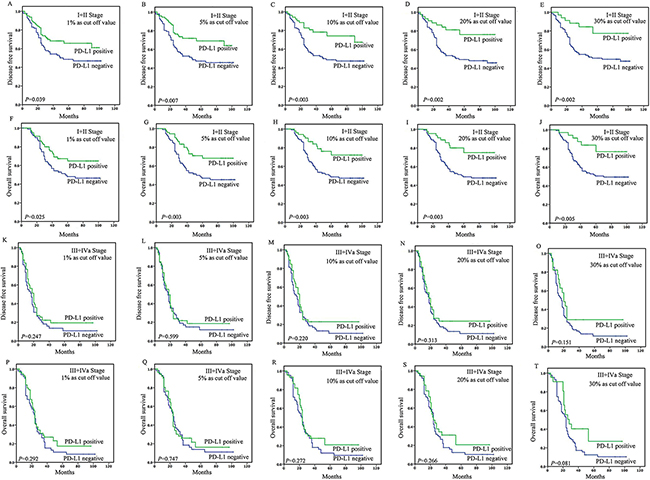 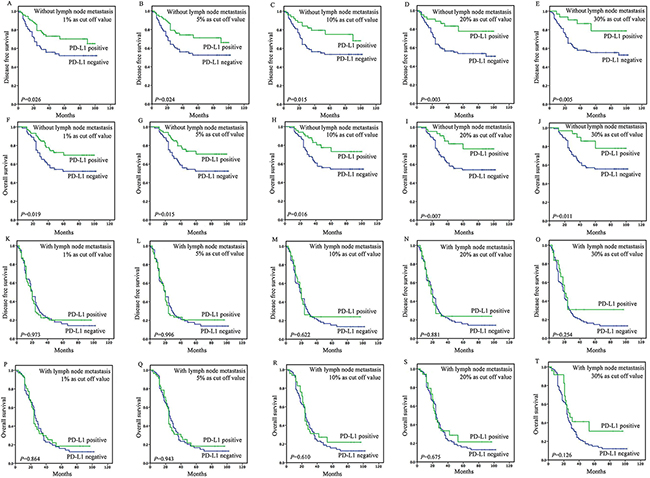 The PD1-PD-L1 pathway has been important factors in cancer progression [25]. PD-L1 is expressed on a number of tumors, where it is believed to play a major role in immune suppression within tumor microenviroment (TME). However, there have been conflicting results in the literature as to whether PD-L1 expression is a favorable or adverse prognostic variable [17, 20, 26]. It is likely that the cohorts of patients, methods of assessment, definitions of cut-off value may account for these results.

Firstly, in previous studies, most of researchers put the collected patients as a whole, with no consideration of clinical stage. Here, we first divided our patients into different groups according to their clinical stage or the state of lymph node metastasis, to evaluate the prognostic significance of PD-L1 expression in ESCC. We found in ESCC patients with earlier stage (stage I-II or lymph node-negative), PD-L1 expression was associated with a significant better prognosis, while a lack of association between PD-L1 expression and outcome in patients with later stage (stage III-IV or lymph node-positive). This suggested the prognostic significance of PD-L1 expression was conditioned, only limited in some stages, not in all stages of ESCC.

Some researches also found the prognostic significance of biomarkers might differ in patients with different stages. For example, the prognostic impact of defective DNA mismatch repair (dMMR) appears to be stronger in earlier stage colorectal cancer (CRC) (stage II) than in later CRC (lymph node-positive or stage III) [27]. T-bet expression was associated with a significant better survival in CRC patients with stage I or II, however, it tended to be associated with a significant worse survival in patients with stage III or IV [28]. In NSCLC, PD-L1 expression appears to be a favorable prognostic factor in early stage disease, and the results may differ in advanced stage disease [20]. Therefore when facing with conflicting conclusions in prognostic analysis, it’s needed to be further analyzed in patients with different stage or lymph node state, in order to speculate the underlying reasons for the results.

Thirdly, the determination of cut-off values for the percentage of stained cells was difficult, and the absence of optimal positivity cut-off might be correlated with divergent results in previous studies. The results of the CheckMate 057 study have recently shown that PD-L1 expression (cut-off point 1%) significantly correlated with ORR (overall response rates), PFS (progression free survival) and OS, in pre-treated NSCLC patients [32]. In the prognostic analysis, different IHC cut-off points, ranging from 1% to 50%, have been used to define the PD-L1 positivity in tumor specimens [16, 21, 33]. Here, our work demonstrated the tumoral and stromal PD-L1 expression at different cut-off level of 1%, 5%, 10%, 20%, 30% and 50% to explore the best cut-off in prognostic analysis. Univariate and multivariate analysis found tumoral PD-L1 expression at the lowest level (cut-off point 1% or 5%) was independent prognostic factor among patients without lymph node metastasis or with Stage I-II disease. This suggests the cut off value should be down regulated to 1% or 5% in earlier stage ESCC.

PD-L1 expression was associated with a better outcome in earlier stage of ESCC, which has also been observed in NSCLC [34], pulmonary lymphoepithelioma-like carcinoma [35],colorectal cancer [36], breast cancer [14], and melanoma [8]. The biology of the association between PD-L1 expression and better outcome is not well understood. A potential explanation is a mixed immune cell infiltrate, which reflects a partially dysbalanced local cellular immune response and contributes to antitumor immune control. Some studies have suggested that PD-L1 could also provide positive signal through an unknown receptor other than PD-1, resulting in T-cell proliferation and induction of certain cytokines such as interleukin-10 and IFN-γ [6]. The systemic immunologic environment may affect the tumor growth to varying degrees. Further studies are required to clarify the molecular mechanisms responsible for regulation of PD-L1 expression.

In summary, we demonstrated tumoral PD-L1 expression at large-range levels (IHC cut-off from1% to 30%) was independent prognostic factor, associated with good prognosis in earlier stage of ESCC (with Stage I-II disease or without lymph node metastasis), not in later stage of ESCC (with Stage III-IV disease or with lymph node metastasis). Notably, the provocative observation indicated the prognostic significance of PD-L1 expression might limit in earlier stage of ESCC. Complex molecular mechanisms might involve in the biology of later stage ESCC, which reduce the biological role of PD-L1 expression. This also suggest the clinical significance of biomarkers should be analyzed according to different clinical stage in the clinical practice.

This retrospective study was conducted in a cohort of 278 ESCC patients, who underwent curative resection (TNM stage: I-IVa) without preoperative chemotherapy at the Department of Thoracic Surgery, Zhongshan Hospital affiliated to Fudan University, Shanghai, China, between 2007 and 2010. Our research was approved by the local Ethics Committee of Zhongshan Hospital and was conducted in accordance with the ethical principles stated in the most recent version of the Declaration of Helsinki. All patients were pathologically staged according to the TNM classification system of the American Joint Committee for Cancer.

Tissue microarrays (TMA) were constructed as previously described [37]. Hematoxylin and eosin (HE)-stained slides were reviewed and the representative areas of interest with a high density of tumor cells were circled. The corresponding regions were marked on archival formalin-fixed, paraffin-embedded (FFPE) tissue blocks. The representative areas (2 mm wide and 6 mm long) was extracted, with at least three cores taken from different regions of the tumor, and then vertically planted into the recipient block one by one according to the corresponding location. The planting surface was aggregated on the aggregation instrument. An array was constructed with a maximum of 70 cores and a stomach core was used as an orientation marker.

PD-L1 IHC was evaluated in consensus viewing by two experienced pathologists, who were blinded to the clinical data, independently analyzed the PD-L1 expression. The results were evaluated according to the percentage of the stained cells and the intensity of the IHC signal intensity. Scoring was assessed in both the tumoral and stromal compartments: tumoral membranous or cytoplasmic expression and stromal immune cell compartments [14]. Similar to many studies in other cancers [38-40], tumors were classified as PD-L1-positive if there was ≥1% tumoral membranous or cytoplasmic PD-L1 expression, or ≥1% stromal PD-L1 expression. Because the most appropriate cut-off value for PD-L1 expression in ESCC remains unclear, analyses were also performed utilizing ≥5%, ≥10%, ≥20%, ≥30% and ≥50% cut-points for tumor PD-L1 positivity in each compartment, as the cut-offs were utilized in other study of PD-L1[41-43].

The Chi-square test was also used for comparing clinicopathologic features between tumor groups. The date of last follow up was August 15, 2015. The time of DFS was defined as the time between diagnosis and local recurrence, distant metastasis, or death from ESCC. The time of OS was defined as the time between diagnosis and death from ESCC. Kaplan–Meier 5-year survival curves were generated and log-rank analyses were performed. Univariate Cox proportional hazard models were fitted to identify factors significantly correlated with DFS and OS. To assess whether the PD-L1 expression was an independent predictor of survival, a multivariate Cox model was constructed to adjust other clinicopathological characteristics that were significant in the univariate analyses.

All the statistical analyses were accomplished by the IBM SPSS statistics version 19.0 (SPSS Inc. Illinois, USA). Statistical significance was determined as p-values <0.05.

We gratefully acknowledge the support of the patients and their families who agreed to contribute to this research program.

This work was supported by Shanghai Municipal Commission of Health and Family Planning, Key-developing disciplines (No.2015ZB0201).