Esophageal squamous cell carcinoma (ESCC) is the leading cancer-related cause of death in China. Approximately 8-20% of these patients have supraclavicular lymph node metastasis [1-3]. The prognosis of upper and middle thoracic esophageal squamous cell carcinoma (UMT-ESCC) with supraclavicular lymph node metastasis is still unsatisfactory, with 5-year survival rate 20% [4]. Radiotherapy plays important role in the treatment of locally advanced ESCC. The development of technologies such as intensity-modulated radiotherapy (IMRT) and image-guided radiotherapy (IGRT) permitted to deliver radiation doses to tumor while sparing the adjacent organ-at-risk [5, 6]. Hyperthermia, elevation of temperature inside tumor up to 40-42 °C, is an effective modality for the treatment of cancer. Hyperthermia also acts as a radiation- and chemo- sensitizer. The heat inhibits reparation of free radical and increases the damage to the DNA of tumor cells. Furthermore, hyperthermia can increase perfusion and oxygenation of neoplastic hypoxic cells that may enhance tumor radiation response. The efficacy of radiotherapy concomitant with hyperthermia against head and neck cancer [7], melanoma [8], and breast cancer [9] were demonstrated. Moreover, hyperthermia enhances cytotoxicity of several anticancer agents, such as docetaxel, gemcitabine and 5-FU [10, 11]. The heat accelerates chemotherapeutics reactions, facilitates the uptake of drugs through cell membrane. Preclinical studies showed that the combination of 5-FU and hyperthermia could promote tumor cell apoptosis and increase the thermotolerance, consequently improves prognosis and reduces side effects of chemotherapy [12]. A few clinical trials of patients with head-and-neck squamous cell carcinoma with N3 cervical lymph node metastasis who were treated with chemoradiotherpy plus hyperthermia have been reported [7]. However, no trials using thermoradiation therapy plus systemic chemotherapy treated ESCC with supraclavicular lymph node metastasis have been reported. So the aim of present study was to evaluate the efficacy and toxicity of Intensity-modulated radiotherapy (IMRT) and hyperthermia in UMT-ESCC.

Table 1: Characteristics of 50 patients with UMT-ESCC

All patients received IMRT without any interruption. Of 50 patients enrolled, 36 patients received two cycles of chemotherapy. The other 9 patients only received one cycle of chemotherapy according to patients’ wish (5 patients), due to treatment-related toxicity (3 patients), due to reduced performance status (1 patient). Second cycle of chemotherapy delay occurred in 5 patients after the first cycle due to insufficient white blood cell counts or platelet counts. The median hyperthermia sessions were 8 (range: 2-12 sessions). Maximum temperature in the central surface of the supraclavicular lymph node was 43.3°C and minimum temperature was 42.3°C. 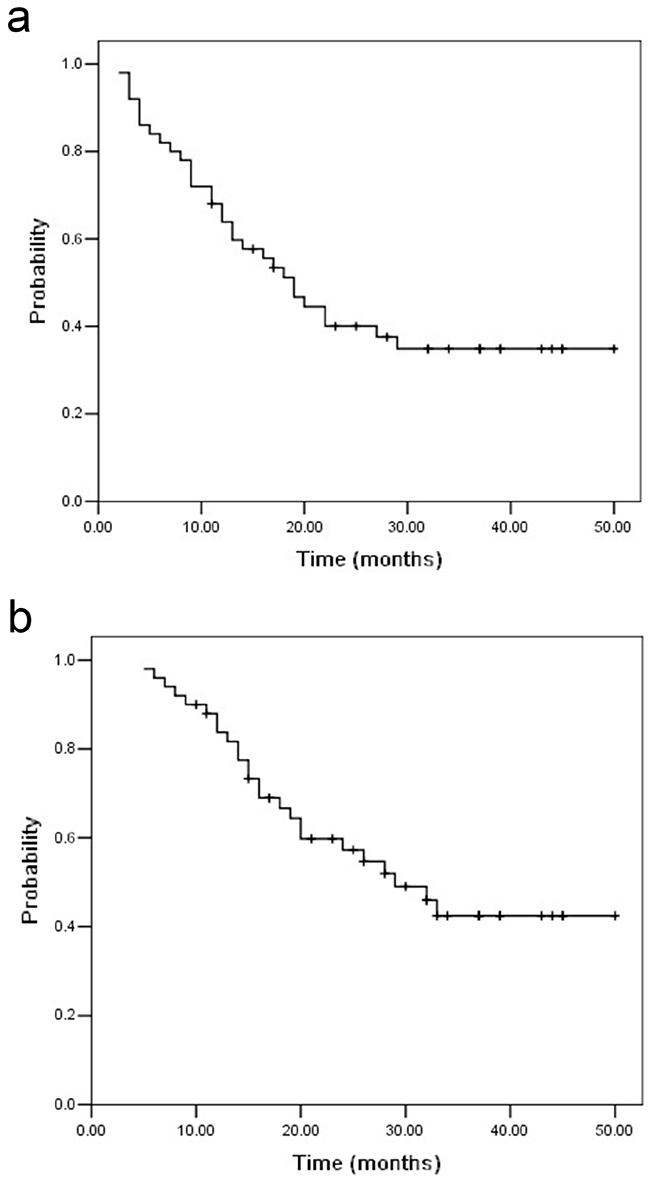 Figure 1: Progression-free survival a. and overall survival b. for UMT-ESCC patients with supraclavicular lymph node metastasis. The median PFS and OS time were 19.0 months and 29.0 months. 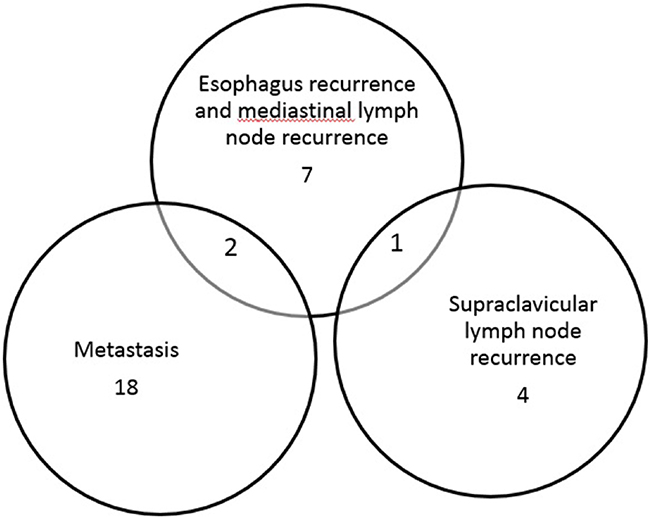 Figure 2: Venn diagram of the overlap among failure patterns after chemoradioherapy plus hyperthermia in UMT-ESCC patients with supraclavicular lymph node metastasis.

Table 4: Univariate analysis of PFS and OS among 50 patients with UMT-ESCC with supraclavicular lymph node metastasis

Several studies have investigated that definitive chemoradiotherapy is an important and hopeful treatment option for patients with ESCC with supraclavicular lymph node metastasis (see Table 5). The 3-year PFS and OS in these studies were 6-20% and 12-33.5% respectively. The 3-year PFS and OS in present study were a bit higher than that in these studies. But all these studies (including present study) are phase I or II clinical trials. Thus, large randomized controlled clinical trials are needed to confirm it.

There are several limitations in this study. The major limitation is that not all the patients received the same anticancer treatment, including radiation exposure dosages, chemotherapy regimens, and chemotherapy cycles. Selection bias could not be avoided due to its retrospective study design. Owing to the small sample number, we must acknowledge the potential presence of type II error in our conclusion. Finally, tumor staging in this study was based on radiological examination.

All patients were immobilized in a supine position with the use of thermoplastic cast. Simulation CT images were acquired with 5 mm thickness throughout the entire neck and thorax. The gross tumor volume (GTV) was defined as esophageal cancer shown on the CT and mediastinal lymph nodes with the short axis of ≥10 mm and supraclavicular lymph nodes with the short axis of ≥10 mm. The clinical target volume (CTV) included the primary tumor with a 2.5 cm margin in the esophageal long axis superiorly and inferiorly, but 1.0 cm margin was added around GTV. The plan target volume (PTV) was defined as the CTV plus 0.5-1.0cm to account for the daily setup variation and respiratory movement. Radiation plans for intensity-modulated radiation therapy (IMRT) were generated using Pinnacle Version 8.0. IMRT was delivered using 6-MV X-rays (Radiotherapy machine: Varian Clinical 23EX) with multi-leaf collimator (MLC). A fractional daily dose of 1.8-2.0 Gy (5 days per week) was prescribed. The median delivered dose of IMRT was 60.0 Gy (ranged: 50.0-71.6Gy). The dose to the organs at risk was constrained as follows: The lung dose was limited to V20<30%, V30<20% and a mean dose less than 15 Gy. Spinal cord maximum dose was held to 45 Gy. The mean heart dose was ≤30 Gy.

Radiofrequency capacitive heating device, with microwave spiral strip applicators, named HRL-001 (Jilin Maida, China), maximum output at 800W, were used for external heating. Hyperthermia was delivered as soon as possible after the irradiation (usually within 30 min), or 2h after chemotherapy finished. The applicator was chosen depending on the surface of the superclavical to be treated and tumor extent. In the supine position, patients were positioned with a pillow under their heads and their arms resting at the side of their body. Ultra sound was used every two weeks to observe tumor extent, position and depth. Hyperthermia was confined to supraclavicular lymph node metastasis. The area of hyperthermia field depended on tumor extent. Normally, a gap of 2 cm was required between hyperthermia field and tumor. In case of bilateral supraclavicular nodal metastasis, two hyperthermia fields were used simultaneously. The objective of hyperthermia treatment was to achieve a minimal tumor temperature higher than 43.0 °C at reference thermometer, while limiting maximum temperature of the adjacent skin at 43.5 °C, and to maintain this condition for at least 45 min. The reference thermometer was defined as centrally located probe in relation to the tumor. Continuous temperature monitoring was performed by thermocouples in multi-sensor surface and interstitial probes. Patients were carefully instructed to report any discomfort during treatment. Heart rate, blood pressure, and peripheral oxygenation were automatically evaluated every 5 min.

During the chemoradiotherapy, patients received physical examination and upper gastrointestinal radiography once a week. Treatment response was evaluated on CT images, upper gastrointestinal radiography and upper GI endoscopy according to Response Evaluation Criteria in Solid Tumors (RECIST), version3.0. Furthermore, if there was suspicious of local recurrences, the patients also needed further upper GI radiography and endoscopy to confirm. The CR (complete response), PR (partial response), SD (stable disease) and PD (progressive disease) were assessed at an interval of 4-6 weeks after chemoradiotherapy to confirm the objective response. Treatment-related acute toxicity was scored by the Common Terminology Criteria for Adverse Events Version 3.0 once a week during treatment and then every 3 months at follow-up visits. Toxicity was recorded as the highest grade experienced during the whole treatment. All patients received standardized follow-up, 1 month after radiation and at 3-month intervals thereafter.

11. Maeta M, Sawata T and Kaibara N. Effects of hyperthermia on the metabolism of 5-fluorouracil in vitro. International journal of hyperthermia. 1993; 9:105-113.