Nasopharyngeal carcinoma (NPC) is unique in its geographical distribution with prevalence in Southern China, Hong Kong, Taiwan, Singapore and Malaysia as well as association with Epstein-Barr virus (EBV) [1, 2]. According to global cancer registry, NPC ranked 11th most common among all malignancies in China in 2008 with an incidence of 2.8/100000 person-years in men and 1.9/100000 person-years in females. The most common histological types are undifferentiated non-keratinizing carcinoma (WHO Type III) and differentiated non-keratinizing carcinoma (WHO Type II). Radiation therapy alone is offered for stage I and II disease while concurrent chemoradiation is indicated for locally advanced stage III to IVB disease [3]. Intensity-modulated radiation therapy (IMRT) has been the most contemporaneous radiation therapy technique for the past decade due to its superior tumor coverage and dose sparing of critical normal structures from unnecessary radiation, leading to better treatment outcomes and toxicity profiles [4-11]. Plasma EBV DNA titer has been found important in both diagnosis and monitoring of treatment response during and after definitive treatment [12-22]. However, its role in the IMRT era remains uncertain, and the appropriate time points for its surveillance after IMRT are undefined. Currently plasma EBV DNA titer has yet to be recommended by the American Joint Committee on Cancer (AJCC) staging manual and European Society for Medical Oncology (ESMO) as a tumor marker in routine clinical staging and posttreatment monitoring [23]. There is an unmet and urgent need for identifying its role at baseline and in posttreatment monitoring to improve risk stratification, leading to closer surveillance and intensified treatment in poor-risk groups in the modern era of radiation therapy. We initiated this prospective observational study on measuring baseline and serial plasma EBV DNA titers for all patients with newly diagnosed non-metastatic NPC to determine the prognostic value of early post-IMRT plasma EBV DNA on long-term survival outcomes. We now presented our preliminary results on 3-year survival endpoints. This study was registered with the National Cancer Trial Registry as NCT02476669 (ClinicalTrials.gov).

The study schematic diagram was shown (Figure 1). A total of 289 consecutive patients were recruited from July 2010 to June 2013. Of them, 29 patients were excluded from subsequent analyses after written informed consent: 23 patients did not have blood taken for baseline or serial plasma EBV DNA, three patients suffered from stage IVC metastatic disease confirmed by PET-CT scan and another three patients died during IMRT (two died from sepsis and one committed suicide). The characteristics of the remaining 260 patients for analysis were displayed in Table 1. 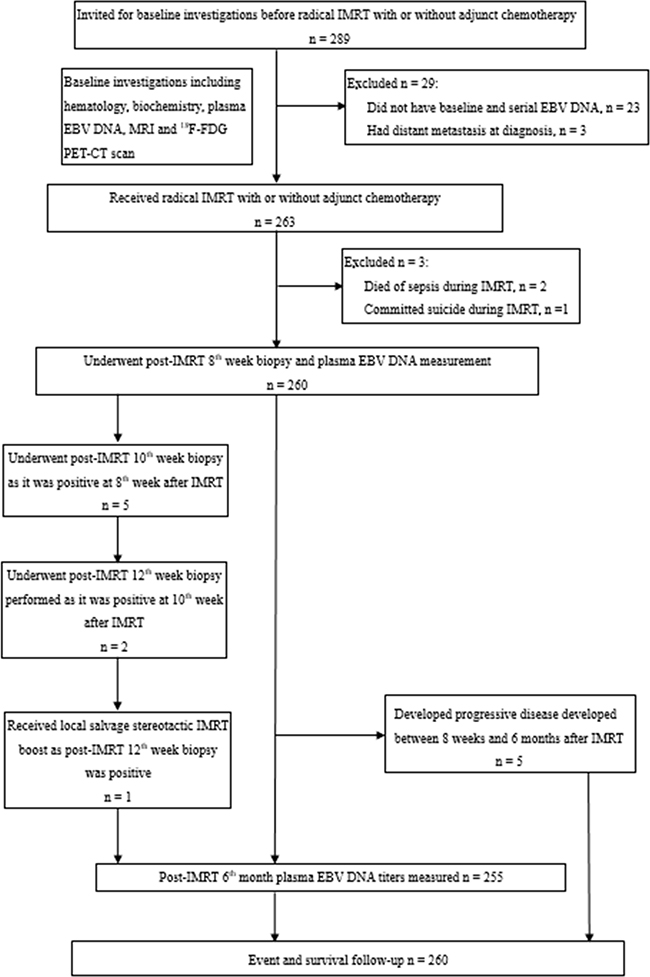 The median baseline plasma EBV DNA titers for all patients was 934 copies/ml (range 10–1575000 copies/ml). Mood’s median test showed that the medians were significantly different across different overall stages (P = 0.003) (Figure 2). All patients completed IMRT without treatment interruption. Forty-six patients received IMRT alone for their early-stage disease (40 patients) or because of their advanced age and/or significant medical contraindications to chemotherapy (6 patients). However, these 6 patients were still free from relapse. At 8 weeks after IMRT, 30 patients still had elevated plasma EBV DNA (range 14–4512 copies/ml); all but 1 had undetectable titers at 12 weeks after IMRT and this remaining patient’s plasma EBV DNA was then undetectable at 16 weeks after IMRT. Another patient, despite undetectable plasma EBV DNA, had confirmed local persistence at 12 weeks. He received additional stereotactic IMRT boost (20Gy in 8 fractions over 1.5 weeks) without any residual disease noted afterwards. His plasma EBV DNA was persistently undetectable before and after stereotactic boost. Five patients developed progressive disease with distant metastases between 8 weeks and 6 months after IMRT, and thus they were only included in the subsequent TDROC and survival analysis using post-IMRT 8th week (but not 6th month) undetectable plasma EBV DNA as stratifying factor. Seventeen patients had elevated plasma EBV DNA (range 19–29375 copies/ml) at 6 months after IMRT. Of them, 3 developed local recurrence, 1 patient suffered from regional nodal failure, 5 patients had distant metastases, 1 patient had both regional and distant failure, 1 patient had local and distant failure and the remaining 6 were still free of relapse. After a median follow-up duration of 3.4 years (range 1.4–4.6 years), 10, 5 and 19 patients had local failure, regional failures and distant metastases, translated into 96.2%, 98.1% and 92.7% for the 3-year local, regional and distant metastasis control rates respectively. The 3-year LFFS, RFFS, DMFS, PFS, CSS and OS were 95.2%, 96.9%, 91.2%, 88.0%, 95.8%, 93.9% respectively. The Kaplan-Meier estimates of all survival endpoints for all stages were also shown (Supplementary Figure S1). 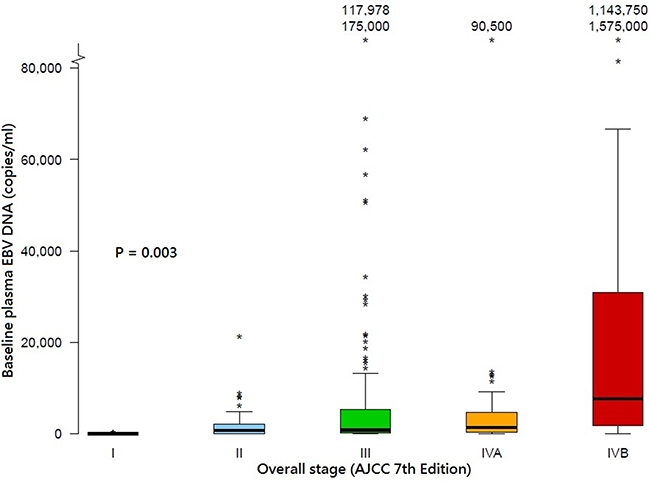 Figure 2: Box and whisker plot showing the distribution of baseline plasma EBV DNA titers across different overall stages of NPC in the study population. The band inside the boxes indicates the median. The boxes indicate the interquartile range and the whiskers indicate the values between (1st quartile - step) and (3rd quartile + step) where step = 1.5 × interquartile range. The * indicates an extreme outlier with its value either 2 steps below the 1st quartile or 2 steps above the 3rd quartile. AJCC: American Joint Committee on Cancer; DNA, deoxyribonucleic acid, EBV: Epstein-Barr virus. 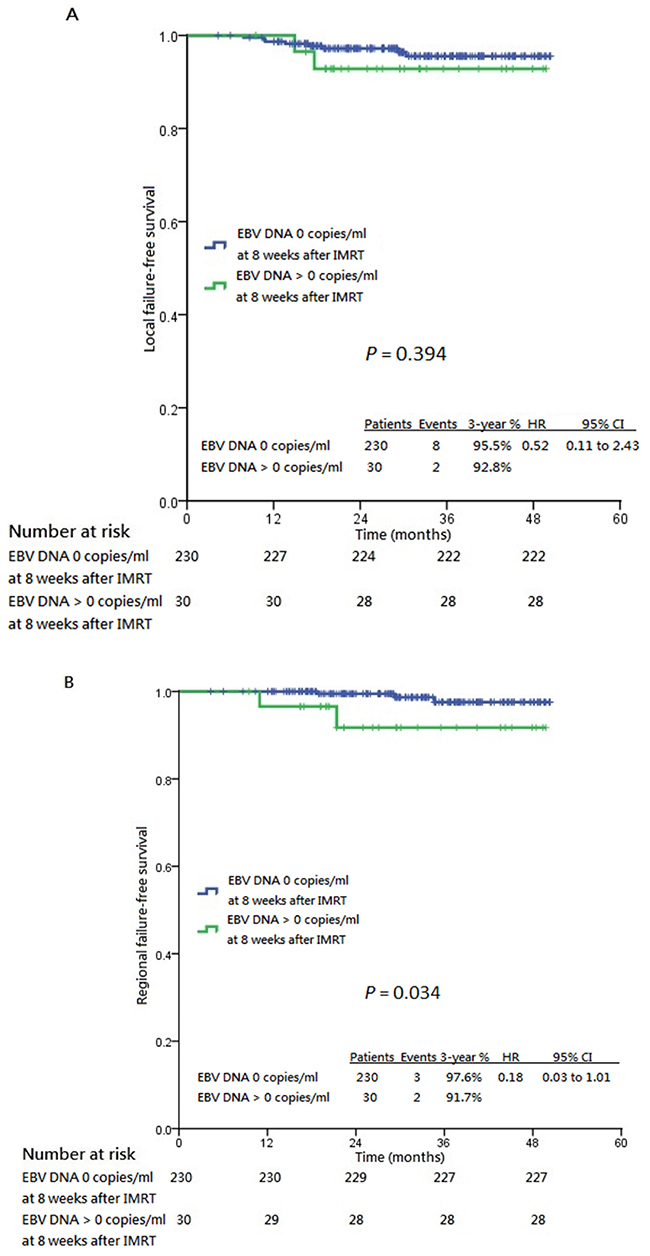 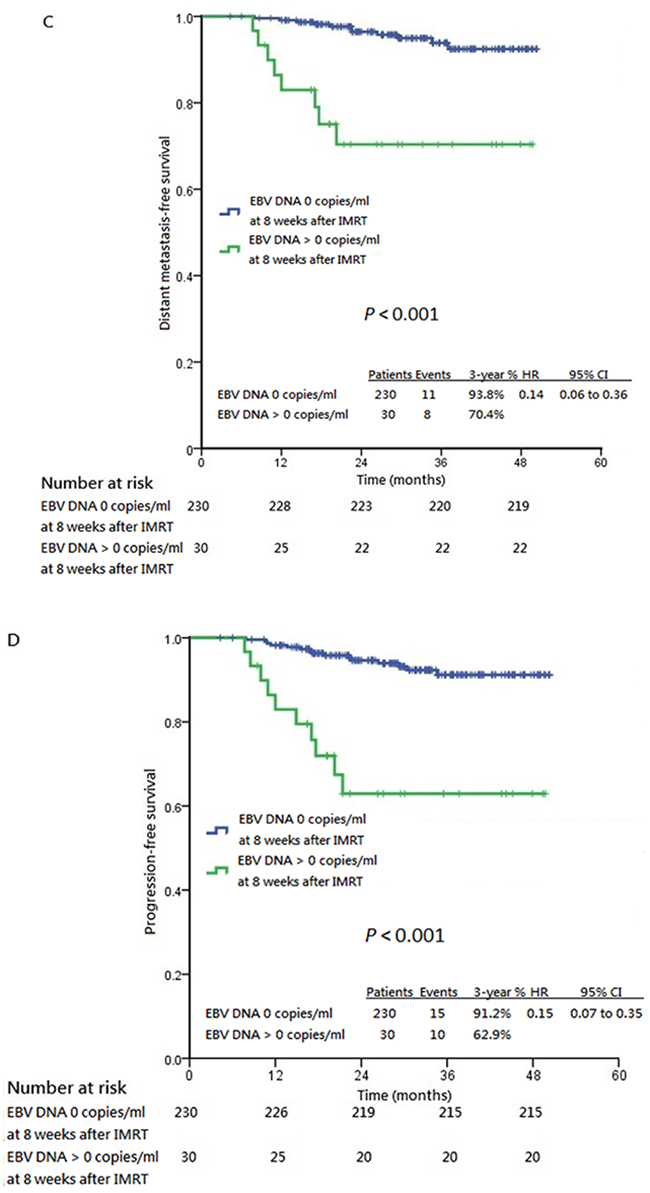 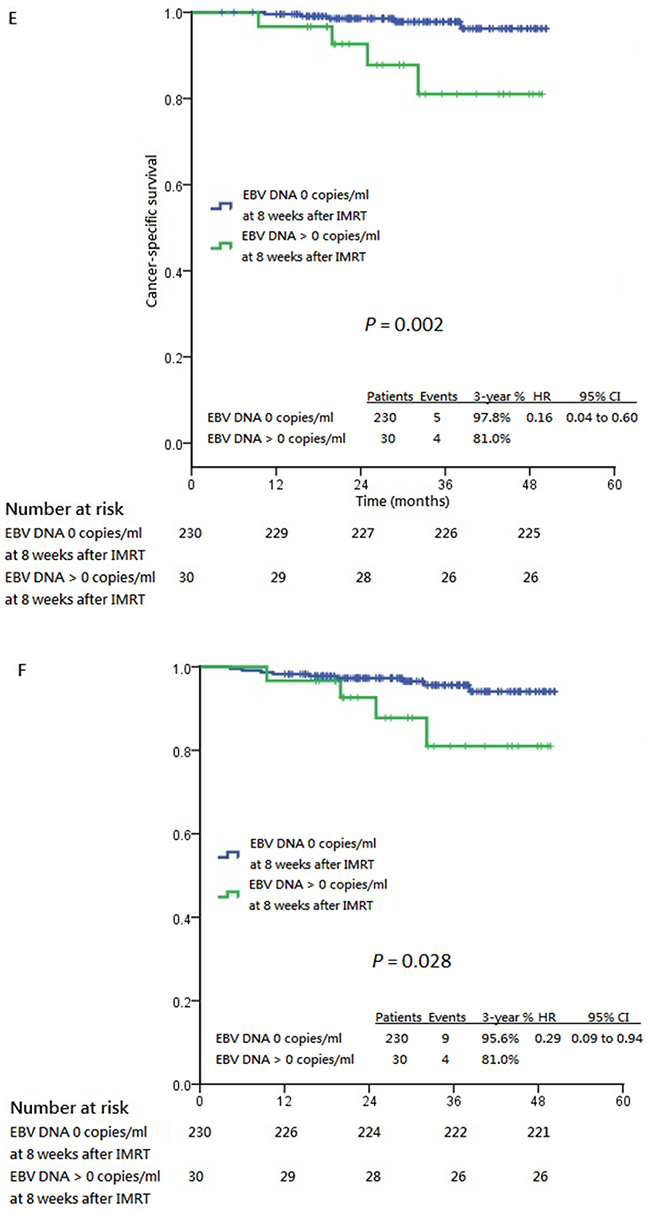 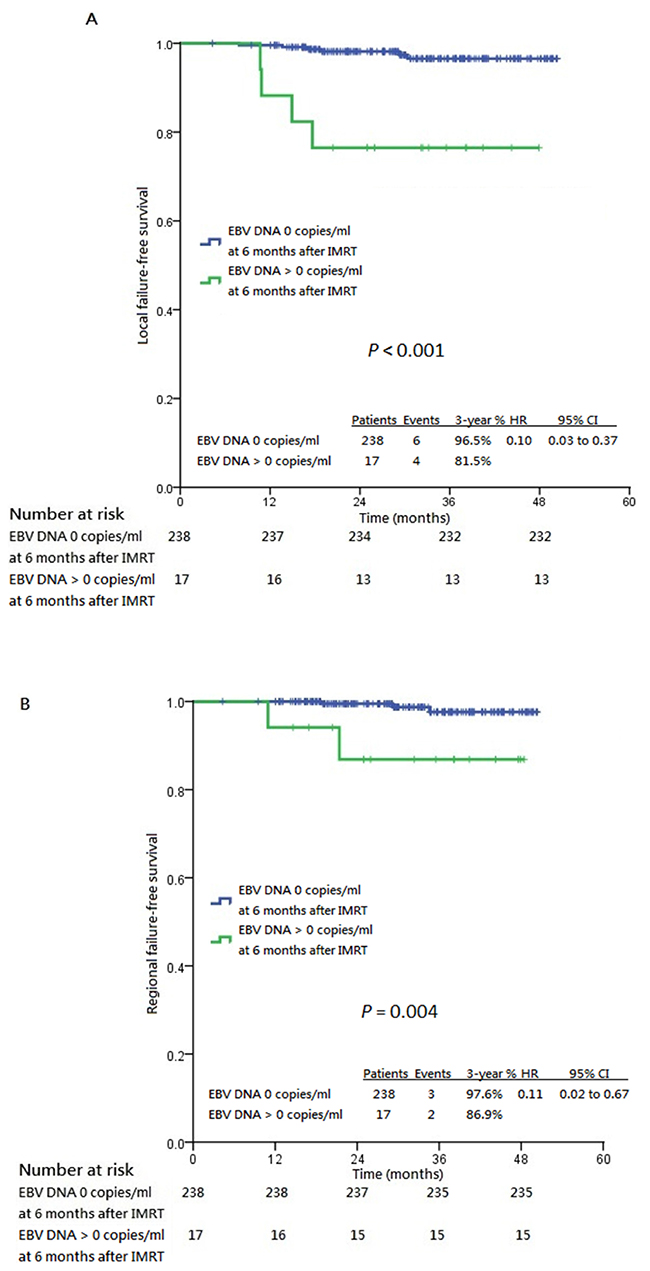 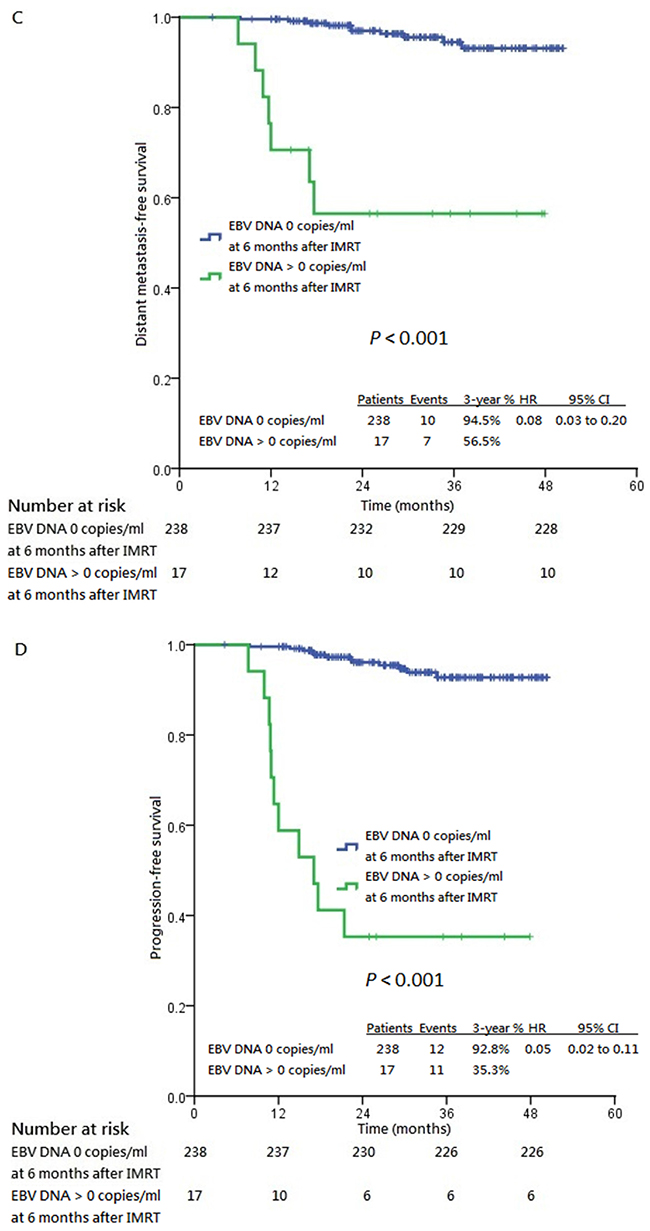 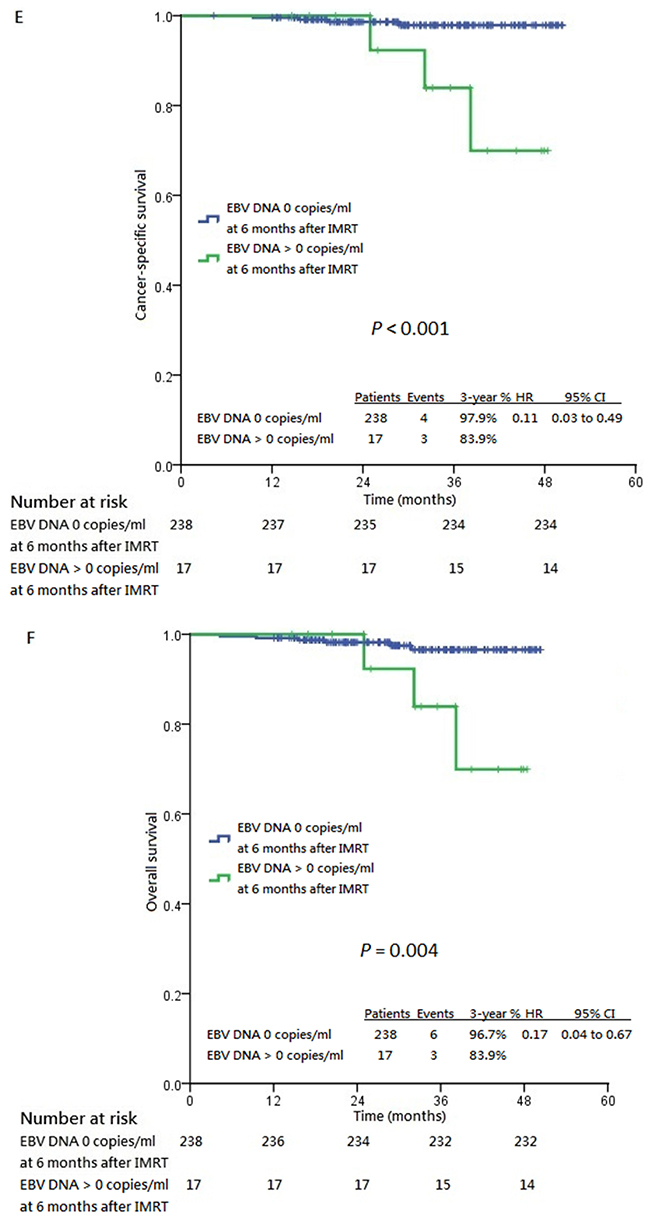 The discovery of plasma EBV DNA has established itself as an accurate biomarker for detection, surveillance and prognostication of NPC. For the past 15 years, numerous studies have investigated the correlation between pretreatment plasma EBV DNA levels and clinical stage, tumor load and treatment outcomes [12-21]. However, either these studies were performed when the 5th and 6th edition of AJCC staging system were in use, when modern radiation therapy techniques for example IMRT was not fully implemented or when various cut-off values of pretreatment and posttreatment plasma EBV DNA titers were used in the exploratory analyses. In addition, PET-CT scan as complete and accurate staging workup was not employed in previous studies; thus, some patients might have been understaged. Though Peng et al in their recent retrospective study showed the prognostic value of post-IMRT plasma EBV DNA on survival outcomes, blood taking for plasma EBV DNA was checked at only one time point after IMRT and the exact date of measurement was not specified [24]. On the contrary, our study is the first prospective observational studies investigating the prognosticative role of baseline and serial post-IMRT plasma EBV DNA titers on various predefined survival endpoints on the basis of complete PET-CT staging and full IMRT implementation.

In addition, the method of measuring plasma EBV DNA was in line with that mentioned in the previous study be Le et al which correlated the plasma EBV DNA titers of 40 samples in each of the four tertiary referral centers in the United States, Taiwan and Hong Kong [25]. The EBV DNA copy numbers were all determined by real-time quantitative polymerase chain reaction (qPCR) (BamHI-Wprimer/ probe). A large variabiltiy of plasma EBV DNA titers was observed, especially when different PCR master mixes and calibrators were used. After study harmonization and standardization with the use of same master mixes and calibrators, correlations were more than 99% between the centers. A uniform and consistent method of EBV DNA assay should be employed in future multi-center prospective studies.

Our excellent treatment results were likely attributed to complete radiological staging, dedicated IMRT contouring and planning, and close posttreatment surveillance. The median survival was thus not reached in all subgroups due to a lack of failure events. This also explained why the other prespecified baseline covariates including stage and baseline plasma EBV DNA were not good segregators of survival difference. Our preliminary 3-year survival endpoints are also representative indicators of long-term survival outcomes, as only 0 (0%), 0 (0%) and one (0.4%) patient developed local, regional and distant failure respectively at more than three years after IMRT. This echoed the large retrospective study in China which included 868 patients with non-metastatic NPC treated with IMRT with or without adjunct chemotherapy, with the vast majority of treatment failures occurring within the 1st to 3rd year after treatment [26]. This highlighted the crucial importance of frequent surveillance within the first three years after IMRT. Of course longer follow up with more mature results is needed in our study for the detection of late relapses.

In conclusion, early serial undetectable plasma EBV DNA titers after radical IMRT with or without adjunct chemotherapy were prognostic of better 3-year survival outcomes in patients with non-metastatic nasopharyngeal carcinoma.

Patients with newly diagnosed non-metastatic NPC of undifferentiated type (WHO Type III) treated with IMRT as a curative treatment were recruited into this prospective observational study since July 2010 with prior approval by the local institutional review board of our institution. The study was undertaken in accordance with Declaration of Helsinki and Good Clinical Practice guidelines. After written informed consent, all patients had pretreatment workup including serum hematology and biochemistry, plasma EBV DNA, [18F]fluorodeoxyglucose (18F-FDG) positron-emission tomography with integrated contrast-enhanced computed tomography (PET-CT) scan with patients immobilized by a prefabricated customized head and neck thermoplastic cast, and magnetic resonance imaging (MRI) including T1, T2 and fat-suppressed contrast-enhanced T1 sequences of the head and neck in treatment position by 3T scanner (Arhieva 3.0 T, Philips Healthcare, Best, The Netherlands) on the following day as previously described to exclude those with distant metastasis or second primary malignancy and for IMRT target delineation and planning (Supplementary Data). Two independent radiologists specialized in head and neck radiology and blinded to treatment details determined the stage and tumor extent; any discrepancies were resolved by consensus, based on the 7th edition of AJCC classification. Plasma EBV DNA was extracted and calculated as previously described (Supplementary Data) [12]. All patients also underwent endoscopy and nasopharyngeal biopsies on both sides of the nasopharynx to assess extent of mucosal tumor spread. Then they received IMRT as described (Supplementary Data) [38]. Briefly, 70 Gy was delivered to the planning target volume (PTV)-70 and 66 Gy to the PTV-66 in 33 fractions by the simultaneous accelerated radiation therapy technique. In general, patients with stage I and II disease received IMRT alone while stage III to IVB patients received concurrent chemoradiation with the Intergroup 0099 regimen consisting of cisplatin intravenous infusion (100mg/m2) every three weeks starting on the 1st day of IMRT and adjuvant chemotherapy with cisplatin on day 1 and 5-FU from day 1 to 4 for three more cycles starting at four weeks following IMRT [39]. Patients with bulky cervical nodal (≥3cm in diameter) stage II disease were also given concurrent chemoradiation only, at the discretion of the treating oncologist. Patients who had their primary tumors in close proximity to normal critical organs-at-risk (OARs) would receive 3 cycles of induction chemotherapy (cisplatin 100mg/m2 on day 1 and 5-FU 1000mg/m2 from day 1 to 5 every three weeks) before concurrent chemoradiation, in an attempt for significant tumor shrinkage so that a radical radiation dose could be delivered to the tumors with more sparing of these OARs. At 8 weeks following completion of IMRT, all patients had routine 6-site random nasopharyngeal biopsies as our standard practice and blood checked for plasma EBV DNA titers (Figure 1) [40]. Local salvage treatment was given to patients who had persistent primary tumor at 12 weeks after IMRT [41]. If their plasma EBV DNA was still >0 copies/ml at 8 weeks after IMRT, it would be repeated 4 weeks thereafter until it was undetectable or it was proven to have persistent locoregional disease or metastasis clinically or radiologically. Patients with complete local remission had follow up clinical evaluation every 2 to 3 months, surveillance MRI scan every 3 to 4 months, and PET-CT scan if clinically suspicious of relapse. Plasma EBV DNA was measured again at 6 months after IMRT and then as clinically indicated afterwards. Any elevation of plasma EBV DNA would lead to endoscopy and nasopharyngeal biopsy, MRI and PET-CT evaluation and subsequent salvage treatment if recurrence was confirmed.

This study was supported by SK Yee Medical Foundation (project number 210212, 211259 and 213208). The costs of publication of this article were defrayed by the authors and not by the funder.