Previous results regarding the prognostic value of the neutrophil-to-lymphocyte ratio (NLR) and platelet-to-lymphocyte ratio (PLR) in gastric cancer are conflicting, and full analysis of other blood test parameters are lacking. We therefore examined the associations between various blood test parameters and prognosis in 3243 gastric cancer patients randomly divided into training (n=1621) and validation (n=1622) sets. Optimal cut-off values of 0.663 for neutrophil-to-white blood cell ratio (NWR), 0.288 for lymphocyte-to-white blood cell ratio (LWR), 0.072 for monocyte-to-white blood cell ratio (MWR), 2.604 for NLR, 0.194 for monocyte-to-lymphocyte ratio (MLR), and 130.675 for PLR were identified in the training set. Univariate and survival analyses revealed that high NWR, low LWR, high MWR, high NLR, high MLR, and high PLR are all associated with a poor prognosis in gastric cancer. However, multivariate analysis revealed that only LWR, and MWR are independent prognostic predictors, and prognostic value increased when LWR and MWR were considered in combination. These findings suggest that low LWR and high MWR are each predictive of a poor prognosis, and exhibit greater prognostic value when considered in combination.

Although incidences have declined in recent decades, gastric cancer is still the fifth most common malignancy and the third leading cause of cancer-related mortality worldwide [1]. Surgical resection with extended lymph node clearance remains the only curative option for non-metastatic gastric cancer. Despite rapid advances in surgical techniques and adjuvant therapy, the prognosis for advanced gastric cancer is still poor [2]. Precise prognostic assessment is critical for optimizing treatment decisions and improving outcomes in gastric cancer patients. [3]. However, accurately predicting outcomes based on the current TNM staging system is difficult because prognosis varies among patients with the same TNM stage. Additional parameters are therefore needed to better identify prognostic factors in patients and to aid in the selection of tailored therapies.

Inflammation is a critical component of tumor progression. Systemic inflammation promotes tumor progression and metastasis by inhibiting apoptosis and promoting angiogenesis [4]. NLR and PLR are simple and cost-effective strategies for evaluating systemic inflammation response and are associated with poor prognosis in various malignancies [5]. Previous reports have also demonstrated that NLR and PLR are associated with outcomes in gastric cancer [6, 7].

In this study, we investigated the prognostic value of various blood test parameters in gastric cancer patients. 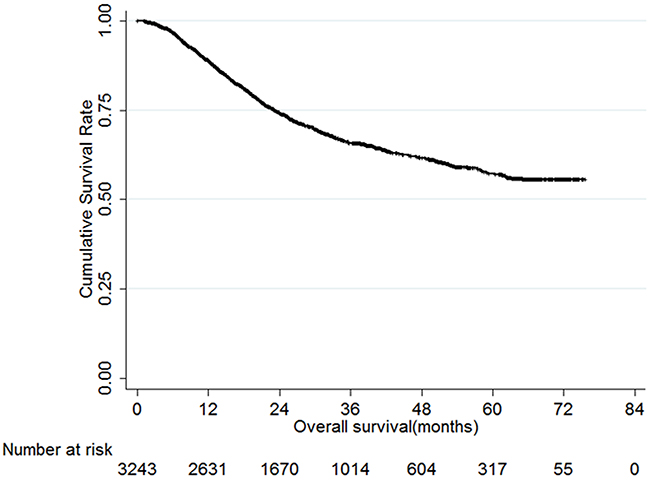 Table 1: Comparison of clinicopathological characteristics of patients in the training set and validation set 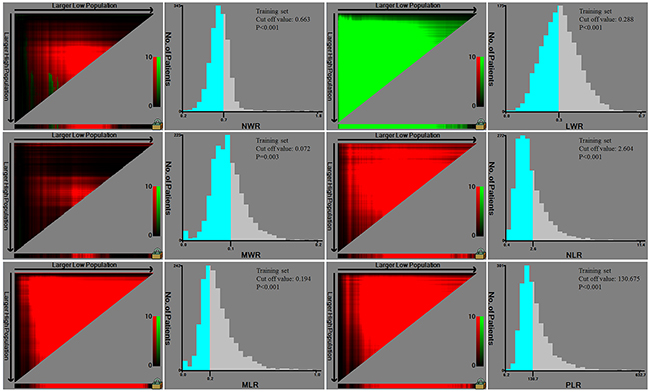 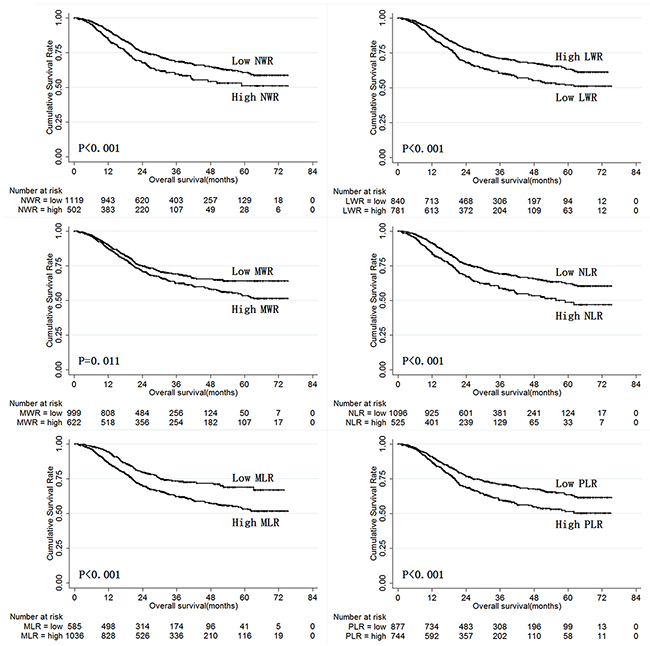 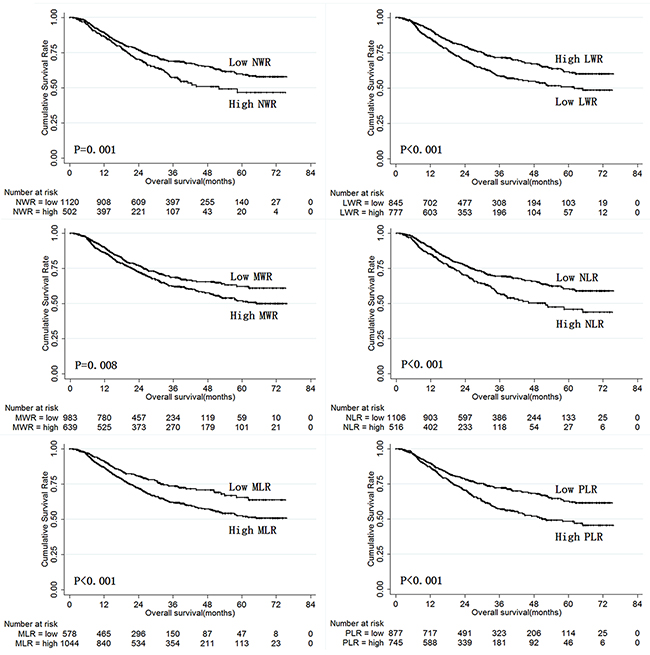 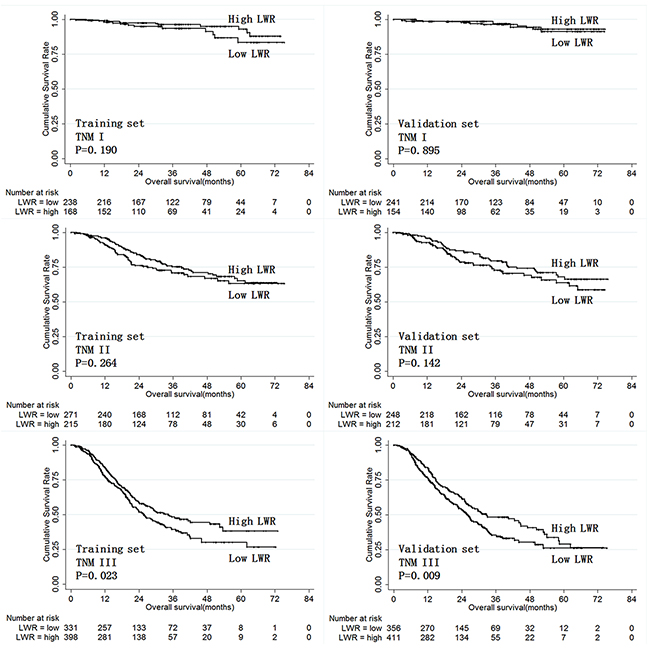 Figure 5: Overall survival according to LWR in training and validation set patients stratified by TNM stage. 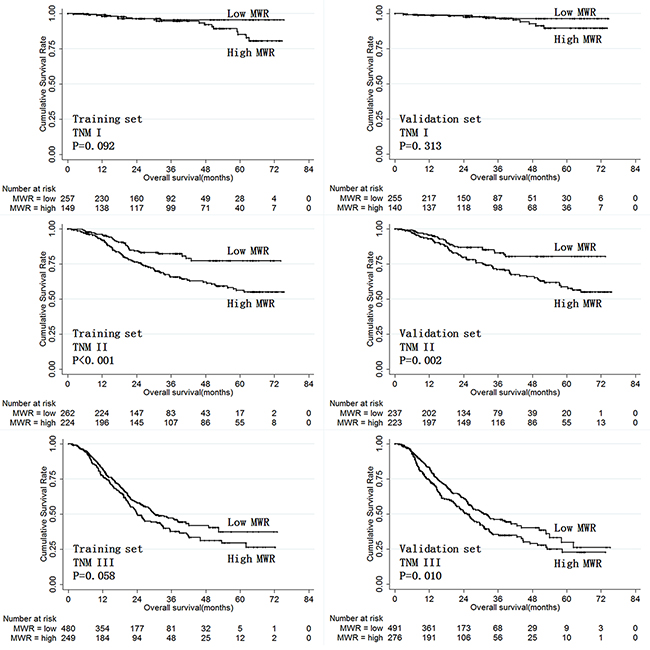 Figure 6: Overall survival according to MWR in training and validation set patients stratified by TNM stage. 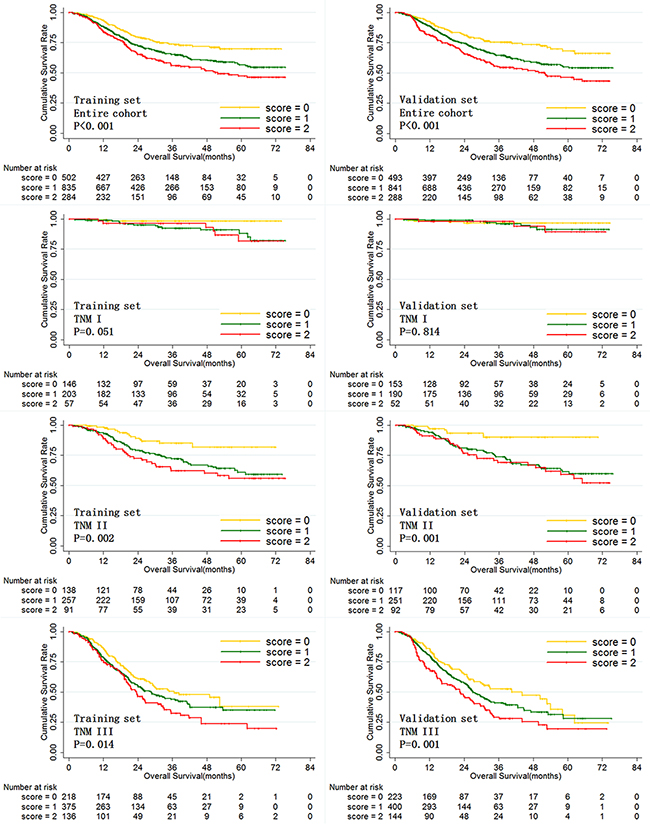 Figure 7: Overall survival of training and validation set gastric cancer patients according to LWR and MWR in combination.

Peripheral neutrophil is a marker of acute and chronic inflammation [13], and upregulation of peripheral neutrophils in response to the production of hematopoietic cytokines by tumor cells is indicative of more aggressive tumors [14]. Here, we found that high NWR was associated with poor prognosis in gastric cancer patients. Previous reports have shown that neutrophils promote tumor growth and metastasis by secreting vascular endothelial growth factor [15], chemokines [16] and matrix metalloproteinase-9 [17]. Neutrophils also increase adhesion between end organs and circulating tumor cells, thus increasing the chances of metastatic seeding. Spicer et al. reported that neutrophils act as adhesive adapters between circulating tumor cells and metastatic targets [18]. In addition, elevated neutrophil levels in the vicinity of tumors may inhibit the antitumor effects of activated T cells and natural killer cells [19].

Lymphocytes play critical roles in host immune responses and possess potent anticancer activities that inhibit growth and metastasis in several tumors [20]. Furthermore, increased lymphocyte levels are associated with better prognosis in a variety of tumors [21]. Consistent with these results, we found here that high LWR was associated with better prognosis in gastric cancer patients.

Platelets also play a critical role in tumor development and progression, and thrombocytosis is associated with poor prognosis in a variety of solid tumors [6]. Platelets promote tumor growth by increasing angiogenesis via cytokine vascular endothelial growth factor [23] and protect tumor cells against environmental stresses in the blood stream, including immune attack, shear force, and mechanical trauma [24]. Moreover, platelets promote tumor chemotaxis, adhesion, proliferation, and metastatic spread through extensive interactions with tumor cells [25]. For these reasons, PLR has been extensively investigated and is a valuable prognostic factor for several solid malignancies [5]. Here, we found that PLR was also associated with prognosis in gastric cancer, although it was not an independent prognostic factor.

Although the underlying mechanisms remain unknown, monocyte levels are also associated with prognosis in a variety of tumors, including gastric cancer [26]. In the present study, we found that high MWR and MLR were both associated with poor prognosis in gastric cancer. Moreover, MWR was identified as an independent prognostic factor. Monocytes promote angiogenesis and tumorigenesis [27] and suppress host anticancer immune responses, which may explain why elevated monocyte levels were associated with poor prognosis [28]. Monocytes also promote the development of malignant cells by secreting soluble mediators [29]. In addition, cytokines and chemokines produced by tumor cells can trigger the differentiation of monocytes into tumor-associated macrophages [30], which in turn promote tumor cell growth, migration, and metastasis [31].

While treatments that specifically modify pre- and post-operative imbalances between inflammatory and immune status might improve long-term outcomes for patients with malignant tumors, no such therapies currently exist. In addition, inflammatory and immune response parameters might help predict responses to and toxicity resulting from different treatments; future studies are needed to examine these possibilities.

Several limitations of the present study should be considered when interpreting the results. First, it was a retrospective study of patients from a single institution, and multi-center studies are needed to confirm the predictive value of the parameters identified here. Second, the cut-off values used in the present study differed from values used in our previous studies; standard cut-off values that are effective in prospectively predicting gastric cancer prognosis across studies should be identified. Third, the prognostic value of absolute differential white cell counts in gastric cancer patients was not examined here [32].

This study was performed at the Xijing Hospital of Digestive Diseases affiliated with the Fourth Military Medical University. 3243 gastric cancer patients were enrolled in the study between September 2008 and March 2015. Patient inclusion criteria were as follows: 1. no other malignancy, 2. no distant metastasis, 3. no history of neoadjuvant chemotherapy, 4. had undergone radical D2 gastrectomy, 5. preoperative blood tests were available, 6. no signs of infection, 7. follow-up data were available. This study was approved by the Ethics Committee of Xijing Hospital, and written informed consent was obtained from all patients before surgery.

The authors report no financial or other conflicts of interest.