Recent findings on the existence of oncogenic fusion genes in a wide array of solid tumors, including head and neck squamous cell carcinoma (HNSCC), suggests that fusion genes have become attractive targets for cancer diagnosis and treatment. In this study, we showed for the first time that a read-through fusion gene JMJD7-PLA2G4B is presented in HNSCC, splicing neighboring jumonji domain containing 7 (JMJD7) and phospholipase A2, group IVB (PLA2G4B) genes together. Ablation of JMJD7-PLA2G4B significantly inhibited proliferation of HNSCC cells by promoting G1 cell cycle arrest and increased starvation-induced cell death compared to JMJD7-only knockdown HNSCC cells. Mechanistically, we found that JMJD7-PLA2G4B modulates phosphorylation of Protein Kinase B (AKT) to promote HNSCC cell survival. Moreover, JMJD7-PLA2G4B also regulated an E3 ligase S-phase kinase-associated protein 2 (SKP2) to control the cell cycle progression from G1 phase to S phase by inhibiting Cyclin-dependent kinase inhibitor 1 (p21) and 1B (p27) expression. Our study provides novel insights into the oncogenic control of JMJD7-PLA2G4B in HNSCC cell proliferation and survival, and suggests that JMJD7-PLA2G4B may serve as an important therapeutic target and prognostic marker for HNSCC development and progression.

Read-through transcripts (also known as conjoined genes) are fusion genes resulting from a hybridization of juxtaposed genes from the same chromosome in the same orientation [1-2]. Fusion genes were first recognized in hematologic malignancies as essential drivers of development and progression of cancer [3-4]. Since then, the total number of gene fusions reported in numerous cancers is estimated to be 10,000, where more than 90% of the discoveries occurred in the past 5 years due to recent bioinformatics advancements [4,5]. Studies report that gene fusions occur in all malignancies and account for about 20% of malignant solid tumor morbidity [1]. Thyroid carcinoma was the first epithelial tumor type found to involve a gene fusion, RET-CCDC6, in carcinoma pathogenesis [6, 7]. Additionally, a high frequency of gene fusions was detected in prostate [8], lung [9], and breast cancer [10], suggesting recurrent fusion genes may serve as valuable biomarkers and drug targets in epithelial cancers. However, the relative mechanism by which fusion genes promote the progression of cancer remains largely unknown.

Squamous cell carcinoma (SCC) is a common and deadly malignancy associated with an uncontrolled growth of cells originating from the mucosal lining of the oral cavity, head and neck, lung, cervix, skin, etc [11, 12]. SCC comprises 90% of head and neck malignancies and is associated with a poor prognosis and the lowest 5-year survival rate amongst major cancers [12]. Recently, a number of studies reported the important role of fusion genes that result from genomic rearrangements and translocations in HNSCC development and metastasis [13, 14]. The MYB-NFIB fusion gene resulting from chromosome translocation in carcinoma of the breast and head and neck has been shown to be oncogenic and a potential therapeutic target [13]. Fibroblast growth factor receptor 3-transforming acidic coiled-coil-containing protein 3 (FGFR3-TACC3) fusion transcript is recurrently detected in HNSCC and has been shown to play a key role in tumor resistance [14]. However, fusion genes still remain poorly understood and, in particular, read-through transcripts have not yet been characterized in HNSCC. Clearly, there is an urgent need for understanding the functional role and molecular mechanisms of these potent oncogenic fusions genes in HNSCC tumorigenesis and progression.

Previously, we found that JMJD7 siRNA was able to inhibit the invasive growth of human SCC23 cell lines in our functional screening assays in vitro [15]. JMJD7 is a JmjC-only group member of the JmjC-domain-containing histone demethylation proteins [16]. JMJD7 was recently identified to affect prostatic cancer DU145 cell viability and found to be highly expressed in SCC [17]. Interestingly, we found that JMJD7 gene is located on chromosome 15 and may form a naturally occurring read-through transcript with a neighboring PLA2G4B gene to encode a fusion protein known as JMJD7-PLA2G4B [18]. JMJD7-PLA2G4B shares an amino acid sequence, including a partial JmjC domain and downstream C2 and phospholipase A2 domains [18]. JMJD-PLA2G4B is a paralog gene of PLA2G4B and has been described previously in U937 cells, isolated from the histiocytic lymphoma, to encode a calcium-dependent phospholipase that hydrolyzes the phospholipids to lysophospholipids and fatty acids [18, 19]. In addition, the human cancer tissue proteome revealed that JMJD7-PLA2G4B proteins are highly expressed in various cancers such as breast, prostate, and thyroid cancer [20]. However, the functional role of JMJD7-PLA2G4B gene in HNSCC and other solid tumors is unknown. In this study, we sought to characterize the expression of JMJD7-PLA2G4B gene in SCC cell lines from diverse head and neck tumor regions, and explore the oncogenic role of JMJD7-PLA2G4B in HNSCC. 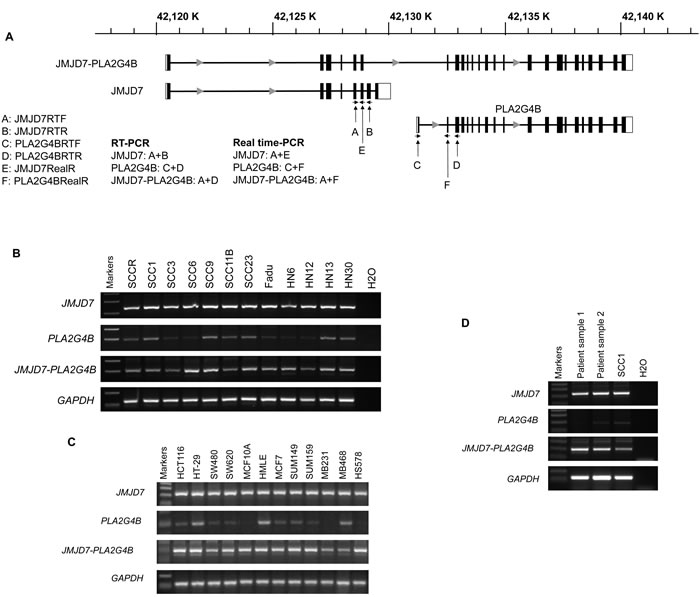 JMJD7-PLA2G4B is required for HNSCC proliferation 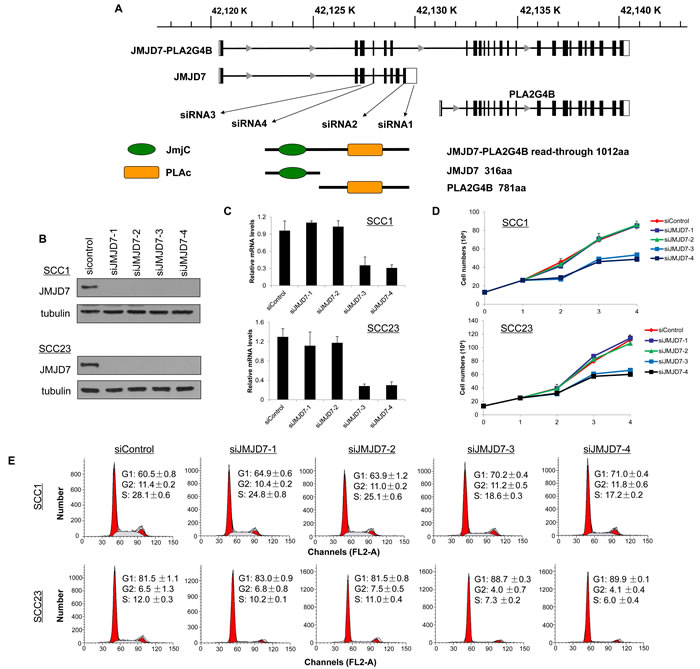 Figure 2: JMJD7-PLA2G4B is required for HNSCC cell proliferation and cell cycle progression. A. Schematic presentation of gene structure of JMJD7, PLA2G4B, and JMJD7-PLA2G4B and the protein domain structure of JMJD7, PLA2G4B, and JMJD7-PLA2G4B and the size of the product. The locations of regions where siRNAs were designed from are indicated. B. Western blotting of JMJD7 in SCC1 and SCC23 cells following transfection with siRNAs. α-tubulin was used as a loading control. C. qRT-PCR showing the mRNA level of JMJD7-PLA2G4B after siRNA transfection. Values are means ± S.D; ** p < 0.01. D. Knockdown of JMJD7-PLA2G4B using siJMJD-3 and siJMJD-4 decreased the proliferation rate of SCC1 and SCC23 compared to JMJD7 knodckdown (siJMJD7-1 and siJMJD7-2) alone and control. Values are means ± S.D. E. Flow cytometry analysis of SCC1 and SCC23 cells after JMJD7 or JMJD7-PLA2G4B knockdown using siRNAs. 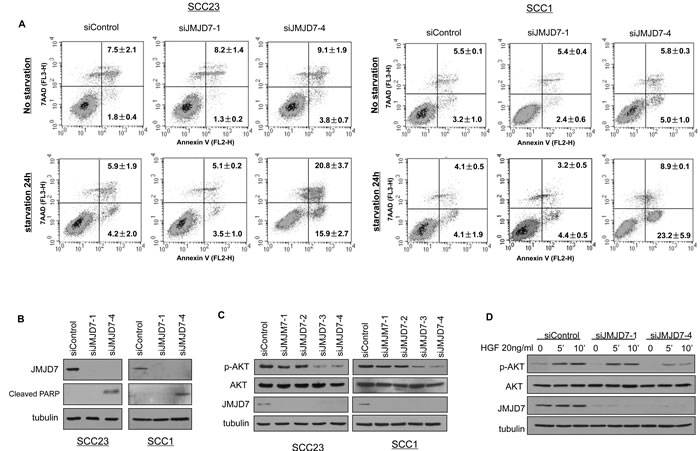 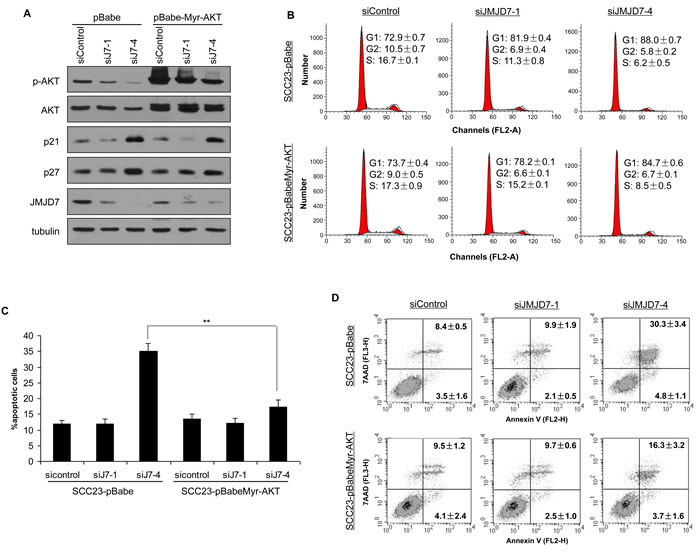 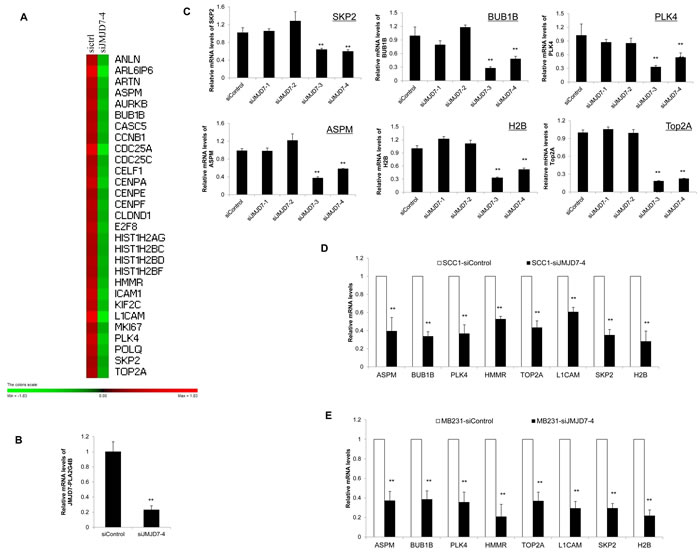 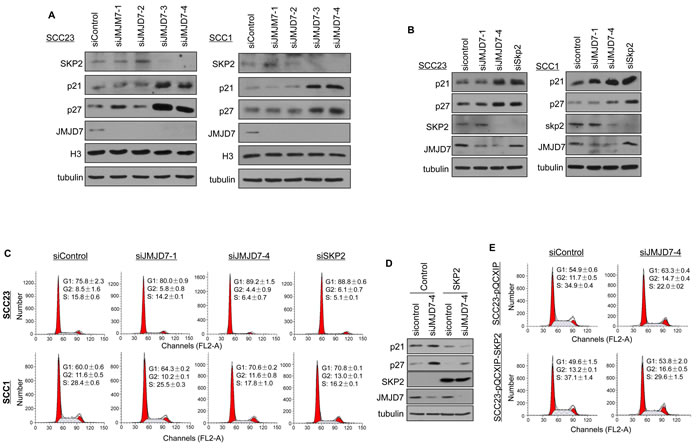 In this study, we report for the first time that the read-through fusion gene product JMJD7-PLA2G4B plays a critical role in HNSCC cell proliferation and survival. Our study uncovers the significance of the fusion protein and its role in inappropriate proliferation in HNSCC. We showed that overexpression of JMJD7-PLA2G4B is ubiquitously present in HNSCC, colon, and breast cancer cell lines. Our data also demonstrate that JMJD7-PLA2G4B functions independently from JMJD7 and is essential for HNSCC cell survival, proliferation, and cell cycle progression from G1 arrest.

Based on our findings, JMJD7-PLA2G4B plays a critical role in the regulation of AKT phosphorylation in HNSCC. In HNSCC, HGF can directly activate PI3K or through a crosstalk with the epidermal growth factor receptor (EGFR), leading to AKT activation [24, 27, 28]. Interestingly, our data revealed that knockdown of JMJD7-PLA2G4B inhibits HGF-induced AKT phosphorylation in HNSCC. Thus, further studies are needed to elucidate the role of JMJD7-PLA2G4B on signal transduction leading to AKT activation. The AKT pathway has been known to promote survival and growth of various cancer cells including HNSCC by modulating the downstream apoptotic regulators [27, 29]. AKT activation is also frequently found in human HNSCC tumor tissues and closely correlates with the disease progression [29]. AKT has been previously reported to phosphorylate both p27 and p21 and prevent the nuclear import of p27 as well as the ability of p21 to bind to CDK [30], ultimately enabling cell cycle progression in cancer cells. In contrast, our data showed that while the overexpression of the activated AKT in JMJD7-PLA2G4B knockdown SCC cells was able to restore the ability to resist cell death, it could not reverse G1 phase arrest of the cell cycle. This difference may be context-dependent. Consistent with our data, it has been reported that p21 is not regulated by PI3K-AKT activation in HNSCC cell lines [31], indicating AKT may not be a major cell cycle regulator in HNSCC cells.

The human pBabe-Myr-AKT plasmid (#9015) and the human pcDNA3-myc-Skp2 plasmid (#19947) were purchased from Addgene. The pcDNA3-myc-Skp2 plasmid was subcloned into the retroviral vector pQCXIH with SKP2 ORFF/ORFR sequence (Supplemental Table 1). The PCR reactions were performed with AccuPrimeTM Taq polymerase according to the manufacturer’s protocol (Invitrogen), then subcloned into pQCXIP using AgeI and EcoRI site. PureLinkTM HiPure plasmid filter purification kit (Invitrogen) was used for midi preparation of the plasmid. To generate stable cell lines, virus production was performed according to the protocol provided by Addgene using HEK-293T viral packaging cells and Lipofectamine 2000 (Invitrogen). 48 hours after the transfection, the media containing viruses were collected and used for infection. Infected cells were incubated for 48 hours and then selected with puromycin (1μg/ml) for at least 1 week. The expression was confirmed by real-time RT-PCR or Western blot analysis. SKP2 siRNA, PLA2G4B siRNA, and scramble siRNA were purchased from Santa Cruz Biotechnology. Each siRNA consists of pools with three to five target-specific 19-25 nt siRNAs designed to knockdown target gene expression. The target siRNA sequence for JMJD7 and JMJD7-PLA2G4B are listed (Supplemental Table 1) and were synthesized by Sigma Aldrich. Cells were transfected with siRNAs using Lipofectamine RNAiMax (Invitrogen). Cells were collected 36 hours after transfection for further analysis.

The use of consented human head and neck cancer tissue samples for this study was approved by the UCLA Institutional Review Board. The HNSCC tissues from two independent patients were obtained from UCLA Department of Pathology & Laboratory Medicine (TPCL). Total RNA was isolated from cells and tissues using TRIzol reagent (Invitrogen), and cDNA was synthesized with random hexamers (Sigma) using SuperScript III reverse transcriptase (Invitrogen). Semi-quantitative RT-PCR was performed using AccuPrimeTM Taq DNA Polymerase according to the manufacturer’s protocol (Invitrogen). qRT-PCR was carried out with iQ SYBR green supermix (Bio-Rad) on an iCycler iQ real-time PCR detection system (Bio-Rad). All the primer sequences for PCR are listed (Supplemental Table 1). All samples were run in triplicates in the same culture plate.

For microarray, total RNA was extracted from SCC23 cells with miRNeasy kit following the manufacturer’s instruction (Qiagen) after 72 hours of transfection with scramble siRNA or siJMJD7-4, respectively. 5 µg aliquots of total RNAs were transcribed from each sample to double-stranded complementary DNA (cDNA) using SuperScript II RT (Invitrogen) with an oligo-dT primer and then used to generate single-stranded RNAs. The biotin-labeled RNAs were fragmented and hybridized with an Affymetrix Human Genome U133 Plus 2.0 Array at the UCLA DNA Microarray Facility. The arrays were scanned with the GeneArray scanner (Affymetrix). The robust multichip average (RMA) method was used to normalize the raw data. Heatmap of differential gene expression was generated using PermutMatrix v1.9.3 to reflect fold change relative to median expression of each gene in Log2 ratio [34]. The genes with more than 2-fold changes in expression were considered significant.

Cell cycle distribution was determined by DNA content using propidium iodide staining. Cells were fixed in pre-cold 70% ethanol and stored at 4°C before analysis. PE Annexin V Apoptosis Detection Kit I was purchased from BD Pharmingen, and the experiments were done according to the manufacture’s instruction. Flow cytometric analysis was done by a FACS SCAN flow cytometer (Becton-Dickinson, San Jose, CA) at the flow cytometry center at University of California, Los Angeles. For each sample, 10,000 events were counted and recorded. All samples were performed in triplicates.

SCC1 and SCC23 cells were seeded onto a 6-well culture plate with a density of 1.4 x 105 per well. Then cells were transfected with control siRNA, JMJD7-siRNA1, or JMJD7-siRNA4, respectively. The cell numbers were counted at 0, 24, 48, and 72 hours interval following the transfection using Countess II FL Automated Cell Counters (Invitrogen).

Experiments presented in the figures are representative of at least three independent repetitions. Data were presented as mean ± SD. Statistical analysis performed with SPSS 23.0 were used in data processing for the paired or two-sided t test or ANOVA. P values < 0.05 were considered significant.

Flow cytometry was performed in the UCLA Jonsson Comprehensive Cancer Center (JCCC) and Center for AIDS Research Flow Cytometry Core Facility that is supported by National Institutes of Health awards P30 CA016042 and 5P30AI028697, and by the JCCC, the UCLA AIDS Institute, the David Geffen School of Medicine at UCLA, the UCLA Chancellor’s Office, and the UCLA Vice Chancellor’s Office of Research.