Lung cancer, as one of the most common cancers worldwide, is the first-leading cause of cancer-related death in China [1, 2]. Lung cancer has two main types: non-small cell lung cancer (NSCLC) and small cell lung cancer (SCLC). The vast majority (80%) of cases of lung cancer are NSCLC [3, 4]. The development of NSCLC has been taken into account as an environmental and genetic event. Several genome-wide association studies (GWAS) have identified a number of genetic signatures, which correlate with cancer development [5, 6].

Innate complement control system is part of fundamental innate immune defense mechanisms involved infighting against cancer by exerting immune-surveillance [7–9]. CD55 (decay accelerating factor, DAF) is a glycosylphosphatidylinositol (GPI)-anchored membrane inhibitor of complement. DAF inhibits complement activation by interfering with C3/C5 convertases in both classical and alternative pathways [10, 11]. Physiologically, the expression of CD55 protects host cells from the damage of pathogenic microorganisms. The expression CD55 in gastric cancer, colon and breast cancer was significantly greater than in those non-cancer tissues [12–16]. However, studies also demonstrated a down-regulated expression of CD55 in ovarian cancer and lung cancer tissues [17, 18]. In Higuchi’s study, CD55 was recognized as a novel PNA-binding protein in the human lung and the down-regulation of CD55 was associated with pathology of primary NSCLC [17].

Based on the possible function of CD55 in cancer development, we hypothesized that CD55 genetic variants contribute to the risk of developing NSCLC. In this present study, we conduct a case-control study to investigate the association of DAF genetic variant with the susceptibility of NSCLC. Furthermore, we provide evidence to suggest the effect of this polymorphism on the promoter activity of DAF gene.

The principal demographic and clinical characteristics of the participants summarized in Table 1. No statistically significant differences were observed in the distributions of age and gender between the cases and controls. It was found that more smokers were present among lung cancer cases than health controls (44.8% vs. 28.3%, P < 0.001). However, there was no significant difference in light and heavy smokers between cases and controls. Among lung cancer cases, 57.2% were classified as adenocarcinoma, 38.7% as squamous-cell carcinoma, and 4.1% as other types, including adenosquamous carcinoma (n = 15), large cell carcinoma (n = 5), and alveolar carcinoma (n = 9).

Table 1: Distributions of select characteristics by cases and controls subjects

Association of CD55 polymorphism and the risk of lung cancer

Table 2: Genotype frequencies of CD55 rs2564978 and their association with NSCLC

aData were calculated by unconditional logistic regression and adjusted for sex, age and smoking status.

aData were calculated by unconditional logistic regression and adjusted for sex, age and smoking status. 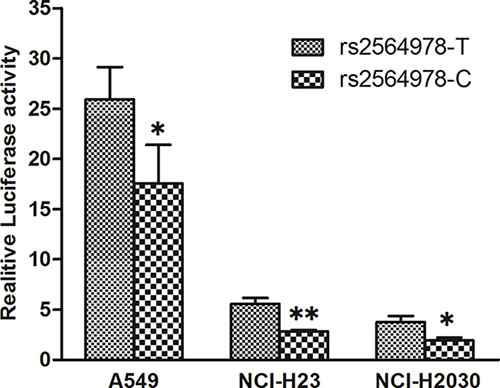 Figure 1: Effect of the CD55 rs2564978 polymorphism on the CD55 promoter activity. Transient reporter gene expression assays with constructs containing the CD55 rs2564978 C or T allele, which was inserted at upstream of the luciferase reporter gene in the pGL3-Basic plasmid. The two constructs were transfected into the A549, NCI-H2030 and NCI-H23 cells, respectively. All of the constructs were co-transfected with pRL-SV40 to standardize the transfection efficiency. Data shown are the means ± SD from 3 independent transfection experiments, each performed in triplicate. *P < 0.05 and **P < 0.01 compared with the pGL3-rs2564978T construct.

Currently, it is unclear if the polymorphism located in the promoter CD55 is associated with the risk of developing lung cancer. In the present study, we found that the CD55 rs2564978 T > C variant significantly decreased the transcriptional activity in lung cancer cells and contributed to an increased risk of NSCLC.

Human immune system included two distinct subsystems, innate immune and adaptive immune. Complement system served as a functional bridge between innate and adaptive immune responses [19]. As one of key membrane complement regulatory proteins (mCRPs), CD55 activates T and B cells by binding to CD97, which is expressed on macrophages, granulocytes [12]. CD55 also inhibits C3 and C5 activation and thereby limits complement-dependent cell cytotoxicity (CDC) [10, 13]. Studies have demonstrated a down-regulation of CD55 in NSCLC cells [17]. Our present results supported that the CD55 rs2564978 CC genotype was linked to an increased risk of NSCLC. This finding is similar with our previous result from gastric cancer case-control study [20]. This population data can be explained by our luciferase reporter gene assay. We found that C allele of rs2564978 was associated with reduced expression of CD55 compared with the T allele in lung cancer cells. However, in human bronchial epithelial cells, Zhou’s luciferase assay showed that CD55 promoter with rs2564978 T allele exhibited significantly lower transcriptional activity than that with C allele [21]. These may illustrate the different role of CD55 in normal cells and cancer cells.

Cigarette smoking is the most demonstrated risk factor for the development of lung cancer [22, 23]. Thus, we analyzed the role of CD55 polymorphism in the development of lung cancer stratified by smoking status. Our results suggested that CD55 rs2564978 variant was related to lung cancer among smokers, but not among non-smokers. Tobacco could induce chronic inflammation in lung microenvironment and modify host responses to exogenous antigens [24, 25]. In the process of inflammatory response, complement activation plays an important role. It has been reported that cigarette smoke induced the cleavage of C3 and C5 and further led to activation of the alternative complement pathway [26, 27]. As a key regulator of C3 and C5, the effect of CD55 genetic variant to the risk of lung cancer might be altered by tobacco smoke.

In conclusion, our results indicated that rs2564978 C allele decreased the transcriptional activity of CD55 and was associated with the susceptibility of NSCLC in a Chinese population.

Based on the Han Chinese in Beijing (CHB) population data from Ensembl, we selected the SNPs located in the promoter region of CD55, and the minor allele frequency (MAF) in HapMap was greater than 5%. Web-based Alibaba 2.1 (http://www.gene-regulation.com/pub/programs/alibaba2/) was used for predicting transcription factor binding site. As a result, only one SNP in the promoter of CD55 was selected for further analysis.

This is a continuous case-control study involved 706 patients with lung cancer and 706 healthy controls [28, 29]. All subjects were genetically unrelated Han Chinese. All case subjects were newly diagnosed and histologically confirmed from Tangshan Gongren Hospital (Tangshan, China) since 2008. Health controls without history of any cancer were recruited from health checkup examinations and matched to patients by frequency according to age (± 5 years) and gender. This study was approved by the Institutional Review Board of North China University of Science and Technology. Informed consent was obtained from each subject before participation in this study. Epidemiology data were collected by interview. After interview, 2 ml blood samples were collected from each participant and for further laboratory analysis.

Genomic DNA was extracted from peripheral blood samples using the TIANamp Blood DNA Kit (TIANGEN, Beijing, China). The genotype of CD55 rs2564978 T > C polymorphism was determined by polymerase chain reaction - restriction fragment length polymorphism (PCR-RFLP). A 101-bp DNA fragment containing CD55 rs2564978 site was amplified with the primer pairs of CD55F(5′-ATGAACAATGTTCACT CCCTACTGTGGTA-3′) and CD55R(5′-TAAGGAGGA AGGGCGTCATC-3′). PCR was performed in a 5 μl reaction mixtures containing 10ng of DNA, 0.1 μM of each primer and 1 × EsTaq PCR MasterMix (CWBIO, Beijing, China). The PCR profile consisted of an initial melting step of 3minutes at 94°C, followed by 30 cycles of 40 seconds at 94°C, 30 seconds at 61.5°C, 25 seconds at 72°C, and a final elongation step of 72°C for 3 minutes. PCR products were digested by Rsa I (New England Biolabs, Hitchin, UK). Genotyping was performed without knowledge of the case/control status. A 10% random sample was tested in duplicate by different persons, and all results were 100% concordant.

To verify whether the identified CD55 promoter polymorphism effects on the transcriptional activity of CD55, we constructed a reporter plasmid containing 1975bp fragment between -1438 bp to 526bp of CD55 promoter. The primers used for amplifying this CD55 promoter were 5′-GGGGTACCCCTCTCTATGAAGAAGGGCA-3′ and 5′-CCCAAGCTTGGGGACGGCGGGAACCACGAC-3′, in which the underlined bases represented KpnI and Hind III (NEB, MA, USA) cutting site. The PCR product was double digested with KpnI and Hind III and then inserted into the upstream of firefly luciferase reporter gene of the pGL3-basic (Promega, Madison, USA). The resulting construct was designated as pGL3-rs2564978C or pGL3-rs2564978T according to sequence result. We then use this rs2564978 C (or T)-containing vector to get another rs2564978 T (or C)-containing one by site-specific mutagenesis. Before cell transfection, the sequence of each construct was confirmed by direct sequencing.

Human lung cancer cells (A549, NCI-H2030 and NCI-H23) were supplied from Cobioer Biosciences (Cobioer, Nanjing, China). All cells were grown in RPMI 1640 medium supplemented with 10% fetal bovine serum (FBS) (GIBCO, NY, USA) and 1% of penicillin and streptomycin in a humidified environment at 37°C with 5% CO2. For transient transfection, 2 × 105 cells were seeded in 24-well culture plates to 60%–70% confluence. A549, NCI-H23 and NCI-2030 cells were transfected with 1ug firefly luciferase reporter plasmid by Lipofectamine 2000 (Invitrogen, CA, USA). Meanwhile, all plasmids were co-transfected with 10ng of pRL-SV40 plasmid (Promega, Madison, USA), which contained the Renilla luciferase gene as an internal control. The pGL3-Basic vector co-transfected with pRL-SV40 plasmid served as a control. Luciferase activity was determined using Luciferase reporter assay kit (Promega, Madison, USA) and measured in GloMax 20/20 luminometer (Promega, Madison, USA). For each plasmid construct, three independent transfection experiments were carried out, and each luciferase assay was performed in triplicate.

The differences in demographic variables and the distribution of genotype between patients and controls were tested by χ2 test. Hardy-Weinberg equilibrium (HWE) for CD55 rs2564978 C > T polymorphism in controls was evaluated using Pearson goodness-of-fit χ2 test. Unconditional logistic regression was used to analyze the associations of CD55 rs2564978 variant with the risk of lung cancer by odds ratio (OR) and their 95% confidence interval (95% CI) with adjustments for age, gender, and pack-year of smoking. Light and heavy smokers were categorized by using the 50th percentile pack-year (cigarettes per day/20) × (years smoked), with the value of the controls as the cutoff points (i.e., ≤ 30 and > 30 pack-years). Luciferase activity data were presented as mean ± standard deviation (SD) and tested by t test. All statistical analyses were performed using the SPSS version 17.0 (SPSS Inc, Chicago, IL). A P value of < 0.05 was regarded as statistically significant.

27. Kew RR, Ghebrehiwet B, Janoff A. Cigarette smoke can activate the alternative pathway of complement in vitro by modifying the third component of complement. J Clin Invest. 1985; 75:1000–1007.