Outcomes of surgery for gastric cancer with distant metastases: a retrospective study from the SEER database

Patients and methods: A total of 5185 patients from the SEER database who were initially diagnosed with histologically confirmed gastric cancer with distant metastases from 2004 to 2009 were included. Patients were divided into the following three groups: patients who underwent resection of both the primary tumor and distant metastatic tumors (‘PMTR’ group), patients who only underwent resection of the primary tumor (‘PTR’ group) and patients who did not undergo any surgery (‘No surgery’ group). We employed the Kaplan-Meier analysis, the log-rank test and multivariate Cox proportional hazards regression models to estimate the survival time of the different groups.

Conclusions: This retrospective analysis demonstrated that combined PTR and metastasectomy or PTR alone were independent prognostic factors for survival improvement in gastric cancer patients with distant metastases. Because no statistically significant difference in survival was observed between the ‘PMTR’ group and ‘PTR’ group, PTR, which is a more minor surgery, might be more appropriate than PMTR in clinical practice for gastric cancer patients with distant metastases.

Gastric cancer is the fourth most common type of cancer worldwide and is the second cause of cancer-related death globally [1]. In 2014, in the United States, the numbers of new cases and deaths from gastric adenocarcinoma were estimated to be 22,220 and 10,990, respectively [2, 3]. The incidence of gastric cancer is the second highest in China and is > 20 per 100,000 in men [4]. Because of early tumor detection, curative surgical resection and appropriate adjuvant therapy, the survival of patients with early primary gastric cancer has improved. In a previous study in Japan, the resection rate in patients with early primary gastric cancers was 95.4% and the 5-year survival rate of patients who underwent resection was 70.7% [5]. However, because of the atypical early symptoms, limited popularity of routine gastroscopy examination and other factors, 35% of patients present with evidence of distant metastases at the time of diagnosis [6].As a result, the treatment of gastric cancer patients with distant metastases remains poor. Although systemic chemotherapy with or without new molecular targeting agents is currently the standard treatment modality, the median survival time (MST) of gastric cancer patients with distant metastases is < 12 months and the 5-year survival is < 10% without surgical treatment [7, 8].

The Surveillance, Epidemiology, and End Results Program (SEER) database was sponsored by the National Cancer Institute. In the SEER database, information on cancer cases from 18 population-based cancer registries, which represent approximately 27.8% of the population in the United States, was collected. The database of the SEER program includes information on patient demographics, primary tumor site, tumor histology, stage at initial diagnosis, surgery, radiotherapy, and survival.

Table 1: The Characteristics of patients with gastric cancer with distant metastases 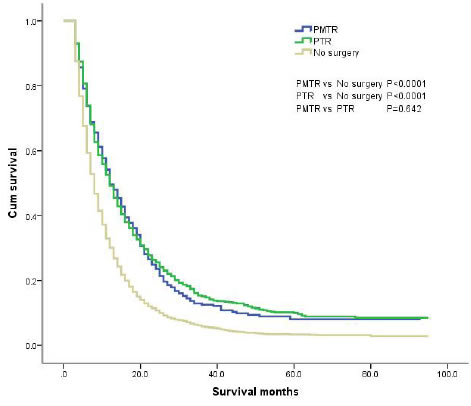 The superiority in the ‘PMTR’ and ‘PTR’ groups was completely diminished compared with the ‘No surgery’ group only in the subgroups that contained patients with well differentiated and undifferentiated tumors. Considering the far smaller number of patients who underwent surgery in these two subgroups, the results should be interpreted with caution.

Table 2: Survival rate(%) and MST(Months) of patients with gastric cancer with distant metastases

Figure 2: The survival curves of three groups in N-stage subgroups. A. N0-1 subgroup; B: N2-3 subgroup.

Recently, the opposite result was reported in the REGATTA randomized controlled trial [22]. REGATTA was an open-label, randomized, phase 3 trial with 44 participating centres and hospitals in Japan, South Korea, and Singapore. Patients aged 20-75 years old with advanced gastric cancer confined to either the liver (H1), peritoneum (P1), or para-aortic lymph nodes (16a1/b2) and who had a single non-curable factor were enrolled and randomly assigned (1:1) in each country to chemotherapy alone or gastrectomy (D1 lymphadenectomy) followed by chemotherapy. The overall survival at 2 years as the primary endpoint for all randomly assigned patients was 31.7% (95% CI 21.7-42.2) for those assigned to chemotherapy alone compared with 25.1% (16.2-34.9) for those assigned to gastrectomy plus chemotherapy. The median overall survival was 16.6 months (95% CI 13.7-19.8) for patients assigned to chemotherapy alone and 14.3 months (11.8-16.3) for those assigned to gastrectomy plus chemotherapy (hazard ratio 1.09, 95% CI 0.78-1.52; one-sided P = 0.70). Based on the result of this trial, compared with chemotherapy alone, resection of the primary tumor plus chemotherapy did not improve survival. In contrast to the aforementioned retrospective study, the majority of the enrolled patients in this trial experienced peritoneal metastasis (75%). This undesirable composition of the enrolled patients may have led to the negative result in this trial.

The results of the current study were similar to those described above. Compared with patients who did not undergo surgery, those who underwent PMTR or PTR experienced significant improvements in survival. Furthermore, in the subgroup analyses, with the exception of the N2-N3 stage subgroup, the factors of age, race, gender, tumor site, grade, histological type, T-stage, and radiation status did not influence the surgery-associated benefits seen in these patients. This may imply that patients with N2-N3 stage cancer would not benefit from surgery. However, no significant difference was found in terms of a survival benefit between the patients who underwent PMTR and those who underwent PTR. Additionally, in clinical practice, PMTR may lead to more treatment complications and risks. This suggests that, in the same cases, PTR may represent a better option compared with PMTR.

Thus far, many investigators have agreed that age, histological type, N-stage and radiation status were independent prognostic factors [16, 17, 18, 19, 20, 21]. In our study, using a multivariate analysis, we arrived at the same conclusions and found that surgery was an additional independent prognostic factor. This implied that compared with those who did not undergo surgery, patients who underwent surgery might obtain a survival benefit and experience a significant decrease in the risk of death. Similarly, younger patients, those with non-signet-ring cell adenocarcinoma, those with early N-stage cancers and those who received radiation therapy might be more likely to experience a survival benefit compared with other patients. In addition, younger patients and those who received radiation were more likely to benefit from PMTR. However, in the ‘PTR’ group, younger patients, those with early T-stage tumors, those with early N-stage tumors, and those who received radiation therapy were more prone to undergo PTR.

In conclusion, we sought to evaluate whether gastric cancer patients with distant metastases would benefit from surgery. The results showed that surgical treatment was able to improve effective survival time except patients with N2-N3 stage cancer. From the results of this study, we considered that patients who were younger and those with early stage primary tumors might obtain a greater survival benefit from surgical treatment than others. Additionally, radiation therapy may strengthen the survival benefit that is gained from surgical treatment. Furthermore, the improvements in the survival of patients who underwent PMTR and PTR were not statistically significant. As a result of more treatment complications and risks that are associated with PMTR in clinical practice, PTR may represent a better option for gastric cancer patients with distant metastases. Our study was a retrospective analysis with limitations and our conclusions should be further validated by a more prospective randomized trial.

This study was supported by Key Projects in the National Science and Technology Pillar Program during the Twelfth Five-year Plan Period, No. 2014BAI09B07 and by the Natural Science Foundation of Zhejiang Province, No.LY13H160019

All authors have declared no conflicting interests, including but not limited to, commercial, personal, political, intellectual, or religious interests related to the article.