Emerging evidence indicates that Retinoic acid receptor-β (RARβ) is a tumor suppressor in many types of tumor. However, whether or not RARβ is a risk factor and is correlated to clinicopathological characteristics of non-small cell lung cancer (NSCLC) remains unclear. In this report, we performed a meta-analysis to determine the effects of RARβ hypermethylation on the incidence of NSCLC and clinicopathological characteristics in human NSCLC patients. Final valuation and analysis of 1780 cancer patients from 16 eligible studies was performed. RARβ hypermethylation was found to be significantly higher in NSCLC than in normal lung tissue, the pooled OR from 7 studies including 646 NSCLC and 580 normal lung tissues, OR = 6.05, 95% CI = 3.56-10.25, p<0.00001. RARβ hypermethylation was significantly higher in adenocarcinoma (AC) compared to squamous cell carcinoma (SCC), pooled OR is 0.68 (95% CI = 0.52-0.89, p = 0.005). RARβ hypermethylation was also found to occur significantly higher in smoker (n = 232) than non-smoker (n = 213) (OR = 2.46, 95% CI = 1.54-3.93, p = 0.0002). Our results indicate that RARβ hypermethylation correlates well with an increased risk in NSCLC patients. RARβ geneinactivation caused by RARβ methylation contributes the NSCLC tumorigenesis and may serve as a potential risk factor, diagnostic marker and drug target of NSCLC.

Non-small cell lung carcinoma (NSCLC) consists of squamous cell carcinoma (SCC), adenocarcinoma (AC), large cell carcinoma and others. There are approximately 80% of NSCLC cases in later stage where the treatment and prognosis is far from satisfactory [1]. Thus, identification of the risk factors and diagnostic markers is still needed for the prevention and the diagnosis of NSCLC patients. Epigenetic alterations, particularly aber­rant DNA methylation, play a crucial role in cancer formation and progression [2-3]. Hypermethylation of CpG island in tumor suppressor gene promoter is a well-known and typical epigenetic changes in cancer [2-4]. Nowadays the assay of gene promoter hypermethylation has not only been recognized as a remarkable tool for diagnosis of cancer, but also a prognosis factor to predict the cancer risk in a variety of cancers including NSCLC [5].

Retinoic acid (RA) and its derivative, retinoid can bind its three retinoic acid receptors (RAR), RARα, RARβ and RARγ, are required for normal lung development [6-9]. Previous reports showed that RARβ was frequently epigenetically silenced in tumor progression, which demonstrated that RARβ belongs to a tumor suppressor protein [10-12]. RARβ gene mutation was not reported in NSCLC. The loss of coactivators, such as AF2 co-activators of the RAR-Thyroid Hormone Receptor complex are often lost in human lung cancer and the loss of AF-2 cofactors results in low levels of transcribed RARβ [13]. Silencing RARβ by promoter hypermethylation has been found as one mechanism that regulates alveolar and epithelial differentiation and lung tumorigenesis [14-15]. The hypermethylation of RARβ in NSCLC has been reported inconsistently [16-17], although some groups indeed found that the inactivation of the RARβ is caused by epigenetic progression, hypermethylation of RARβ gene in NSCLC [16-17]. In addition, it is not clear whether RARβ is associated with any clinical characteristics of NSCLC and predicts the risk of diseases. The discrepancy of the published data underpin the necessity to study the role of RARβ inactivation by gene promoter hypermethylation in NSCLC. Therefore, we perform an evaluation on the role of RARβ hypermethylation in lung tumorigenesis using a quantitative meta-analysis as well as a systematic review.

Sixteen publications which fitted into the inclusion criteria were collected into in this study. One hundred and ninety one publications were not included for the reasons such as in vivo animal work or in vitro cell culture model, non-original articles (review and editorial), or irrelevant publications. Figure 1 shows sixteen studies from 2004 to 2014 were included in the current meta-analysis. NSCLC patients from different countries such as China, South Korea, Japan, Finland, Australia, and USA was included and counted 1780 cases. Their demographic information and clinical parameters are formatted into Table 1. 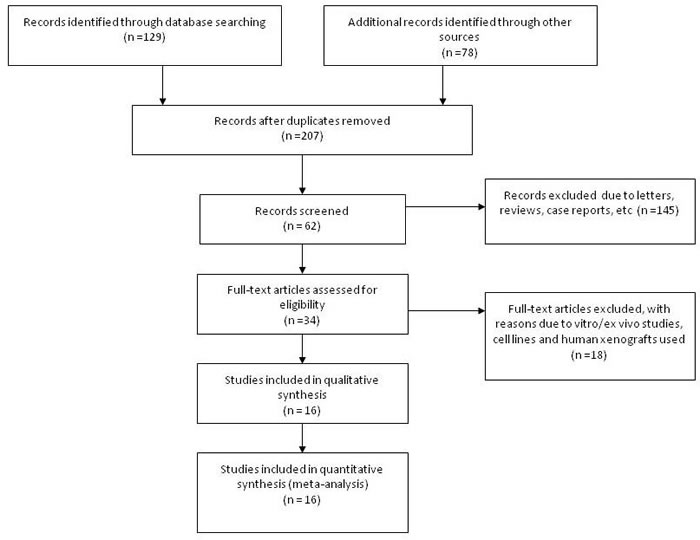 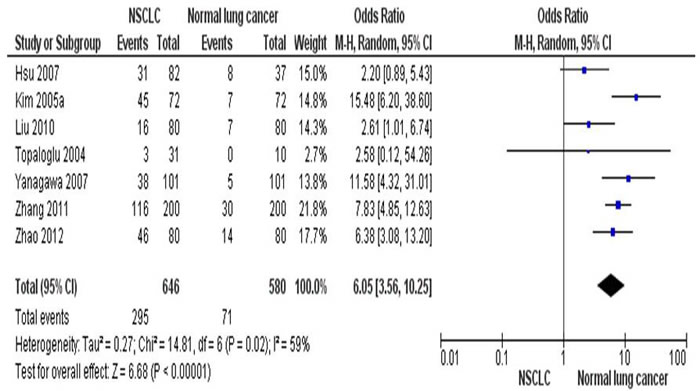 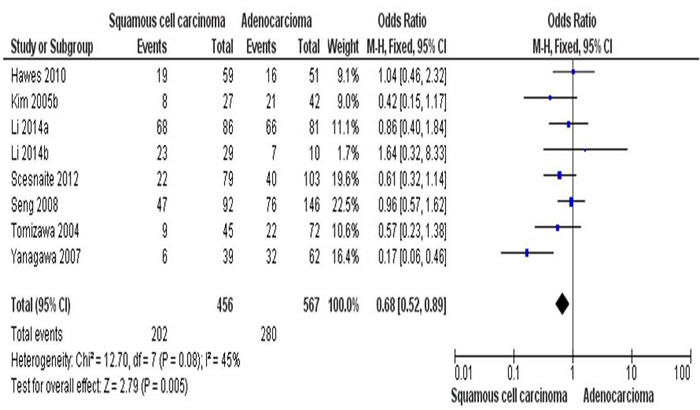 After analysis of combining estimates of the OR from 5 studies of 445 of NSCLC (Figure 4), the rate of hypermethylation of RARβ was detected significantly higher in smoker (n = 232) than non-smoker (n = 213) (OR = 2.46, 95% CI = 1.54-3.93, p = 0.0002). This indicates that RARβ conveyed the positive association for promoter hypermethylation when comparing NSCLC smoker and NSCLC non-smoker. 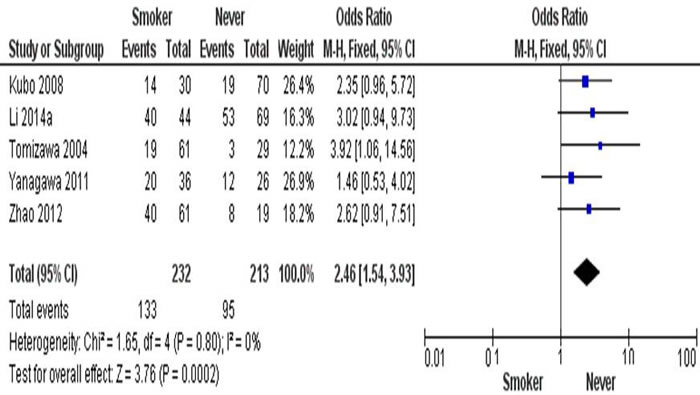 Finally we removed one study at a time to calculate the sensitivity which is a sign of the analysis result stability. Neither the pooled ORs nor HRs were extremely altered, demonstrating the acceptable stability of the results. The symmetrical funnel plots as shown in Figure 5A-5C imply no publication biases exist in the current study. 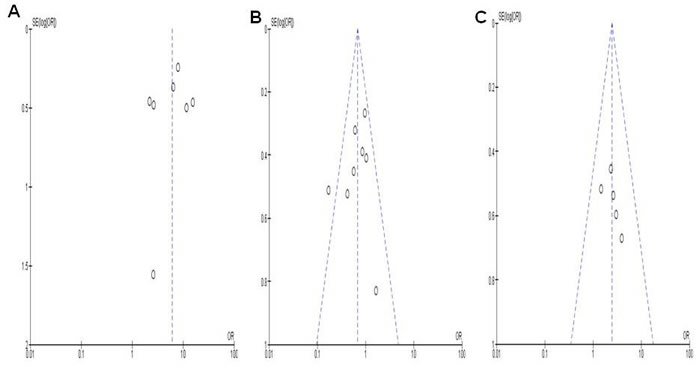 DNA methylation is an epigenetic mechanism that carried out by specific enzymes, the DNA methyltransferase enzymes [18-19]. In Eucaryotes, only cytosine belonging to CG dinucleotides, also named CpG in the 5′ position can be methylated, leading to the formation of 5-methylcytosine and are distributed in promoter regions of genes [20-21]. Just similar to other tumor suppressor genes, the CpG islands of RARβ promoter are easily hypermethylated in malignant cells. Gene hypermethylation usually represses its transcription and plays an important role in the gene regulation. The RARβ gene expression can cause RA-dependent and RA-independent apoptosis and growth arrest, which is mediated through RARα [22-23]. RARβ protein results in the expression of a number of its target genes that mediate cell differentiation and death [10, 24-25]. RARβ is epigentically altered in many different kinds of human cancers. Inactivation of RARβ by promoter hypermethylation contributes significantly to tumorigenesis of a variety of cancers including NSCLC [26-32]. Several groups have studied RARβ methylation status in NSCLC; but the lack of systemic and quantitative analysis of methylation of RARβ in NSCLC and its relationship with the clinical parameters really hampers the appreciation of mechanism of lung cancer as well as the development of novel tools for diagnosis and treatment of NSCLC patients. Analysis of the pooled data showed that there was a higher RARβ hypermethylation in NSCLC patients when compared to normal lung tissue, indicating that RARβ hypermethylation is risk factor in the carcinogenesis of NSCLC. RARβ hypermethylation was also found to correlated with pathological types, as well as smoking status. Our findings that NSCLC patients have high frequencies of RARβ gene promoter methylation compared to the normal lung tissues, indicating that the detection of RARβ hypermethylation may provide a practical diagnostic marker for NSCLC patients. Unlike genetic changes, the reversible epigenetic modifications in RARβ gene by methylation can be demethylated and therefore would be pratical to inhibit or delay carcinogenesis. Epigenetically silenced RARβ has been shown to be re-expressed in the presence of histone deacetylase (HDAC) inhibitors and DNA methyltransferase inhibitors (DNMT) inhibitors in RARβ2 silent cancer cells [33]. Treatment with 9-cis RA and an HDAC inhibitor showed effective in a cancer xenografts [34]. Four lung tumor lines treated with 5-aza-2’-deoxycytidine, restored RARβ expression and resulted in decreased tumorigenicity [15]. In addition, curcumin can increase RARβ expression at the mRNA and protein levels in lung cancer A549 and H460 cells, indicating that curcumin is able to inhibit RARβ promoter methylation [35]. The clinical trials have shown the therapeutic potential by reactivation of tumor suppressor expression and may shed light on cancer treat­ment through gene-targeted therapy.

A number of studies detected and compared the different rate of RARβ hypermethylation; however, the results were contradictory due to limited number of patients from AC and SCC [36-37]. The combining estimates of the odds ratio from 8 publication having 456 SCC and 567 AC is OR = 0.68, 95% CI = 0.52-0.89, p = 0.005, which shows the rate of RARβ hypermethylation was higher in AC than in SCC. In addition, studies have also reported a correlation between DNA methylation and tobacco carcinogens [38-42]. The combining estimates of the odds ratio from 5 studies having 232 and 213 NSCLC with and without smoking history is OR = 2.46, 95% CI = 1.54-3.93, p = 0.0002, shows RARβ hypermethylation significantly increased in smoking NSCLC patients compared to non-smoking NSCLC.

Publication bias did not exist after sensitivity analyses. However the study has several potential restrictions for some reasons. The language was limited to articles published in English. Publications in other languages were exluded due to unavailability of accurate medical translation. In addition, the selection biases could be possibly existed due to observational studies. Cancer cells may silence or repress RARβ by mechanisms other than hypermethylation in NSCLC in order to initiate and promote their growth and resist treatment with RA. Therefore, cautions should be taken when our results are extrapolated to the general populations.

Taken together, our analysis showed a higher RARβ hypermethylation in NSCLC than normal lung tissues, higher in AC than in SCC, and higher in smokers than in non-smokers. RARβ promoter hypermethylation, which inactivated RARβ gene, may significantly contribute to the carcinogenesis and serve as a potential drug target and diagnostic marker for NSCLC patients.

The database of Pubmed, Embase, and ISI web of knowledge were searched for publications from May 1, 1998 to December 2015 by the key words: “lung” and “cancer or tumor or neoplasm or carcinoma”, “methylation”, and “RARβ or retinoic acid receptor-β or NR1B2”. In addition, the author bibliographies were also searched manually from the retrieved publications for additional papers.

After withdraw of irrelevant and/or repeated publications from various resources, the remaining papers in the full text were evaluated for selection according to inclusion and exclusion criteria. All searched papers were retrieved. The cited references of selected studies were also determined for other relevant studies. Only one complete study was selected if same patient populations were repeatedly reported.

The inclusion criteria for eligibility include: (1) RARβ hypermethylation was determined in the lung tissues of primary NSCLC patients, (2) RARβ promoter hypermethylation was detected by polymerase chain reaction (PCR), (3) the data provided the information on both status of RARβ hypermethylation as well as clinicopathological indexes of the NSCLC patients (4) the statistic information was given such as individual hazard ratio (HR) of overall survival (OS) and 95 % confidence interval (CI). However, the Letters, reviews, case reports, conference abstracts, editorials, expert opinion, and all research which are involved in vitro/ex vivo studies were not included.

We reviewed the following information in each eligible study, authorship, time of publication, sample collection, case numbers, clinicopathological information, the techniques used to calculate gene promoter methylation, methylation frequences and/or gene product expression, and the process of follow-up. Disagreements between the analyzers were fully discussed until come to an agreement. Demographic data and clinical responses were formatted into a table. Heterogeneity of study was calculated to determine if the dataset were suitable for a meta-analysis.

The methodology of each study was evaluated and scored based on the REMARK and ELCWP guidelines [43-44].

Analysis was performed by the softwares of STATA 12.0 (Stata Corporation, TX, USA) and Review Manager 5.2 (Cochrane Collaboration, Oxford, UK). The pooled ratios of RARβ promoter hypermethylation and 95% confidence intervals (95% CI) were calculated. The frequency of RARβ hypermethylation was analyzed and correlated to various tumor phenotypes. Heterogeneity among studies was calculated by Cochran’s Q test [45] which showed by the I2[46-47]. When heterogeneity did not exist (I2 values < 50%), a fixed effect model was utilized. On the contrary, a random-effects model was utilized to pool individual data together. In addition, potential sources of heterogeneity were identified by further subgroup analyses. The existence of an association between RARβ promoter hypermethylation and clinicopathological indexes were determined by a pooled OR. P values less than 0.05 was considered significant level.